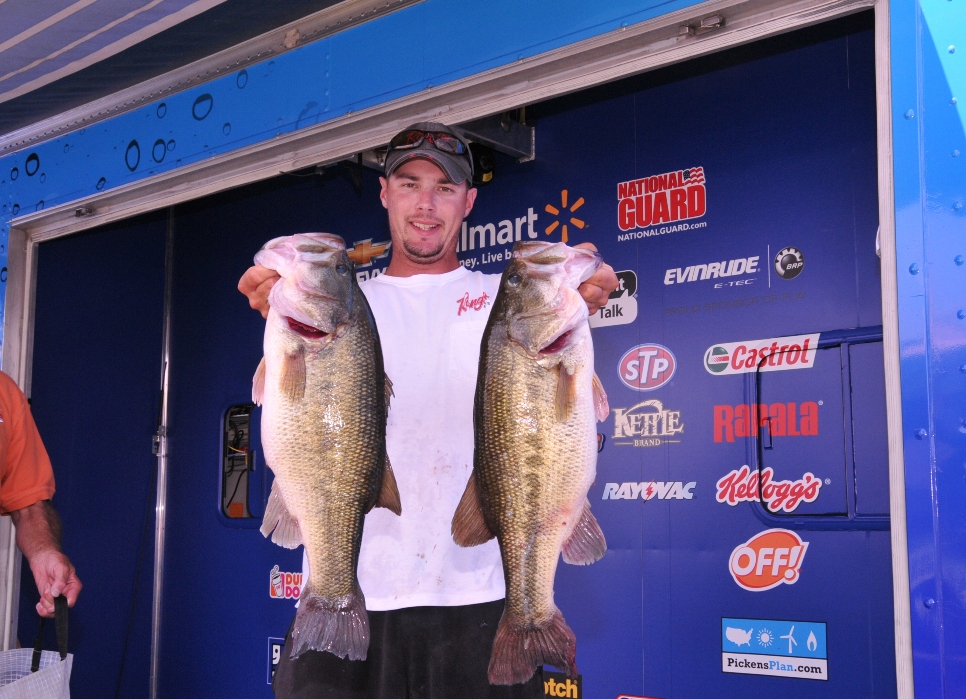 GUNTERSVILLE, Ala. – Many times in EverStart Series events, day one will feature big weights, but day two will slow up considerably, mainly due to fishing pressure.

That cannot be said for the EverStart Series Event going on a Lake Guntersville this week. In short, the hits just keep coming – hits in the form of giant bags of bass.

There was even one limit that topped the 30-pound mark – 30 pounds, 2 ounces to be exact. That limit belonged to Alex Davis of Albertville, Ala., who now leads the event with an astounding 54 pounds, 11 ounces.

While many in the top five are fishing deep – in the 18 to 35 feet deep range – Davis says he is fishing grass. He does say he has flirted with deeper haunts and it has added to his creel, but most of his fishing involves a run and gun pattern in G-ville’s grass beds with topwaters and a big worm.

I really got lucky with a couple of big bites today,” Davis said. “I’m not committed deep. I do have a deep place or two that I’m fishing, but a vast majority of my spots are in the grass and they just bit well today. Instead of having to run a lot of spots like I did yesterday to get a bite here and a bite there, I was able to catch multiple good fish off areas and that let me settle down and fish.”

Davis said his two best lures have been a Strike King Spittin’ King topwater and Big Iguana 10-inch worm in the grass. 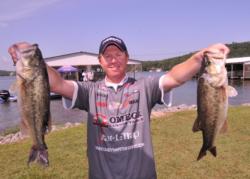 Casey Martin of New Market, Ala., still holds down the second place spot with 50 pounds, 9 ounces.

Martin is fishing to 25 feet deep with a variety of lures.

“I’m really mixing it up,” Martin said. “I’m using an Alabama rig, a crankbait, a spoon and today I caught a big one on a football jig.”

“I’ve got one deep spot that I have not seen another boat on,” Martin added. “I just tickled it today, caught a couple of good ones and my co-angler got 20 pounds off it in no time. So I’ll probably sit on that place tomorrow to really see what’s there.”

Rick Cotten of Guntersville, Ala., is in third place with 49 pounds, 6 ounces.

Cotten, too, is playing the deep game with his boat sitting in 32 feet and casting to about 16 feet.

“I caught less fish today, but the quality is still there,” Cotten said. “I’m rotating between an Alabama rig, a swimbait, a crankbait and a jig. I have about 10 different places I’ve been fishing the last two days and I’ve saved a few for tomorrow that I have not been to yet. I don’t know if any one else has fished these places, but we’ll find out tomorrow.”

JT Kenney of Palm Bay, Fla., is in fourth place with 49 pounds even.

Kenney is making his living out deep at Guntersville as well, catching bass from 19 to 35 feet deep at times.

“I’ve been using an Alabama Rig and a cranking plug,” Kenney said. “There’s one spot where several of the leaders are fishing and it’s just got a bunch of fish on it. Hopefully it will hold up for another day.”

Richard Peek of Centre, Ala., is in fifth place with 48 pounds, 10 ounces.

Peek is also playing the deep game and it paid off with the big bass of the day in the Pro Division weighing 7 pounds, 12 ounces.

Rounding out the top-10 pros in the EverStart Series event on Lake Guntersville after day two: 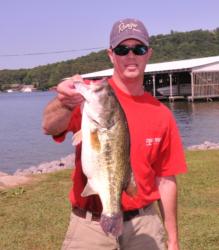 Justin Sward of Birmingham, Ala., leads the Co-angler Division with a two-day total of 40 pounds, 3 ounces.

Jason Atkins of Section, Ala., is in second place with a two-day total of 35 pounds, 11 ounces.

Ed Shannon of Milford, Ohio, is in third place with a two-day total of 32 pounds, 6 ounces.

Josh Mims of Clanton, Ala., is in fourth place with a two-day total of 31 pounds, 9 ounces.

James Bobbitt of Rainbow City, Ala., is in fifth place with a two-day total of 30 pounds, 14 ounces.