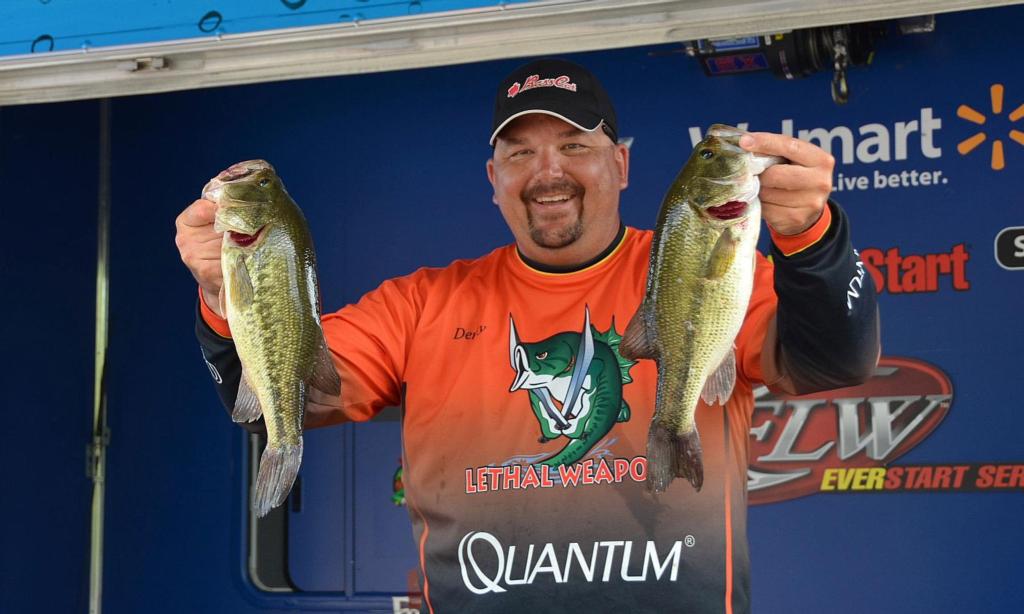 LA CROSSE, Wis. – While many of the day-one leaders had a difficult time duplicating their day-one stringer, Denny Rhead did not. In fact, the Elmwood, Wis., native said the dropping water actually helped his bite. As soon as he crossed the 9-pound mark, he left his key area, hoping it would replenish for the final day of EverStart Series competition.

Rhead started day two on the Mississippi by locking up to Pool 7. After running to the top of Pool 7, he was disappointed to find his area full of dogfish (bowfin) and northern pike. Once he locked back down and returned to the area he caught them on day one, it was game on.

“I really have two key areas and they’re both very shallow,” explained Rhead. “I start on a wood spot; it’s basically submerged stumps and lay-downs. That’s been good because the shad are relating to the wood. But my main pattern is frogging a 2-acre stretch of slop.”

While Rhead said the bite was good, he’s not culling through huge quantities like many of the other 10 finalists. He’s getting approximately a dozen bites per day and all he needs to win the tournament is three more good ones. His three-bass limit Friday weighed 9 pounds, 5 ounces, bringing his total weight 20 pounds, 6 ounces.

“It’s a big deal to be leading, even if it is just 6 ounces. I didn’t think 20 pounds would be leading this thing, but these fish have been pressured for a week straight. All I’m looking for is three big bites tomorrow. I know there’s more in there; I just hope they’re quality. I did miss a 5-pounder yesterday that swiped at it but never got the hooks.”

Rhead won the $1,000 Evinrude contingency award at the Great Lakes Division BFL earlier this year on the Mississippi River. That extra $1,000, which convinced him to enter this event, could offer a major return if he seals the deal tomorrow. 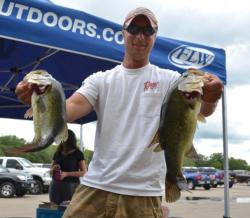 Local angler Dan McGarry has won a pair of BFLs on his home water, but he’s in position to win a much bigger tournament tomorrow. After sacking 10-1 yesterday, McGarry caught a steady 9-15 to finish the opening round with 20 pounds even.

“It was tougher on me today; I definitely got more bites yesterday,” said the Tomah, Wis., native. “I think I only culled two or three times. Yesterday I caught about 15 keepers and was throwing back 3-1s and 3-3s.”

“I basically swim that jig through grass flats. The flat itself is like 4-feet deep, but the key is that there are shad in there. I’ve been real consistent and I’m pleased with that, but I haven’t gotten that really big bite. So who knows; I do think I’m around them.”

Although his weight decreased slightly, Shane Long moved up from sixth to third. His official day-two weight was 9 pounds, 10 ounces, giving him an opening round total of 19 pounds, 13 ounces. 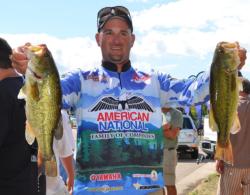 “I’m pitching a 1/2-ounce black and blue Luck-E-Strike jig with a Zoom Twin Tail grub to mud banks,” said the Springfield, Mo., pro, who is fishing Pool 8. “I can actually see the holes where the crawdads come out of the mud and that’s right where I catch `em. It’s anywhere from 6 inches to 6 feet of water.”

Long said his day-two stringer was looking light until a late kicker caught off a rock pile saved him.

“I caught probably 15 today and a dozen yesterday, but the quality just dropped off a little bit. My main concern is that I haven’t caught a fish over 4 pounds since I’ve been here. But I’m very confident I can catch 8 1/2 pounds.”

Long broke off a giant smallmouth on 20-pound fluorocarbon yesterday and is hoping that fish won’t cost him the tournament.

“I will say that these fish are not bashful. If you get it by one, they’re going to bite it.” 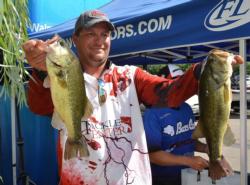 Arkansas pro Zach King rose from fifth to fourth after catching three bass worth 9 pounds, 4 ounces. King finished the opening round with a total weight of 19 pounds, 9 ounces.

“I did the same thing as yesterday; I’m flipping a Yum F2 tube (black and red color),” he said. “The river dropped several inches so I fished the backside instead of the front side.”

King reportedly caught 60 or 70 fish, even more than yesterday, and is gaining confidence.

“This is just like my home lake (Dardanelle). I feel good; I feel like I’ve got a chance. This could be the winning deal.”

After making the cut, King will leave La Crosse as the Strike King Angler of the Year leader in the Central Division. 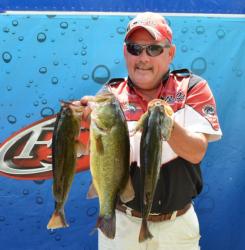 Kevin Johnson caught a 10-pound, 5-ounce limit Friday and rallied to fifth with a two-day total of 19 pounds, 8 ounces.

“Yesterday I had my limit in 15 minutes and today it really took all day,” said the Sparta, Wis., pro. “I had a limit, but I culled all my fish in the last hour and a half.”

Johnson had been catching his fish twitching a frog on top, but he was forced to change his pattern. Because the water dropped several inches, he wasn’t able to access some of his better water.

“Today they were just swiping and swatting at the frog. I’m glad I switched it up.

“I fish a lot of the BFLs and I’ve been struggling the past year and a half. So this is a pleasant surprise.”

Rounding out the top-10 pro leaders at the EverStart Series Mississippi River event:

Rick Krassinger overtook the lead in the Co-angler Division after catching a three-bass limit Friday worth 9 pounds, 7 ounces. Combined with his 8-5 from day one, the House Springs, Mo., native has a total weight of 17 pounds, 12 ounces. Krassinger was paired with FLW Tour pro Robbie Dodson on day two.

Like King in the Pro Division, Krassinger will leave La Crosse as the Strike King Angler of the Year 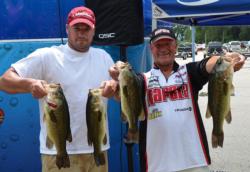 Randy Warner of Elmwood, Ill., finished the opening round second with 17-10. Local Onalaska, Wis., fisherman Jamie Gomez also has 17-10, while Richard Conrad slipped to fourth with a total weight of 17-1. Jason Ferge of Markesan, Wis., rounds out the top five with 16-12.

Rounding out the top-10 co-angler leaders at the EverStart Series Mississippi River event: