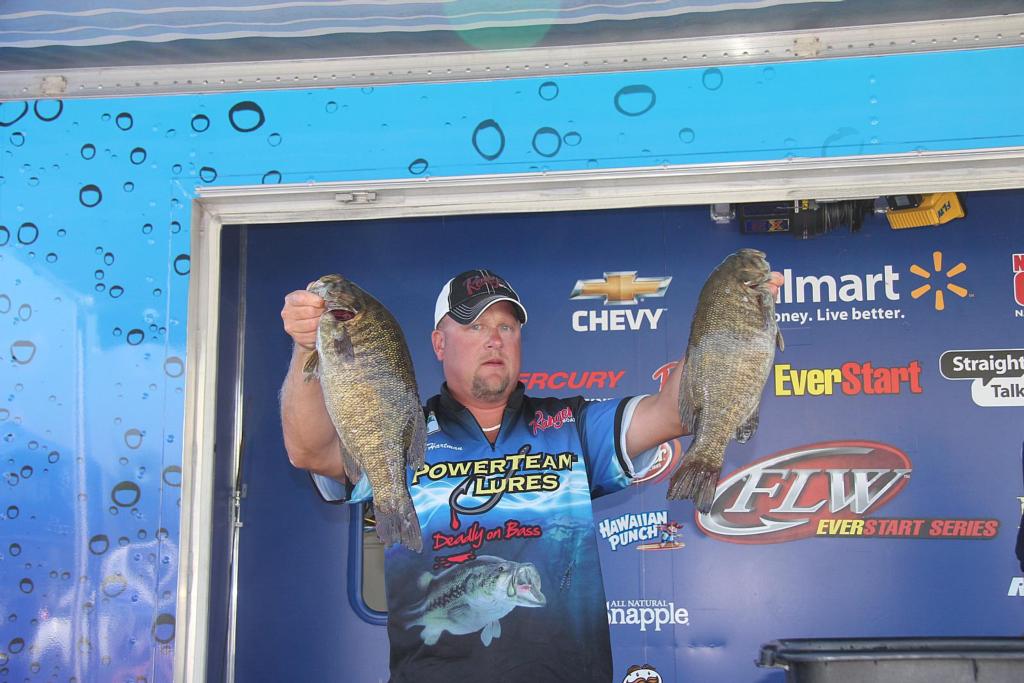 CLAYTON, N.Y. – It’s known for big smallmouth – lots of them – and the 1000 Islands region did not disappoint in the opening round of EverStart Northern Division action.

Eighty-eight pros and 46 co-anglers bagged limits, the top 10 had 20 pounds or better and smallies of 4-plus were flying across the stage like exaggerations at a presidential debate. Fives were not uncommon and the most notable stat of the day came from New York pro Matthew Martin, who placed 88th with a 3-fish bag that weighed 10 pounds, 8 ounces, but included the Snickers Big Bass – a chunky brown fish that went 5-8.

Also interesting is the tight spread atop the leaderboard. Two pounds, 7 ounces separates first from tenth and there’s only a pound difference between the No. 1 and No. 5 positions. Drilling deeper, we find a single ounce separating second from third, as well as third from fourth.

Today’s strong showing was no surprise, given the clear, calm conditions that allowed anglers to run 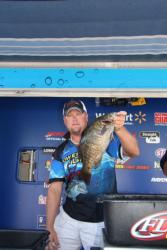 wherever they desired on a relatively calm Lake Ontario. Now, that won’t be the case when tomorrow’s forecasted winds of 15-20 mph deliver the bill for today’s little piscatorial shindig. Needless to say, those who got ’em today are happy they did. The fish are going to bite tomorrow too, but getting to one’s spots and holding on said locations will likely prove challenging.

Jamie Hartman, of Newport, N.Y. leads the show with 22-7. He spent his day in the St. Lawrence River and actually found today’s calmness to be somewhat of a liability. He fished a dropshot and used a creeping presentation to get the job done.

“I kept the cadence really, really slow because they were very picky today,” he said. “I think it was just the slick weather. I was fishing really slick water and there was high, bright sun. They would eat, but you just had to figure them out.”

Hartman caught his fish on a dropshot with an undisclosed worm. He elected to fish the river, essentially, as a time-management plan. 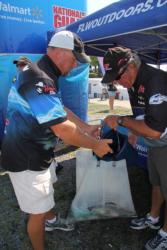 “I put three days of practice into the lake and got a big bag each day, but it was too much work, too much time to catch them,” Hartman said. “I knew I had them good in the river – that’s my comfort zone.”

Fishing about 40 miles from the lake, Hartman targeted breaks and rock piles in 15-52 feet. He downsized his line to 8-pound fluorocarbon in an effort to tempt the bigger bites. The plan obviously worked, but not without a cost.

“It cost me two big fish,” Hartman said. “I should have had upwards of 24 pounds. But that’s how you get the bites – small rig, small hook and a pretty decent size weight.”

Hartman leads the pro field by just 8 ounces, so to maintain his position he’ll have to deliver again on day two. Good thing for him is that he’s established a river game that he can return to when day two finds Lake Ontario most unkind to those who venture outside the St. Lawrence.

Bob Izumi, of Milton, Ont., won this event in 2011 – his first U.S. victory – and the Canadian fishing legend is on track to turn in another strong performance this year. Izumi sits in second with 21-15 and 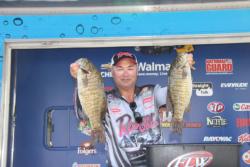 not surprisingly, he caught his fish on a dropshot with Berkley Gulp baits.

“I put my partner onto the Gulp too because he wasn’t getting any on his plastic baits and he ended up catching 18 pounds, so overall it was a pretty good day,” Izumi said. “We didn’t get a lot of numbers; I probably caught 15 fish today, I threw back a few pretty nice ones and didn’t lose any fish. When you have a day when you don’t lose any you can’t complain.”

Izumi said that he and his partner caught fish in 18-40 feet of water. Four of their biggest fish on one particular break that held several nice fish and both anglers capitalized on the opportunities.

“I was culling and I said ‘drop down’ because I saw the fish on my graph, and bang – he gets a 5-pounder,” Izumi recalled. “Then a few minutes later, I said ‘There’s another one,’ and he drops down and gets a 4-12.

“Today, there was no key depth – we caught them in a variety of depths. It was just a matter of moving around and marking them on the graph and catching them. It’s going to be a little different tomorrow with all that wind.” 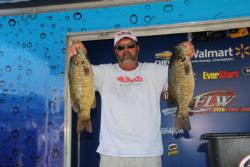 When Bill Chapman left the previous Northern Division event at Lake Champlain a few weeks ago, he was really feeling the effects of two very windy days. This week, he decided to give his back a break (as in “rest”) and fish the calmer waters of the St. Lawrence where he could fish for green and brown fish and take the best of the bunch.

“I got beaten up so bad at Champlain that I decided I was not going out in that lake, so I spent all my time practicing in the river,” he said. “I started out on largemouth and had a limit by 7:15 and I thought I had culled them all out, but I got here and I had one left, so that cost me a pound to a pound and a half.”

Chapman caught his largemouth while flipping a beaver in shallow reeds. After that, he transitioned to smallies and caught four big keepers on a break that went from 25 to 40 feet.

“I found a really good drop in practice,” he said. “They sit out off the drop and every once in a while they’ll run up and feed and you can catch them when they do that.”

Chapman’s limit catch of 21-14 puts him in third place.

Magee an ounce back at fourth

Trailing Chapman with 21-13 is Jeff Magee, of Yarker, Ont. He caught his bag of browns on a Set the 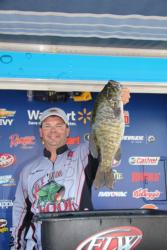 Hook tube (Star Wars color) and a dropshot with a Set the Hook Stumpy Crush Worm (goby). Light biting bass gave him fits, but once he developed a feel for the day’s disposition, he salvaged enough of his opportunities to build a strong limit.

“They wouldn’t bite today, so I had to basically lay it there and crawl it along,” Magee said. “They were picking it up and it felt like a goby so I missed a lot of fish. They were getting skin-hooked and they were coming off like crazy. The ones I caught, I set the hook on (what felt like) a goby and it was a smallmouth. That’s when I clued in that they were biting light.”

Magee found the fish moving up and down on the structure he fished. He ended up catching his weight on a shoal in 13-20 feet near Gallo Island. 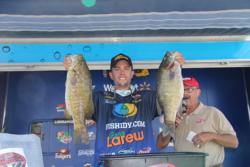 One of the early pros to weigh, Trevor Knight, of Magnolia, Del. launched the big bass bombardment with his fifth-place bag that weighed 21-7. Fishing the lake, his opportunities were few, but he found himself on the right side of the quantity-quality equation.

“I only had seven or eight bites all day, but they were good ones,” he said. “I just had to wait for when the fish came by the contact spot where they were just cruising by and about every hour or so I’d get a bite.”

Knight caught his fish on a break from 27 to 30 feet with a washout behind it. He got all of his fish on dropshots.

Stephen Kocell, of Waxhaw, N.C. and James Mignanelli, of Harmony, Penn. sacked up equal limits of 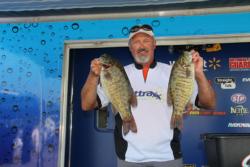 18-10 to share the co-angler lead on day one. Kocell caught his fish on a dropshot with black Berkley leeches. He used a 1/2-ounce weight to fire his rig down to the fish over main lake rock piles in 18-25 feet.

“A wacky worm worked well in practice but I watched my (pro partner) catch three fish and I didn’t have anything, so I went to the dropshot and caught up,” Kocell said. “I stuck my neck out and went with 6-pound fluorocarbon and let the drags do what they have to do.”

Mignanelli also fished a dropshot, but he used Case Plastics worms with the tails dipped in Spike-It. As the day went on, he found that he needed to change colors to continue getting bites. Early on, a green pumpkin bait produced, but in the afternoon, he switched to a clear worm. 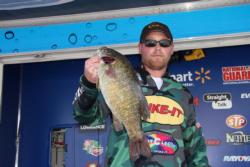