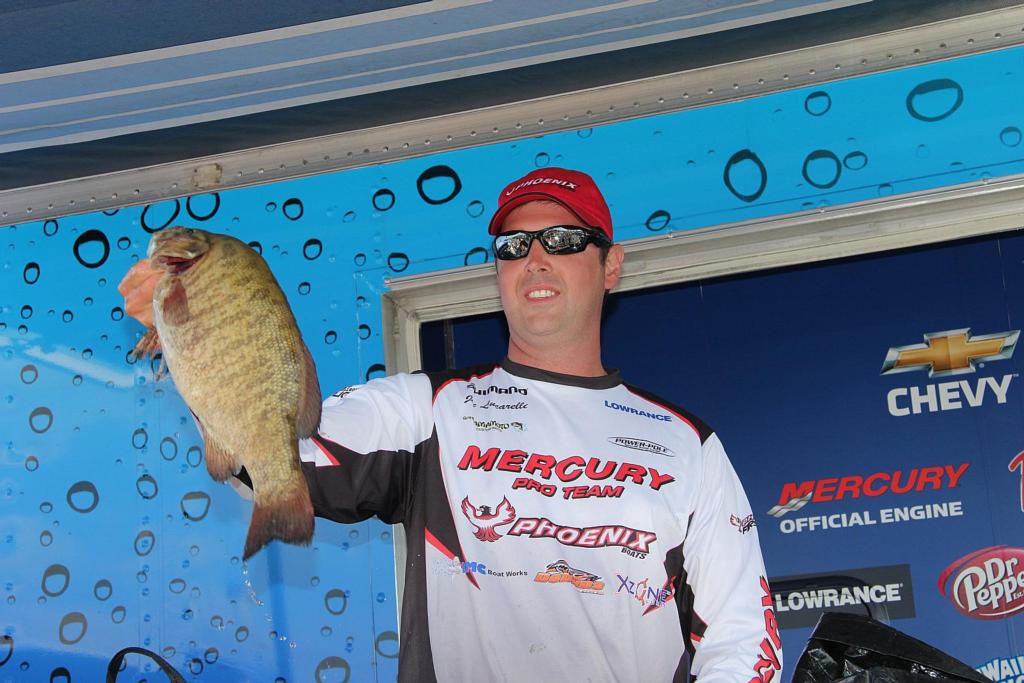 CLAYTON, N.Y. – About this time last year, New Hampshire pro Joe Lucarelli told the weigh-in crowd that he wanted to go home and forget about the 1000 Islands. Good thing he didn’t really let the bitter pill of a 75th-place finish obscure his memory; otherwise, he wouldn’t have left the 2012 EverStart Series Northern Division event with the first-place trophy.

Lucarelli got off to a good start on day one by placing 13th with 19-6. He’d follow a day later with his first of two bags over 20 – this one a limit that weighed 21-15 and moved him up to third place. In the final round, Lucarelli turned in his best performance and weighed a bulging bag of smallmouths that went 22-8 (second-largest of the event) and pushed his aggregate to a tournament-winning total of 63-13.

“It feels great to win this (after my 2011 disappointment),” Lucarelli said. “This fishery keeps getting 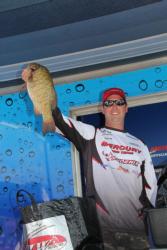 better and better. I’ve been coming here for about 10 years and I remember when we used to be able to come here and catch 17-18 pounds and it really meant something. You wouldn’t be (in the top-10) if you caught 17 or 18 pounds.”

Lucarelli spent all but a fraction of his tournament time in the St. Lawrence River – actually less than a mile from the take-off site in French Creek. The river certainly saw its share of rough water, with the usual flow of 1000 Islands traffic plus the practice and competition days for an antique speedboat race out of Clayton. However, Lucarelli fared much better than those who committed to fishing the big waters of Lake Ontario. The Great Lake was fairly hospitable on day one, but the second day saw the lake’s mean face when a passing cool front brought strong southwest winds and big – make that huge – waves. Winds were a little lower on day three, but the lake was still pretty sporty.

Notably, the weather wasn’t the sole motivation for Lucarelli’s game plan. Sure, he was very clear about his disinterest in slamming around in the gear-busting bull ride that is an angry Lake Ontario. Nevertheless, he said he was motivated to learn a game that he had been hearing about for quite some time – smallies in the river. While the common generalization might suggest that you fish the lake for brown fish and the river for those green sissies known as largemouths, the St. Lawrence is actually bursting with big, fat, aggressive smallmouths. 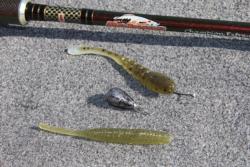 “I’ve been coming here for years and I was always able to put together one good day and then weather would dictate what I was able to do,” Lucarelli said. “I’d always fight it, but it was miserable. There are too many variables going against you. I told myself ‘I have to learn this river.’ I spent countless hours driving and just looking at my Lowrance Sidescan and found some key spots about a half mile from where we took off.”

Although Lucarelli caught one of his day-three keepers on a rocky spot just outside the mouth of the St. Lawrence, technically in the lake, he spent the majority of his time fishing a large flat with scattered rock formations and caught his fish in 32 to 47 feet of water. Current was key and Lucarelli said that while monitoring his Lowrance HDS-10, he could just about predict the fish’s disposition based on where he observed them positioning. Essentially, smallmouths sitting on the back side of a current break were not as aggressive as those sitting out front, boldly braving the swift water to maximize the feeding opportunities therein. Also, daily conditions influenced fish positioning.

“When the current was slow, the fish didn’t need the 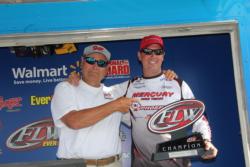 structure as much so I’d catch them out roaming. But when the current was ripping with that big wind on day two a little more today, they needed those current breaks and I could just about call my shots.

Lucarelli caught all of his fish on drop-shots. He alternated between an X-Zone Slammer and a Yamamoto Shad Shape Worm. Lucarelli varied his drop-shot weight based on depth and he adjusted his color as the sky conditions changed – darker during cloudy conditions; lighter for sunny times. Most effective, he said, was a Slammer designed to impersonate gobies – those invasive bottom dwellers loathed by Great Lakes biologists but loved by smallmouth bass.

“My favorite color (in the Slammer) was a No. 309 – it’s a green pumpkin/watermelon mix with a blue inlay,” Lucarelli explained. “You can’t get a better color to imitate a goby than that – it’s perfect. The smallmouth absolutely can’t stand it.” 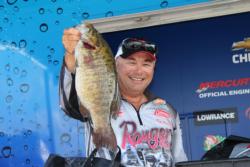 Bob Izumi, of Milton, Ontario, also brought memories of 2011 into this year’s event, but he was hoping for a repeat of his come-from-behind victory. Capping day three with his best performance of the tournament – a 22-pound, 7-ounce bag – Izumi came within 14 ounces of another title, but ended with a second-place finish and a three-day total of 62-15.

Izumi caught his fish by drop-shotting several different Berkley Gulp baits over hard bottom structure in Lake Ontario. Despite a strong finish and two days of 20-plus pounds (also 21-15 on day one and 18-9 day two), Izumi said that he had to cover lots of water to find his daily limits.

“These fish have passports for both (the U.S. and Canada),” he joked of his extensive running time. “I gave my co-angler quite a boat ride today and I had to put $100 (in fuel) into my boat midway through the day. I think I hit every spot I’ve fished in the last 30 years on this lake.”

When a fisherman brings in a bag better than his previous day’s weight, EverStart Tournament 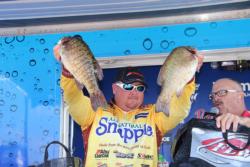 Director Ron Lappin often jokingly says “You got mad at them today.” By that standard, Snapple pro Jacob Powroznik, must have been furious on day three, as the angler from Prince George, Va., sacked up the heaviest catch of the tournament – a limit that went 23-1 and pushed Powroznik up from eighth place to third with a three-day total of 62-3.

Powroznik placed 15th on day one with 18-12 and rose seven spots on day two with a limit of 20-6. He, too, fared best with a drop-shot, but it was some innovative thinking that enhanced his presentations.

“Up here (the locals) use these baits that are flat on the bottom,” Powroznik said. “The fish just wouldn’t bite my (Berkley goby) so I took a pair of scissors and cut it in half and it looked perfect. I used that until I ran out and then I just picked up a little Berkley worm and caught some. But I have to go to the tackle store and get some more Gulp because I’m out.”

Powroznik fished the river largely to avoid risking equipment damage prior to an FLW Tour event on the Detroit River following the 1000 Islands event. He said his St. Lawrence productivity was pleasantly surprising. “I didn’t think I could ever catch that in the river. I caught (almost) 21 pounds out there yesterday in 10 minutes. We took off this morning at 6:00 a.m. and at 6:23, I was culling 4-pounders.” 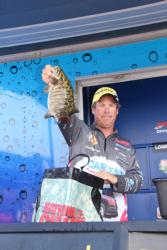 Day-two leader Derek Strub, of Elora, Ontario, turned in a solid day-three performance with a limit catch of 19-7, but with Lucarelli, Izumi and Powroznik stepping on the gas, he slipped a few spots to fourth. Adding in his 20-10 and 21-13 from days one and two, Strub tallied a tournament total of 61-14.

“It’s been funny; I just pulled one out of the hat,” the Lake Ontario veteran said. “I really wasn’t on much in practice. I’m fortunate enough that I have a lot of water here so every day I went a different direction and just went fishing each day.

“I was fortunate the first and second day to have a fish or two over 5-pounds and yesterday I had one almost 6. That’s really all I was missing today. If I cull a high 3 and put a 5 1/2 in there and I’d have my 21 1/2 again. But I’m really happy. To make that cut with this level of (competitors) is just a thrill for me.”

Throughout the tournament, Strub caught most his fish on dropshots baited with Trigger X Probe Worms and X-Zone Slammers. He also caught one on a jerkbait and another on a spinnerbait.

Jason Ober has a new favorite and another New York waterway might be a little jealous, but that’s just 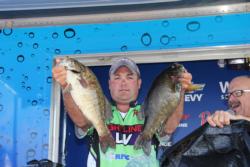 “This has been an amazing week for me,” Ober said. “Everyone who knows me knows that Lake Champlain is very near and dear to my heart, but I think it just got beat. This entire system from the lake to the river is fishing phenomenally. I cannot tell you how many 4-pound bass I’ve caught (this week), but it’s a bunch.”

Like most of his fellow competitors, Ober caught most of his fish on drop-shots – his baited with black Berkley Gulp leeches. He also caught one day-three keeper on a green pumpkin tube.