MARBURY, Md. – Propelled by more than a decade of fishing experience on the Potomac River, pro John Hutchins of Warrenton, Va., managed to hold onto first place in this week’s EverStart Series Northern Division contest for the second consecutive day. Bolstered by a 15-pound, 2-ounce catch, the second largest stringer of Friday’s contest, Hutchins now leads his closet competitor by almost 3 full pounds and appears to be in the driver’s seat for the EverStart title.

“I had another good day,” said Hutchins, who now boasts a total, two-day catch of 35 pounds, 9 ounces. “I feel pretty confident that if I can catch a few big bites tomorrow I can win this.”

However, it is Hutchins’ experience on the storied Washington D.C.-area waterway that has clearly given him the edge so far.

“I’ve fished the Potomac River for 10 years so I’m pretty comfortable here,” said Hutchins. “The conditions are always changing on the Potomac and you have to be prepared. I have 18 rods in my truck for just about any conditions. And I’ve learned that you have to have areas on both sides of the river in case the wind really starts to blow. If you only have one area that’s getting pounded by the wind, you can kiss that spot goodbye.”

While the wind didn’t blow today, tomorrow’s forecast is calling for potentially much windier conditions.

“That’s why you have to be versatile here,” he said. “Today, I went to my (primary) spot but couldn’t get on it so I had to scramble around and basically go junk fishing. I ran to a few different spots and it paid off. You really have to keep an open mind here. And a lot of that is instinctive.”

To underscore this point, Hutchins said that he has attacked the Potomac River in many different ways over the past two days.

“I caught the fish a lot differently than today,” he said. “I got more of a reaction bite today and got bit better in the grass today than yesterday. But on Thursday, I was fishing a lot more methodically. I was dragging plastics, fishing jigs and catching a lot more fish on hard cover. And with the conditions expected to change again tomorrow with the wind, I think it’s going to throw another wrench into (tournament strategy) for a lot of guys. So I’m just going to have to adjust.” 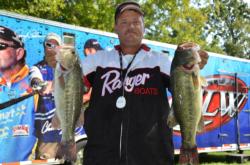 With another stellar catch under his belt, Walter “Mike” Snider of Mount Airy, Md., held onto the runner-up position for the second consecutive day. Boating a total catch of 32 pounds, 12 ounces, including a 15-pound, 1-ounce catch in today’s competition, Snider continues to remain right on the heels of Hutchins.

“I feel pretty good,” said Snider. “And I think I can catch another 15 pounds again tomorrow.”

However, Snider acknowledged that he’s worried about the tide charts.

“I need a lower tide because my good spots are lower-tide spots,” he said. “When the tide comes in the fish scatter and they’re a lot harder to catch. And tomorrow I don’t think I’m going to have a low tide for very long so I’m going to have to go to my backup plan.”

Snider, who is targeting bass on the main river fishing 10-inch worms near grass edges, already has an idea what Saturday’s itinerary will likely look like.

Johnston moves up the ladder 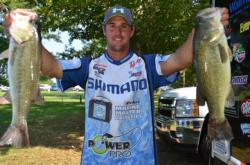 “I did the exact same thing I did yesterday – I didn’t change anything at all,” he said. “I’ve been getting a good early bite fishing shallow. And today I had a limit in 10 minutes. So overall, it was a good day.”

Johnston said that he’s continuing to land the majority of his catch flipping a Punisher Jig, a Canadian-made jig with a smaller profile than most American models.

“During the early morning hours, I’m fishing a ditch I found in practice. I start there to get a quick limit. Then, after about an hour, I’ll move to the grass. I’m specifically looking for a small depression in the grass in this one area I found that nobody else seemed to notice. That’s where a lot of the big fish are. I fished there for about 10 minutes yesterday and about an hour today because I didn’t want to burn too many fish.”

Despite the fact that he’s in third place, Johnston still believes he can pull off a win.

“I think I’m on the fish to win,” he said. “If I get lucky and those fish in the boat, I should be in good shape. Overall, I’m feeling pretty good right now.” 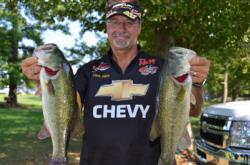 Pro Chris Dillow of Waynesboro, Va., dropped one place in the standings after hauling in a two-day catch of 30 pounds, 1 ounce.

“I went to my primary spot today but there were a few people already there so I just went junk fishing,” said Dillow. “I was pretty lucky to catch them today. I was pretty blessed.”

Dillow said that, as usual, he was targeting bass with his namesake Dillow’s Perfect Jig.

“There were no patterns for me today,” he said. “I was fishing a little bit of everything – rock, wood and grass. Basically I just went out there and went fishing.”

Despite the fact that he dropped a little bit in the standings, Dillow said that he was thoroughly enjoying the tournament so far.

“You know I’m pleased just to have made the top 10 with the quality of the anglers in this tournament,” he said. “My goal is to go out there, go fishing and have a good time.” 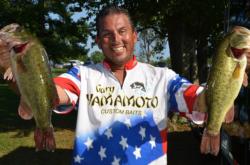 Matt Greenblatt of Port St. Lucie, Fla., grabbed the fifth qualifying spot in the finals with a total catch of 29 pounds, 11 ounces.

Rounding out the top-10 pro finalists were:

However, his scheduled pro partner for Saturday’s competition begged to differ.

“It’s not luck,” said John Hutchins. “Kermit is probably the best co-angler on the East Coast. He’s a great guy to have in your boat. In fact, the last time he was in my boat on the final day of a tournament, he won.”

Crowder said that he grabbed the top spot by targeting bass with a combination of Senkos and ChatterBaits.

“I was fishing grass mostly,” he said. “I had five bites but I jumped a 3-pounder off and only came back with four fish. Imagine that, I came back with only four fish and I’m still leading the tournament. I really thought I blew it.”

Not surprisingly, the Virginia native said he couldn’t be more pleased with the how the tournament has unfolded to date.

“Heck yeah, who wouldn’t be happy to be in first place?” he said. “I like this place. The Potomac River has been very good to me.”

As far as tomorrow is concerned, Crowder said he still hasn’t quite worked that out.

“I’ll have to see what (Hutchins) has to say,” he said. “We’ll come up with a game plan. And hopefully he’ll leave some fish behind for me to catch tomorrow.” 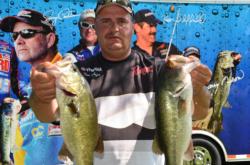 Using a two-day catch of 24 pounds, 3 ounces, Thomas Shafer of Pine City, N.Y., landed in the runner-up spot with only one day of competition remaining.

“Coming into this tournament I was third overall in the points standings so hopefully I’ll move up enough to win (the title),” he said. “I got lucky enough not to break anything off today. I’m fishing grass with about two to three different types of plastics.”

“I got my limit at about 10 a.m. and had a great day overall,” Shafer continued. “All of my fish came out of one area. I was fishing grass edges and the tide was a big factor. When that tide started rolling out, the fish really started feeding.” 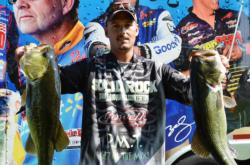 Robert Wedding of Welcome, Md., finished the day in third place with a total catch of 23 pounds, 1 ounce.

“It was a tough day,” Hamilton said. “I had one fish at noon. And I had two fish in the boat at 1:30 p.m. Then, the last hour, I caught a limit. But I never culled once so I’m pretty fortunate to have caught what I did today.”

Hamilton said that he targeted his catch fishing soft plastics in grass.

“My goal was to make the top 10 and I did that,” he said. “It was a tough day. But I kept my head down and squeaked out five fish in the end. And now I get to go fishing tomorrow.”

Finishing the day in fifth place was Safulla Rana of Warrenton, Va., with a total catch of 21 pounds, 12 ounces.