Berhorst conquers Lake of the Ozarks 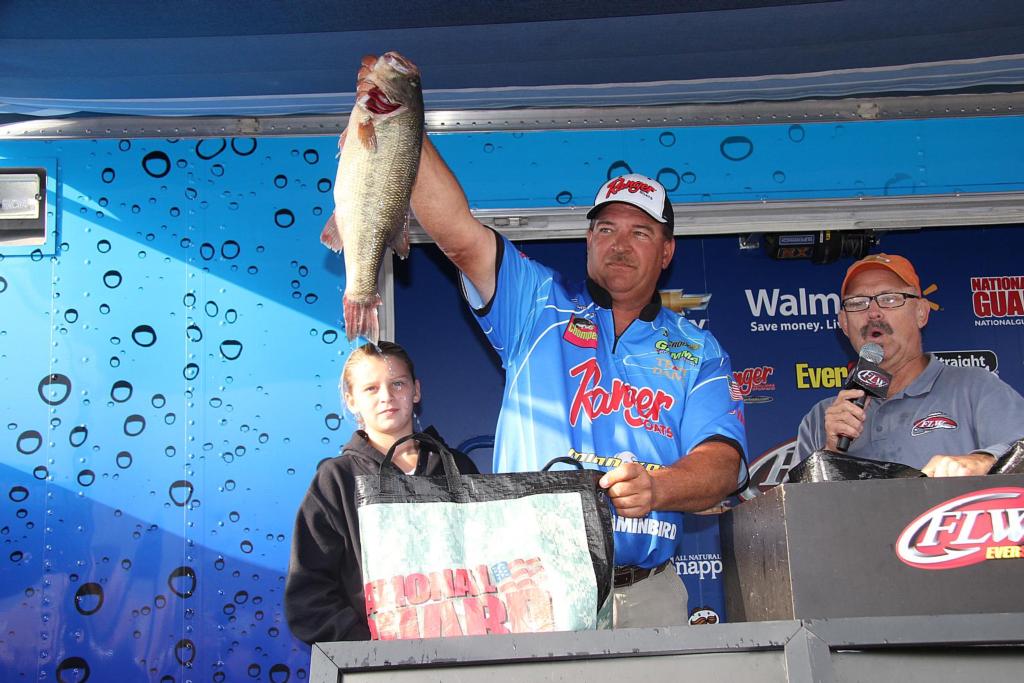 OSAGE BEACH, Mo. – Dennis Berhorst is a pretty cool character, but with an EverStart Central Division victory on the line, he was flipping out. Obviously, the strategy worked because he left Lake of the Ozarks with a solid victory.

A devout fan of flipping, Berhorst made docks his target for most of the tournament. He ventured out to 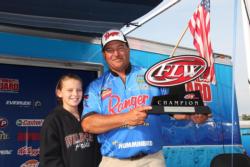 some deep rock structure on day one, but quickly realized he’d hang his hopes where waterfront homeowners hang their boats.

Working the Gravois Arm, Berhorst targeted docks that were at least halfway back into smaller creeks. He fared best on docks in a creek’s shallow areas and he caught most of his fish suspended in about 10 feet.

“I looked for bait,” Berhorst said of his site selection. “If there was food anywhere in the creek, it was usually half to 2/3 the way back.”

In three days of competition, Berhorst caught all of the fish he weighed on a green pumpkin Zoom Brush Hog Texas-rigged on a 4/0 wide gap hook with a 3/8-ounce weight. The bait, he said, does a good job of impersonating bluegill – a staple in the largemouth bass diet. 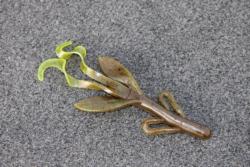 Berhorst said the key to his presentation was flipping his bait as far as possible into the dock structure. With precise targeting, he’d slip his bait between docks and boats, under hoists, over cross bars and across cables. Even though the tournament saw mostly cloudy conditions, the bigger bass still held close to the cover and picking apart the structure to find the sweet spots was his game plan.

“A lot of people can’t get the bait where it needs to be,” he said. “That’s what I concentrated on. It didn’t matter if there was a boat in front of me or behind me. I didn’t pay any attention to that. I just went and fished the way I like to fish.”

Berhorst presented his Brush Hogs on 7 1/2-foot flipping outfits with 16-pound Gamma fluorocarbon. The line’s strength and abrasion resistance, he said, proved crucial in working big fish out from their 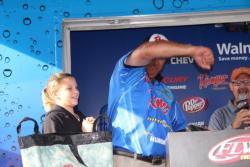 As echoed by numerous competitors, inconsistency was the common theme for a lake undergoing the fall transitions and beset by the damp, overcast conditions of a mild cold front. Nevertheless, Berhorst soldiered on and got the job done with consistent performance.

“I didn’t know if I could catch five a day to start with,” he said. “I had a couple pretty good days of practice and then I’d have a really bad day. But I kept my head up and fished a lot of areas. I think that’s what saved me – I had a lot of areas to fish.” 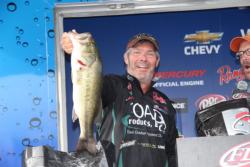 Tim Gaskill, of Edwardsville, Ill. put his Toad Products barrel jig to the test this week and his patented design delivered in a big way with a second-place finish. Gaskill placed 21st on day one with 12-8, but made a big move on day two when he earned a final-round berth by improving to fourth with his biggest bag of the tournament – 17-7. Today, he tacked on another 15-8 and gained two more spots to finish second with 45-7.

Gaskill rigged his green pumpkin barrel jig with a 12-inch Berkley Power Worm and fished it over rocks and underwater points in 25-30 feet. He also fished it around boat docks. Gaskill’s jig is guaranteed to hook fish in the roof of the mouth – an important advantage that helped keep his fish buttoned up this week.

“I wish I could have gotten some sunshine this week, but I got the bites I needed,” Gaskill said.

Gaskill caught his largest fish – 5-plus – on a black buzzbait. His co-angler partner Jeff Risbeck (second place) employed this bait with great success this week and suggested Gaskill try it on a rocky point near the check-in site late in the day.

Jeremy Lawyer, of Sarcoxie, Mo. found his biggest sack – 18-1 – on docks inside larger creeks on day 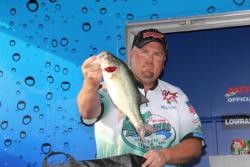 two. Today, that pattern vanished and he had to go looking for something else. He finally found some fish in smaller creeks and pockets.

“I caught a big old bag of fish yesterday and thought maybe I had something figured out and I went back to them and struggled all morning,” he said. “After a couple of hours, I trashed that and found some new water. I pulled out a couple of flipping rods and caught fish pretty quickly.

“I had eight keepers today but I just could never find that big bite I was looking for. I just think the fish in those larger creeks and pockets had gotten pressured too much. I can’t complain; I haven’t lost a single fish since I’ve been here.”

Lawyer caught his fish on an assortment of flipping baits including 10-inch Culprit worm, a Guido Bug, jig and the Roaming Craw – a new crawfish-shaped jig from Fall Creek Lures. His day-three limit of 11-11 raised his total to 44-9 and he finished in third place.

Morehead moves up to fourth 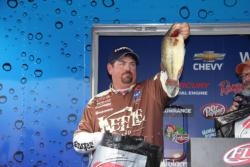 In 18 years of professional fishing, Kettle Brand pro Dan Morehead knows that mechanical issues are just part of the game. Still, it wasn’t easy watching three hours of day-one fishing time slip away after a lower unit failure. However, the other thing that his time on the pro circuit has taught Morehead is that it ain’t over ’til it’s over. He salvaged his first day with 13-3 and finished 15th, but he turned things around with a full day two and sacked up 16-5 to earn a final-round spot in fifth place. Today, he added 14-8 and gained another notch to finish fourth with an even 44 pounds.

Morehead, who finished sixth in the EverStart Central Division points standings, caught his fish by flipping soft plastics. He decided early on that he’d commit to this tactic and make the most of it.

“I just laid two flipping rods on the deck and made life really simple. I have to thank Gamma Line. I pulled some fish out of places I should have never gotten them out of this week. I am thoroughly impressed with that line.”

On day one, Arkansas pro Robbie Dodson located a bunch of fish in a creek off the lake’s Gravois Arm and bagged the largest limit that any pro would see in three days. His first-round weight of 19-1 gave him the day-one lead, but Dodson struggled from then on with subsequent weights of 11-5 and 12-15. 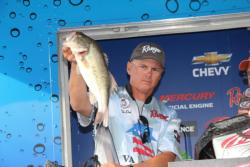 He concluded day three in fifth place with 43-5.

“I tried a lot of stuff in practice and had a really tough time,” Dodson said. “I just went fishing (in the tournament).”

Rounding out the top-10 pro leaders at the EverStart Series Lake of the Ozarks event: