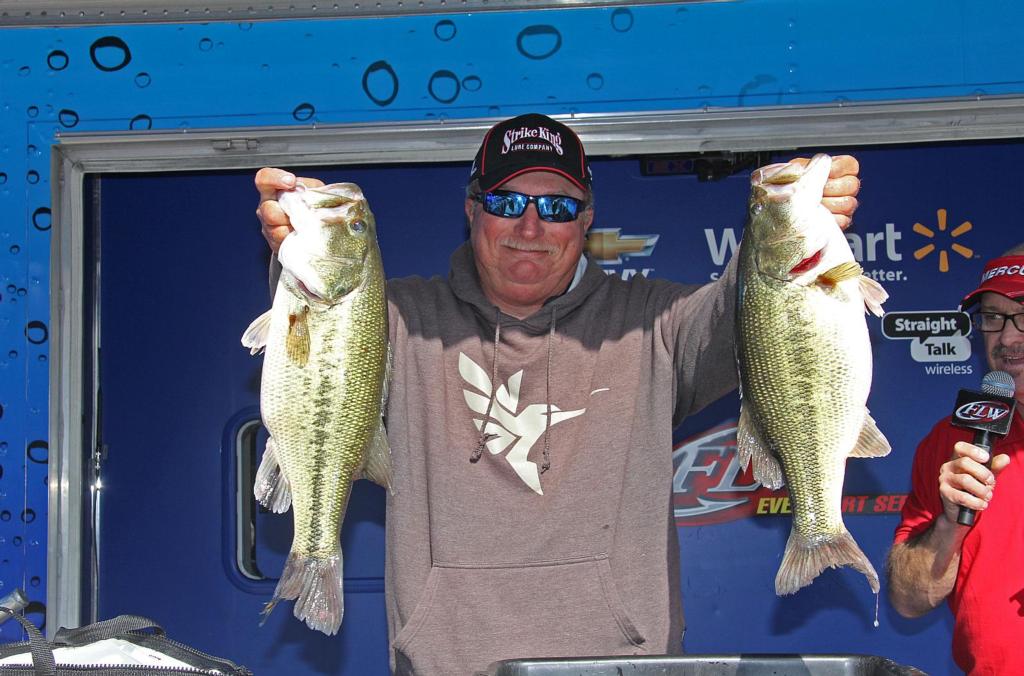 HEMPHILL, Texas – Toledo Bend has yet to show its full potential but a full day of competition, with conditions greatly improved over a dismal and fog-delayed day one, gave EverStart Series Texas Division anglers a pretty good glimpse of what lives on this Sabine River reservoir.

A sunny morning gave way to hazy skies, which turned cloudy by mid-afternoon. The biggest difference, though was the wind. Day one saw nearly flat conditions, but today brought a blow of 15-20 mph and with Toledo Bend’s relatively narrow figure, that made for rodeo-rough rides – especially for those that ran to the lake’s north end.

Nevertheless, with yesterday’s high pressure dissipating, gradually warming temperatures and a little of that cloud cover arriving toward the end of the fishing day, anglers found the fish much more willing to participate in this little show-and-tell at Paradise Point Park. Pros caught 42 limits and co-anglers added 15, as compared to 22 and 2, respectively, from day one. Seven anglers broke 20 pounds on the event’s second day and two anglers caught fish over 10 pounds – including a toad of 13-1 that sixth-place co-angler Casey Martin wrangled. 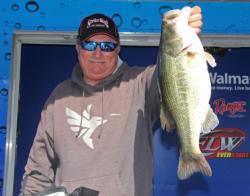 Day two also presented a few dramatic comebacks, not the least of which was Martin’s rebound from a day-one goose egg. No one, though, was happier to sack up a big limit than local pro Stephen Johnston, who endured brutal ribbing from friends and neighbors after “embarrassing the neighborhood” (his words) with a single fish of 3-9 on day one. Johnston, who made the day-three cut in ninth place caught the tournament’s heaviest sack – 24 pounds, 7 ounces. Notably, his stepson Danny Isles also broke the 20 mark and placed 13th in the pro division.

Strike King pro Denny Brauer gained two notches from his third-place performance on day one and took over the lead on the strength of his 22-pound, 10-ounce limit. Paired with a 16-14 bag on day one, the legendary angler from Del Rio, Texas tallied a two-day total of 39-8. Brauer started in the north end drains where he had caught his fish on day one, but the spot had not reloaded so he had to go looking. 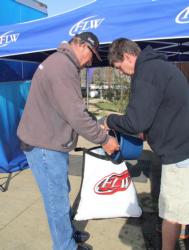 “I just decided to go run the pattern and run new water and it just worked out,” he said. “I had about 12-15 for the day. I had three big bites and one big fish that hit really hard but didn’t take the bait. Maybe I’ll catch him tomorrow.”

Looking ahead to day three, the weather forecast may hinder Brauer’s plan. “What I’m doing is so weather-specific. No wind and sun is better but it looks like I’m going to get more wind and clouds. I may have to totally switch patterns and do something else.”

Brauer fished his signature Strike King Premier Pro Model jig with a Strike King Rage Chunk trailer. He pitched the bait into grass clumps, but not just any grass clumps.

“The placement of the cover in relation to the lake (is the key),” he said. “I’m starting to dial in a little more on what these fish are doing and how they’re starting to set up. They’re wanting to come up and spawn.” 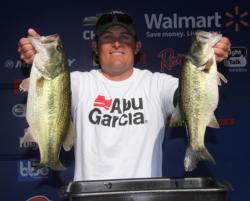 on day one, but he managed a solid performance with a day-two limit of 16-11 giving him a total weight of 36-13. Grice returned to the south end and fished grass beds, as he did on day one. The difference, however, was how he fished the cover.

“The wind changed and repositioned the fish,” he said. “They were on the opposite side of what I was fishing the day before.”

Grice fished the same swimbaits he threw on day one, but with turbulent conditions, he used a heavier leadhead to get the bait deeper. He experienced his strongest activity around 10 a.m. and 2:30 p.m.

“There were two hot streaks in my day,” Grice said. 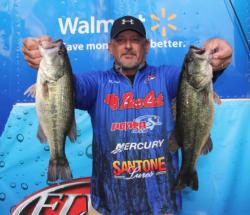 The bite slowed down for Kelly Owens, of Crowley, La., who caught a limit of 12-6 and dropped one spot to third with 30-15. Owens returned to the north end and targeted the grassy drains he fished on day one.

“It was the same type thing, just very few bites,” Owens said. “I had five keepers and I was thankful to catch them. I don’t know what it was. The fish are there; I just didn’t get the bites.”

Owens said the afternoon hours were most productive for him. A brief flurry of activity yielded four of his bites in a short period of time.

Andrew Upshaw, of Hemphill, Texas made a big move on day two by climbing 22 spots to earn a 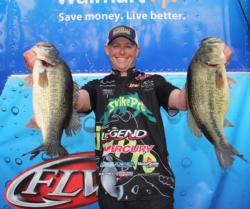 final-round berth in the fourth-place position. After weighing just 9-7 on day one, the former College Fishing standout sacked up 21-3 for a total weight of 30-10.

“I stayed in one primary area today,” Upshaw said. “I caught one 4 1/2-pounder in there yesterday but I kind of rushed through it because I only had about three hours of fishing time (after the fog delay). Today, I was able to break down the water better. I didn’t lose any and it was a pretty awesome day.”

Upshaw ran far north and targeted the grass-lined drains where lots of prespawners are staging. He caught his fish on a Strike Pro Big Bubba crankbait and a Strike Pro Flap Jack lipless crankbait. 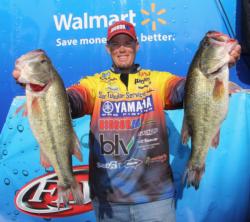 Huntington, Texas pro Keith Combs caught 17-9 and improved 11 spots to fifth with an even 30 pounds. Day one saw Combs start on his deep pattern where he knew he could catch numbers quickly – a high priority after the lengthy fog delay. On day two, he started shallow where he felt more confident looking for bigger bites and got the ball rolling fairly quickly with a Strike King KVD 1.5 squarebill crankbait in a shad pattern and a Redeye Shad in a crawfish pattern.

“I knocked out a limit quickly,” he said. “There were three small ones and two nice ones. Then I went like two hours without a bite so I went to where I caught them yesterday with a Strike King 6XD crankbait and a Game Hog on a Carolina Rig. I caught a 4-pounder there, made two other culls and that was it. Shallow was better early for me and I think wind helped that deal.”

Rounding out the top-10 pro leaders at the EverStart Series Lake Amistad event: 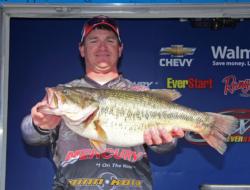 Good thing this wasn’t a one-day shootout, otherwise Hemphill co-angler Jim Furr would’ve left in 54th place with 2 pounds, 3 ounces. Instead, he took his second day on the water and turned in one 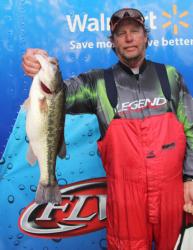 “We ran way up north, which is where I like to fish and it worked out great,” Furr said. “My partner had 20 pounds and I had 20-14. You couldn’t ask for anything more.”

Furr caught all of his fish on Rat-L-Traps. With the boat in 8 feet, he cast shoreward toward grassy drains.

“We figured we’d be fishing (on day three), so we left about 12 o’clock so we really didn’t catch much after that,” Furr said. “With the weather the way it was, we came back early.”

Elton Brock, of Denton, Texas placed second with 21-9, while Kevin Burks, of Kountze, Texas took third with 21-1. In fourth place, Kevin Gressett, of Tioga, Texas had 20-8 and David Kayda, of Huffman, Texas went to fifth with 20-8.

Rounding out the top-10 co-angler leaders at the EverStart Series Lake Amistad event: 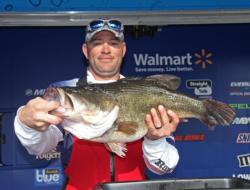