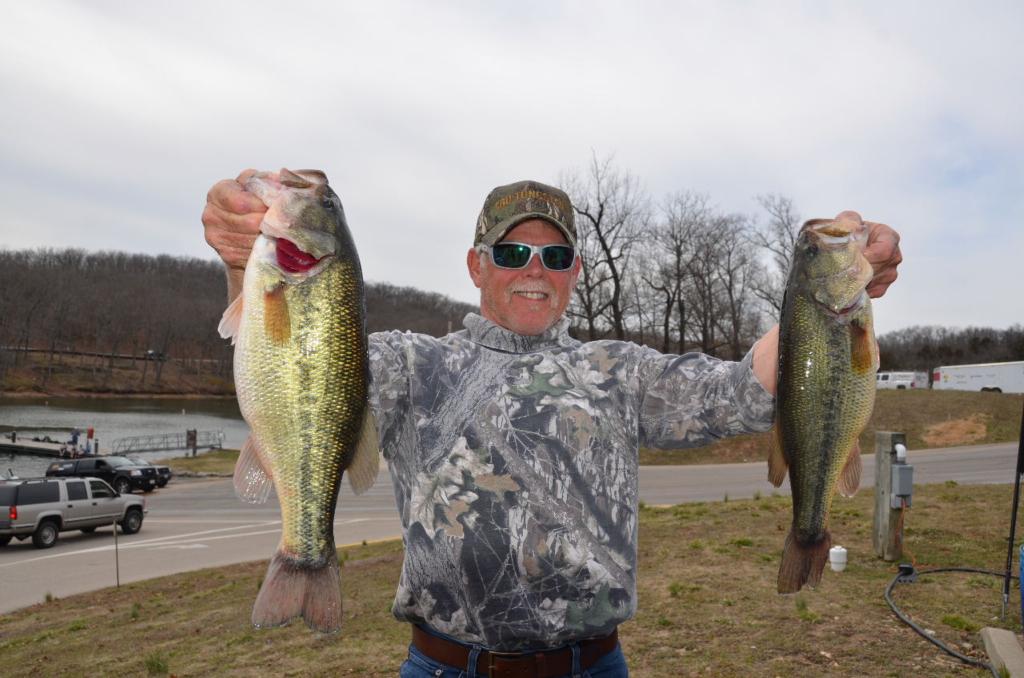 Though it wasn't the 22 pounds, 7 ounces he had on day one, Mark Tucker of Kirkwood, Mo., still holds the lead in the EverStart Series event on Lake of the Ozarks. Photo by Kyle Wood. Angler: Mark Tucker.
March 15, 2013 • Kyle Wood • Toyota Series

OSAGE BEACH, Mo. – There is no doubt the bite has been weak on Lake of the Ozarks this week. Warmer weather had much of the field anticipating fish to move shallower and feed. But, in fact, it was quite the opposite as many of the anglers in the top spots saw their weights drop. One angler, however, stayed on fish to maintain his lead going into the final day in a tough season opener to the EverStart Central Division season.

Mark Tucker brought another limit to the stage on day two that didn’t match up to his first day weight of 22 pound, 7 ounces, but with 16-5 today he increased his lead to 3-4 with a two-day total weight of 38-12.

Today there were only six limits of bass caught out of the 75-plus pros that went across the stage. With sunshine, warm temperatures and wind the general thought was that the fish would begin to push shallow, but instead the bite shut down even more.

“The weather was too nice today,” said Tucker. “Fishing gets tough on days like today. I saw snakes up on the bank and butterflies flying around, I saw things you just don’t normally see out this time of the year.

“What we really need is some foul weather to get these fishing biting. I was throwing a reaction bait and am fortunate to have gotten what I caught today.”

Tucker has been able to avoid the local pitfall that usually follows anglers who spend a lot of time on a given body of water. He said that he has been trying to run a pattern and keep most of the history he has on the lake out of his mind.

“I’m running the same pattern that I was yesterday,” the Kirkwood, Mo., native said. “The water is falling and the bait is starting to move. I was hoping I could get these fishing going on a jig but it hasn’t happened yet. If they do start eating it, it will be lights out.”

With only eight bites today, Tucker is still one of the few anglers that have produced a limit each day. He has shown that his pattern is producing fish but he is still undecided on what he will do tomorrow.

“I never want to have a fixed game plan until the morning of the tournament. There are too many variables like wind and weather that could change, so I like to see what the conditions are and then make my decision. I got fish I can catch within 10 miles from here (launch site) which is nice because I can get more fishing time – but I also know I could run 89 miles and catch some, I’m not sure what to do.” 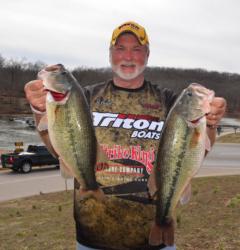 Bob Richardson of Granite City, Ill., is the only pro angler to make the top 10 that is not from the state of Missouri. Another impressive fact is that Richardson caught only four bass on day one and four more bass today. He may not be able to finish out his limit, but he sure can get the quality fish to eat.

Richardson caught 17 pounds, 14 ounces on day one and nearly matched that with 17-10 on day two. With a two-day total of 35-8, Richardson is within striking distance of Tucker, especially if he can catch a limit.

“I only had five bites today, four were bass and one was a drum,” chuckled Richardson. “It is a tough bite. I think this high pressure made the fish not want to eat. I could tell by the way they would just slap at the bait and not get hooked too well.”

Richardson has caught his fish on a jerkbait, which is his favorite way to fish.

“I wait all year for the three weeks I get to fish a jerkbait. It’s what I love to do and I’m confident with it.”

Despite being from Illinois, Richardson is quite familiar with Lake of the Ozarks. He owns four top-10 finishes with FLW and all of them have come on this lake, including a BFL win. He even fishes in local tournaments on the lake from time to time.

“The only chance I have to win is if my fish decide to eat. All of these guys (top-10 field) are great fishermen, but if I get five fish tomorrow they are going to be good ones.”

Richardson is hopeful that the cooler conditions tomorrow will get his fish to feed.

“I really hope they bite tomorrow. Usually for a jerkbait bite you want wind and sun which is what I had the last two days and it didn’t work so well, so maybe tomorrow they will eat.” 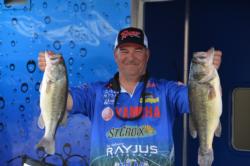 Another angler who managed to scrounge out a limit on both days of competition is Dennis Berhorst of Holts Summit, Mo. Guys like Berhorst and Richardson could be tough to beat as they have shown consistency is their bites, which can go a long way in tournaments like this one.

Berhorst has posted nearly identical catches on days one and two of 17 pounds, 7 ounces and 17-8, respectively. He now has a two-day total of 34-15 and third place as he heads into the final round.

“I only had five bites all day, it’s tough,” said Berhorst.

“I ran a bunch of spots all day trying to get rid of my smallest fish but I just couldn’t. I ran maybe 25 spots or more, it was a lot.”

Berhorst has a few different rods on the deck of his boat that include a Wiggle Wart, jig and jerkbait. The type of cover dictates what bait he will use on a given spot. If he fishes pea gravel transitions he chooses the Wiggle Wart. When an area has big rock he goes with the jig or jerkbait.

The Missouri native hopes that he can put the odds in his favor by hitting as much water as possible.

“I’m going to do the same thing tomorrow,” smiled Berhorst. “I have a few spots that I haven’t hit yet that I can go to if I need them. There was a spot I caught some fish off on day one that I left alone today, so I think I can get some good ones from there. I am just going to fish my tail off.” 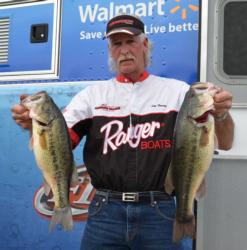 Like many of the anglers this week, Jim Young of House Springs, Mo., had an extremely tough practice. He rebounded on tournament day and caught 17 pounds, 8 ounces on day one to sit in eighth place. Today, he brought in another good limit that weighed 16-12 to bring his overall weight up to 34-4.

“I hadn’t caught a limit all week long in practice,” said Young. “And around 2 o’clock on the last day of practice I figured something out. I had around 11 pounds in 45 minutes on that last practice day.”

Young echoed the words of the other top pros in saying that it is tough and he is thankful for the weight he has.

He got off to a quick start on day one and had a limit by 10:30 a.m. When he started day two, Young figured that the warm weather would help his bite. Instead, Young didn’t have a limit until 2:30 p.m., today and managed to cull twice after that before he needed to head back.

Young ran all over the lake today bouncing from spot to spot. As far as tomorrow goes, he plans to do the same thing and continue to use the one rod he has had on his deck all week. 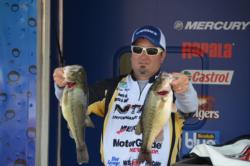 Shawn Kowal of Linn Creek, Mo., brought one of only four limits that broke the 20-pound barrier on the first day of competition with 20 pounds, 3 ounces. Kowal followed the footsteps of many today and only brought in four bass that weighed 13-5. With a 33-8 total weight for the week, Kowal looks to rally tomorrow as he sits 5-4 back from the lead.

Rounding out the top-10 pros after day two of the EverStart Central Division event on Lake of the Ozarks: 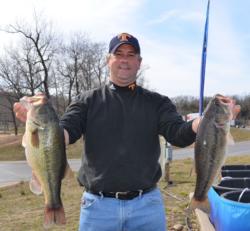 It can be tough for co-anglers to stick with it on the water when it’s such a struggle to get a bite. Over the last two days here on Lake of the Ozarks for the EverStart Series event a grand total of two limits have been caught by co-anglers. One limit belonged to day-one leader Joe McClary and the other to the current leader, Tim Beale of Hernando, Miss.

Beale had an alright day one and sat in 13th place by catching one fish that weighed 5 pounds, 14 ounces. By the end of day two, Beale had sacked the largest tournament limit to be weighed on either the pro or co-angler side. His five fish today went for 24-12, propelling him into the lead with an overall weight at 30-11 and a 12-2 lead for the final day.

“This feels awesome,” said Beale. “I have fished BFLs and EverStarts for years and never made a cut. I have never won anything big so if I won this it would be the pinnacle of my career.”

The day started out like any other for Beale who was paired with pro Rich Dalbey.

“I started throwing a jerkbait today. I had several tied on so I could experiment with them throughout the day depending on water depth or clouds. It took all day but I finally got my fifth fish by 1 p.m., and then it was a long three hours.”

Having one of the best fishing days of his life, Beale seemed to be just enjoying the moment once he got off the stage.

“This is all thanks to Rich (Dalbey). He is the man. He was just so patient and professional and stayed cool all day. He was so awesome.”

Joe McClary of Richmond Heights, Mo.., led after day one with 18 pounds, 9 ounces. He launched this morning with a 6-7 lead over his nearest competitor. Unfortunately, he was unable to catch a keeper bass on day two and surrendered his lead to Beale. Thanks to his great start on day one, McClary only fell down a place to second.

Justin Swast of Pevely, Mo., holds on to the third-place spot after catching three fish today that weighed 4 pounds, 15 ounces. Added to his day-one weight, Swast has 17-1 for a two-day total weight.

Reggie Crabdree of Park Hills, Mo., rose up the leaderboard with some steady catches over the last two days. Crabdree had 7 pounds, 7 ounces on day one and 9-3 on day two. His two-day total is now 16-10 putting him in fourth. 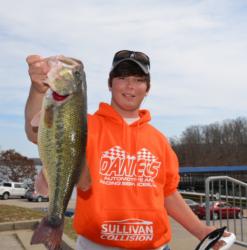 Rounding out the top-5 co-anglers is Michael Stricklin of Vidalia, La., who caught 5 pounds, 8 ounces on day one. He added three good fish to that on day two with 9-10 moving the young co-angler up to fifth with 15-2.

Rounding out the top-10 co-anglers after day two:

The top-10 anglers will take off from Grand Glaize Recreation Area at 7 a.m. Saturday’s final weigh-in will be held at the Walmart located at 4252 Highway 54 in Osage Beach beginning at 4 p.m.