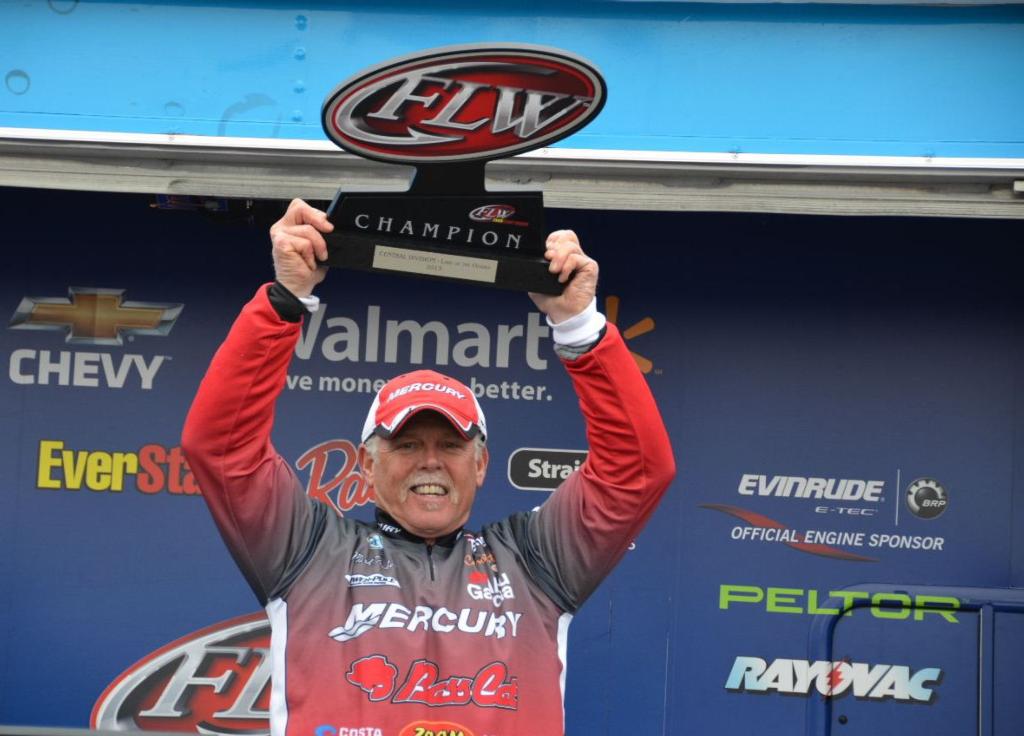 Mark Tucker took the lead on day one and carried it throughout the event. He weighed a massive 23-pound, 4-ounce stringer on day three to bring his three-day total to 62 pounds. He earned a check worth over $34,000 for his victory. Photo by Kyle Wood.
March 16, 2013 • Kyle Wood • Toyota Series

OSAGE BEACH, Mo. – In stark contrast to the sunny, warm day yesterday, anglers launched their boats for the final day of competition in the EverStart Central Division event on Lake of the Ozarks to the warmest weather they would see all day. Temperatures went from the high 70s yesterday to low 40s today, throwing another curveball to anglers already facing tough conditions.

Mark Tucker of Kirkwood, Mo., knew that with these conditions he would have a shot to seal the deal for his first EverStart Series win. He sacked up 22 pounds, 7 ounces worth of bass on day one to take a slim lead. On a tougher day two, Tucker caught another limit (16-5) to increase his lead to 3-4. Knowing that with some wind and clouds he could catch another big limit he fished hard and hauled in 23-4 today to close the door on his competition and a winning margin of 8-8. With 62 pounds over three days of fishing, Tucker earned a check for over $34,000 for his victory. 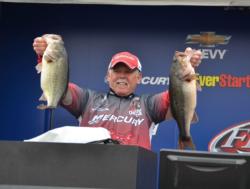 Tucker has a wealth of local knowledge on this body of water and said all week long that it was tough for him to try and fish the pattern he was on and not history. He stayed focused and adapted to the conditions each day to consistently catch good fish.

“The competition here (Lake of the Ozarks) is ungodly,” said Tucker. “You can’t have a bad hour on the water with some of these other guys out here fishing against you. I knew they were going to bring it today, so I knew what I had to do and I was ready.”

The main pattern that Tucker focused on was clearer water where a break on the shore had some deep water close to it. He fished anywhere from take off to the toll bridge, but kept most of his attention on the water clarity in the area he fished.

“I noticed the last couple of days that the fish were hanging around the breaks that were near deep water. I was really surprised to see that most of the fish were suspended, especially since there was water being pulled creating current which usually holds them to the bottom.”

Another factor that played into the success of Tucker’s plan this week was having the wind blow in on his banks. He liked to fish steep banks that had pea gravel on it without any chunk rock.

“The main bank I fished was one of those places that when the wind hit it right you needed to be there,” the 52-year-old pro said. “Today it took a few passes on that bank to figure out where those fish setup, and that’s kind of how it was all week for me. But I really needed the wind on the banks to make the big fish commit. That’s why yesterday I knew I wouldn’t have a big bag is because the wind didn’t blow.” 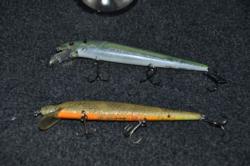 Tucker would have loved to get some fish going on a jig this week but just couldn’t get it to happen. Instead, he threw a jerkbait, which is something he dialed in on in practice. His jerkbait fishing actually consisted of a two-bait system. When it was sunny out Tucker would throw a River2Sea Ripper Jerkbait on 6-foot, 6-inch medium action Carrot Stix with 10-pound fluorocarbon. While early in the morning or when it was cloudy he relied on a Smithwick Rouge rigged on the same tackle.

Today, Tucker picked up an umbrella rig to trigger some bigger bites. That decision led tucker to catch the largest bag of the tournament to be weighed on the pro side – 23-4. For his A-rig of choice, Tucker used a Picasso School-E-Rig. He threw it on a 7-foot, 6-inch Carrot Stix with 20-pound fluorocarbon and Zoom Swimming Flukes for baits. He opted to run smaller-sized flukes on the outside with the Swimming Super Fluke in the middle of the rig.

“When I threw that School-E-Rig I tried to cast it out and let it sink all the way to the bottom. Once it hit bottom I would use a stutter-step retrieve. There was a certain rhythm to work that rig in which was the only way I could get bit.”

Tucker pours concrete for a living and said that with this victory he might be able to take the summer off and keep fishing.

“As fishermen we try so hard to be up here (holding the winning trophy) and it is such a struggle. I have to say thanks to Mercury, Power-Pole and Bass Cat – I appreciate their support. I have to give another big thanks to my friend Billy Hines who drove out here from California. Billy gave me those River2Sea jerkbaits before the tournament and I think without those I wouldn’t have made it this far.” 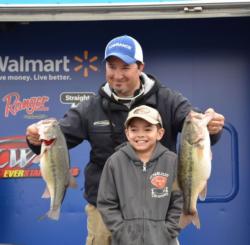 Shawn Kowal of Linn Creek, Mo., started the week off strong with 20 pounds, 3 ounces on day one. He only caught four bass on day two that weighed 13-5, dropping him to sixth place. Kowal rebounded today, but it was too little too late as his 20 pounds wasn’t enough to take the title from Tucker, though his three-day total of 53-8 still landed him a check for close to $13,000.

Kowal is another local in this tournament that was able to find new water that produced well for him this week.

“In practice I found four spots that had schools of fish on them with the side imaging on my Lowrance,” said Kowal. “Most of those areas were from the Grand Glaize Arm up to the dam. Over the first two days I would start up by the dam and work my way back.”

Kowal noticed that when the sun was out the fish would push up shallower and he would target them with a jig. On the cloudy days he would have to fish a little deeper, which is when the jerkbait would come into the equation.

“Today I chose not to fish the places I had found in practice,” said the 40-year-old car salesman. “I knew those areas were pretty picked through so I just fished some local places I knew of. The jerkbait and an Alabama rig were my two baits I used today.”

With the cloud cover on the final day, Kowal worked deep banks where he would sit with his boat in 25 feet of water and cast up to the bank. He noted that most of the fish were most likely sitting in 15 feet of water. 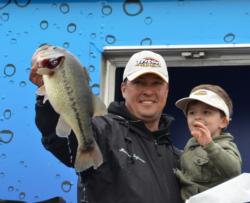 One of the local anglers who is no stranger to doing well on Lake of the Ozarks is Marcus Sykora of Osage Beach, Mo. He fished a solid event posting 20-14 and 22-5 on days one and three, respectively. His downfall was day two where he only managed four bass for 8-6. He ended up with a three-day total of 51-9 and took home a check worth over $8,600.

Sykora was actually without a boat until the day before the tournament started.

“I have to give a huge thanks to White’s Marine for getting me my new Triton in time for this event,” said Sykora. “They had it to me fully rigged by 1 p.m. on Wednesday which gave me enough time to break the motor in before the tournament. Those guys are absolutely awesome.”

The local pro started out his week by fishing a Dave’s Custom painted Megabass jerkbait near the dam around isolated brush on the bank. He had his limit by 11 a.m., and began to use the rest of his day to practice.

Having not found anything good the day before, Sykora went back at it on day two but could only manage five bites – landing just four of them for the day.

“I went and looked at the Gravois Arm and Bagnell Dam today to try and find some clear water. I still targeted isolated brush up near the bank. I am most confident in getting keeper bites with a jerkbait so I stuck with that.”

Sykora would throw his Dave’s Custom painted Megabass jerkbait on a 6-foot, 8-inch Dobyns Champion rod with a Shimano Core reel spooled up with 8-pound monofilament. He said that he needed to fish slow, letting the bait sit still for close to 10 or 12 seconds. 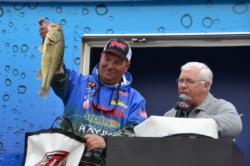 Dennis Berhorst of Holts Springs, Mo., fished a fairly consistent tournament. He caught 17 pounds, 7 ounces on day one and followed that up with 17-8 on day two. Today, however, he caught just three fished that weighed 10-1 to give him a three-day total of 45 pounds. That was good enough to earn a check worth nearly $8,000.

“I don’t know what happened today, I just couldn’t land them,” said Berhorst. “They just weren’t biting the jerkbait that good. I had to let the bait sit still for them to bite it and they still had trouble eating it. I lost three fish over 5 pounds today.”

“I needed the fish to move up this week. I probably could have caught more fish if I would have followed them back deeper, but that’s not how I like to fish. I like to throw at something.”

All of his fish this week came on a Dave’s Custom Baits jerkbait in the Missouri Shad color. 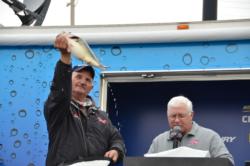 Slowly climbing the leaderboard this week was Tim Fleetwood of Forsyth, Mo. He caught 12 pounds on day one to sit in 19th place. After day two he squeaked in the top 10 with a 16-4 catch. Today, he brought a limit a weighed 15-4 giving him a total weight for the week of 43-8. Fleetwood worked his way up to a check worth $6,891.

Rounding out the top-10 pros in the EverStart Series event on Lake of the Ozarks:

The next EverStart Series Central Division tournament will be May 2-4 at Pickwick Lake in Florence, Ala., and is hosted by the Florence/Lauderdale Tourism Board.