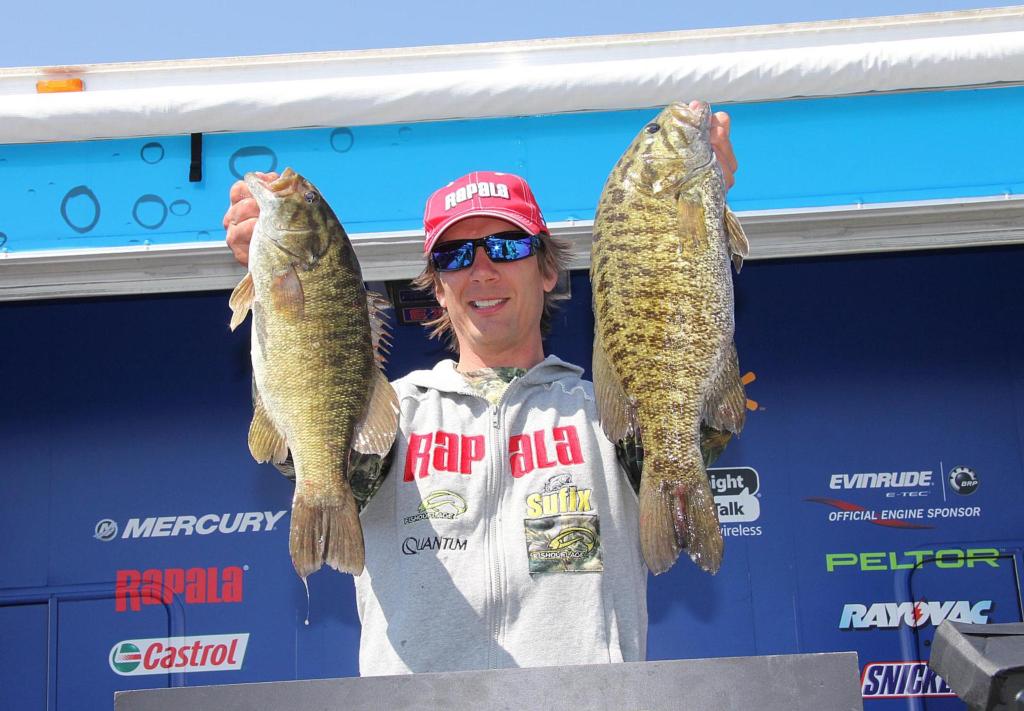 POTTSBORO, Texas – Yesterday, Troy Lindner couldn’t do what he wanted to do, but he ended up leading the EverStart Series Texas Division tournament on Lake Texoma. Today – ditto on both accounts.

After locating a nice pile of smallmouth on main lake points during practice, the Los Angeles, Calif. angler had hoped to get back on those brown fish during day one. Mother Nature, however, had other plans, as a nasty line of storms moved across southern Oklahoma during the predawn hours prior to the day-one take-off. This system arrived on the leading edge of a cold front, which dropped air temperatures some 30 degrees and blasted Texoma with northwest winds of 20-25 mph.

At today’s takeoff, Lindner had every intention of sticking with his day-one game plan, but he found the 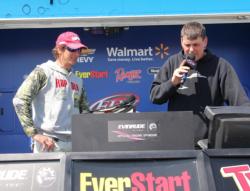 marina fish less than cooperative. (The high pressure and bluebird skies of a post-frontal day probably had the big green sissies in a bad mood.) Knowing he needed a change of scenery, it wasn’t too hard for him to come up with a Plan B.

“I missed a nice limit of largemouth this morning and that kind of spun me out,” Lindner said. “I missed fish yesterday too, but they bit better. I didn’t have a limit until noon when I went back out to those smallmouth spots. I also fished some new smallmouth spots and they were pretty cooperative.”

Today, Lindner added 16-6 for a two-day total of 43-14. Lindner caught his smallies on an undisclosed swimbait and the new Rapala Scatter Minnow (perch color). Introduced in late February, the latter features a curved lip that causes the bait to dart side-to-side with a frantic action that mimics and fleeing baitfish. 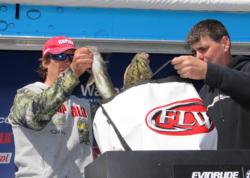 “It’s pretty erratic and I think that’s what these smallmouth love,” Lindner said. “I have manually impart this action with (other baits), but with the Scatter Minnow, I just have to throw it out and reel it and it does it on its own.”

Lindner said he got on his quality largemouth around 2 o’clock and only had about an hour of good fishing. Nevertheless, he was pleased with Texoma’s ability to produce competitive limits of largemouth and smallmouth bass.

“That saved me today,” he said. “The largemouth just weren’t happening, so I switched gears to the smallmouth. I love smallmouth – they always bite.”

Of his final-round plan, Lindner said: “I’ll probably start on smallmouth tomorrow and if I can get a decent limit of even 13 pounds I’ll be pretty happy. I’m still trying to learn this lake. These (Texas anglers) spend so much time on this lake they know what happens when the weather changes. I’m still learning it.”

Tim Reneau, of Del Rio, Texas made a solid showing on day one, with a 17-pound, 9-ounce limit that 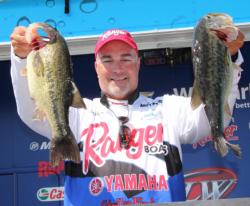 put him in 13th place. Well, today, he made things interesting by sacking up the event’s second-largest limit – 24-13 and pulling within a pound and 8 ounces of Lindner with 42-6.

Reneau fished the mid-lake region and focused on rocky, transitional banks. Spots where the rocks prominently extended into water were most promising and those in the wind were best. After experimenting with two initial baits, Reneau figured out that a third reaction bait (undisclosed) was the ticket.

“They let me know pretty early what they wanted and then it was like a 45-minute flurry,” Reneau said. “The first two were big ones and they got off, so I just regrouped, put a trailer hook on and then caught them.”

Another flurry came at 10 a.m. and during this activity, he culled two 3-pounders for a pair of 4’s. That key bait he identified early served him throughout the day and produced all of his keepers.

Cade drops a spot to third 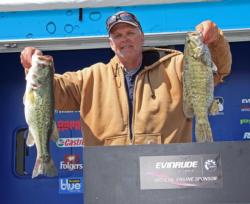 Jeff Cade, of Richardson, Texas said the last two hours of his day were barren, but getting off to a good start and producing throughout the day delivered a limit catch of 17-6. Pairing that with his second-place effort of 22 pounds on day one put him in third place with 39-6.

“I had a limit by about 8:30 and that settled me down and I could really focus,” he said. “I had 12-15 keepers today and upgraded several times.”

Cade said that, just like day one, he stuck with a pattern that produced well in practice. He caught his fish on a custom bladed jig with a split tail trailer.

“It’s really been working,” Cade said.”I’ve about worn the hook off that bait.”

McAlester moves up to fourth

Spencer McAlester, of Denison, Texas gained four spots today on the strength of his 18-pound, 13- 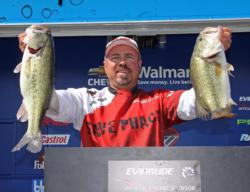 ounce limit. His day-two weight was an ounce heavier than his day-one bag of 18-12. A total weight of 37-9 moved him from eighth place to fourth.

“I was catching them out of brush piles yesterday, but today it was like they just quit,” McAlester said. “I just went offshore and started throwing out deep.

McAlester caught four of his fish on a Bill Norman DD22 in 8-15 feet. One of his keepers bit a Texas-rigged worm in a brush pile. 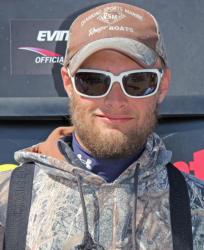 Eric Wright, of Scurry, Texas has been committed to bed fishing since practice and, while he caught his day-two limit by sight fishing, the bite was significantly less than day one in which he sacked up 21-11. Today, Wright’s 14-pound, 4-ounce bag gave him a total of 35-15, as he slipped two spots to fifth.

“It was a little tough today and I only caught seven fish,” Wright said. “That cold front blew in and blew a lot of females off the beds and everything I caught today were males – just big enough to get me in there.”

Wright caught his fish on a Texas-rigged worm. Each fish, he said required about 45 minutes of effort.

Rounding out the top-10 pro leaders at the EverStart Series Lake Texoma event:

Ray Peace, of Arlington, Texas caught a day-two limit of 12-10 and moved up a notch to take over the 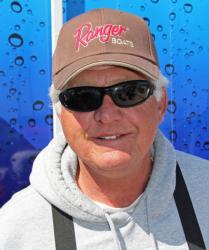 co-angler lead with 30-11. Peace, who carries a lead of 3-4 into the final round, said he struggled to find keepers, but a big kicker saved his day.

“It went kind of slow today, I only had three fish,” Peace said.”I had a 6-pounder and a couple other decent fish. It was quite a bit slower than it was yesterday. I didn’t change anything; I just went with what they’ve been biting and it seemed to do ok.”

Peace said he caught his biggest fish on a weightless, Texas-rigged Senko. A shaky head with a finesse worm and a swimbait produced the others. Today’s weather required him to adjust his retrieves to fit the fish’s generally lethargic mood.

“I had to slow down quite a bit,” he said. “The bites were few and far between.”

Steve Hope, of Ovilla, Texas took second in the co-angler standings with 27-7, while Ralph Logan, Sr., of Magnolia, Texas was third with 26-7. In fourth place, Darren Scott, of Fort Worth, Texas had 24-0 as Gerald Andrews, of Ruston, La. placed fifth with 23-14.