Merriman moves out front at Wheeler 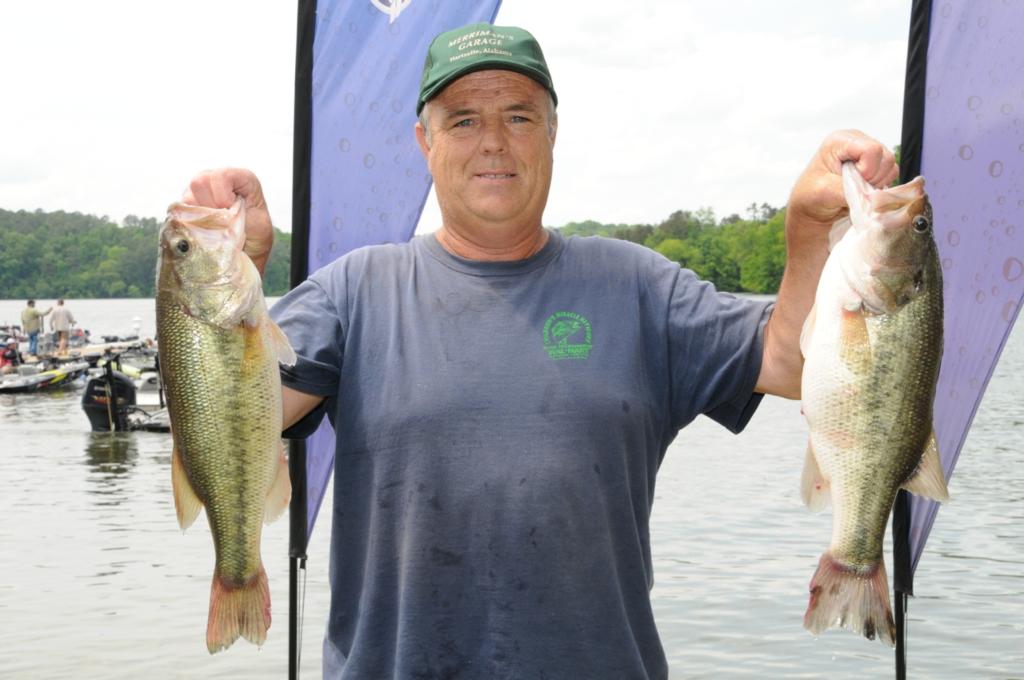 ROGERSVILLE, Ala. – If Wheeler Lake was an electric cord it would be a high voltage wire given the amount of current running through it right now. And current was the name of the game on Wheeler today.

All but one of the top five pros fishing the EverStart Series Southeast event on Wheeler played the current card today for their catches.

Whether it was main points breaking the current down the lake, or small current craters along the main Tennessee River above Decatur, eddies and backwashes were the prime real estate on a sunny and warm day one.

Leading the event is Brian Merriman of Falkville, Ala., who focused his efforts on main-lake points to accrue a five-bass limit weighing 22 pounds, 5 ounces.

“When the water is running like this it builds eddies up somewhere around those points,” Merriman said. “It pushes the fish up on those flats around the points. And as long as the water is muddy like this, they usually stay there. If the water was clearer, they could wander around and scatter out more, but with high, muddy water like this it tends to compact the fish into small areas.”

Merriman said he fished about eight places total today and he believes a majority of his fish are post-spawners trying to get back out to the main river.

“The key to getting the bigger bites is throwing a really big bait,” he added. “I can catch a ton of fish on other baits, but they’re all small. So I went to a big bait today and that helped bring the better quality.” 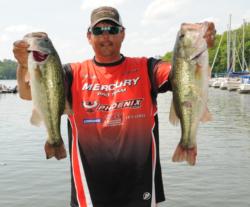 Davis is picking his way down the banks of the ripping Tennessee River keying on specific current breaks and estimates he caught about 20 fish on the day.

“That current and water color position the fish in the right places,” Davis said. “I don’t necessarily catch multiple fish in the breaks, it’s more of a one-at-a-time thing.”

“I’ve got a couple of key stretches I might revisit tomorrow, but for the most part I’m going to fish new water,” he added. “I know the exact kind of break I’m looking for and when I see it, I just pull over and fish it.” 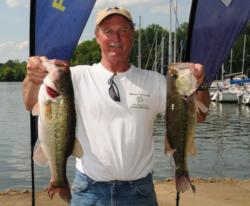 Rick Taylor of West Olive, Mich., captured five bass for 20 pounds, 6 ounces to tie for second place after day one.

Taylor is also playing the current for his catches.

“I found these fish in current about 5 days ago,” Taylor said. “Back then the water was clear and I was catching them a certain way. Today I got up there and it was mud, I mean as muddy as it could be. I knew the fish could not have gone anywhere so I spent about an hour trying all kinds of things and then finally figured out how they had repositioned in that dirtier water.”

Taylor figures he caught about 15 fish on the day.

Fitts is the only one in the top five not playing current seams for his catches. Instead Fitts is on a shallow bush-flipping program where he believes the bass are spawning.

“I’m way back on the flats and in the pockets where they are spawning,” Fitts said. “It’s a dicey situation though. There’s just enough water in the bushes right now. I mean, if the water drops just five or six inches, it’s over. If it stays the same or maybe even comes up, I should be okay – maybe more will move in.” 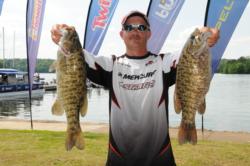 “I’m a little discouraged with my catch today,” Aaron said. “I had nine or ten little places where I could catch multiple fish – little post-spawn spots they flock to when they head back out to the river – but today I only caught fish off of four of those spots and that really worried me. I don’t know what happened to the other places – they should be on those, too.”

Aaron thinks clouds and rain are going to make fishing much better tomorrow.

“The only thing I can figure is the weather kind of hurt a few of my spots,” he added. “We are supposed to get some wind and rain tomorrow and that really fires these TVA fish up. I wouldn’t be surprised to see some bigger bags caught tomorrow if the weather gets bad.”

Nicholas Reeves of Moulton, Ala., caught the big bass in the Pro Division on day one weighing 6 pounds, 2 ounces.

Rounding out the top-10 pros in the EverStart Series event on Wheeler Lake after day one:

Ethan Cox of West End, N.C., leads the Co-angler Division of the EverStart Series event on Wheeler Lake with a five-bass limit for 18 pounds, 9 ounces. 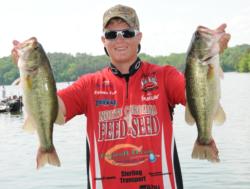 Cox spent the day fishing with pro William Davis (2nd) and was able to capitalize on swift current.

“The way he is fishing in that current, he can’t really hit everything and he left me plenty of room to fish,” Cox said. “I’d pay close attention to where he pitched and I’d try to hit the places in between his pitches.”

Scott Towry of Lawrenceburg, Tenn., is in second place in the Co-angler Division with a five-bass limit for 18 pounds, 6 ounces.

Michael Stewart of Pell City, Ala., is in third place with five bass for 17 pounds, 10 ounces.

Nick Thliveros of St. Augustine, Fla., the son of well-known pro Peter T, rounds out the top-five co-anglers with a five-bass limit for 16 pounds, 5 ounces.

Curtis Merriman II of Cullman, Ala., caught the big bass in the Co-angler Division on day one weighing 5 pounds, 10 ounces.

Rounding out the top-10 co-anglers in the EverStart Series event on Wheeler Lake after day one: