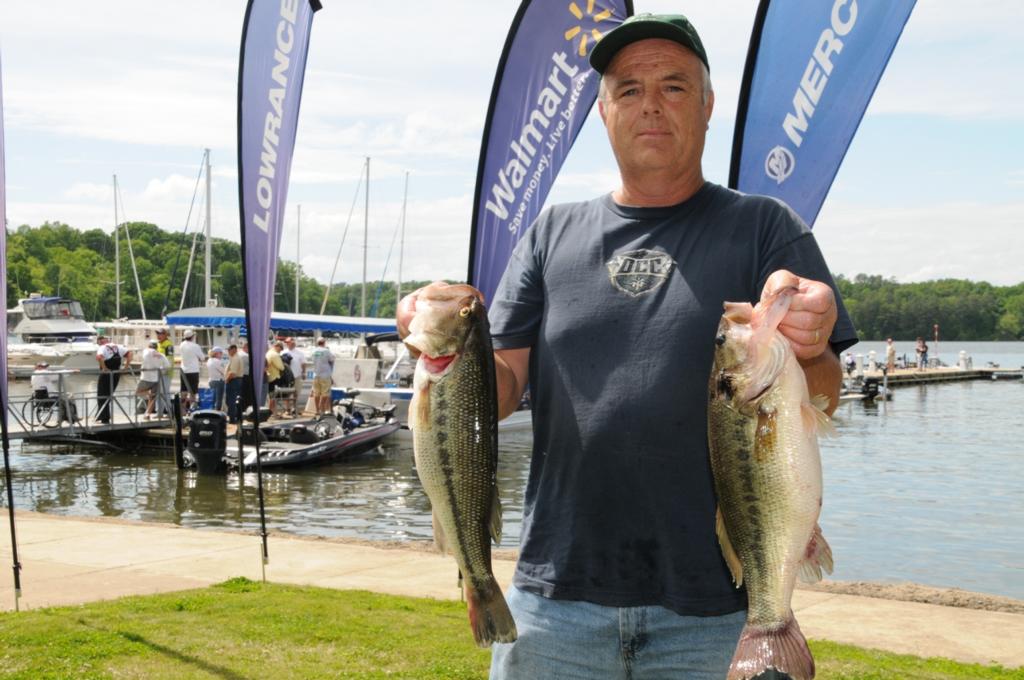 ROGERSVILLE, Ala. – Brian Merriman of Falkville, Ala., continues to lead the EverStart Series event on Wheeler Lake after day two, but he has his work cut out for him tomorrow if he plans on taking home his first EverStart trophy.

Merriman was able to back up his day-one catch of 22 pounds, 5 ounces with a solid 18-pound, 15-ounce effort today for a two-day total of 41 pounds, 4 ounces. He holds just a slim 7-ounce lead over second place.

In all just 5 pounds, 6 ounces separates first place from 10th place. And many believe there is still a mid-20’s limit still to be had in this event.

What’s more, conditions are changing so fast that fish are vacating some areas and showing up in others by the hour. Wind, clouds and more rain graced Wheeler Lake today, shuffling the playing field again. And it appears that a stronger shallow bite showed up today. The lake did fall several inches today, but with more water entering the system, it could bounce back again tomorrow.

As for Merriman, he will be sticking to his main-lake point fishing program, targeting classic primary points for post-spawn fish.

Today Merriman did reveal he is cranking points with a couple of specific crankbaits. He grinded on just three areas today.

“The fish were far more scattered out today,” he said. “The cloud cover does that to these fish on this lake. Yesterday, they were packed tighter on the key stuff. You could catch fish after fish on the same exact cast to the cover. Today, though, I had to wander around more and work harder for them. Instead of being on one or two specific spots on a point, they were scattered up and down the points and flats around those points.” 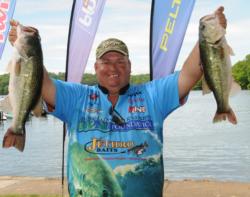 Jeff Fitts of Keystone Heights, Fla., moved up a couple spots today to second place with a 20-pound, 11-ounce catch for a two-day total of 40 pounds, 13 ounces.

Fitts is making the shallow game work for him far from the main current of the river. He is targeting spawning bass around bushes and grass where water level is critical.

“I mostly flipped bushes yesterday, but the water fell a few inches today and the cloud cover kind of took that bite away from me,” Fitts said. “So I started throwing a Jethro Baits Willie Toad and redeemed myself with some good bites. I’m pretty sure these fish I’m catching are dead in the middle of the spawning process – they’re tails are bloody.”

“If the water would come back up again tomorrow I think it would really help me,” Fitts said. “I think some more water and some more sunshine tomorrow would put them back in the bushes.” 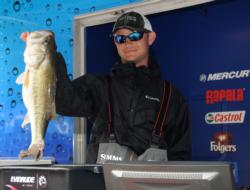 Jordan Lee of Auburn, Ala., rocketed from 19th to 3rd place today by weighing in the biggest limit of day two: 22 pounds, 3 ounces.

His limit was anchored by a 6-15 largemouth, which took big bass honors in the Pro Division. He now has a two-day total of 38 pounds, 15 ounces.

What was the difference in yesterday and today?

The rest of Jordan’s fish came from fishing flats very near river current.

“In a couple of my better places, I can see the main river and the current just a little ways away,” he said. “They’re almost like in the first slack water off the river. I spent a lot of time throwing a Chatterbait today. But the big one did come from a brushpile.”

Chad Aaron of Lawrenceburg, Tenn., moved up a spot to fourth place with an 18-pound, 12-ounce catch today for a two-day total of 38 pounds, 5 ounces. 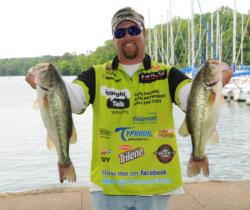 And today he did not disappoint, bringing in 18 pounds, 8 ounce for fifth place with 37 pounds, 10 ounces.

“I caught some out deep yesterday, but today I moved in shallow and got it going – on a frog, flipping, spinnerbait – you name it,” Kenney said. “Every time I’d say, `Okay, let’s go try it out deep,’ I’d catch another chunk and stay around. They’re still some up shallow spawning. Everyone I’d catch, they’re tails would be bleeding.”

Despite his good day shallow, Kenney says he is contemplating a move back out deep tomorrow.

Rounding out the top-10 pros in the EverStart Series event on Wheeler Lake after day two:

Scott Towry of Lawrenceburg, Tenn., now leads the Co-angler Division of the EverStart Series Southeast event on Wheeler Lake with a two-day total of 33 pounds. 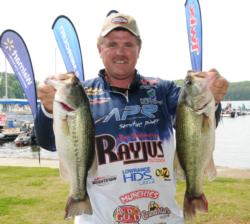 So far, Towry has found his success on a jig, a Gambler craw and a spinnerbait in shallow bushes and around log jams.

If the name Thliveros sounds familiar, it should. His father is the well-known Florida pro Peter T. And apparently he has taught his son well as Nick T will be fishing the finals in his first EverStart event. Dad ended up 27th in the Pro Division.

Dean Harcourt of Sebastian, Fla., is in third place with a two-day total of 28 pounds, 13 ounces.

Donald Jason of Medina, Ohio, is in fourth place with a two-day total of 28 pounds, 6 ounces.

Brent Chitty of Moultrie, Ga., rounds out the top five with a two-day total of 28 pounds, 2 ounces. 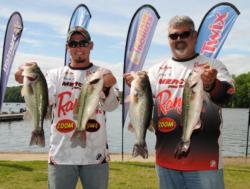 Rounding out the top-10 co-anglers in the EverStart Series event on Wheeler Lake after day two: