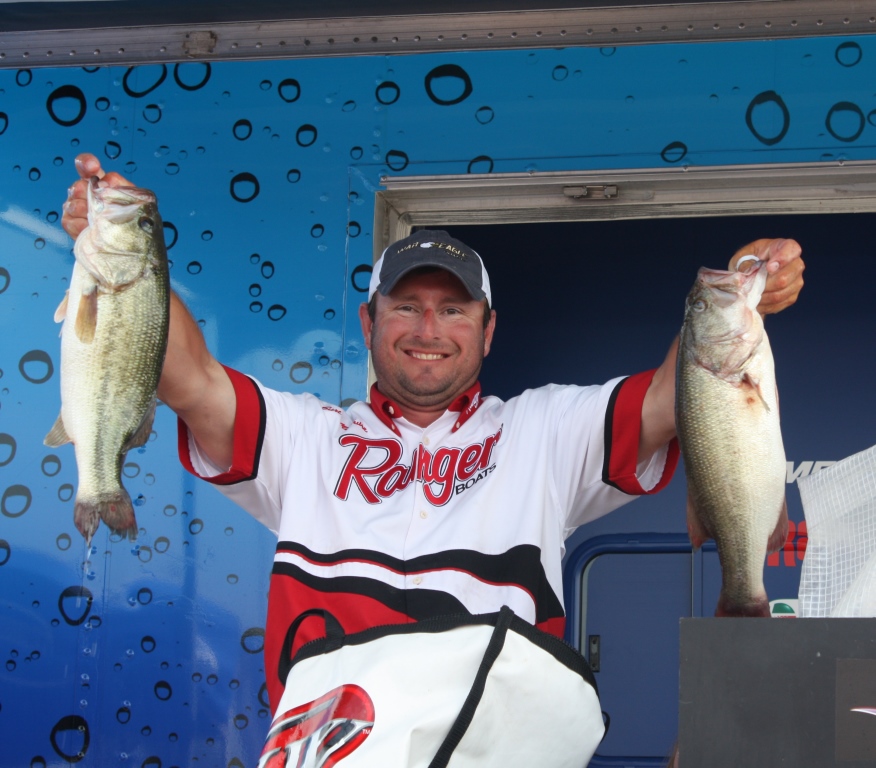 BENTON, Ky. – It took three days, thirteen rods, at least five different kinds of lures, and countless miles and gallons of gas for Curt McGuire to claim the EverStart Series Central Division title on Kentucky Lake, and he claimed it in decisive fashion, leading the event wire to wire before closing the deal today with a 7-pound, 6-ounce margin of victory.

McGuire’s domination of this event began Thursday, when he busted a 25-pound, 2-ounce sack to lead the field. He followed that up with another 22-pound, 6-ounce haul on day two, and he slammed the door on the competition today with yet another limit, this one clocking in at 22 pounds, 11 ounces. That brought his three-day weight to an eye-popping 70 pounds, 3 ounces, earning him $40,300 in cash plus a fully rigged Ranger Z518 for being Ranger Cup qualified. 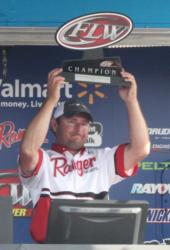 McGuire and runner-up David Gnewikow maintained their No. 1 and No. 2 positions all week, with Gnewikow coming as close as an ounce on the first day. Ultimately, neither Gnewikow nor anyone else could touch McGuire and his hot spots located near his hometown of Paris, Tenn.

It wasn’t just one bait, one presentation or one spot that led McGuire to his second EverStart Series victory here, but numerous schools of fish, each in different depths and each requiring different methods. He made the long run south to Tennessee again today, though he mainly stayed around Paris.

He saved himself three spots for the final day, two of which he described as not as good as the third. However, by the time he pulled up on the third, he already had 18 pounds in the livewell.

“I’ve never seen anybody fish them,” he said. “I was north of Paris, in Paris, and south of Paris. I ran down to the spot where I caught them the first day, but I didn’t catch anything. So I went south of Paris and caught 18, then went back to Paris.”

In the meantime, his co-angler Steve Ralls of Buncombe, Ill., loaded up the livewell, and he went on to win the Co-angler Division. In fact, all of his co-anglers this tournament made the cut.

As for his spots, change was key.

On stage, he mentioned using 13 rods that he rigged at one time or another with spoons, crankbaits, worms, Carolina rigs and jigs. The shallowest water he fished was 5 feet, and he fished in other places as deep as 26 feet. The difference was finding schools populated by fat ones.

Though his local knowledge is extensive and significant – he is an experienced Kentucky Lake guide – luck was on his side this week.

“I was fortunate to find stuff nobody else found,” he said.

Gnewikow overcomes misfortune to hang on to second 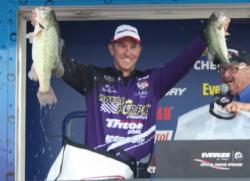 On the leaderboard, things didn’t change at all for David Gnewikow, as he remained in the second-place spot he held on days one and two. But in reality, things changed dramatically for the Mount Juliet, Tenn., pro.

About 45 or 50 miles into his long run to Tennessee, Gnewikow blew his powerhead. It would enough to derail any competitor, but Gnewikow had a secret weapon – he picked up the phone and dialed Kevin Woodside and Matt Nix, two men who know the true meaning of friendship.

Woodside and Nix were waiting for takeoff at another tournament – entry fees paid and ready to go. Eerily, they had already discussed what they would do if their pal Gnewikow ran into boat trouble. So when they got the call, they didn’t have to think about it – they left their tournament before it started and brought their friend a boat.

Gnewikow loaded into the new boat and took off at breakneck speed back to the launch area, where he had to check in all over again with the new rig. He turned around and raced back to Tennessee, ultimately collecting a limit worth 18 pounds, 10 ounces, bringing his three-day total to 62 pounds, 13 ounces.

Gnewikow earned $15,000 for his second-place finish, a pretty penny no matter what but particularly rich when you consider the events of the day, plus the fact that he did not enter this week’s tournament until the day before it started.

“I wasn’t in the tournament until Wednesday, and I didn’t practice,” he said. “I’ve had three tournament wins (on Kentucky Lake) in the last month. I fished Tuesday and caught 23 pounds – and stayed off my good stuff.”

It was then that Gnewikow decided to heed the suggestion of friends and sign up to fish the EverStart.

“Considering the day I’ve had, I’m pretty happy with what I got,” he said. “I woke up at 2 o’clock this morning. For some reason, God gave me Proverbs 3:5 (“Trust in the Lord with all your heart and lean not on your own understanding”). As soon as that engine (blew), it popped back in my head. It was hard to stay cool today, but somehow I held it together.”

Gnewikow caught 25-1 on day one to sit behind McGuire by only an ounce. On day two, he caught another 19 pounds, 2 ounces, and he said he caught his fish this week on a Strike King 6XD and a big worm.

“I was fishing shallower than a lot of these guys,” he said. “I’ve had a place to myself for several years. I knew if I fished this tournament, I’d probably ruin it.”

Indeed, Gnewikow reported yesterday seeing spectators watching him catch and cull on this spot. He drove down there this morning expecting it to be full of competitors from a tournament coming out of New Johnsonville, but to his amazement, the spot was still his, thanks to the generosity of these fellow fishermen.

“They asked me, `Are you David Gnewikow? We’re leaving,'” he said.

Even with all the suggestions, predictions, nighttime awakenings and selfless friends, Gnewikow still doesn’t feel the tournament was fated to be his.

“Even if everything had gone as it was supposed to, I still wouldn’t have won,” he said. “I would have needed 8 more pounds.” 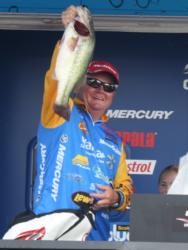 Having stayed in the top 10 all week, Walmart pro Mark Rose of West Memphis, Ark., ultimately finished in third place with a three-day haul of 62 pounds, 7 ounces. He had his best day of the tournament today, weighing in a limit worth 23 pounds, 14 ounces that outclassed his previous catches of 18-14 and 19-11.

Rose saw his fortunes change for the better when his jig bite turned on yesterday. Prior to that, he’d been catching them on about everything – “even the kitchen sink,” he said. “Yesterday they got off the fast-moving stuff and were holding tight to the bottom,” he said.

So he tied on a Strike King ¾-ounce football jig tipped with a Strike King Rage Craw, both in green pumpkin, and went to town. Both were rigged on a 7-foot Kistler heavy rod with 15-pound Seaguar line on a Lew’s Tournament Pro reel.

“That was the football jig setup,” he said.

His fish swam a little deeper for him today, prompting a switch to a Strike King 10XD on a 7-foot, 11-inch Kistler Mark Rose Offshore 10XD Rod with 15-pound Seaguar line. He used that in 23 feet of water from the launch point at Kenlake State Resort Park to the dam. That’s a change from most of the leaders, the majority of whom were running to Tennessee.

“I spent my time fishing,” he said.

Snider, Morrow round out top five 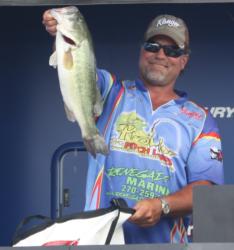 In fourth is Kevin Snider of Elizabethtown, Ky., with 60 pounds, 1 ounce over three days. Like Rose, he had his best day of the tournament today, bringing in a limit worth 21 pounds, 10 ounces.

He caught his bass this week on a homemade swimbait and earned $9,000 for his fourth-place finish.

In fifth is Sam Morrow of Smyrna, Tenn., with a three-day haul of 59 pounds, 13 ounces that earned him an $8,000 check. He caught his big bass on a 6-inch PowerBait Mullet in green and natural as well as a Zoom Magnum Trick Worm on a custom-made shaky head. 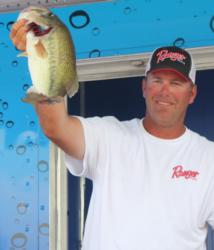 Rounding out the top 10 pros on Kentucky Lake: