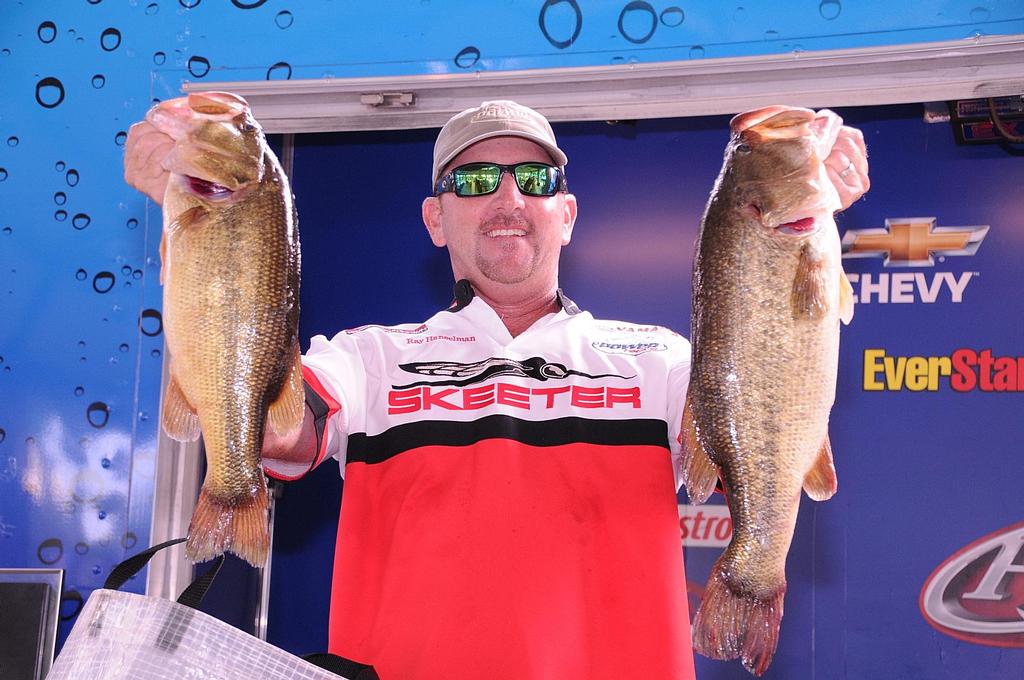 JASPER, Texas – After day one of the EverStart Series event on Sam Rayburn Reservoir it is apparent that the grass bite is a solid game plan, but to catch the quality fish bunched up, mining the deeper haunts is the way to go.

“It was an easy day at the office,” Hanselman said. “I caught what I weighed in by 9:30 and then backed off the sweet spot to kind of guard it. I let my co-angler catch a few out of there too, and he caught a big one that tied for big bass on the co-angler side. So I think there is a pretty good group of fish in there.”

Hanselman found the wad of big fish almost by happenstance. He fished the FLW Tour event last year at this time of year and finished 10th on a pretty generous deep spot. When he returned to check it this year, good fortune smiled upon him.

“I pulled up to check the spot from last year and my father-in-law, who was practicing with me, fired a Carolina rig completely out the other way and caught a 5-pounder,” Hanselman recounted. “Well, I eased over there to where he threw and I caught a 5-pounder, too. As it turns out, there is a bunch of big fish there. And the crazy part is, there is nothing on the GPS mapping where these fish are. The good looking stuff is over there where my original spot from last year is – not out there where they are now. It really makes no sense, but that’s fishing for you.”

Hanselman says he has no idea what to expect tomorrow.

“There could be a lot more like that there, I just don’t know because I backed off and fished some other stuff in the area,” he added. “But we’re going to find out tomorrow.” 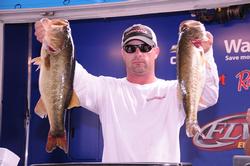 Wade Hudgens of Longview, Texas, is in second place with a five-bass limit weighing 23 pounds, 1 ounce.

Hudgens made the grass bite work for him, catching all his fish from 10 a.m. to 2 p.m. from the green stuff.

“I went to back to an area where I caught a bunch small ones in practice and the big ones showed up today,” Hudgens said. “I don’t know what the difference was. It did seem like there was more bait moving around in there today than the other day – almost like the bait is moving into the pockets.”

Hudgens said he did not save anything and was fishing for all he could get.

“On this lake you have to catch them while you can,” he added. “Trying to save fish for another day, especially in the grass, is a mistake. So I kept it to the floor and hit the area as hard as I could.” 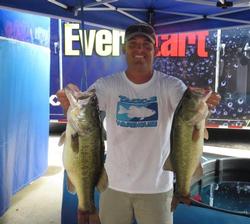 “I probably caught a 13-pound limit from the grass early,” Grice said. “Once I got to 13 pounds, I felt comfortable enough to go gamble on some of the deeper stuff and it paid off with two big bass that culled me way up.”

“That was my plan going in today,” Grice said. “Get a decent limit in the livewell shallow, then commit to the deep bite for upgrades and it worked out perfectly. Having a solid limit helps commit to that deep bite. So I’ll go with the same plan tomorrow.

Philip Crelia of Center, Texas, is in fourth place with a five-bass limit weighing 19 pounds, 8 ounces.

Crelia did his damage early fishing out deep then went practicing shallow.

“I had what I weighed in by 9:30 or 10 o’ clock,” Crelia said. “Most of them came off basically two deep spots. I didn’t get to practice much here this week so I spent the rest of the day fishing shallow, looking for something else but didn’t find anything that would help me. So I’ll probably be back to the deeper stuff tomorrow.”

Rounding out the top-10 pros in the EverStart Series event on Sam Rayburn Reservoir after day one:

Things did not start out so great for Knight initially. In fact, he did not catch a keeper until 1:30 p.m.

“I didn’t catch my first fish until 1:30 and then I caught my last fish on the very last cast of the day,” he said. “I got off to a late start, but it turned out for the best.”

Jack Knox of Seymour, Texas, holds down the third place spot with three bass for 11 pounds, 9 ounces, but one of those bass tied for big bass of the day in the Co-angler Division weighing in at 6 pounds, 11 ounces.

Shawn Simon of Jennings, La., is in fourth place among co-anglers with a five-bass limit for 11 pounds, 2 ounces.

Mike Power of Conroe, Texas, rounds out the top-five co-anglers with four bass for 10 pounds, 5 ounces.

Rounding out the top-10 co-anglers in the EverStart Series event on Sam Rayburn Reservoir after day one: