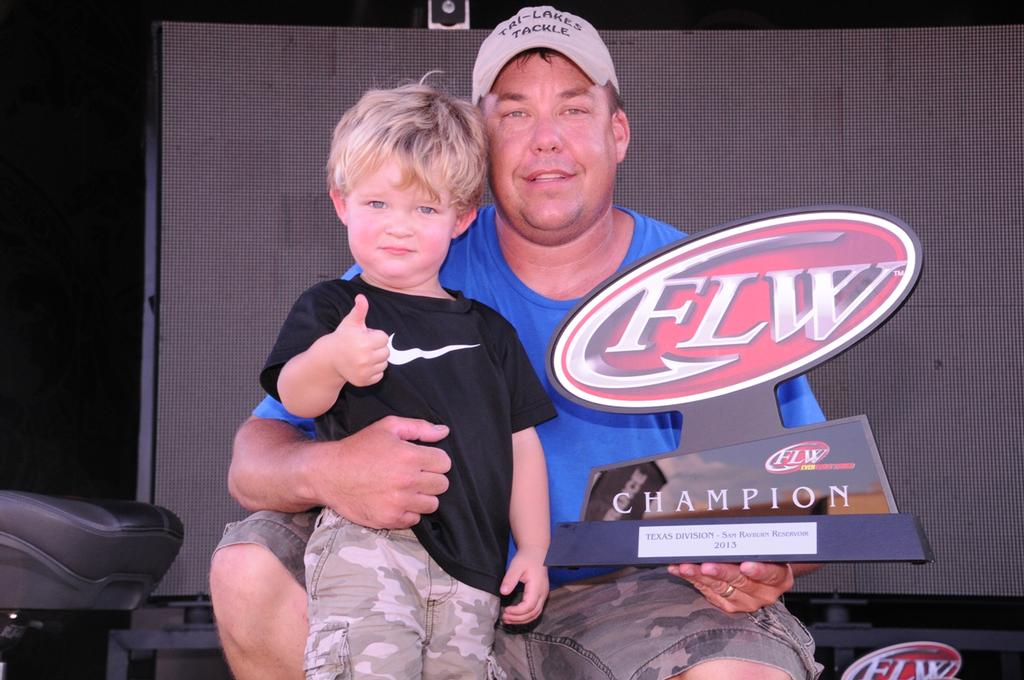 While competing against the top names in FLW Tour competition, Wells found himself in third place going into the last day. For a moment he had a chance at winning $100,000 against the best.

“And then I choked,” Wells said candidly. “I got caught up in the hype and hoopla and I just choked. Simple as that. I caught 8 pounds the last day and fell to 7th. And that was a huge eye-opening experience for me. People don’t realize the extreme mental pressure there is in this game – not to mention the physical strain. People who don’t think you have to be an athlete to do this, they’re wrong, because this is a very grueling sport. I experienced it firsthand last year and it got to me. Since then I have worked hard to get myself in the right frame of mind it takes to compete out year, so this win helps makes up for that. I feel like it’s progress in the right direction.” 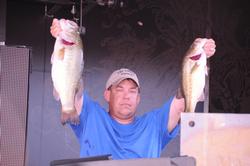 All week Wells’ composure was tested. After sacking 18 pounds, 15 ounces the first day, he went fishless for much of the day the second day and reached his breaking point. But he was able to right the ship and get back on his game, sacking 20 pounds, 12 ounces the second day to take the lead.

And today Wells was tested again. But this time he didn’t choke. He maintained the mental focus he had been striving for all year and brought in 18 pounds, 3 ounces to seal his first EverStart win with a three-day total of 57 pounds, 14 ounces for victory worth $24,881 and winning with over a 7-pound margin.

“At noon I lost a 5-pounder and I thought I was toast again,” he recounted. “But I put it behind me and at 2:35 I caught one over six that made up for it.”

“I have to thank the co-anglers I had this week,” he added. “Everyone of them kept telling me not to get sidetracked and to keep doing my thing. Some of these co-anglers have been in the boat with a lot of pros and they have seen where the wheels come off. All of my co-anglers helped point that out and kept me committed to what I came here to do.”

All week Wells fished north of the 147 bridge. His primary pattern was cranking creek channel bends and brush tops in 8 to 13 feet with crankbaits – a Strike King 6XD and a Norman DD-22 HD, both in shad colors. He cranked the baits on 12-pound Seaguar fluorocarbon line spooled on Lew’s reels.

Wells described his fish as “angle fish,” meaning cranking the bait down at the right angle relative to the cover was critical. 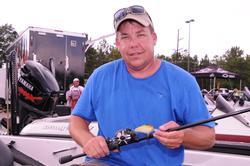 “Most of what I’m trying to hit down there is stumps or brushtops,” Wells explained. “The first morning I got lined up on the right cast and it was boom, boom, boom. The last two days, though, I had to keep rotating around the cover, making repetitive casts, cranking it down and hitting the stuff from different angles until I got them to bite. By no means was it fast and furious like day one. But I would crank all the way around the stuff. Today I actually didn’t get bit until I was 180 degrees different from my first cast.”

Wells was first to credit his family and friends for their support in his win.

“I’ve spent a lot of time down here the last couple of months preparing for this event and they have been super patient and supportive in allowing me to fish and I can’t thank them enough,” he added. 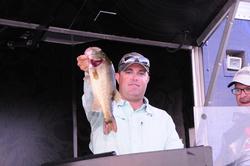 Kris Wilson of Montgomery, Texas, finished second with a three-day total of 50 pounds, 4 ounces worth $9,330.

Each day of the event, Wilson improved his standing, starting in 6th, moving to 4th and finishing in second.

Wilson’s primary pattern all week centered on classic Texas “drains,” or the small ditches that run out of a flat. He mostly cranked the drains with a Norman Deep Little N on 12-pound line.

“I caught a few flipping grass, too, but today I really got dialed in on the drains,” Wilson said. “I had about eight different ones I was fishing and I’d go all the way to the back of them until they bottomed out in about 8 feet of water – the back ends seemed to have a lot of bait in them. Then I’d just crank any little turn or corner in the back of those drains and catch a fish or two out of each one.” 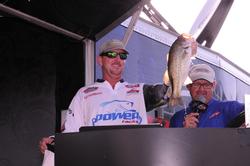 Ray Hanselman of Del Rio, Texas, finished third with a three-day total of 50 pounds even worth $6,220.

Hanselman tapped a school of big bass out deep on day one for the lead with 26 pounds, 4 ounces, but failed to connect with the school of brutes again.

“I fished out deep for about two-thirds of the day, caught three and then went to the grass to see if I could finish a limit, but ended up with four bass on the day,” Hanselman said.

When fishing deep, Hanselman relied on a 10-inch worm. When he went to the grass, he punched a Reaction Innovations Sweet Beaver teamed with ¾-ounce tungsten weight. 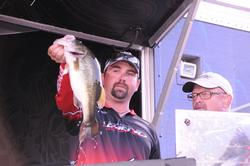 Philip Crelia of Center, Texas, finished fourth with a three-day total of 49 pounds, 1 ounce for $5,598.

During the week, Celia bounced back and forth between matted grass and outside place in 5 to 15 feet of water.

Crelia targeted the grass with a buzzbait, a Spro frog and punching the matted stuff with a 1-ounce jig. When he moved out he cranked brush with Strike King 6XD. 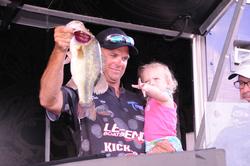 Todd Castledine of Nacogdoches, Texas, rounded out the top five with a three-day total of 46 pounds, 7 ounces worth $4,976.

Castledine fished a “little bit of everything,” with a Kicker Fish Tail-Slapper, a frog, a topwater, a crankbait and a jig.

“I was scrambling around fishing a little bit of everything, making the best of what I had,” Castledine said. “We had that rain earlier in the week and I don’t care if the water comes up two inches two feet, it does something weird to these fish. It’s like they go shallow and bite really well for a day and then they disappear.”

Rounding out the top-10 pros in the EverStart Series event on Sam Rayburn Reservoir:

Strike King Angler of the Year 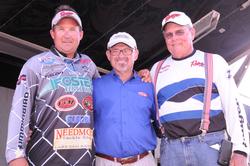 Congratulations to Stephen Johnston of Hemphill, Texas, who won the Strike King Angler of the Year award in the EverStart Series Texas Division with 774 points. His finishes this year included a third place at Amistad, a third place at Toledo Bend, a ninth place at Texoma and a 15th place at Rayburn. Johnston has now earned a 2014 Forrest Wood Cup berth on Lake Murray next August.