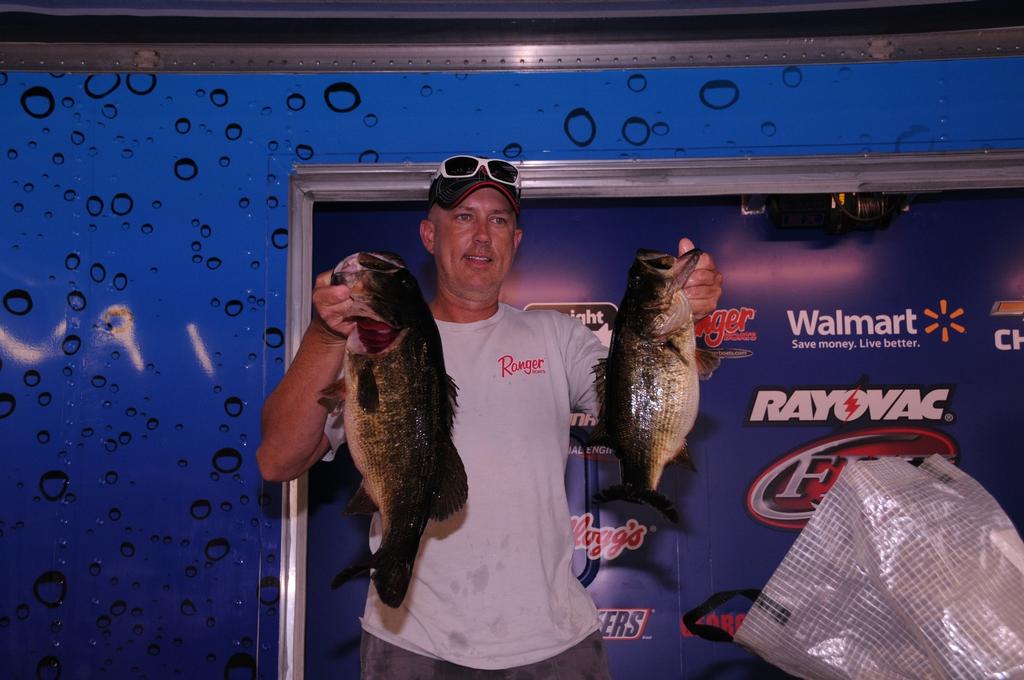 Over the last several weeks, Okeechobee catches have been plentiful and tournament weights have been strong. In addition, those practicing for the Rayovac FLW Series over the weekend found Okeechobee to be warm and bountiful. But high hopes could not quite overcome low clouds and low water temperatures. As a result, Okeechobee bass were less than cooperative on day one of the event.

At day’s end just one limit broke the 20-pound barrier and a three-way tie for 8th place at 15 pounds, 11 ounces told the tale: Okeechobee bass still have their lips poked out about the high-50’s water temperature and cloudy, drizzle didn’t exactly warm their hearts today.

Keith Fels of Ocala, Fla., leads the event with a five-bass limit weighing 20 pounds, 9 ounces. Fels has been quietly stalking the top-10 in Rayovac FLW Series events on Okeechobee over the last two seasons, posting a 10th place finish last year and a third place finish in 2012.

Fels said his catch came quick this morning and when he reached the 20-pound mark he felt he better leave the area before being seen there.

“I probably caught about 15 fish in my primary area,” Fels said. “There was one period of time when the sun came out for a while and they bit pretty well. And once I culled up to around 20 pounds, I figured I better leave so one would see me in this particular area.”

“I think there are more fish in the area,” he continued. “And instead of pushing the area hard I decided to try to manage what’s there and save it for tomorrow.” 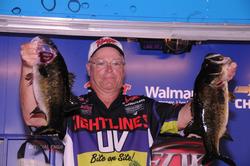 Thomas Helton of Charleston, Tenn., came close to the 20-pound mark with 19 pounds, 8 ounces, which put him in second place.

Helton held off going to his best area until later in the afternoon and it was a decision that paid off.

“I intentionally went to some areas that were not as good early because I really felt my best spot did not turn on until later in the day,” Helton said. “I didn’t want to get in there too early, get discouraged and then leave about the time they started biting. So I caught a couple of keepers elsewhere and then ran in there and ended up catching five better fish and culling twice. Moving baits were the key for me.”

Helton noted that once he gets into his primary place, he is committed to it due to water depth.

“It’s a long run through a lot of shallow water and once I sit down in there, I basically have to fish my way out for a few hours before I can get back out to deeper water,” he said. “That’s another reason I went there later. Once I get in there, I’m committed and I wanted to be committed during the warmest part of the day – not early when it was still rainy and cool.” 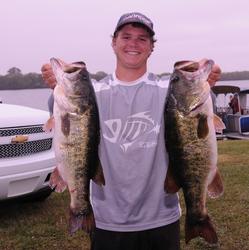 Jared is yet another member of the famous McMillan fishing family on Okeechobee, the younger brother of Brandon McMillan.

The younger McMillan said he was “casting and reeling” for his catch today, but it did cost him some bigger bites.

“When the water is cold like this, they just don’t get the bait as well and you miss some,” he said. “That’s just the way it is with the way I’m fishing. The warmest water I found today was 59 degrees, and it’s just not quite enough to make them really eat. But I think it’s going to get better in the next couple of days with warmer water. I’m getting plenty of bites, it’s just getting them to really eat it good that’s the issue.” 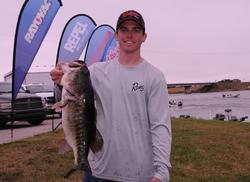 Dial fished the BFL event here a week ago and caught 17 pounds, 3 ounces to finish 15th. Given his catch today, he figured he would be in about 15th again. No one was more surprised than him.

“The top five? I can’t believe it,” Dial said. “When you look at those BFL results last week with four limits over 20 pounds and several in the 19-pound class, it’s like a completely different lake this week.”

Dial said he ended up fishing in the area where he fished the BFL again today.

“I have not been back there since Saturday,” he said. “I spent most of the week looking for totally new places. But when a lot of those places didn’t pan out, I ended up going back and catching some fish out of there.”

Dial noted that he is flipping, but not in the hyacinths like a lot of people are doing.

“I never made a true cast all day,” he said. “It was all straight flipping for me, but not the traditional hyacinth punching that this lake is known for, it was something a little different. I didn’t have a fish until 11 o’clock. I caught maybe nine fish on the day and half of those came in a little period when the sun popped out – it was like a switch – I boated five fish in that little time the sun was out.”

Vu Au of Tucson, Ariz., rounds out the top five with a five bass limit for 16 pounds, 3 ounces.

Lee Haas caught the big bass in the Pro Division on day one weighing 8 pounds, 6 ounces. 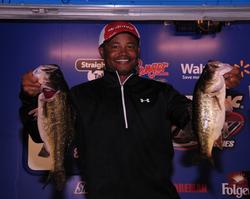 “I didn’t have a fish until about noon,” Green said. “I caught my first keeper and things just seemed to accelerate from there. There was not one particular lure that seemed to work better. I caught one on this and one on that, kind of a junk pattern I guess. I’d catch one on a lure, put it down and catch another one on something else.

Jeremy Ferguson of Saraland, Ala., is in second place with 12 pounds, 11 ounces.

Johnny Pittman of Albertville, Ala., is in third place with 12 pounds, 10 ounces.

Danny Grissett of McDavid, Fla., rounds out the top-five co-anglers with 12 pounds, 1 ounce.

Mike Evans of Deatsville, Ala., caught the big bass in the Co-Angler Division on day one weighing 10 pounds, 8 ounces.