Schultz bolts to the lead at Guntersville

Midwesterners on top down South 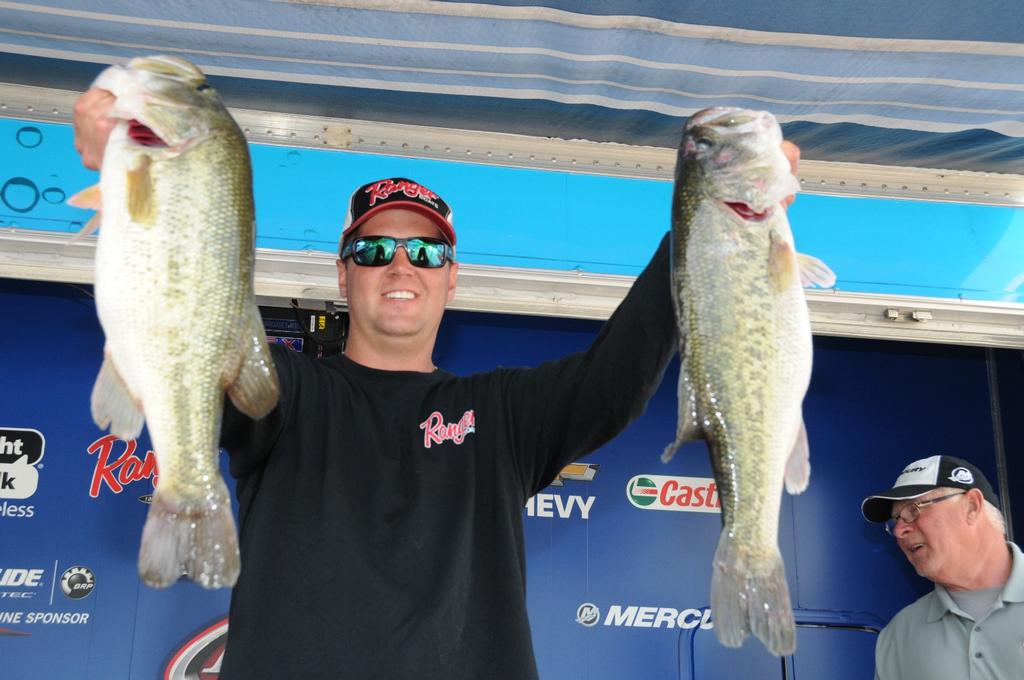 GUNTERSVILLE, Ala. – Amazing. Mindboggling. Stunning. A bass fishing miracle. Call it whatever you want, but there is no denying that God created Lake Guntersville for bass anglers.

On day one of the Rayovac FLW Series Southeast Division event presented by Mercury a total of 39 limits surpassing the 20-pound mark crossed the stage. And let’s say you rolled into weigh-in with about 18 pounds – a solid sack of bass on many lakes in the country – it would have landed you in 60th place.

To say Guntersville bass are “scattered” right now would be an understatement. This morning several of Guntersville’s best locals adamantly declared that they would hold zero advantage in this event. With so many bass using so many areas and depths right now, it would be anyone’s game. Big limits are subject to come from 5 feet of water in bedding areas, 12 feet of water on offshore structure or anywhere in between.

That point was well proven at the day one weigh-in when Eric Schultz of Minnetonka, Minn., hauled in 27 pounds, 7 ounces to take the lead.

Behind him, Ron Nelson of Berrien Springs, Mich., is in the second place spot with 26 pounds, 3 ounces.

Schultz said he had to utilize a number of “one fish spots” to assemble his bag.

“I caught my three biggest ones off of three completely different spots,” Schultz said. “I can’t just sit on any one place and really catch them. It seems like if you catch one or two off a spot, that’s it.”

Schultz described his best spots as being “out,” but not “out” as in all the way to the river channel.

“Most of my places are outside places, but still within bays or pockets – mostly breaks not necessarily related to the main channel,” he added. “I have one place where I can catch multiple fish, but the best I can get off of it is maybe 15 pounds. All my big ones came from single-fish places today.” 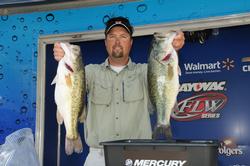 Nelson said he spent a majority of his practice fishing out for post spawn bass, but when his offshore efforts proved futile, he moved up on the bank on the final afternoon of practice and began seeing decent size fish on beds.

“One of my good ones today came sight-fishing, but two of my other big ones came by just pitching and casting a beaver-type bait in areas where I had seen big ones on beds,” Schultz said. “So I have caught some sight-fishing directly, but some others were from blind-casting in bedding areas inside pockets.” 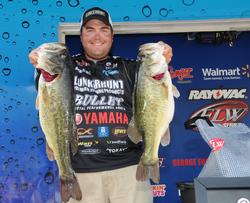 Neal has found a single place that is producing most of his fish.

“I’m fishing out, but I’m not fishing deep, per se,” Neal said. “I’m fishing the first drop along a big spawning flat in a major creek in 6 to 8 feet of water,” Neal said. “There is grass and wood along the break, holding the fish. Most of them are post spawn fish, but I did catch one big prespawner there today.”

Neal said most of his fish are coming off a Lunkerhunt Swim Bento swimbait along the drop. 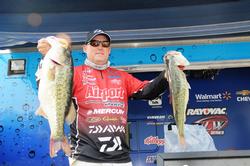 Robert Behrle of Hoover, Ala., is in fourth place with a five-bass limit weighing 25 pounds, 1 ounce.

Behrle has located what he calls a “sweet spot” in 12 feet of water where both pre and post spawn fish are migrating to.

“I’m fishing a big area and I’ll catch one here and one there,” Behrle said. “But there is this one patch of grass in about 12 feet of water that is really producing the numbers. Every time I make a pass through that particular spot I catch several. The last time I passed through there today I culled a couple of 4 pounders and I figured I better lay off it and see if I can save some for tomorrow.”

Brad Carroll of Hiram, Ga., rounds out the top five with a limit weighing 24 pounds, 13 ounces. 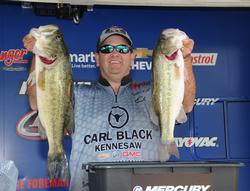 Like several other leaders, Carroll has found his fish to still be back in pockets and coves and not out of the main drag yet.

“All my fish today were post spawn, laid out and skinny,” Carroll said. “They’re still back in pockets in 6 to 12 feet of water and have not reached the main river yet. And I can’t really catch them anywhere ganged up. I caught 20 keepers on the day, but I had to visit eight or nine places to catch those. It’s one here, two there. I had one place where I caught four and that’s the most I’ve caught off one spot.”

Mark Rose and Bryan Gustafson shared the big bass honors in the Pro Division on day one at 7 pounds, 9 ounces. 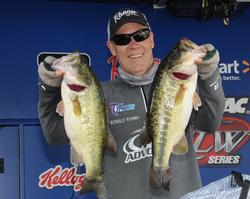 Barry Holt of Sheffield, Ala., is in fourth place with 19 pounds, 11 ounces.

Wendy Kmucha of Harrisburg, Ill., caught the big bass in the Co-Angler Division on day one weighing 8 pounds, 4 ounces.