Grover Gets ‘Em on the Delta 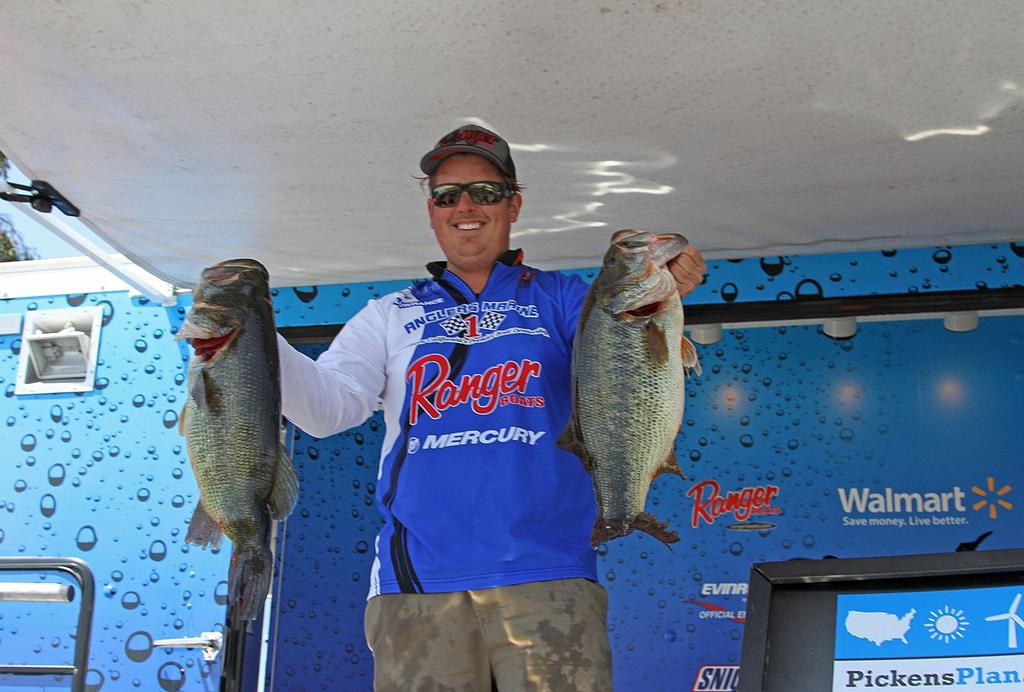 BETHEL ISLAND, Calif. – Often we hear lamentations of “You don’t know what you have until it’s gone.” Well, for Kyle Grover, currently leading the Rayovac FLW Series Western Division event on the California Delta, he didn’t know what he had until he took a closer look.

The pro from Trabuco Canyon, Calif. placed 15th on day one with 18 pounds, 10 ounces, but he made a big move today by taking over the top spot with a limit of 27-10, which pushed his 2-day total to 46-4. Grover’s day-two catch – second heaviest of the second round and third-heaviest of the tournament – came as a pleasant surprise.

“It was all about the area I was in,” Grover said of his day-two success. “I found it during practice and I 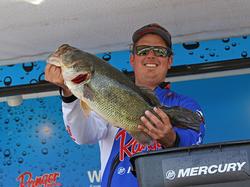 didn’t really realize what I had until yesterday. I pulled up there yesterday and spooked some big ones away. I thought (today) that if I left them alone and made long cast to them, I could catch them.

“Guys throw really heavy line here and they say it doesn’t matter, but I put on some smaller line and caught them. Long casts were the key.”

The two biggest fish in his sack – both close to 10 pounds – fell for plastics fished very slowly.

“It was a small bait and I was just dead-sticking it up there where they were,” Grover said. “It was a finesse presentation.”

Grover, who caught his other fish on reaction baits, said that nabbing one of his big fish late morning helped him settle into a productive rhythm. 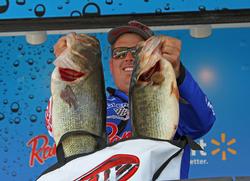 “I caught the first one probably about 10 o’clock and that calmed me down,” he said. “My co-angler caught a couple of big ones behind me in the morning and (catching my big fish) calmed me down.

“I went and just fished and had fun after that. I went and wound around in other areas and caught a couple more good ones on reaction baits. I came back to my main spot and caught that second big one in pretty much the exact same spot around noon.”

Grover described his key spot as a staging area near a spawning pocket close to a main channel. By his observation, the fish were using this area for prespawn staging, and post-spawn transition. Abundant bluegill beds in the area provided a food source that further attracted the bass.

“The two biggest fish weren’t bed fish – they were just swimming around up there,” Grover said. “I think one of them was a prespawn fish and the other one was post-spawn. It’s just a good little stopping spot where they to go and from.”

Day-one leader Roy Hawk yielded the top spot today, but his was only a minor slide and the pro from 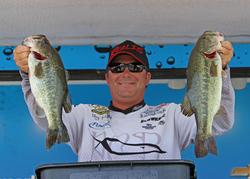 Lake Havasu City, Ariz. enters the final round trailing the lead by only 9 ounces. Pairing his day-one weight of 29-11 – the heaviest thus far – with 16 today, gave Hawk a total of 45-11.

“Yesterday, my big fish were bed fish and obviously they were gone today,” Hawk said. “I saw some other fish in that area, but they wouldn’t lock down. So, the rest of the day, I put the trolling motor down and just fished and fished and fished. We spent half the day fishing and never cranked up the big motor.”

Hawk said he fished a variety of baits today, none of which really outshined the others.

“I threw mostly a topwater, but I did so many different things,” he said. “I threw a worm, I cranked – just a bunch of different things. Each little situation I came to across I tried to adapt to it.

“I caught probably 20 fish today – just no big ones. I don’t think I lost anything that would have mattered. I got a real lucky upgrade right before I had to come in – that was a 3 1/2- or 4-pounder.”

Notably, Roy Hawk will join Sunny Hawk – his son – in the final round, while pro brothers Vu and Tai Au continue the family theme by entering day three in fourth and 10th places, respectively. 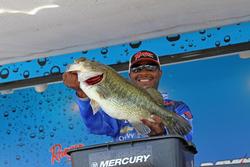 The dominant performance of day two belonged to TBF National champ Mark Daniels, who bagged the heaviest limit of the day (second-largest of the event), a 28-pound, 4-ounce sack that moved him up from 21st place to third with 45-11. Daniels’ bag included a 10-14 that earned Big Bass honors.

“It was a mixture of things today,” the pro from Fairfield, Calif. said. “There was one here, one there. I got very fortunate and had two big bites today that I didn’t have yesterday. That was the difference.”

Daniels, who described his tactics as “junk fishing” said he used a combination of topwaters, reaction baits and plastics. He had to fish several spots to find his limit and the action seemed to pick up as the morning’s high tide started to fall.

Of his TBF title, Daniels said: “The combination of FLW partnering with TBF is just an amazing deal. It gives somebody like me the opportunity to travel the country and fish these amazing fisheries we have in the United States, study abroad and hopefully transform into the full-time pro that I want to be.”

He slipped a spot on day two, but Arizona pro Vu Au earned the distinction of being the only angler to 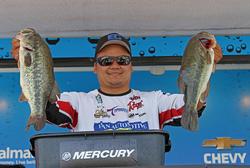 break 20 pounds on days one and two. He opened by placing third on the first day with 25-3 and followed today with 20-1. With a total weight of 45-4, he’ll enter the final round in fourth place.

“I had my limit by about 10 o’clock and then I went around punching, flipping, flipping and trying to get a big bite, buy I couldn’t seal the deal,” Au said. “That’s what you have to do out here.”

Au said the big wind that blew most of the day really limited his ability to hold on a spot and work it thoroughly. Canals with grass were his primary targets.

After placing 17th on day one with 18-8, Benjamin Byrd, of Moab, Utah, sacked up 21-15 on the second day and rose to fifth place with a 2-day total of 40-7. Byrd said he found most of his weight in the latter hours of his fishing day.

“I had a little period at the end there and I was able to string something together, so I’m happy,” Byrd said. 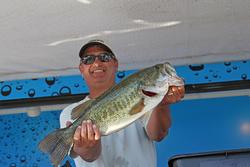 A key change on day two enabled Rob Larrabee, of Livermore, Calif., to move up from seventh place to the top spot in the co-angler division. Larrabee caught 14-4 on day one, added 16-1 on day two and took over the lead with 30-5.

“I started with the bait that was working yesterday (Texas-rigged watermelon red Brush Hog) and I couldn’t get bit,” Larrabee said. “I changed to a dropshot and got a 6 1/2-pounder about 8 a.m. I couldn’t get bit on that bait again, so I went back to yesterday’s bait and started catching them.”

Larrabee said he and his partner were flipping docks in a marina and he took every opportunity afforded to him. His dropshot bait was a 6-inch Roboworm in the margarita mutilator color.

Matthew Bynum, of Concord, Calif., placed second with 29-0, while Darren Vieira, of Martinez, Calif., took third with 28-15. Chris Shrader, of Mountain Home AFB, ID placed fourth with 28-6 and Troy Stokes was fifth with 28-1. 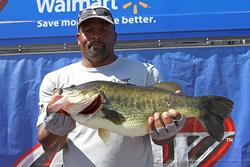