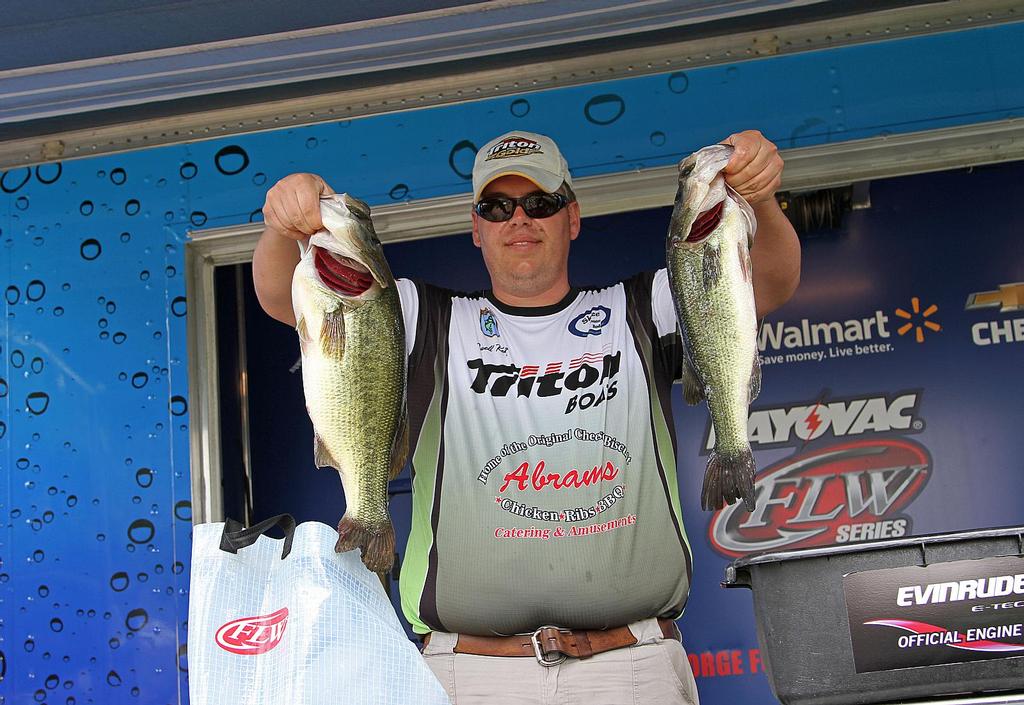 Catching a big fish not long into his day propelled William Kemp to the day-one lead. Photo by David A. Brown. Angler: Powell Kemp.
June 19, 2014 • David A. Brown • Toyota Series

MARBURY, Md. – Starting his day with a big fish gave William Kemp a ton of confidence and no doubt helped him relax en route to topping day one of the Rayovac FLW Series Northern Division event on the Potomac River.

Kemp, who caught a limit that weighed 19 pounds, 2 ounces, reported a rather lackluster morning bite. However, the bites he got were quality fish – including the 6-10 that bit at 8 a.m. and ended up earning Big Bass honors for the Scotland Neck, N.C. pro.

“Overall, it was pretty slow this morning and the fish bit better this afternoon,” Kemp said. “I just caught 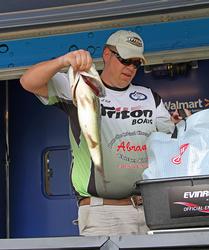 a couple of key big ones this morning. It was a slow bite, but I got the right bites.”

His big fish, he said, energized him and filled him with enthusiasm that was “through the roof.”

Kemp said that his morning fish bit Zoom Brush Hogs that he was flipping into grass. Later in the day, the fish seemed to become more interested in feeding.

“It just seemed that the fish switched up when the tide got higher – they got a little more active and aggressive,” he said. 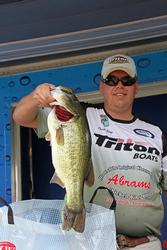 Kemp fished within 15 miles of the takeoff site in Mattawoman Creek. He mostly targeted submerged grass.

Success on day one was particularly rewarding for Kemp, given the challenging conditions he faced in the days preceding he tournament.

“My practice was pretty slow,” he said. “I only have a few places where I can get bit. It was just staying with them and beating them out.

“This afternoon when the fish became more active, it became fun. But this morning it was just a grind.”

Kemp said the cloud cover that settled in by midday was a welcome respite from the brutally hot, still conditions he experienced in practice.

“Those clouds came in and cooled it off a little bit,” he said. “I think that did help the bite.”

Wilder winds up in second

Second-place pro Gregory Wilder, of Brooklyn Park, Md. said his limit catch of 17-4 was no cake walk; in fact, it was a one-here, one-there kind of deal. Wilder noted that two key bites – one fish over 5 pounds, another over 4 – were the game-changers.

“I feel blessed to catch what I had today,” Wilder said. “My practice was terrible. I never really found the big fish in practice, so I’m just happy I was able to put together two good bites today.”

Wilder said he caught fish on both tide stages. On low water, he caught them on a buzzbait, while a Chatterbait worked best on high water.

The day’s alignment of tide stage and early cloud cover, Wilder said, lined up favorably for him.

“I think the big thing was having low light and the low water in the morning,” he said. “This draws fish to the outside edges.” 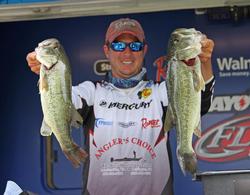 beaming pride over a solid stringer of 16 pounds, 5 ounces that took third place, and the white bandage wrapped around his bare left foot.

“Who said fishing isn’t a contact sport,” the Virginia pro joked. “I got stabbed by a catfish spine and spent last night in the emergency room. My foot was twice as swollen as it is now.”

He said he junk-fished through the day and took advantage of two windows of opportunity. He worked a variety of habitats, but noted that hard cover was a key element when the tide got high.

“It was basically the last hour of the outgoing and the first hour of the incoming tide,” Shelton said. “These periods were feeding frenzies and then the rest of the day was mostly reaction bites.”

Fouth-place pro Robert Grike, of Dumfries, Va. sacked up a limit that went 15-14. For him, the key was running the tide to stay on his ideal window – essentially, the latter end of the outgoing tide and then the beginning of the incoming.

“I kind of worked the tides to my favor,” he said.

Grike caught his fish by targeting hard cover in the morning and grass in the afternoon on high water. He caught his fish on shaky heads on hard cover and, in the grass, he flipped a Texas-rigged plastic on a 1-ounce weight into milfoil. He also fish a flick shake worm around the milfoil. 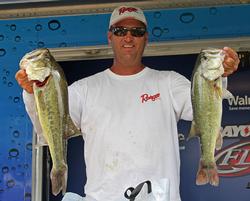 Chris Baumgardner, of Gastonia, N.C., reported catching about 20 fish scattered throughout the day’s tide schedule. He had spots for low water and others for high water. Combining the effort yielded a limit that weighed 15-1.

“The fish are grouped up and when you get around them, you can catch them,” he said. 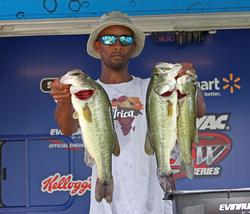 In the co-angler division, Kermit Crowder, of Matoaca, Va. leads the field with 15-8. For him, the action started when the early morning’s falling tide turned and started its upward movement. 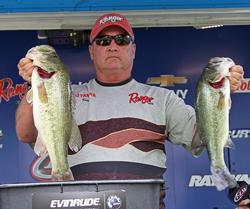 “I caught all of my fish on the incoming tide,” he said. “I caught all throughout the rest of the say and that kept it interesting.”

Out of courtesy to his pro partner, Crowder declined to reveal where he caught his fish, but he did note that a particular type of habitat proved consistently productive.

“It was very precise; very technique-specific,”

Crowder said he ended up catching his keepers on flipping baits and finesse rigs. He missed a couple of early opportunities when big fish blew up on his topwater frog.

Michael Bahnweg, of Union Dale, Pa. and Jeremy Ives, of Burgaw, N.C. tied for second with 14-13 apiece. In fourth place, Johnny Clark, of Fredericksburg, Va. had 14-9 and fifth place went to Gabriel Scott, of, Ruckersville, Va., who had 13-13. 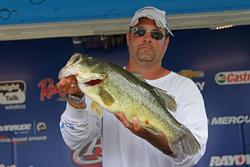