Vaughan Stakes His Claim on the James 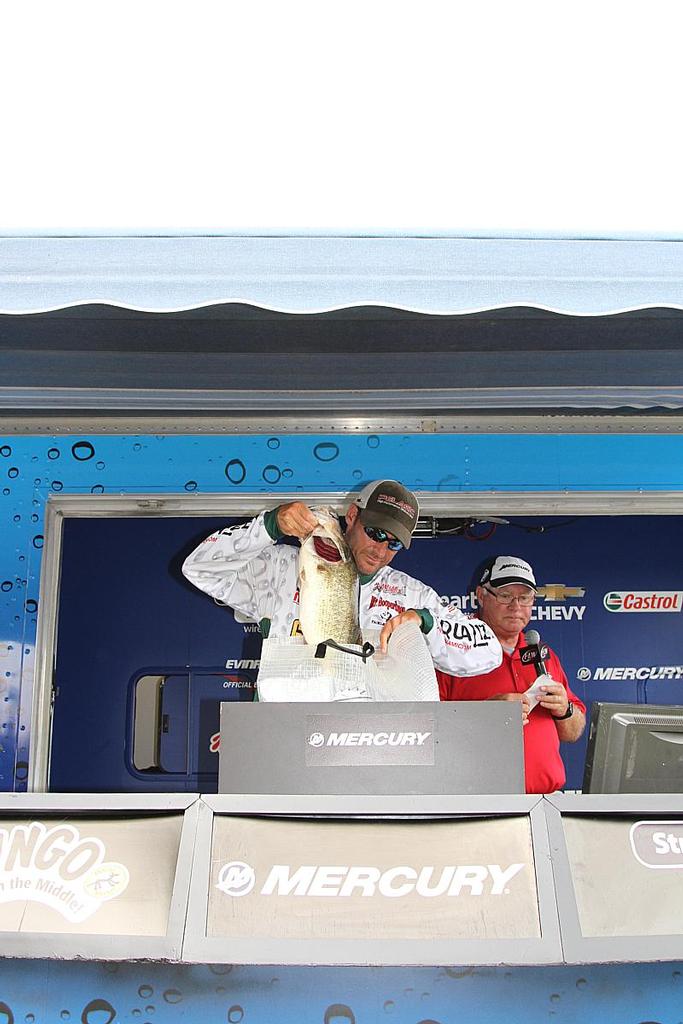 RICHMOND, Va. – He couldn’t figure out the entire puzzle, but the pieces that Wayne Vaughan mastered earned him the day-one lead with 23-7 at the Rayovac FLW Series Northern Division event on the James River.

A tidal fishery, the James River sees daily water level fluctuations that position fish and greatly influence their feeding tendencies, much the same as dam current stimulates impoundment bass. Today, Vaughan and the rest of the field started with about an hour remaining in the outgoing cycle.

That falling water is typically a key fishing period for a lot of reasons. First, diminishing 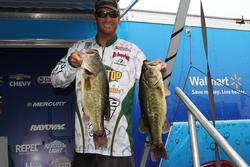 water concentrates bass into remaining depths and thereby makes them easier to target. Also, with all the baitfish and crustaceans pulled out of shoreline cover, those bass are keen to feast on all that vulnerable forage.

On the other hand, incoming tides deliver more challenging scenarios as bass have increasingly vast areas in which to hide. Add to this the reality that strong James River tides tend to scream on the rise and that water momentum discourages bass from venturing far from current-breaking cover.

Because of his later flight, Vaughan missed most of the key early morning bite, so he struggled through much of the morning but finally got going in the afternoon when the tide started to fall again.

“Once the tide started moving out, that was the key for me,” Vaughan said. “I caught some this morning but out of the ones I caught this morning, I only weighed in one today.”

Vaughan said he started his day by catching a limit south in the Chickahominy River and then came out to upgrade in the James. The decision to change areas, he said, was prompted by a gut feeling that better quality awaited him elsewhere. 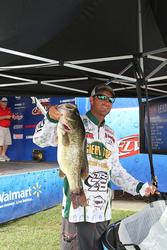 “Practice has been super, super tough,” Vaughan said. “I felt like I had a good little bag, but I didn’t want to sit around there (in the Chickahominy) and fish anymore, so I ran out to the James and I ended up catching some nice fish there.”

Vaughan said he caught his fish on plastics of a particular color, but declined to elaborate on rigging and presentation. He did say that his success was due to particular grass scenarios with strategic tidal influence. This, too, was too specific for him to reveal, but Vaughan did say that paying close attention to surroundings was essential.

“It’s a mixture of the vegetation and what the tide’s doing,” said the pro from nearby Chester, Va. “I had three or four spots that I knew were pretty good and then I just went fishing around to see if I could find something else.”

As it turned out, Vaughan did most of his damage on a single spot. When he got on the key bank, he said he instantly recognized the winning combination of habitat and tidal flow.

“I live here, so I fish the river a fair amount,” he said. “What I figured out was that this was a timing deal. These fish are not eating like that continuously. The water’s hot and it’s summertime. If you can get the timing right and you’re around the right thing, anybody out here can catch them.”

Kelly Pratt, of Williamsburg, Va. trails Vaughan in second place by a pound and 5 ounces at 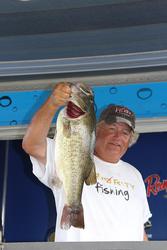 22-2. He was one of the few anglers who reported catching fish throughout the day’s tidal range.

The morning’s low period and then the late-afternoon outgoing cycle proved most productive, but he also caught fish during the incoming water, which dominated the day.

Pratt said he caught his fish on crankbaits and plastics. The latter was his main offering during the less productive midday period. Presentation strategy, he said, was essential.

“The key is fishing very slowly,” Pratt said. “These fish are not very active during that incoming tide, so you have to fish really slowly.” 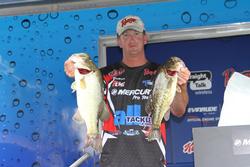 Bryan Schmitt, of Deale, Md. has plenty of experience on tidal fisheries, but for much of today, the James River gave him fits. Fortunately, when he found bites, they were good ones and his 18-13 earned him a third-place finish.

“I caught two quality fish in the first 30 minutes and then it just died,” Schmitt said. “The last hour, I caught about 10 more fish and upgraded.”

“There’s a certain thing I’m looking for and if I see it, I can usually catch a couple,” he said. “It’s depth and habitat that I’m looking for. It has to be a mix of things.”

Schmitt said his best bites came early and late, with a lot of frustration in the middle.

“I ran north, south, east and west and everything in between,” he laughed. “I couldn’t catch nothing. Today, I just got a few big bites.” 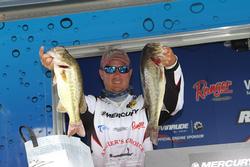 place. His productivity he said was a matter of knowing when to stay and when to go.

“For once today, I timed things right with the tide,” Shelton said.

By that, he referred to his strategy of “running the tide” – progressing farther along the river to stay with a certain period in which his bites were coming.

Shelton caught his fish on wood with a flipping baits and topwaters. 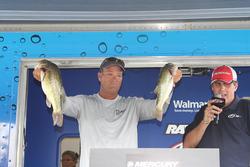 Chris Baumgardner, of Gastonia, N.C., sits in fifth place with 15-2. He, too, struggled with the midday doldrums, but he took advantage of his opportunities early and late.

Targeting blowdown trees, he caught his fish by flipping and fishing chatterbaits. 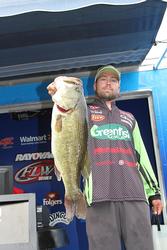 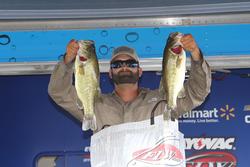 In the co-angler division, Michael Crocker reached into his bag of local tricks and ended up catching a bag of bass that topped his field at 12 pounds, 12 ounces. He basically flipped a 4-inch Texas-rigged Dead Ringer worm around cypress knees and did his best to make his presentations as irritating as possible.

“We went back in a couple of little creeks hitting the trunks of the trees,” Crocker said. “That’s a local favorite – an old-timer secret.”

Crocker rigged his purple/blue flake worm on a 2/0 round bend hook and a ¼-ounce weight. He was catching most of his fish in two to four feet of water.

“I only had five bites but at least four of them were the right ones,” he said. “The very last part of the incoming tide and I even caught some on dead slack tide. I think the smaller finesse worm helped and getting it right up in the trunks of those trees.” 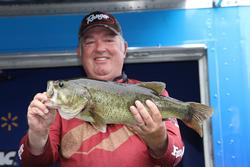 Day two of Rayovac FLW Series Northern Division action on the James River continues at Friday’s takeoff, scheduled to take place at 6:30 a.m. (Eastern) at Osborne Landing, which is located at 9680 Osborne Turnpike in Richmond, Va.