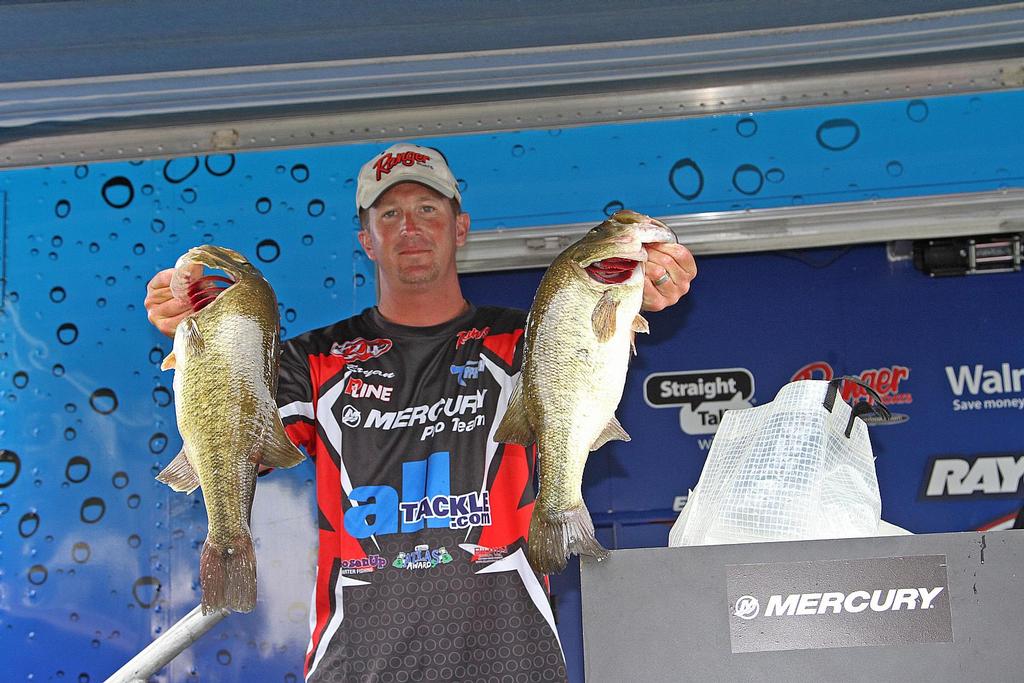 RICHMOND, Va. – Bryan Schmitt, of Deale, Md. chuckled as he recalled the joy of catching a 12-inch largemouth bass, but that little squeaker, plus its twin were just enough to push him into the day-two lead with 37 pounds, 7 ounces at the Rayovac FLW Series Northern Division event on the James River.

As Schmitt explained, his day started off strong with a trio of hefty bass – including a 7-5 that earned Big Bass honors and anchored his limit of 18-10. But as the morning’s low tide turned and the water began rising, that opening flurry shut down. For the next several hours, his day was a lesson in frustration due to conditions that differed from day one.

On a day that saw cloudy skies contrasting the mostly sunny conditions of day one, the tide 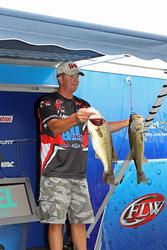 schedule brought low water in the morning and a strong incoming cycle for most of the day. Later flights caught a piece of the afternoon incoming cycle, but the opportunity was brief.

For Schmitt, the best part of his day came within an hour of takeoff. After that, he tried every trick he knows with only minimal results.

“The only place I saw big fish, I went to every day in the morning because I only had one hour of low tide,” he said. “To catch the fish, you had to be there on low tide. It’s over in an hour.”

Targeting a bend in the James River where a pocket of deeper water provides bass with a low-tide fallback area, Schmitt caught most of his fish on reaction baits. His strategy, Schmitt said, is depth related.

“I’m a little bit deeper I think than most people are fishing,” he said. 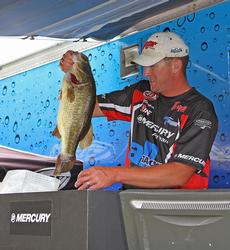 Now, here’s where the little fish made him Bryan Schmitt give a spirited fist pump on the water. After several unproductive hours, he finally nabbed a fourth fish that just met the 12-inch minimum length. With time ticking away, Schmitt was worried that he might actually miss his limit.

“It was 2 o’clock and I was like ‘I can’t believe you’re going to weigh in four fish and use those big ones,” he said. “Then I caught another 12-incher and I’ve never been happier.

“I was running by the seat of my pants. I don’t know this river that well but I’m going to where I think big ones are.”

With tide schedules advancing about an hour each day, Schmitt is optimistic that his spot may yield even more weight tomorrow. Add to that the fact that he’ll be the first boat to take off on day three, he believes he’ll be in a good position early to make a final push to protect his lead.

“I’m hoping tomorrow is better because we’re going to have two, maybe three hours of good tide in the morning,” he said. I got three big bites there this morning and two big bites there yesterday. If I can get five of these jokers, I could really have a good day.”

Kelly Pratt, of Williamsburg, Va. held on to the second-place spot on day two. His limit 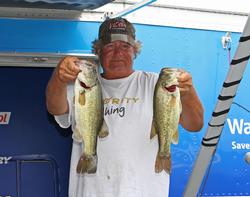 “I had to do something different today,” Pratt said. “It clouded up and my fish moved away and I had to chase them down. In the last hour of fishing, I culled everything I had.”

Pratt used the morning’s low water period to work the outside edges of shallow cover and as the water rose, he moved to the inner areas. Pratt said he missed to big fish in the 6- to 7-pound range earlier in the day, but he got some redemption with a big bite late in the day – a 4-pounder.

“I just got lucky and stumbled in on a bunch of fish today,” he said. “I caught most of my fish from about 1-2 p.m. and then I had a little period at the end of the day. As soon as the tide stated pulling out, they started feeding.”

Sitting 2 pounds, 5 ounces off the lead, Pratt said he’s hoping his fish-management strategy pays off. He placed second yesterday with 22-2, but laid off his fish today in hopes of benefitting more from his spots in the final round.

“I have to areas I haven’t even touched yet, so I hope I can catch them,” Pratt said. “I figured if 13 pounds would get me into the cut I didn’t need any more than that.” 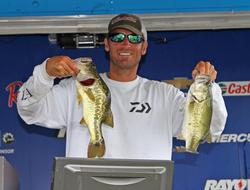 Day-one leader Wayne Vaughan was clearly impacted by today’s tides. He jumped out to the early advantage yesterday with a limit that went 23-7, but today managed only a modest limit of 9-13 for a total of 33-4.

For Vaughan, it was a timing issue. His day-one schedule allowed him to fish the critical stage of the afternoon outgoing tide. Today, he had none of that.

“It was a totally different day for me today,” Vaughan said. “My stuff is totally tide oriented. I had a late boat draw yesterday and today I didn’t.

“I thought I could get some bites in the morning and be ok. I didn’t think I could catch that kind of weight again today, but maybe I could get a decent bag. But it didn’t happen; I just didn’t get those bites.”

Vaughan said he just scratched around and caught his fish pad fields with a swimbait, swim jig and frog.

Snickers pro Chris Baumgardner moved up a notch to fourth place today, but it was no easy 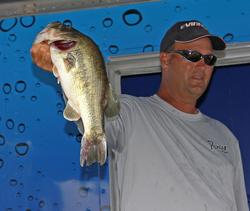 “It was a lot slower today,” Baumgardner said. “I didn’t get half the bites I got yesterday and most of them were small. I just got lucky and caught a 4-pounder right there at the end of the day and I got what I got.”

For most of the day, Baumgardner fished a chatterbait around various shallow cover and scratched out a handful of small keepers. He caught his big fish on a jig around 2:30 while fishing shallow. 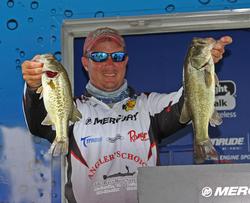 William Shelton III, of Lacrosse, Va. did most of his day-one damage during the afternoon outgoing tide, but today, his early flight denied him a shot at this favored stage. Shelton struggled but managed a limit of 9-3 as he dropped a notch from fourth to fifth with 26-1.

“I definitely had to make some adjustments today,” he said. “Yesterday, I had a window the last hour but they were more scattered today with the higher tide that I was fishing.”

Shelton said he had to cover more water today and caught scattered fish flipping. He was able to get a little of the afternoon’s outgoing water and caught his two best fish in the last 30 minutes of his day. 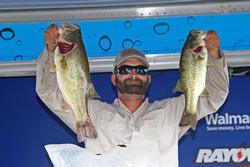 different set of tactics each day. However, day-one leader Michael Crocker got a rare treat today when his boater fished a scenario nearly identical to the one that the co-angler from Pasadena, Md. fished a day prior.

That pattern of close-range flipping to flooded trees netted him a day-one limit of 12-12. Today, he followed with 11-2 and retained the lead with a total weight of 23-14 and a lead of 4-1.

Crocker flipped a 4-inch Texas-rigged Dead Ringer worm around tree trunks. The color was purple/blue flake and Crocker rigged the worm on a 2/0 round bend hook with a ¼-ounce weight.

“I was very fortunate that I was able to fish the same technique today,” Crocker said. “We did for a little while hit some grass lines, which I love to do. That didn’t produce, so we went back to the timber and it worked out well.” 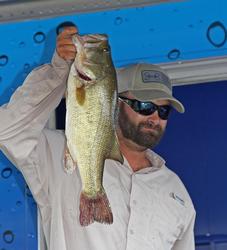 In addition to accounting for his division’s heaviest bag for the second time, Crocker’s technique also nabbed the day’s Big Bass, which went 5-5.