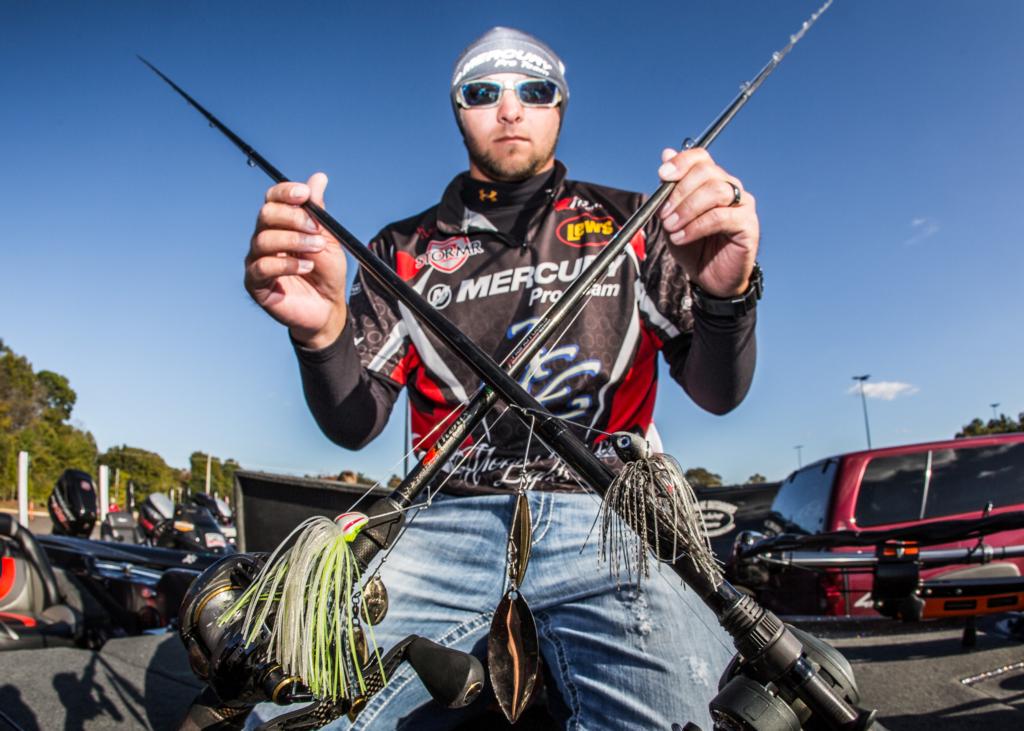 ROGERSVILLE, Ala. – Wood was almost as important as water here in the Rayovac FLW Series Championship on Wheeler Lake Halloween weekend as most of the top 10 were keying on shoreline wood cover to build their stringers. By the final round of the three-day event, most anglers were beating the banks with spinnerbaits, shallow-running crankbaits, umbrella rigs and a variety of soft plastics.

Despite his young age, Zack Birge fished with the poise of seasoned veteran to win the title. Birge steadily climbed the rankings duringthe event and added more to his cumulative weight each day. The 23-year-old Oklahoma resident racked up 47 pounds and walked away with the $50,000 top prize.

Birge threw two spinnerbaits in the championship event to earn his title: a 1/2-ounce River2Sea Bling spinnerbait and a ¾-ounce Santone spinnerbait. Both were in a sexy shad type color.

You can read the full story of Birge’s win here.

Here’s how the rest of the top 10 found success on Wheeler Lake. 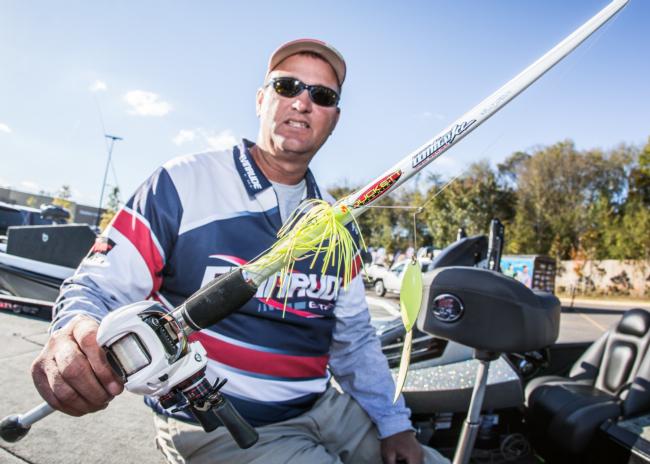 Gastonia, N.C., pro Chris Baumgardner is no stranger to fishing shallow cover. That’s why he stuck to his guns up the Elk River, targeting structure that created current breaks and provided ambush points for hungry bass. The bulk of his time was spent between the second and third bridge up the Elk, fishing a two-mile key stretch.

“Having the right bait was probably the biggest difference for me this week,” said Baumgardner. “I wanted a bigger profile, so I had a No. 6 willow leaf blade on my ¾-ounce War Eagle. I also threw chartreuse blades with a chartreuse skirt.”

Baumgardner’s spinnerbait allowed him to catch 10-1 and 18-5 on each of the first two days. Things got tougher for him Saturday and he only managed four bass worth 11-10. Yet it was still enough to nail down second place. 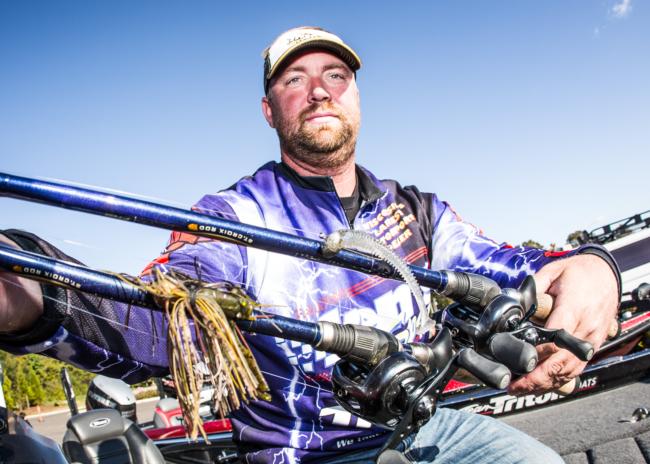 “I fished shallow wood the first two days, but the weather that came in Friday evening moved them out some,” said the Wisconsin angler. “So I wound up fishing breaklines or depressions out from the bank where there also was cover.

“I thought that maybe later in the day Sunday they would move back up some, but it never really happened for me,” continued Gallagher. “The sun came out bright and the fish stayed deeper. I had my limit by about 9 and then just had to grind it out.”

Gallagher settled on a Dirty Jigs pitching jig fished on 15-pound-test Seaguar InvizX. He concentrated on the main lake shoreline on either side of the mouth of Elk River, pitching or casting the jig to visible cover and under docks after the sun got high. 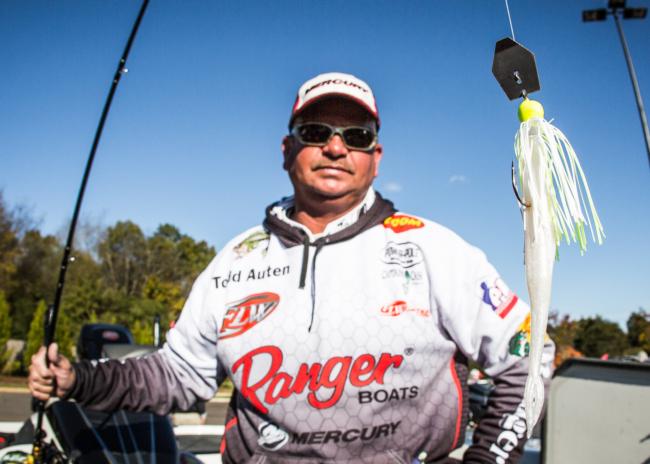 Junk fishing 101 was the motto for South Carolina’s Todd Auten in the championship. He kept several rods rigged with various baits on the deck of his Ranger and caught fish on all of them. For Auten, most of his action occurred in Elk River though he did catch some fish in the mid-lake part of Wheeler.

Like the majority of the top 10, Auten is at home throwing moving baits in skinny water. He caught fish from a few inches of water all the way out to 20 feet – though most of the fish were suspended over deeper water where there was an abundance of baitfish.

Auten threw a ½-ounce Phenix Jigs vibrating jig tipped with a white Zoom Super Fluke. His rod was a medium/heavy Daiwa rod with a Daiwa reel – both from the Tatula series – and he tossed his vibrating jig on 20-pound Bass Pro Shops monofilament. He also caught a few fish on a 3/8-ounce E.R Lures 3-Blade spinnerbait.

“A lot of what I did this week was just running around fishing visible cover, like docks or timber,” said Auten. “Most of the fish were suspended just off the bank around the shad. I just tried to keep my trolling motor in the water to keep my bait wet as long as possible.

“Another reason I think I did well was because I didn’t let the pressure of other anglers fishing close by bother me. There were a lot of people fishing through the water I wanted to fish so I would just pay attention to what they did and often times I could go behind them and catch a few.” 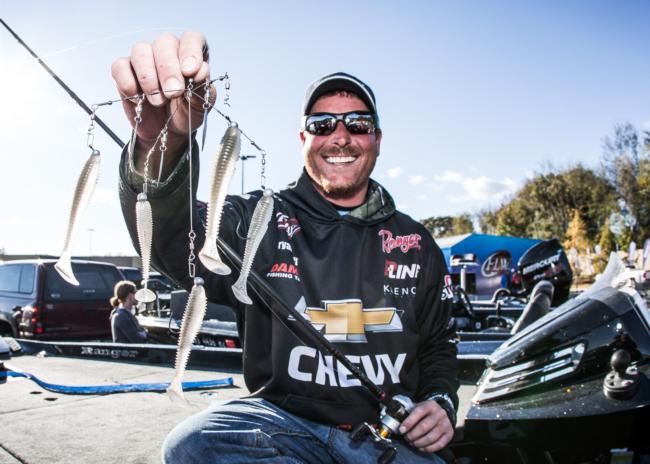 Thrift ran several spots during the tournament and never zeroed in on a sustainable pattern. Like many others, he ranged around the lower end of the 68,000-acre lake and targeted laydowns or bank cover as well as deep points where he felt the fish would replenish from day to day.

“I never did get on a dependable smallmouth bite,” says the Chevy pro. “I know there are lots of big smallmouths in this lake, but they were few and far between overall for me. The best I had going was to just keep rotating through every area where I had caught fish in practice or in the tournament. I didn’t cover a lot of new water.”

On Saturday, Thrift’s limit included four smallmouths and a single largemouth. He relied on an umbrella rig, a spinnerbait and a Damiki Rambler topwater lure.  He fished with a 7-foot Damiki heavy-action Dark Angel rod and either 20-pound-test P-Line fluorocarbon for the umbrella rig or 15-pound-test for the walking bait. 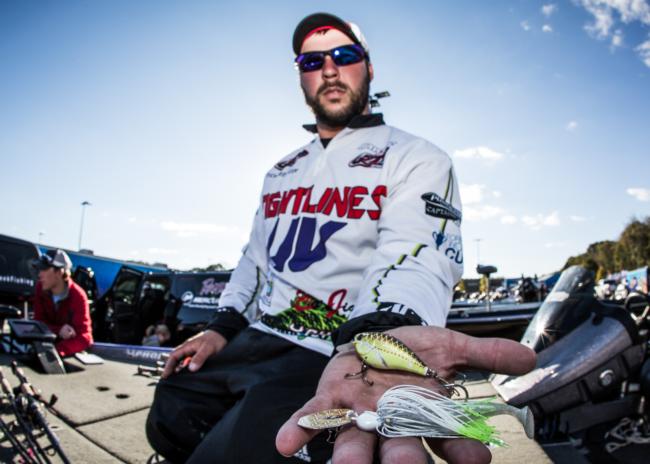 After catching two impressive stringers of 12-15 and 18-5 on days one and two, the Centre, Ala., angler seemed to have had his pattern dialed in going into the championship round. A cold front and heavy winds moved fish out of his best spot up Elk River, however, and Peek had to scramble at the end to catch four keepers that weighed 5-3.

Most of the fish he boated during the tournament came on a Bo’s Jig custom vibrating jig, a drop-shot rig combined with RoboWorms, a TightLines UV Whiskers Craw and a RC 1.5 square-bill crankbait.

“Those baits pretty much got all my fish for the week,” says Peek. “I was flipping and pitching to laydowns with the Whiskers Craw, going down rocky banks or casting to laydowns on the flats with the vibrating jig, and cranking riprap and other rocky stuff with the crankbait. When it got tough, I would back off into deeper water and fished the drop-shot. I caught a 3 ½-pound smallmouth and a 2 ½-pound largemouth at Second Creek Bridge the first day on the drop-shot, and that’s where I ended the tournament.”

Hindsight being 20-20, Peek thinks he should have bailed out of the Elk River earlier in the day Saturday. A brisk north wind raked the flats where his most productive laydowns were located, and Peek thinks it chased his fish away.

“The spot where I had caught the good stringers up the Elk River didn’t have enough water on it to hold fish Saturday,” said the Alabama pro. “The laydowns I was targeting there were more up on the flats and not against the channels, so the wind crashing over them pushed the bass out deeper. I never could relocate them, and I wish I had left there at 9 o’clock instead of waiting until noon. I might have put something else together if I hadn’t been so hardheaded.” 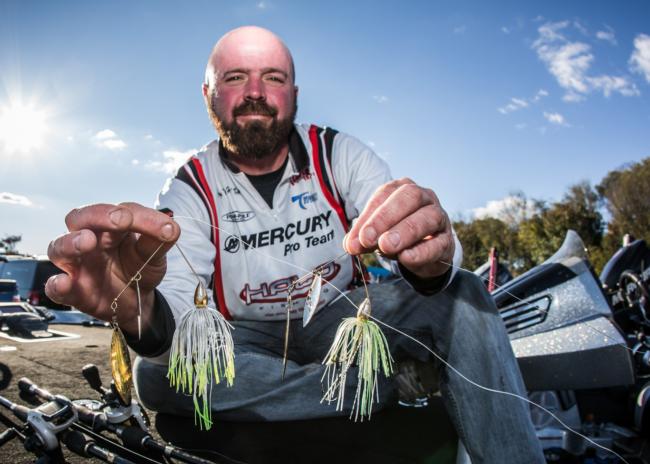 The Florida pro started strongly with an 18-pound, 2-ounce stringer – anchored by a 6-pound bass – that put him in the lead on day one. Most of his fish came out of Flint Creek where Kapiton was casting to laydowns with a ¾-ounce War Eagle spinnerbait in white/chartreuse.

On day three, Kapiton and his co-angler partner, Randy Gardner, made the 40-mile run to their destination only to find that anglers from a local tournament had already beat them there. Compounding the fishing pressure, the bass seemed to be turned off by the weather.

“They were just swiping at the spinnerbait and not really taking it,” recalled Kapiton. “I bet I saw 15 pounds of bass just hit at it and not take it. It was frustrating, but the fish were there and I had to go.” 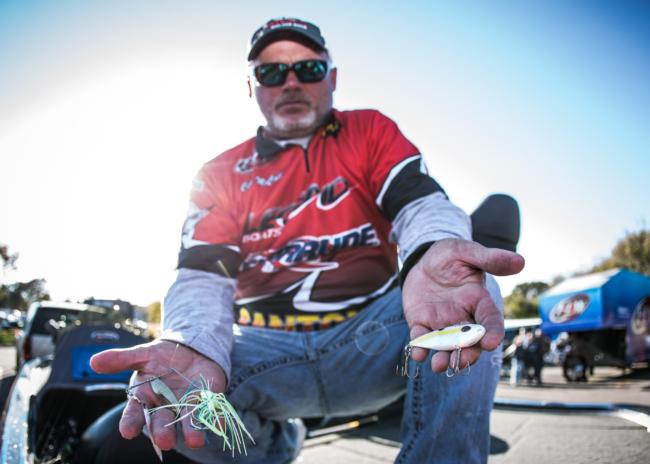 Part of the tournament’s successful junk-fishing brigade, McCall fished long stretches of bank in the main lake and various large creeks that had docks and rock bluffs.

“On Saturday morning I had a limit by 9,” noted McCall. “I just got into a little bunch of fish suspended around some barges. My last fish was a 5 ½-pounder that came out from under a dock. I must have caught 25 or 30 keepers in the tournament. My problem wasn’t catching fish,  just not catching the right ones.”

McCall’s lures of choice were a ½-ounce Santone spinnerbait and a Strike King Red Eye Shad. He targeted areas in the backs of creeks, or small coves, that held large concentrations of shad. He fished with 20-pound-test Seaguar fluorocarbon on a Lew’s rod and reel. 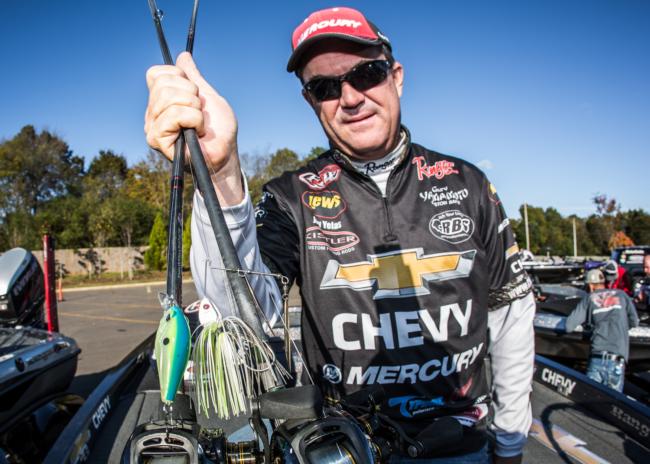 The Oregon pro was among the half-dozen or so contestants who concentrated their efforts in Elk River. Yelas also got on a laydown pattern and also got burned by it on the final day when he caught only two keepers for 6 pounds.

His bass came on a ½-ounce Punisher spinnerbait in white/chartreuse and a Yamamoto Chikara 200 crankbait. He was fishing with a Kistler Square-Bill rod and a Team Lew’s Pro baitcaster. 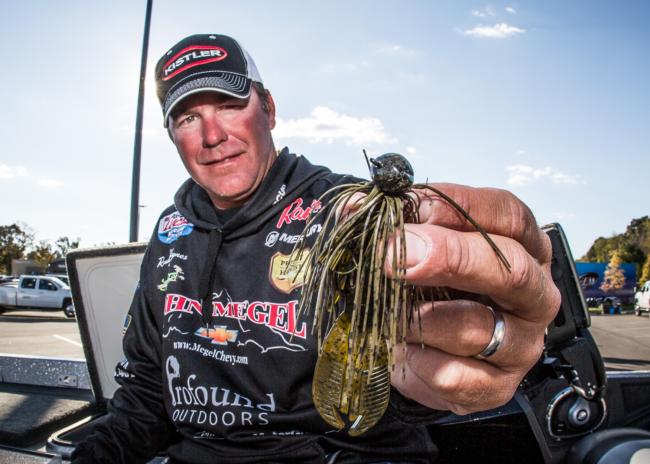 The Tennessee pro fished ledges up and down the main lake and had a 17-pound, 10-ounce limit to show for it in the opening round ­– good for second place. As the wind built and the weather started changing on Friday, however, Haynes was unable to switch gears. In the championship round, he could manage only one keeper for 1-3.

For the most part, his fish came on a 1-ounce Swamper jig (green pumpkin) that Haynes fished on a Kistler Helium 3 7-foot, 6-inch rod and Lew’s Tournament Pro reel.

“I fished ledges and breaks in the Decatur Flats area and felt pretty good about my chances until the wind got up,” recalled Haynes, who was in sixth place after day two. “There were some 6-foot waves Saturday out where I was fishing and I just couldn’t fish my spots the way I needed to. It was a very frustrating way to finish, but that’s tournament fishing.”