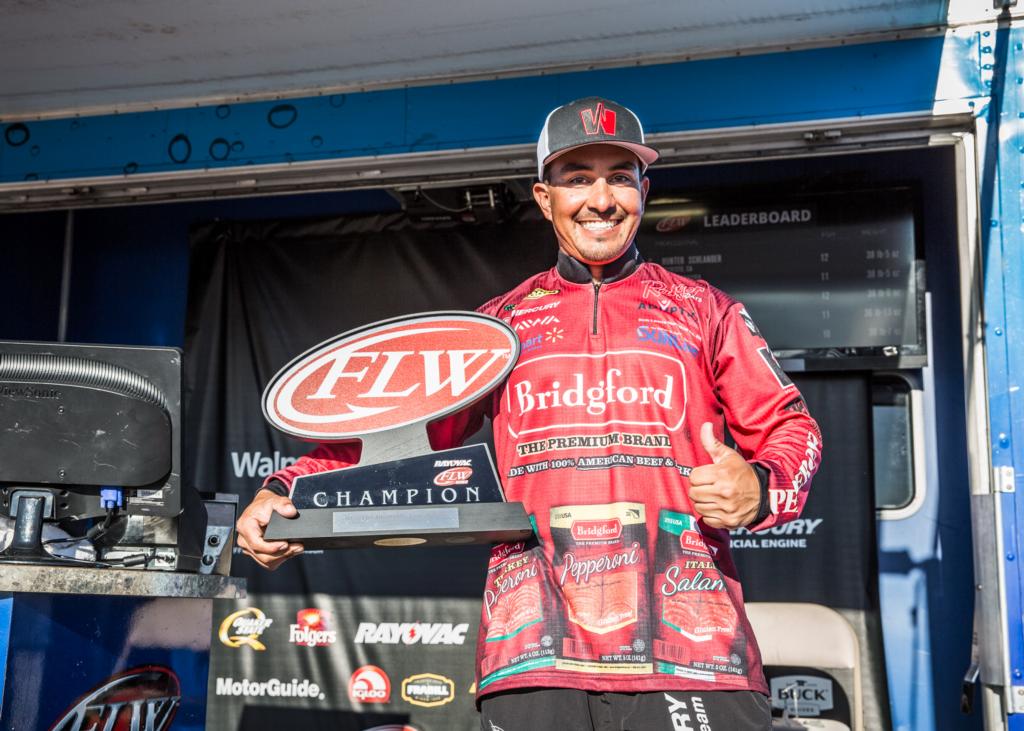 Lake Havasu City, Ariz. – Emotions were high for Joe Uribe Jr. as he took the stage for the final weigh-in on Lake Havasu in the Rayovac FLW Series Western Division event presented by Mercury. With a 5-pound, 4-ounce lead coming into today, Uribe felt like this was his tournament to win, and he didn't disappoint. In fact, the Suprise, Ariz., pro locked up his first Rayovac FLW Series title with an exclamation point – a 26-pound, 7-ounce limit that caused the crowd to jump to its feet with applause when Tournament Director Ron Lappin called the final weight. Uribe won in a landslide by almost 15 pounds with a three-day total of 67-3. He walked away with a $40,000 paycheck.

“Today was awesome, just awesome,” says Uribe. “My very first fish of the morning was a 9-pounder. I was shaking, and you can’t ask for anything better to start. Then I bet my co-angler and I caught 30 fish today. We wore them out. There were more fish moving up, and there was some wind, so we caught them all day. It was just my time. I can’t even explain it.” 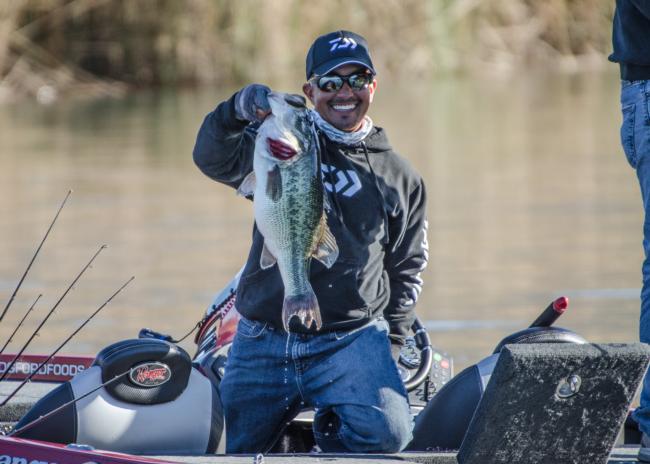 Uribe’s plan was solid from the beginning. He knew that prespawn largemouth were the ticket to win on Havasu this week. His plan was to seek out spawning pockets with ample amounts of habitat – a combo of brush and wooden structure placed in the lake for the fish to hide in – where the big females could stage. He located some prime areas but never fully limited himself during the tournament.

“On the first day of the event I noticed a lot of guys ran south a ways, so it left some places closer to the ramp open,” recalls Uribe. “I saw some birds chasing shad in an area, so I stopped and caught some stripers. I kept fishing it and caught some decent largemouth, so I kept running other coves nearby that I knew of and had them all to myself. I just stuck with that, and they kept reloading every day.”

While his bite lasted all day today, Uribe capitalized early during the first two days when his bite window lasted only until 10 o’clock. He worked shade lines in the pockets, and when gizzard shad were present he could quickly load the boat with 4-pound-class fish.

One key for Uribe was bumping his bait off of the habitat to trigger a strike. He threw a homemade jig with a Reaction Innovations Skinny Dipper swimbait trailer. A Z-Man Original ChatterBait tipped with the same Skinny Dipper (he dyed the tail chartreuse) also produced for him, along with a Basstronix A-rig – also paired with Skinny Dippers. His rod was a composite 8-foot Performance Tackle Rod, and he used 20-pound-test Sunline fluorocarbon.

“To win in front of my friends and family makes it that much sweeter,” said an emotional Uribe at the final weigh-in. “I can’t thank enough all my sponsors and all of the people that have supported me. I told myself that when I finally won, I was going to win big, and I feel so blessed right now.” 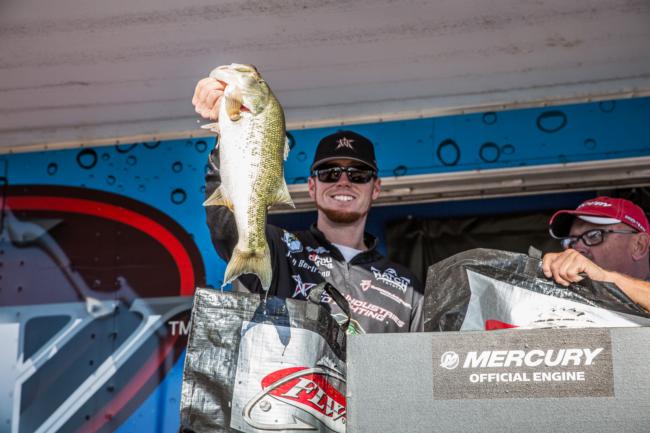 After losing the lead on day two, Josh Bertrand of Gilbert, Ariz., didn’t have enough to keep up with the unstoppable Uribe on the final day. Still, he posted a solid performance with a 16-pound, 13-ounce final limit to boost his total weight to 52-5.

“I found a special area with a pretty good population of female smallmouth,” says Bertrand, who earned $15,500 for his runner-up finish. “They were staging outside of spawning coves, and the water was a little cooler, which is why I think they were still on those outside points. The bite usually picked up for me later in the day when the sun came out.”

Bertrand was one of the few anglers to show out this week while relying on smallmouth for the bulk of his bag, although he did take advantage of the early largemouth bite for the first hour or so each day until the sun climbed over the mountains.

The Havasu Palms area is were Bertrand spent most of his time chasing smallmouth. His main bait was a Berkley Havoc Beat Shad swimbait rigged on a 1/4-ounce ball-head jig. A 7-foot medium-action Abu Garcia Veracity rod matched with an Abu Garcia Revo SX reel and spooled with Berkley Nanofil and a 6-pound-test Trilene 100% Fluorocarbon leader was his setup. 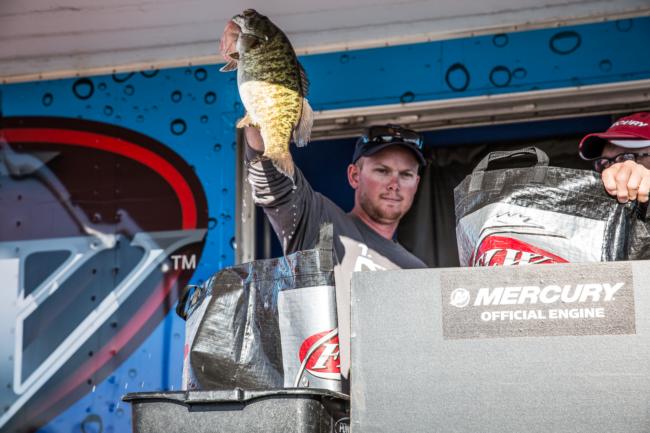 Scott Hellesen of Whittier, Calif., quietly climbed the ranks this week to net his first Rayovac FLW Series top-10 finish. Days one and two (16-8 and 17-6) were strong for the young pro. While he only managed four fish in the final round, the quality bites were still there. He weighed in 14 pounds, 5 ounces for a three-day total of 48-3 and a third-place finish. Hellesen carried a $12,000 check with him back to California.

“I was targeting spawning coves for largemouth like a lot of the guys,” says Hellesen. “I was fishing the cages [fish cribs] that the bass were moving into before they spawn. I had several areas that I just kept running through, and when new fish would pull in they would crush my rig.”

Hellesen was throwing a homemade umbrella rig. He had a model with two hooks (for fishing in Arizona waters) and one with three (for California waters) that he stuck with the entire event. If a fish would follow the rig but not commit he’d toss a Yamamoto Senko at it and likely convert.

Hellesen focused on an area near an island just south of the launch site at Lake Havasu State Park. 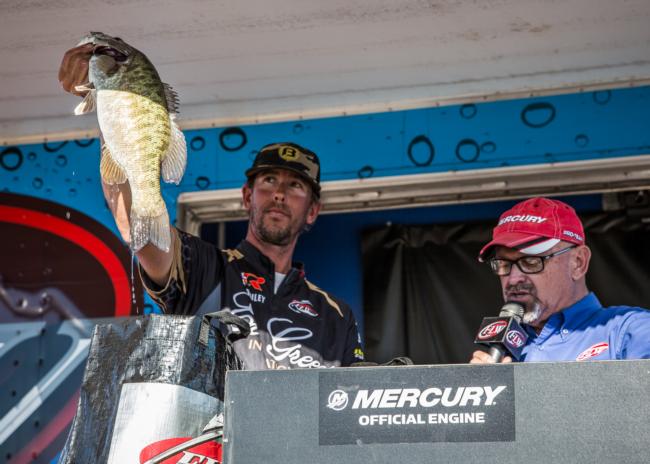 One of the few hometown pros to make it to the final day was fourth-place finisher Shaun Bailey, who utilized his wealth of knowledge to rack up 45 pounds, 6 ounces worth of bass from Lake Havasu en route to a $10,000 payday.

Bailey started his day within sight of the ramp, working structure to get on schools of fish and try to load the boat quickly. From there, he’d run halfway between takeoff and the dam and switch to rocky humps, bluffs and points for smallmouth. Almost 75 percent of the fish he brought to the stage this week were “small jaws.”

Bailey threw a selection of baits, including an umbrella rig called the Bailey Rig, which features five wires and five blades, and Keitech and Predator swimbaits. Bailey also tossed a variety of Evergreen baits, the C-4 jig, Buzzer Beater lipless crankbait and D Zone spinnerbait among them. 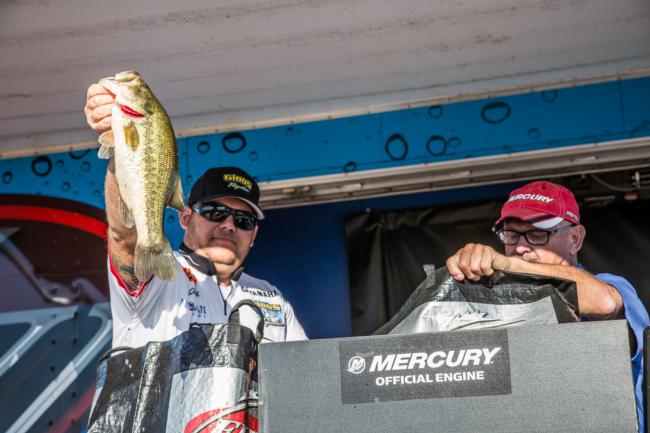 JJ Gibbs was one of the only anglers to flip his way into the top 10. The Lake Havasu City, Ariz., resident worked backwaters of the river and main-lake tule patches to haul in a three-day total weight of 42 pounds, 8 ounces.

Gibbs fished the event out of a small aluminum boat that allowed him access to those hard-to-reach areas in the tules. His primary weapon was a Gibbs Jig – made by his father – in brown/green pumpkin with a matching Zoom Speed Craw. On the outer edges of the cover he opted for a Z-Man Original ChatterBait in the pearl olive color.

“I had a fun week,” says Gibbs. “I flipped pretty much the whole time in the lower river and around the main lake. The fish have been moving up since Tuesday, and my bite got better each day. I wish I had more time today because it was starting to get really good as I left.”