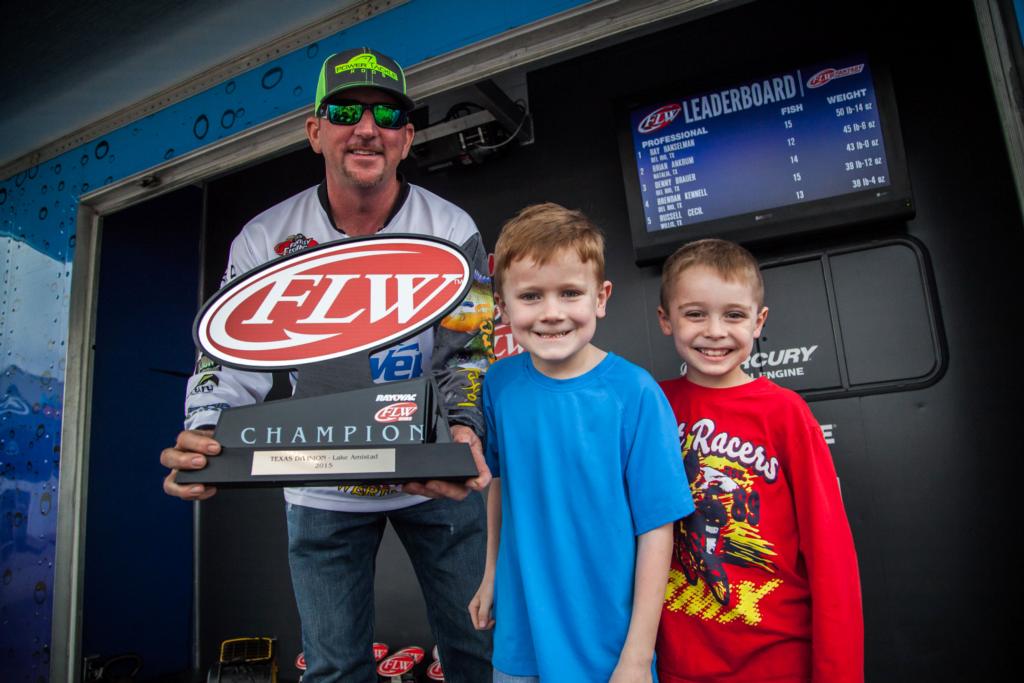 He told the weigh-in crowd that he was tired of being a bridesmaid. He’d had enough of finishing runner-up. He was ready for his time in the limelight and wanted it to happen on this stage, in Del Rio, Texas, in front of family and friends in the town where he grew up.

Finally, it happened. At the day-three weigh-in for the Rayovac FLW Series Texas Division Lake Amistad event presented by Frabill, Ray Hanselman was crowned a champion.

All that an emotional Hanselman could get out as he tried to hide his sobs was a one-line thank you when Tournament Director Ron Lappin handed him his trophy: “I want to thank everybody who’s out here today.”

With that, Hanselman pulled his hat down over his eyes and the hometown crowd exploded with applause.

Hanselman took the lead in this derby on the second day with the tournament’s second-biggest stringer – 19 pounds, 6 ounces – by running almost 65 miles up the Rio Grande to a couple of warm-water springs in the back of a spawning pocket. Getting there was a gamble – Hanselman burned more than 40 gallons of gas a day and gave up crucial hours of fishing – but one that he was willing to make again today, and it paid off with a final stringer of 15-4.

Hanselman was easily the most consistent pro in the field this week due to his vast local knowledge of Lake Amistad and his willingness to go where he knew the big ones lived.

“I caught two big ones in that spot yesterday and one today,” Hanselman says about the springs. “There weren’t many [kicker bass]. I didn’t know if it was worth the run.”

Located in the back of a canyon, the springs warmed the water in this area up into the low to mid-60s, while most other parts of the lake hadn’t hit 60 degrees. To get there, Hanselman had to “jump rapids” and snake through some narrow waters.

The springs are just visible due to a slight surface disturbance where they bubble up from the rocks. Hanselman cast a Top Shelf swimbait to big boulders and trees in 2 to 10 feet of water near the springs.

While the spot far up the Rio Grande was Hanselman’s big-fish hole, he actually caught more keepers fishing farther down the lake in a series of grass-lined ditches and drains where bass were staging alongside spawning flats.

Hanselman caught more keepers on a Wahoo Lures Wing Ding Tail Spinner than any other in his boat – and he used almost 20 rods this week. The Wing Ding has a compact minnow-shaped body with a tail-mounted Colorado blade and a single treble hook. Hanselman cast it out and hopped it back to the boat, ripping it out of the grass any time it snagged.

“It’s great when it’s cold,” he says. “It’s a small bait and a dang good reaction bait. We don’t get to throw it much when the lake’s at normal pool because there’s too much brush in the water. But at low pool it gets those ‘dead fish’ fired up, and then I can throw a crankbait out there and catch them.”

Hanselman’s best crankbait was a Bill Norman DD22 in a color that he says resembles a baby carp. Other productive baits were a drop-shot and umbrella rig.

Today, his bite slowed on the drains, but Hanselman stuck it out and caught a late-day 3-pounder that sealed up the win.

“I could see them in the grass [on my depth finder],” Hanselman adds. “They weren’t eating. The water is still ‘cold to the core.’ The unit was showing 58 degrees on the surface, but I think the water at the bottom is still too cold.”

Cold or not, Hanselman finally has his big win – his first with FLW.

Click here for video of Hanselman explaining some aspects of his tournament. 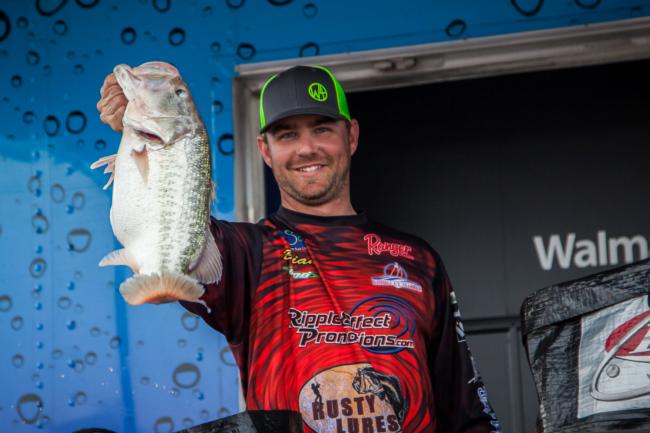 All week long it seemed like Natalia, Texas, pro Brian Ankrum was heating up. He caught 14 pounds, 6 ounces on day one, then brought in 19-6 on day two to establish the tournament’s heaviest limit.

Both of those days, Ankrum had just one keeper by 10 o’clock but was able to fill out his limit within the next two hours.

Today, it was the same story: One keeper at 10. That keeper was an acrobatic hawg that made for some epic on-the-water photography and hinted at a come-from-behind victory.

Alas, his midday fish just never showed up. Ankrum blasted one more giant, even bigger than the first, but couldn’t catch another keeper. His two-bass total today was 11 pounds, 3 ounces, and he came up 5 1/2 pounds shy of Hanselman’s mark.

“I lost one with about a minute left today fishing right across from the launch,” Ankrum says. “Along with those two big ones, that’s really about the only bites I got.”

Ankrum caught all his fish from four spots, with just a couple of them giving up all of his kickers. He targeted steep rock drop-offs in 18 to 36 feet near the main lake where bass were sliding up from the depths to stage before heading for spawning grounds.

His very best spot was located where a ditch mouth intersected a larger creek channel, with a sheer drop on one side and a more gradual 45-degree slope on the other.

All of his fish came on a drop-shot rig comprised of a 3/8-ounce weight, a No. 2 Gamakatsu drop-shot hook, a nose-hooked Zoom Finesse Worm, an 8-pound-test Seaguar fluorocarbon leader and 20-pound-test PowerPro Super Slick 8 braided main line. Ankrum fished his rig on an iRod “power finesse” spinning rod. 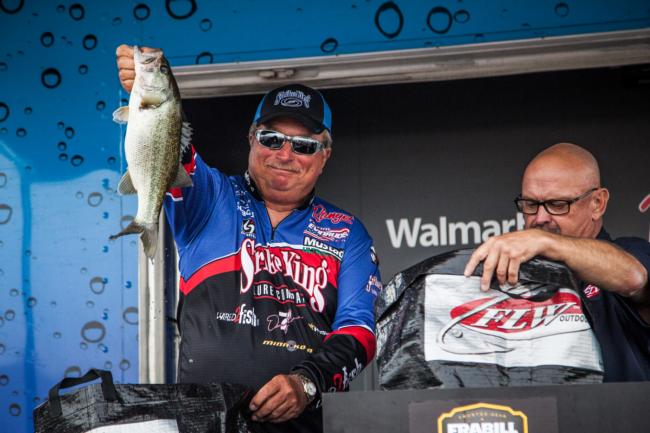 Day-one leader Denny Brauer, the Missourian who moved to Del Rio a few years ago, unfortunately trended the wrong way this week. His weights slipped from 17 pounds, 1 ounce on day one to 14-12 yesterday and 11-3 today. He was never able to reconnect with the big fish that boosted his limit on the first day.

All week Brauer targeted main-lake breaks located “next to the ocean” where prespawn bass were just starting to move up. He tossed a 3/4-ounce Strike King Denny Brauer Structure Jig with a Rage Chunk trailer and a Carolina-rigged Strike King lizard.

“My deepest fish came from a little more than 30 feet,” Brauer says. “It seemed like a lot of the good ones were around that depth. My spots were steep – practically cliffs.

“I think the bite just got a little funky,” he adds. “There are a ton of them out there. They’ve just not moved up. Today they backed off and suspended. It’s scary what’s out there. If they ever move up, it’s going to open a lot of eyes. All these fish are really healthy.” 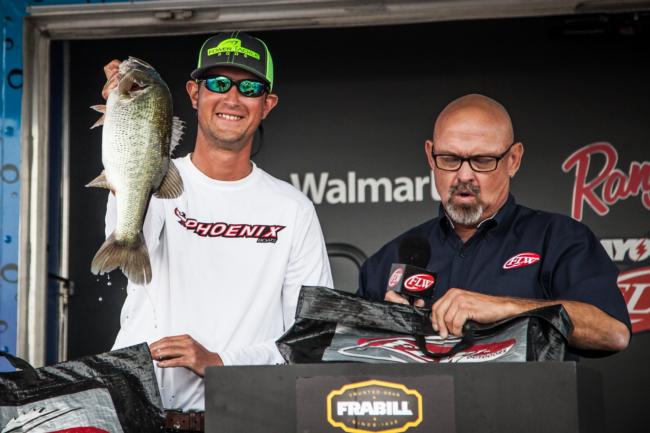 “I know a lot of guys went shallow, but I love to live in that ‘ocean,’” he says. “You never know what’s going to happen [when you’re offshore]. Any bite could be a giant.”

His best spots were intersections between the main river channel and creek mouths. They were the first spots where deep bass set up after leaving their winter haunts. Most of his fish were suspended up 20 or 30 feet in about 50 feet of water. 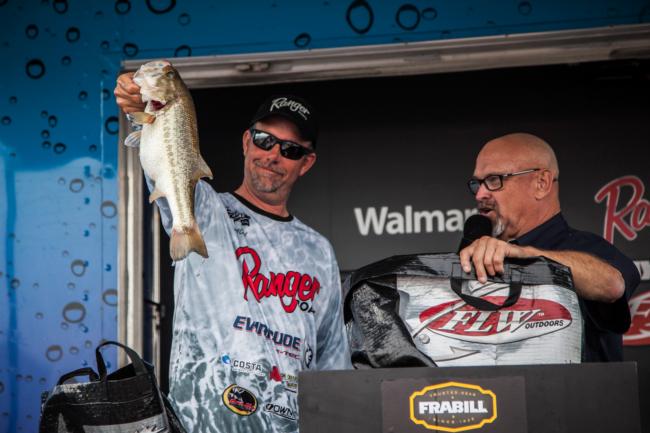 After a slow start on day one where he brought in only 9 pounds, 1 ounce, Russell Cecil of Willis, Texas, dialed in and fished his way to a top-five finish with daily limits of 16-6 and 12-13.

“My fish were on points,” Cecil says. “I caught them as deep as I have ever caught them here. Some were 70 feet deep. They were definitely staging fish getting ready to spawn.”

Cecil had to back off because most of the 15- to 20-foot-deep cover that he would normally fish during Amistad’s prespawn season is high and dry due to the low water level. He instead targeted rock with a mix of grass (he wasn’t sure of the type) and deep hydrilla. Cecil gradually whittled down his 30 or so spots to just seven that he fished today.