Prespawn bass are on the move in Lake Guntersville, which means a number of patterns will be in play for anglers 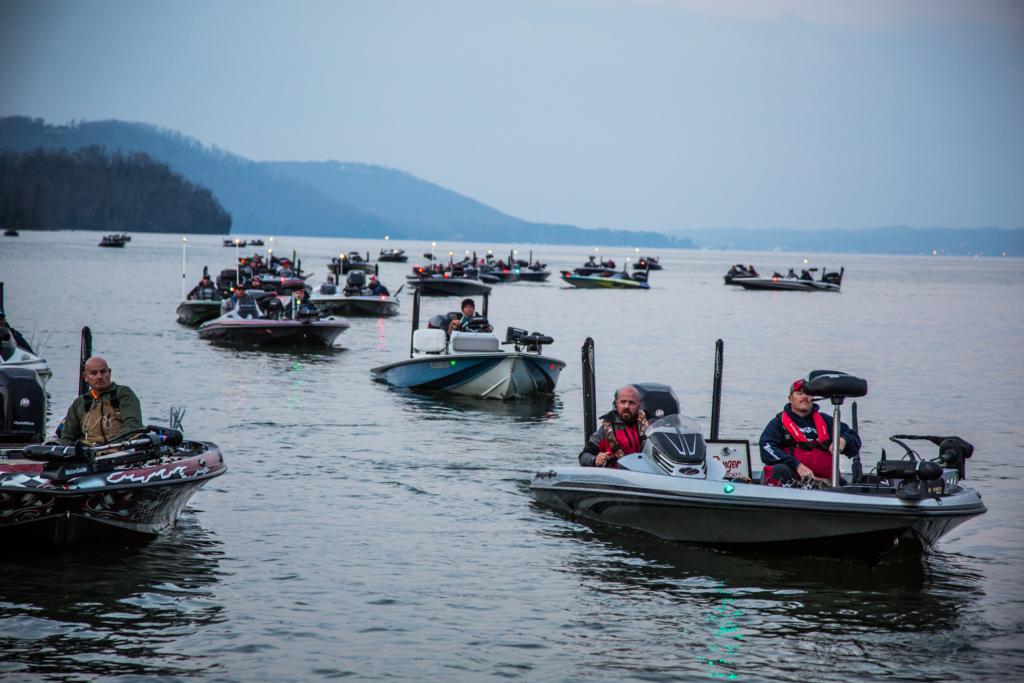 Lake Guntersville will always have a place in bass-fishing history – most recently because of Paul Elias and the umbrella rig ­– but it represents so much more. With boat ramps seemingly on every street corner, and a town and community that caters to anglers like no other, the legendary lake is always a popular stop. Given all that, this Rayovac FLW Series event, presented by Mercury and hosted by the Marshall County Convention and Visitors Bureau, might provide a different sort of test than Guntersville typically dishes out.

Keeping up with the competition as big bag after big bag crosses the stage is a common theme on Guntersville. A week ago, everyone was ready to predict another slugfest. Now, with expectations tempered by long days of practice, the sense is that for many, just finding fish will be the challenge.

The whole Tennessee River has been hit hard by winter and much of the water entering Guntersville from upriver is cooler than usual. To make things more interesting, the last few days have featured weather that is absolutely pristine, resulting in air temperatures reaching into the upper 60s and low 70s and water temperatures soaring in the backs of creeks and other places untouched by the cold main-river current. Cold water, warmer water and in between – the  ordeal has put the fish in a prespawn funk that has stymied local sticks and past winners such as Alex Davis and Jonathan Henry. On the other hand, it’s created opportunity for some out-of-towners.

“A lot of guys I’ve talked to say it’s been terrible, but I’m running one specific pattern and I’m getting bit doing it,” says FLW Tour pro Matt Stefan, who is targeting fish staging to spawn. “I wish I was getting multiple bites in one spot, but I’m not, so I’ll definitely be running and gunning. I don’t like to be overly optimistic beforehand, but I feel okay.”

The Wisconsin pro wasn’t in any hurry to spill the specifics, but he touched on a number of key issues this week: The grass, the bridges and the weather’s effect on the fish.

“The grass situation is really odd,” says Stefan. “I’ve had a hard time finding green milfoil or hydrilla. I can definitely find plenty of eelgrass though. I haven’t been here in three or four years, and there wasn’t any eelgrass when I was here last. Depending on how the wind is blowing, you almost can’t even fish because there is so much chopped-up eelgrass floating on the surface.”

Having only recently moved to Alabama, Mark Daniels Jr. has little experience on Guntersville, but he has already identified the grass as a key player.

“It’s imperative to have grass down there,” says Daniels.  “I’ve found a mixture of milfoil, weathered (not dead) hydrilla, and eelgrass. Any one is good, but when you find an area with all three in combination that is the deal.”

Though he knows what he wants, Daniels hasn’t had any more luck than the rest of the field in finding the juice.

“I’ve only found a couple spots that have that right concentration of grass,” he says. “I mean, I fished for four days, but I’ve only found a handful of areas that have the good healthy grass that those big prespawn females can hang on. When you can find that grass that is growing about 8 inches to a foot off the bottom, that’s where you need to be.”

The lack of really prime Guntersville grass will likely concentrate anglers in productive areas, but it has led Stefan to eschew it altogether.

“I haven’t found any good grass where I feel like the fish are loaded up in it, so I’m kinda trying to stay away from that,” Stefan confesses.

With 230 pros signed up to fish, an already busy Guntersville will be getting a bit more pressure from a fairly sophisticated crowd of anglers this week. One part of the lake that will get hit particularly hard is the bridges.

“I think the winner will catch them off bridges,” says Stefan. “But I don’t know how guys do it. I’ve pulled up on a couple bridges where you’ll have 10 people fishing. I saw some guys trying to make specific casts and they are getting caught in two different lines on one cast. There will be some big weights caught off bridges, but I think 50 guys will count on them and only five will catch them. I think it’s a big gamble.”

“The bridges are hard to beat; it’s hard to catch 35 pounds anywhere but from around a bridge. Almost every tournament in the last three or four years has been won on a bridge. Still, I don’t fish the bridges. I just don’t like fishing in that big of a crowd.”

Despite the crowd, Guntersville’s bridges are special, and they produce perennially.

“The bridges we have here are causeways,” Martin says. “That means there is only a small opening for the fish to go through them to spawn in the creeks or go back out to the lake. Also, there is nearly always bait on the bridges. There are very few times when the bridges aren’t good. If you’re coming to Guntersville and you don’t know how to catch them any other way, go hit a bridge.”

Stefan said that the typical fish one would catch off a bridge might weigh a pound more than a fish the same length caught elsewhere in the lake simply because of how thick the bait is near the structures. That fact can go a long way toward pushing anglers to make the commitment necessary to tap a bridge ­– crowd notwithstanding.

Up-and-down weather has put some of the fish in a rut, but it has also moved them a lot closer to their spawning grounds. The next several days are forecast to be relatively stable, with high temperatures in the 60s with some rain showers. That weather could prove to be a boon to anglers who want the fish to stop moving so much.

Barry Wilson was one of the few pros who said they had a good practice, and he couldn’t be happier about the forecast.

“They are all prespawn now, and when you find them, you really find them,” says Wilson, a native of Birmingham, Ala. “The cooler weather we’re supposed to have the next couple of days should make the fish stay where they are. I think if guys can find them during tournament hours they will do well.”

If the fish really do stay put, Wilson could be in for a very good tournament if his practice hold true. The same might be said of Stefan.

“I’m definitely catching what I would consider staging fish,” says Stefan. “They are not in the backs or close to spawning; most of my fish are coming midway back and out toward the river channel.

“I’ve been fishing for the weather, so I think my stuff is going to hold up,” Stefan adds. “But, if we get a bunch of rain and the high is still 60, that is still warmer than the main channel. I feel like my fish are going to be less affected by it, and even if they do start moving in the backs a lot, more fish might just move to my stuff.”

Some big weights are on the way and will show up this afternoon on the weigh-in stand. With the fish moving from their winter areas toward the spawning grounds, the potential to intercept a 30-pound sack is as high at Guntersville now as anywhere in the country. Someone will catch five big prespawn females today, be it on a Rat-L-Trap or an umbrella rig.

The bigger question is, can that person do it three days in a row?

See all photos from Day 1 takeoff.