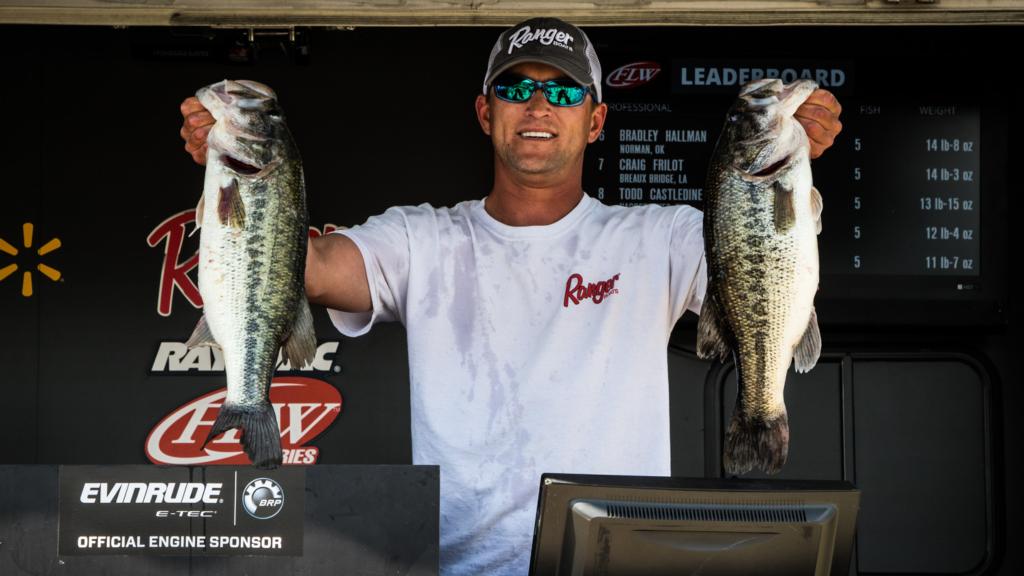 With the warming conditions in the area, many of Texoma’s largemouths are on the beds or heading for them. Like many of his competitors, Setina engaged in the sight-fishing game, but he also caught fish by working likely areas where he could not see the fish.”

“I found some areas with fish on beds, and in some areas I’m just pitching bushes,” he says.

“I just gave them a little one-two combination,” Setina says. “I used the sungill color for both baits. The fish seem to like that color.”

Running about 15 minutes from the takeoff site at Highport Marina, Setina targeted random pockets with lots of brush. He hit what Setina termed “standard-issue stuff for springtime.

“I didn’t want the super-clear water,” Setina adds. “The water I’m fishing in is cleaner, but it’s not the gin-clear stuff. There are some places out here where you can see 6 to 8 feet. I like a little stain to the water.”

Setina got a limit early and made his last cull at around 10:30. His tournament preparation was predicated on timeliness and current conditions. The rainy weather that pushed through the area last weekend starkly contrasted the bright, sunny conditions anglers fished today.

“I fished a tournament down here Saturday, and it was horrible,” he says. “I loaded up early, went to the house and came back Monday and just practiced Tuesday because I wanted to practice in the same conditions we’d have in this tournament.”

Essentially, recent rains raised the lake about 2 feet above normal pool. Naturally, the runoff from the downpours pulled loads of sediment into the lake and muddied the creeks and spawning pockets.

Fortunately, Texoma has been on the fast track to clarity this week.

“It has cleared up a lot since last weekend. I mean, it's a night-and-day difference,” Setina says. “I’ve never seen a lake clear up as fast as it has from as muddy as it was on Saturday.

“Literally, it’s like flipping a switch. It really settled down quickly.”

The only angler to break the 20-pound mark, Setina implemented a fish-management strategy today. He’s confident that his area can produce another big sack on day two.

“I have some more big ones out there,” he adds. “They just weren’t quite ready today. I had one little rat in my bag today, and I could’ve culled it with a 4-pounder, but I thought I’d save those for tomorrow.

“I shouldn’t have any trouble catching 20 again tomorrow. Hopefully, I’ll be done by 10 or 11, and I’ll just go look for some more.” 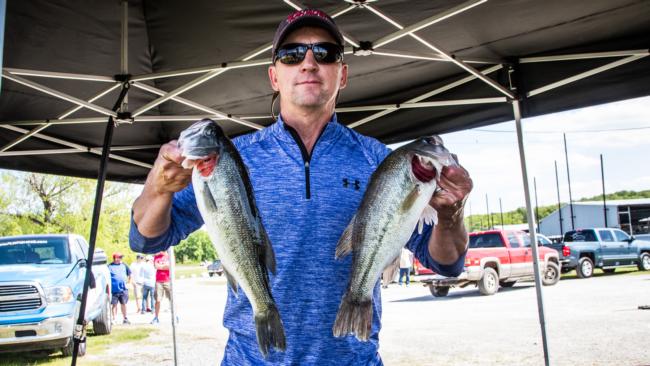 Ryan Lejeune, of Eunice, La., leads the co-angler division with 12 pounds, 4 ounces. The only co-angler to break the 10-pound mark, Lejeune carries a lead of 3-11 into day two.

Paired with fifth-place pro Brian Ankrum, Lejeune benefited from his pro’s plan to fish scattered brush, rather than sight-fish. He caught his fish by pitching Texas-rigged plastics.

Lejeune had six bites today and boated five of them. He credits his Ankrum for locating a spot with lots of targets.

“It’s all about being on the fish," he says. "I mean, everybody here knows how to fish, but if the fish aren’t there, it’s hard to catch them.”