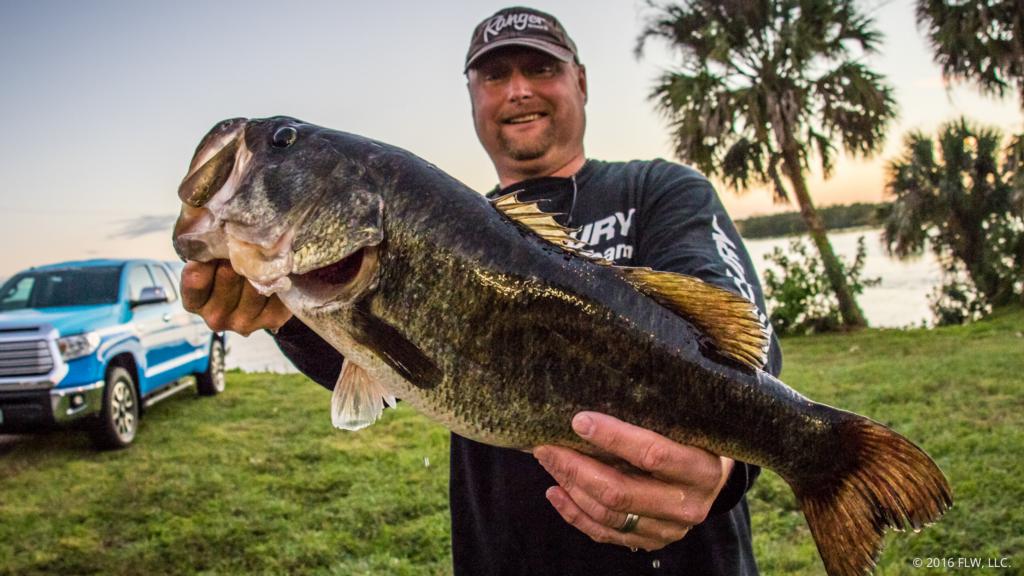 While Lake Okeechobee may lack offshore structure that Jason Lambert is used to, that hasn’t stopped him from catching good limits of Florida bass this week. By the time the scale closed on day two of the Costa FLW Series Southeastern Division event – which is presented by Power-Pole – the Pickwick Dam, Tenn., pro quietly overtook the top spot thanks to a day-two bag of 15 pounds, 7 ounces.

Combined with his day-one catch of 16-9, Lambert now has an overall weight of 32 pounds even. That means he will carry a slim 1-1 lead over Florida stud Glenn Browne into the final act of the Costa Series season opener.

If you know anything about Lambert’s career, you know that summertime on the Tennessee River is his element. What you may not know is just how much he loves to fish grass, which he is out to prove this week.

“People think that all I do is fish offshore,” says Lambert, who will be entering his third season on the Walmart FLW Tour. “But really I love fishing grass. I’ve had a good practice and a lot of fun this week. It feels good to be fishing down in Florida.”

Boating 2-pounders hasn’t been much of an issue this week for the pros, while the biggest struggle has been finding consistency in average-sized bites – say 3- to 5-pounders. That is not the case for Lambert, however.

“I’m just fishing a large area with four or five different places within it,” Lambert explains. “I’ve been casting three different baits the whole time. A lot of my fish are coming to me which makes me feel really good about tomorrow.”

Nearly every day of this tournament has been a new challenge for the field. From cold and clouds on day one to torrential rain and wind today. For the top 10, a break seems to be on the horizon. Conditions may finally align on the final day to help encourage big females to push shallow and potentially turn the bite on thanks to some sun and warmer temperatures.

“What I’m doing is more of a pattern than anything,” says the 2013 Walmart FLW Tour Rookie of the Year. “I feel like because fish are pushing up if the weather does what [the weatherman] says, the fish should chew tomorrow.

“I had a pretty rough year on Tour last season, so if I could win this thing that’d be one heck of a way to kick the year off. I’m fired up.” 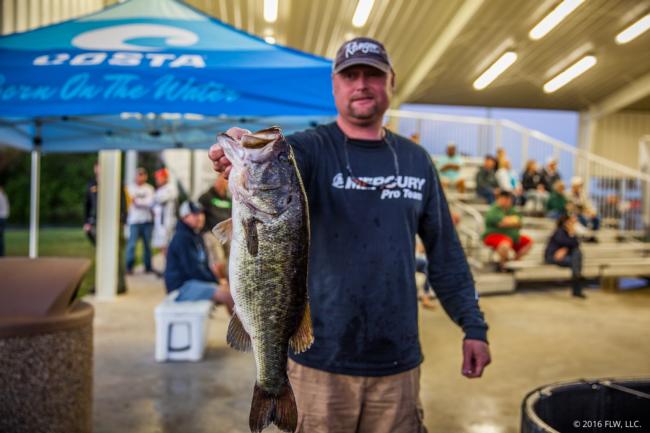 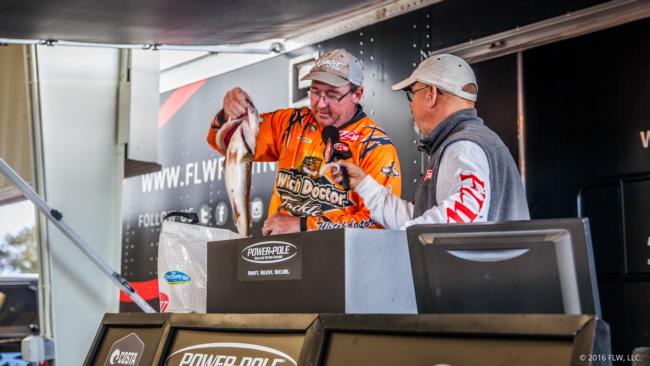 Adam Trieschmann of Wellington, Fla., overtook the day two lead on the co-angler side with a cumulative weight of 24 pounds, 4 ounces. After only catching four fish for 5-11 on day one, Trieschmann surged into the lead with an 18-9 bag today.

Pitching and casting into Lake Okeechobee’s heavy vegetation helped produce Trieschmann’s fish on day one. Today’s torrential downpours did not have him changing up strategies. Instead, it helped him fine-tune his approach.

“All I could do was watch my line. Half of the bites you saw it swimming away,” says Trieschmann.

Being that Trieschmann hails from Florida, he has a vast knowledge of the Big O. As the owner of Witch Doctor Tackle, he tests his line of rods on the lake nearly twice a week. He also fished last weekend’s BFL as a co-angler and finished in 12th place. His boater was the winner, George Kapiton.

Though he has spent countless hours on this pond, Trieschman and his pro (Ron Young) fished a spot today previously unknown to either angler.

“I’ve fished this lake for years and have never been to that spot before. We went in blind and managed to pick it apart.”

Trieschmann has a slim 15-ounce lead over his pursuer Mark Howard. He hopes to carry his momentum into the final day as well as to the Walmart FLW Tour when it stops back on Okeechobee in February.