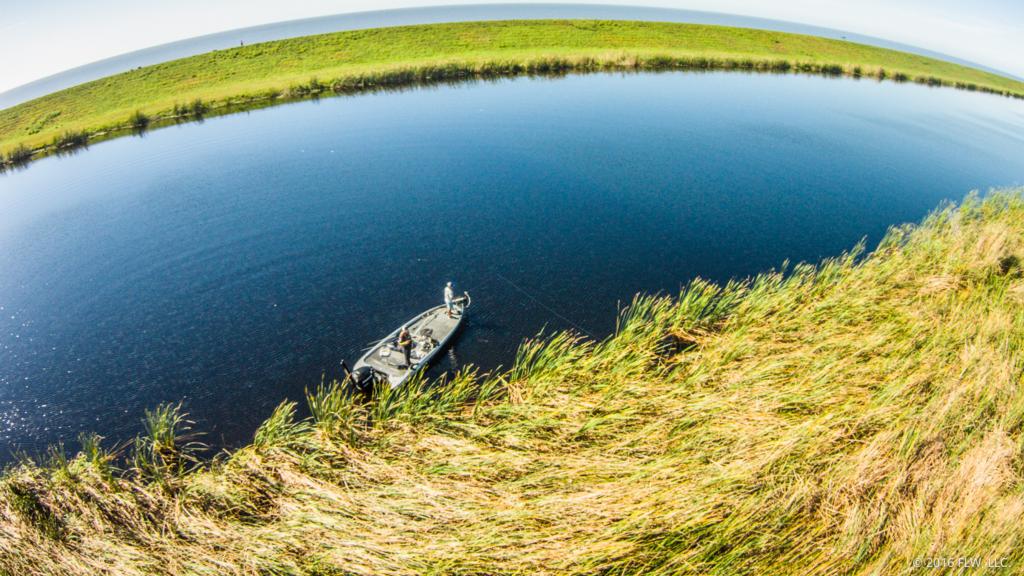 Last weekend Jason Lambert proved that he not only can catch fish on the Tennessee River ledges, but also in the vast, shallow expanse that is Lake Okeechobee. Lambert bested the 250-boat field in the Costa FLW Series opener on Okeechobee, which was presented by Power-Pole and hosted by Okeechobee County Tourism, by targeting staging fish in outside grass lines in spawning areas.

Though Lambert was able to chuck and wind his way to victory, many in the top 10 stuck with the traditional way of catching Florida bass during a cold front – flipping. Chilly and stormy weather kept the fish in a funk, yet the talented group of anglers was still able to piece together a strong tournament.

Here are the details on how the rest of the top 10 tackled a tough Okeechobee. 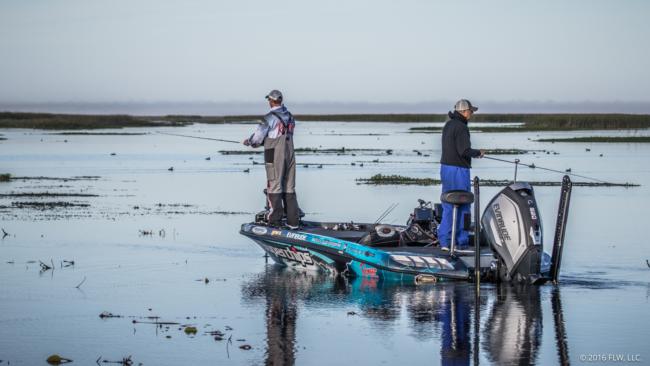 After a phenomenal season last year that included a victory at the Northern Division event on Lake Champlain, Glenn Browne of Ocala, Fla., is back right where he left off in the top 10. He hung tight throughout the tournament by posting consistent weights of 16-04 and 14-11, but his final-day bag of 12-05 left him just a little short. With 43-04 overall, Browne finished in second.

Browne – who is known as one the best flippers in the industry – stuck with his guns and kept a big rod in his hands each day of competition.

A milk run of several stretches of mats around the King’s Bar and north shore areas produced quality bites for Browne. 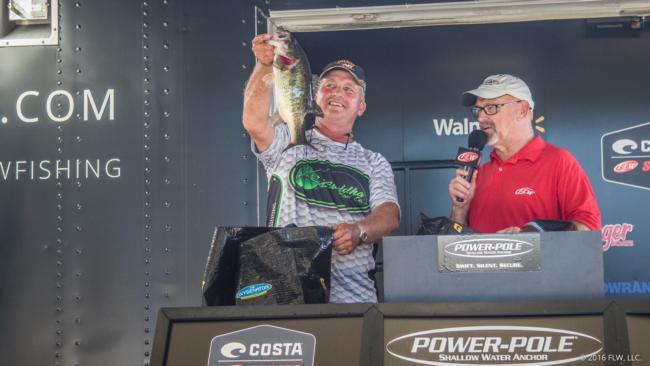 3. Kremer flips and punches for third

Joe Kremer of Osteen, Fla., flipped up 40-14 worth of Okeechobee bass for his third-place finish.

A 1 1/2-ounce tungsten weight, 4/0 Gamakatsu hook and Bitters Bait Muskrat were all Kremer needed to pluck fish from heavy cover.

The Okeechobee veteran worked Eagle Bay and J&S for the majority of his weight.

“It was a good week overall. I did lose two 5-pounders that were five minutes apart on the second day, and I can tell you that I’m still thinking about those fish,” Kremer adds. 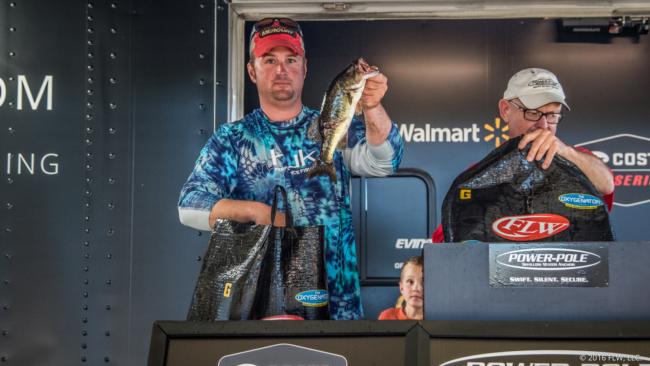 Bryan Honnerlaw of Moore Haven, Fla., has guided on Okeechobee for years and put that knowledge to good use to catch 39 pounds and take home fourth place.

He flipped reeds and nearby matted vegetation each day of competition. Honnerlaw was one of the few anglers that had new areas to fish throughout the tournament – a product of his years of experience on the lake.

“I had saved some fish on the south end of the lake for the final day,” recalls Honnerlaw. “We had that fog delay, and I opted to stay close because of the time we lost. I’m just happy to place where I did.”

Honnerlaw ended up spending most of his time on the north shore using a 7-foot, 11-inch, extra-heavy Halo rod, a Lew’s reel spooled with 80-pound-test braided line, a 1 1/2-ounce tungsten weight and a Reaction Innovations Sweet Beaver (hematoma color). 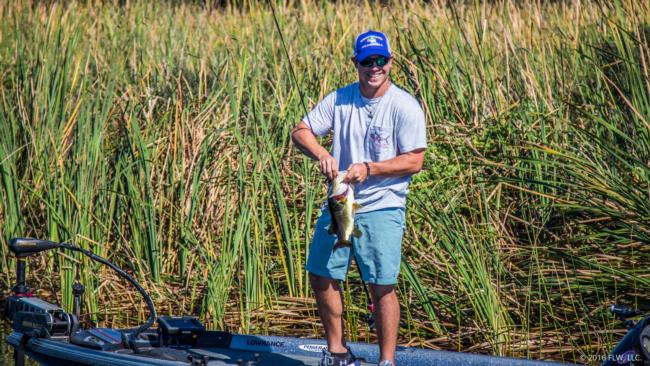 Twenty-one-year-old Justin Morgan of Okeechobee, Fla., was called up off the waiting list at the last second to fish at Okeechobee and showed what he can do on the lake where he grew up. Morgan hauled in 37 pounds of bass and took fifth place.

“I actually work for a congressman up in Tallahassee, and I was heading up there Tuesday to works,” says Morgan. “I figured I wouldn’t be in the event so I started driving up there, and that is when I got the phone call saying I was in the field. I made some calls and got the OK from work to come fish.”

With no time to practice, Morgan went to an area that traditionally holds fish during cold fronts.

“I have a spot that is about a 300-yard stretch of bank, and for whatever reason fish like it during those [cold front] conditions,” Morgan explains. “I was hoping I’d get in the tournament because I know what that spot can do. You don’t get many bites, but the ones you get are quality.”

Each day, Morgan ran to the east side of the lake to hit the magic stretch. He made multiple stops there throughout the day and got at least a few bites each time.

A SPRO popping frog in shad or bluegill colors was the deal for the stretch. He tipped the frog with a trailer hook to increase his hookup ratio.

On the final day when the sun finally popped out and the water temperatures rose, Morgan did some sight-fishing around the canals. A Gambler Ace stick bait on a 1/2- to 3/4-ounce tungsten weight was his preferred bait in that situation.

“It was a crazy week, that’s for sure,” he says. “I had a lot of support from a lot of people, and I can’t thank them enough.” 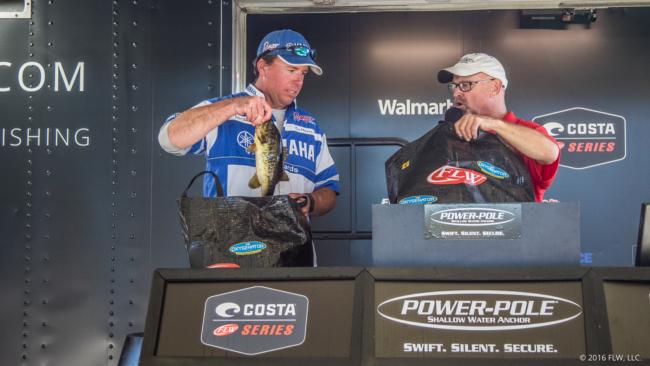 After leading on day one with a 20-pound limit, Peter Cherkas of Des Moines, Iowa, had to adapt to changing conditions just to make it to the top 10. Cherkas was able to scrounge up small limits to bring his three-day total weight to 36-03 and take the sixth spot.

“I found a little hump that had prespawn fish holding on it,” recalls Cherkas. “I caught that big bag on day one from it without ever picking up my Power-Poles. The fish moved with each day, and I had to try and find them but couldn’t get back on the majority of them.”

The hump had a muck bottom around it, but was topped by a shell bed and some hydrilla. Cherkas threw a Sebile Flatt Shad 77SK on a Kistler rod with a Lew’s reel spooled with 12-pound-test Gamma fluorocarbon.

As the fish moved, Cherkas changed over to a swim jig and Yamamoto Senko to get the bites he could. He ran the same rod and reel, except he beefed his line up to 16-pound-test Gamma fluorocarbon for the swim jig.

“I had an awesome week,” Cherkas adds. “Anytime you make the top 10 it feels wonderful.” 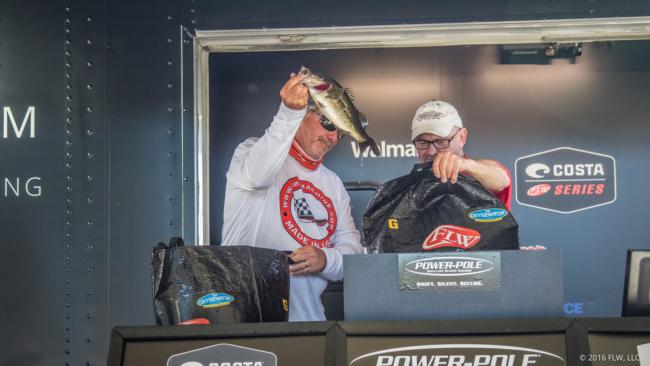 Notching the first top 10 of his FLW career was Jimmy Brewer of Marshall, Texas, who took seventh place on the Big O with a 35-09 total catch.

“When I came here three years ago for the Tour I fished one spot the whole time,” says Brewer, who is entering his third season as a Tour pro. “That was a huge mistake. I made sure that I had fish in almost every corner of the lake this time around.

“Clean water is the key to this lake,” Brewer adds. “You almost have to start over each day on Okeechobee because the wind can change the water so much. I just kept an open mind and kept moving until I found the right water.”

Brewer didn’t catch a single fish on a moving bait in the tournament. He went with the tried-and-true Yamamoto Senko, which he flipped around reeds. His setup included Seaguar braid with a fluorocarbon leader and a Trokar flipping hook. 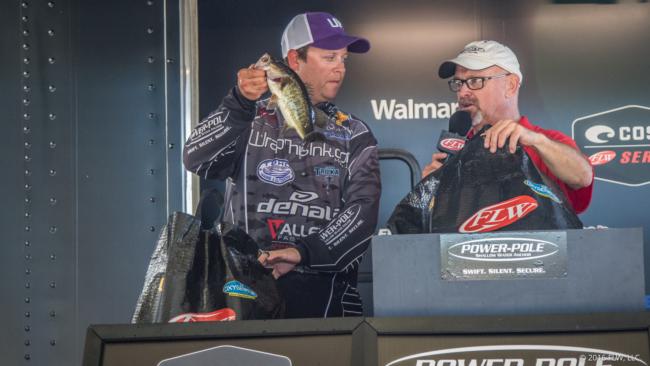 Steve “Boogie” Brown of Altamonte Springs, Fla., is another Okeechobee local who pulled from his bank of knowledge to crack the top 10. His three-day total was 34-07.

Brown focused on well-known spawning areas in hopes that bass waiting to pull up would be nearby. He covered water with a swim jig and slowed down to flip reeds when he found pods of fish.

“I knew that fish would be coming in and going out of these areas all day long,” says Brown. “It was a matter of just getting in the right place at the right time.” 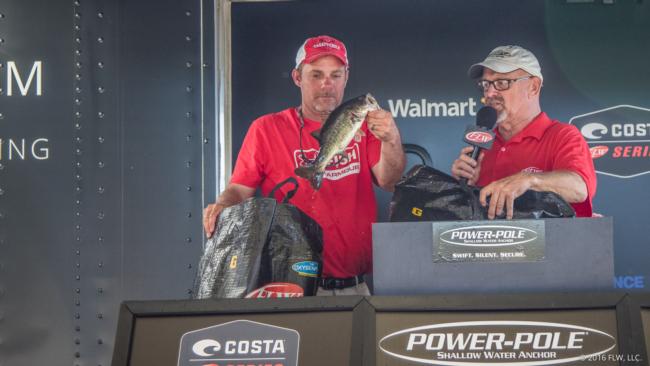 Pat Fisher of Colbert, Ga., stayed close to the takeoff site at C. Scott Driver Park for his ninth-place finish. Fisher weighed in 31-04 over three days.

“There was more matted hydrilla than I’ve ever seen in that area,” says Fisher. “The fish were staging to come in and spawn. The females were in the thick hydrilla, and the males were in the scattered stuff.”

Fisher flipped a black and blue Reaction Innovations Sweet Beaver on a 1 1/2-ounce tungsten weight all week. He paired that with 65-pound-test PowerPro braid and a 7-foot, 11-inch Fenwick flipping stick. 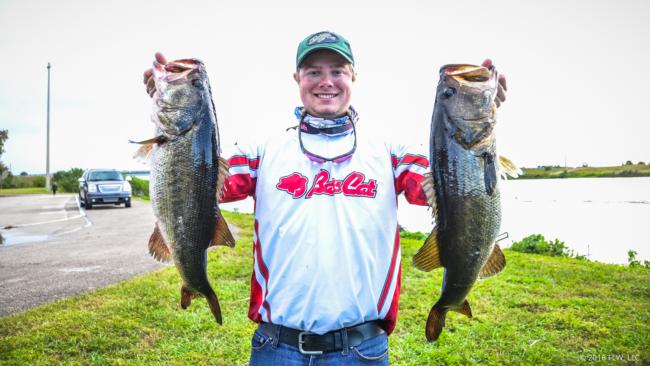 Bailey targeted hydrilla mats and floating mats that had been pushed up against reeds around Harney Pond and Bird Island. Though he cracked the biggest limit of day two – 21 pounds – Bailey struggled in the tough conditions of days one and three and failed to crack double digits those days.

His tackle setup featured two Dobyns rods – an 805 and 795 in the Champion and Champion Extreme series, respectively – paired with Shimano Metanium reels and 65- and 80-pound-test PowerPro braid. A 1 1/2- to 2-ounce Ultra Tungsten weight, Gambler KO Starflash Punch Skirt and Gambler BB Cricket rounded out the offering.

“It’s pretty humbling to get to fish against the level of guys in this tournament,” says Bailey. “To be in the top 10 with guys that fish on the Tour is an awesome experience.”