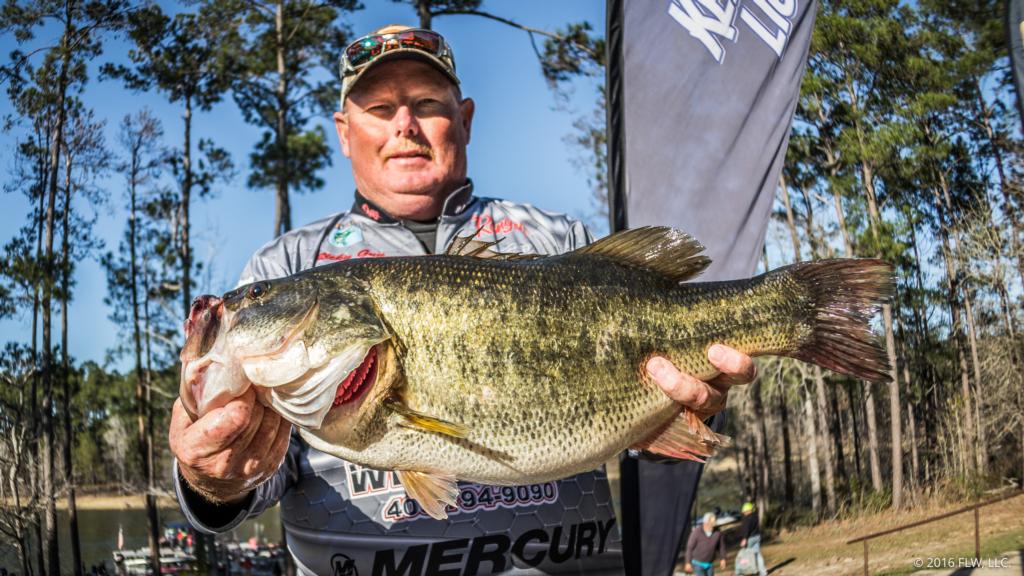 Despite a slow and frustrating start, Ricky Guy of Humble, Texas, regrouped, refocused and surged into the day-two lead at the Costa FLW Series Southwestern Division season opener – presented by Mercury – on Sam Rayburn Reservoir with a two-day total weight of 49 pounds, 12 ounces.

Guy’s day-two catch tipped the scale at 24-4 and was anchored by a 10-pound kicker — the day’s biggest bass. That fish, Guy says, helped erase some early disappointment and allow him to settle into a productive frame of mind.

“In the area where I fished yesterday, I caught them on a Rat-L-Trap, but I went back today and there were two or three boats in there already,” Guy says of his day’s beginning. “I just blew it off — I didn’t feel it.

“I had some flipping fish, but I didn’t know they were that good. I went flipping today and that’s how I caught every one of them.”

Having worked spots in Caney Creek and Veach Basin on day one, Guy shifted his focus to an area north of the 147 Bridge known as The Canyons. Here, vast expanses of flooded brush mixed with cypress and willow trees offers superb habitat for prespawn bass, as well as bed fish.

“It was spread out with everything in 3-4 feet,” the Texas pro says.

Guy caught his day-two fish by flipping a Texas-rigged beaver and a 1/2-ounce black and blue jig with a craw trailer. Productivity was evenly split between the two baits.

“I flipped both baits in the same area,” says Guy. “I’d go down it one way and come back the next way.

“I had a really slow morning; I didn’t start catching them until 9-9:30. I was worried there for a little bit, but then it picked up pretty quickly.” Guy explains describing his day’s turn-around.

“It was like a little feeding spree and I caught about 10-12 keepers today.”

The 10-pounder ate around 10:30. That was Guy’s third fish of the day and it could not have come too soon.

“For a little bit, I was going too fast and panicking a little bit. So when I settled in, it just started coming to me. Everything was working.”

Noting that he didn’t get bit everywhere within the seven or eight spots he fished, Guy notes that diligence was the key to his success.

“I had one little area that produced a little better than anywhere else,” Guy recalls.

According to Guy, today’s warmer, calmer weather helped position the fish tighter in the bushes. His 10-pounder had blood on her tail — a clear sign of a fish fanning out the bed.

With his eye on day three, Guy says he took it easy his fish in hopes of repeating his performance in the final round.

“There’s not that many fish (in The Canyons) and there were already a lot of boats in there,” he says. “I got what I needed and I quit fishing.” 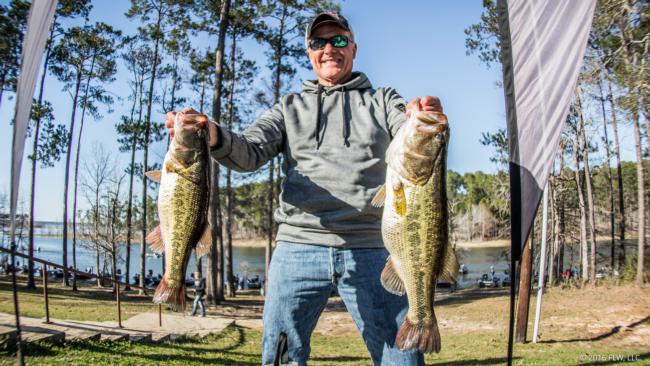 Typically, fishing behind flipping legend Denny Brauer means a long day of wondering when you might pick up the random fish the Del Rio, Texas, pro missed. Today, Randy Hicks of Lumberton, Texas, not only picked up fish, he picked up an invaluable tip that likely accounted for him taking over the co-angler division with a two-day total of 32 pounds, 12 ounces.

“I was trying to flip behind him but I wasn’t catching anything and he was culling,” Hicks says. “So I said, ‘Coach me.’

“He said: ‘You need to get off that braid. He actually picked up a rod with 25-pound Seaguar fluorocarbon and handed it to me.”

At first, Hicks was reticent about flipping heavy cover without braid, but a limit that weighed 14-1 changed his mind.

“I wasn’t comfortable with which knot to tie, but Denny showed me how to tie it and how to peg the weight,” says Hicks.

“It started off slowly this morning and we probably didn’t start catching fish until about 10 o’clock,” Hick says. “Then, from about 11-1 o’clock is when we caught most of our fish.”