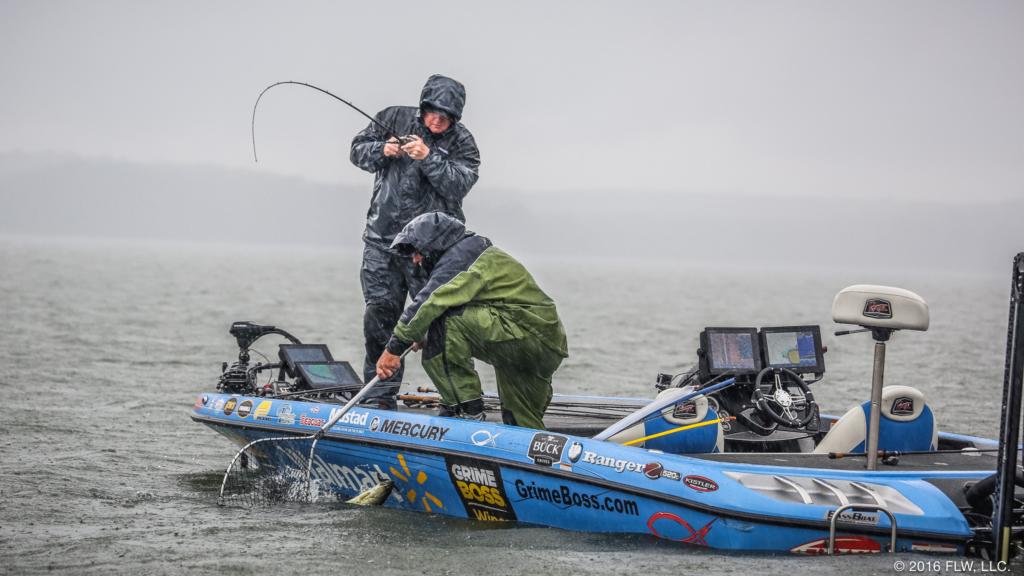 One thing has gone according to plan this week at the Costa FLW Series Central Division event presented by Lowrance on Kentucky Lake: the weather.

That’s right, the weatherman nailed this week’s seesawing conditions, starting with sunny skies and highs in the 80s on Thursday and mild, overcast weather on Friday. And today, he was spot on with his forecast for morning thunderstorms and heavy rain. Go figure.

Now the sun is trying to shine through hazy skies, and the mercury is rising. The rain did its job already though. Everyone on Kentucky Lake looks a little like a drowned rat, or maybe a prune. The wind has also picked up out of the south in the wake of this morning’s front.

As for the fishing, it’s a little funky right now, but the bass are biting. The only two pros that we know of to turn left out of Paris Landing State Park and run north this morning were tournament leader Travis Fox and second-place angler Mark Rose. Fox put two small ones in the boat early then struggled to even get a bite on his second spot. He was prepping for a very long run to the lake’s northern end when we left him.

Rose arrived on his first spot to find a local boat right on his waypoint, working on his fish. He couldn’t get anything go there, and he’d more or less staked his entire tournament on the shad spawn pattern happening on that spot.

We caught up with him farther south on a point in the mouth of a creek. The point housed a pretty big school that Rose worked on for a while. He must’ve landed 15 or 20 fish in the 90 minutes our reporter was with him, but the biggest one weighed 3 pounds. Several weren’t even keepers.

“Have you ever seen someone catch this many fish on Kentucky Lake and not catch a 5-pounder?” Rose asked. “This is fun, but it’s not going to win any tournaments.”

Rose had in mind to go flipping, but the conditions really didn't favor a flipping pattern. After a little head scratching, he tied on a spinnerbait, buzzbait and bladed jig and just went fishing. This sunshine will probably eventually drive him back to flipping, and he's considering running back north to the shad spawn spot. That would probably require gassing up somewhere along the way.

No one down south is lighting it up, but the action is steady. The other eight pros are mostly flipping and targeting some hard-bottom drops and points for staging fish.

Ramie Colson Jr., who’s in third place, has a limit and has started to upgrade. Sunshine should help him, and could give him a shot at a comeback.