Top 10 Patterns from the Potomac River 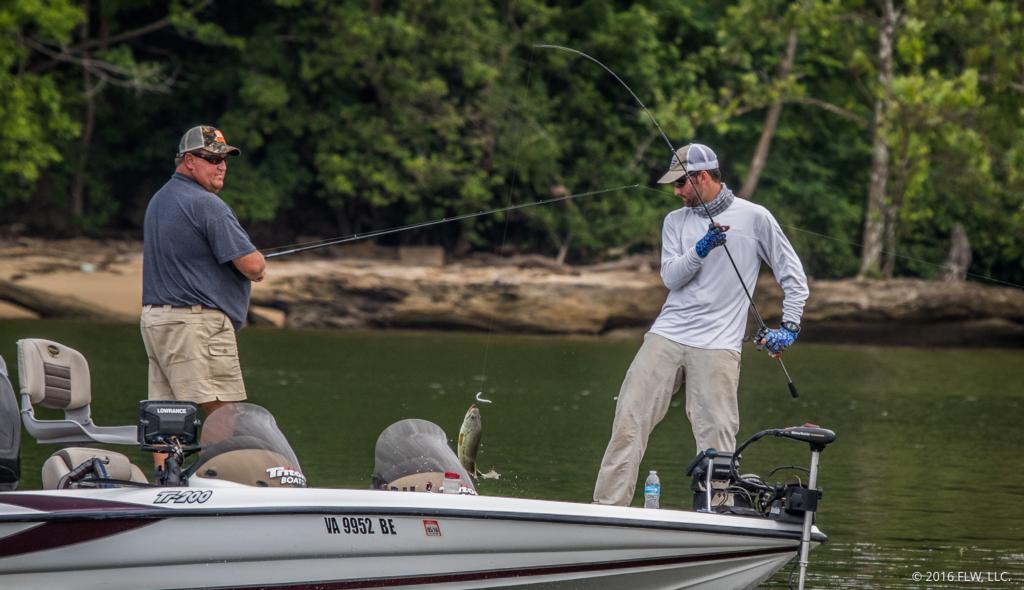 Water flow controlled much of the action in the Costa FLW Series Northern Division opener presented by Plano on the Potomac River. Tournament morning started with outgoing tides and anglers caught fish during the fall and the rise. With the full moon only a few days after the event, stronger tides pushed the water higher than normal and put more water in the backwater creeks and pad fields.

Weather factored into the week, as well. The thunderstorms forecasted for days one and two never hindered tournament hours, but day two saw windy conditions stirring up some key areas. Skies cleared for the final day of competition and anglers fished in calm, sunny conditions.

Fortunately, the combination of tidal waters and filtering grass kept several areas in play. New York pro Casey Smith found just such a spot and sacked up the winning total of 51 pounds, 6 ounces. 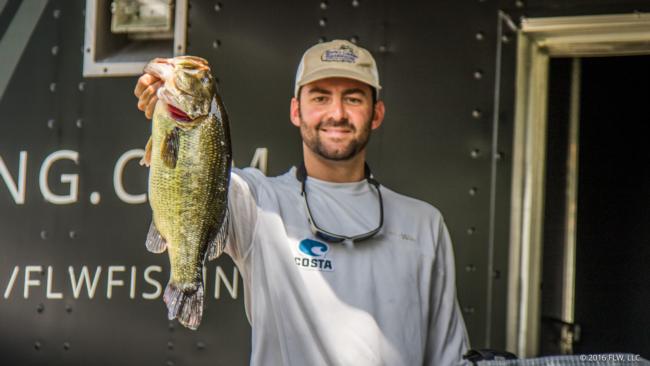 Plagued by lost fish, Virginia pro Charlie Machek made enough of his opportunities count to take the runner-up spot. After placing fifth on day one, Machek yielded one spot on day two before surging up to second place with a combined weight of 49-11.

“I had horrible execution; I probably left a pound or two every day, including the final day,” Machek says. “I only had three culls all week, but I caught the right ones.”

A limit of 18-1 on day three clearly boosted Machek’s performance and that was largely due to a key grass bed he had located during a previous Potomac tournament.

“I didn’t get to go to my big fish spot on day two because it was blown out, but I pulled in there on day three and in the first 10 minutes, I caught my big fish,” Machek says. “Right before it was time to come in, I culled one more.”

Machek caught his fish with a mix of Texas-rigged Yamamoto Senkos on 5/0 Gamakatsu EWG SuperLine hooks and 1/8-ounce sinkers, a Zoom UV Speed Worm with a 3/16-ounce weight and a 3/8-ounce Bait Buffet Swim Jig with a craw trailer. He pegged his Senko weights, but left the Speed Worm weight unpegged, as this allowed better action.

After losing several good fish on the swim jig during the first two days, Machek switched to the Bait Buffet model because the stouter hook helped him keep his fish buttoned up.

“When I’d hook ‘em, I’d get like 10 cranks and they’d get down in that grass and I’d lose them,” he says. “So my buddy, who makes these baits, threw a couple of them in my boat. That helped on the final day.”

Machek was adamant about the impact of his Power-Poles. Particularly during the latter half of day three, targeting well-defined spots on a nearshore grass flat played a big role in his game plan.

“You really can’t fish out here without Power-Poles,” Macheck says. “I probably caught half of my fish because of them.” 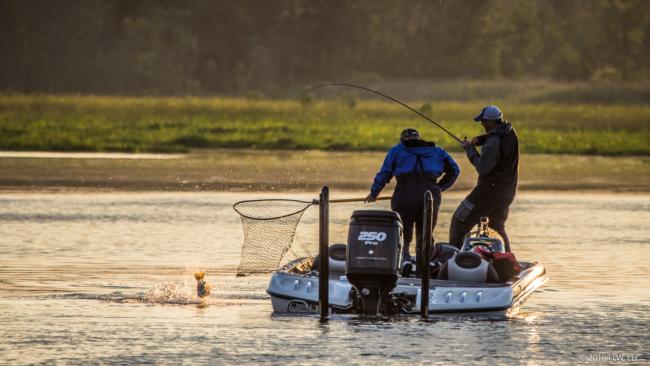 We typically think of sight fishing as a spawn-related deal, but third-place pro Ron Nelson says he was visually picking out his targets in shallow grass beds. Doing so delivered the third-place total of 48-2.

Nelson says he found his best action during the last hour of the outgoing tide and the first hour of the incoming. Water clarity and food delivery were the two main factors.

“When the tide is drawing too fast, the area gets muddy, but there was a certain stage toward the end when it gets clear,” he said. “It’s still pulling water and pulling food out of the shallows. That’s when the fish were looking to feed.

“Once I figured out the area, I knew what clumps of weeds they’d sit on. I’d make long casts and I’d see them come and eat it.

Nelson caught his fish on wacky-rigged green pumpkin and black/blue Yamamoto Senkos. The key to his success was adjusting his presentations to the tide stage.

“When the tide was right, you could really snap it and keep it really high in the water column,” he says. “Those fish would chase it down and eat it quickly.

“When the tide was not right, you had to fish it really subtly. You didn’t snap it or work it a lot and the bites came on the bottom.”

Nelson said he could always tell if the tide stage was right by watching fish behavior.

“When the tide was right, if you’d see two or three fish together, the big one would always charge it first,” he says. “The other key was that I had to be going against the current, because if I went with the current, I was pushing the fish.” 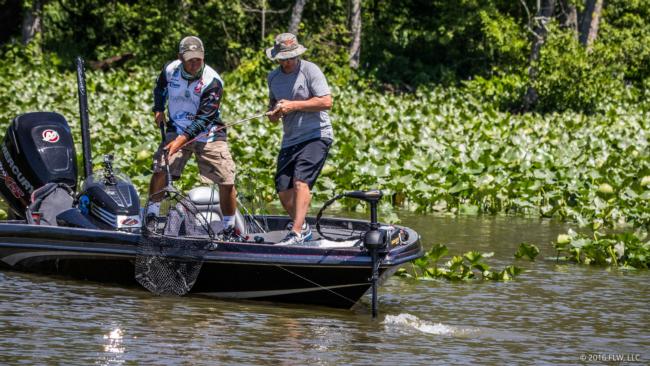 4. Hastings grinds it out for fourth

Maryland pro Aaron Hastings posted a pair of matching scores (15-2) on days one and two and added a 16-12 in between to take second place with 47-0.

Noting “determination and hard work” as the foundational elements of his success, Hastings caught his fish on a 3/8-ounce swim jig with a Zoom Swimmin’ Chunk trailer and a chartreuse/white spinnerbait with double Colorado blades. Hastings ensured his spinnerbait efficiency with a 1/0 trailer hook.

Despite the fact that kickers eluded him, Hastings said he was pleased with what he weighed. Essential to his effort, he said, was monitoring water flow and keeping himself in areas where the tide stage promoted active feeding.

“It was just a matter of staying with the tide and making good decisions,” he says. “I really fished a clean week. I didn’t lose any fish.

“I caught just about everything that bit, but I never got a big bite. I could catch steady fish all week, but I never saw a big fish all week. That’s the key to winning this event — you have to have a big one or two a day.” 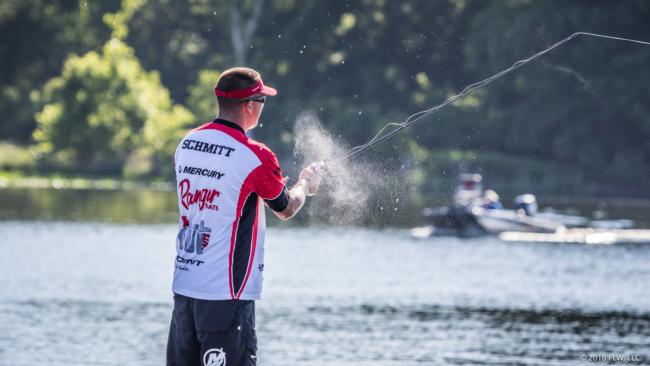 With the Walmart FLW Tour on Lake Champlain scheduled for the week following the Potomac event, tidal Jedi Bryan Schmitt contemplated skipping the contest he’s won three times. Good for him, his wife’s nudging encouraged the Maryland stick to fish his home waters and Schmitt sacked up 45-12 for a fifth-place finish.

“It was a lot tougher on day three; I caught one little one first thing and then I lost a really big fish and it just got in my head,” he says. “It had me spun out and running around.”

Eventually righting the mental ship, Schmitt got his head back in the game and caught most of his final-round weight in the final 20 minutes.

Schmitt says he caught most of his fish on a prototype Riot Baits Recon bladed jig with a blue steel Riot Baits Fuzzy Beaver trailer. He bit the front half off the trailer for optimal profile.

“It was just patience,” Schmitt said of his meticulous work. “It was just sitting on the fish and grinding through the tides.” 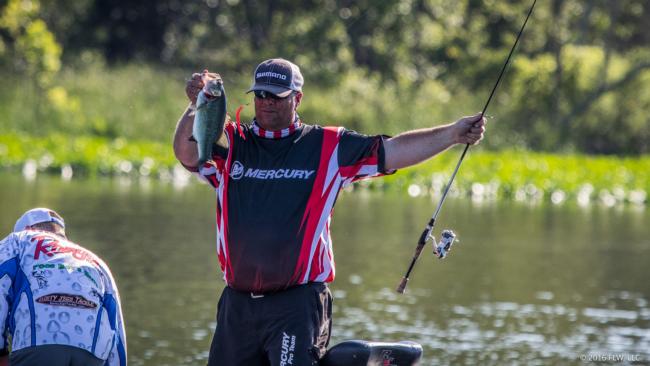 6. Wilder worms his way into sixth

His game plan differed from the majority of his competitors who incorporated some type of reaction baits into their delivery. Wilder fished the entire event with unweighted worms, like the Yamamoto Senko. Green pumpkin and bright red were his top colors for these worms fished on 4/0 Gamakatsu wide gap hooks.

“It was all finesse fishing,” Wilder says. “I couldn’t get the big bite, but I put together about 15 pounds a day. I just stayed in one area and ground it out.” 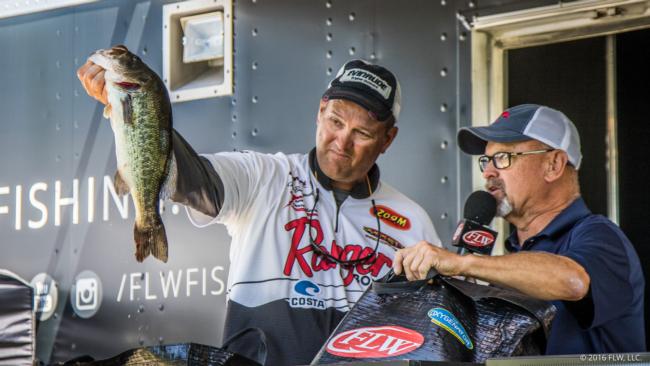 Placing 15th on day one with 15-10, Chris Baumgardner earned his final-round spot by improving to eighth for day two with 15-13. Rising a notch on day three with 13-9 gave him an even 45 pounds for seventh place.

Baumgardner said he was able to get bit early and late on periods of moving water. Although he generally junk fished, two tactics rose to prominence. 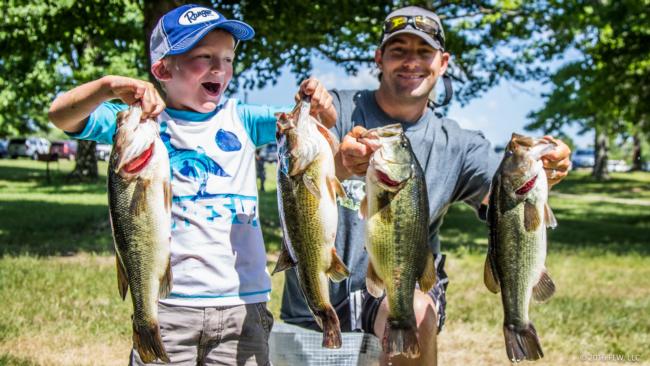 Massachusetts pro Joe Wood made a big move on day two by improving on his 20th-place day-one finish and reaching the final round in seventh place. He’d end up yielding one spot with a tournament total of 43-8.

Wood did most of his work with a 1/4-ounce black/blue Strike King Hack Attack Heavy Cover Swim Jig with a green pumpkin Reaction Innovations Little Dipper. He backed that up with an unweighted green pumpkin Yamamoto Senko.

“I found a couple of areas that were stockpiled with fish and there were times I caught them on every cast,” Wood says. “I was just fishing milfoil beds.

“I had a particular pattern I was working in a couple different places. On the low outgoing tide, the fish were in there, but on day three, that bite disappeared.” 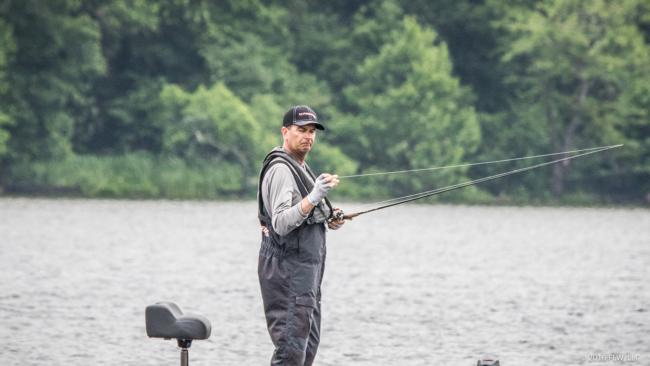 Early momentum positioned Jeff Coble to finish ninth with 43-7. The North Carolina pro grabbed the number-two spot on day one after catching a limit of 17-14 with an atypical tactic — a Rio Rico popper.

Picking grass off nearly every cast made for tedious work, but Coble found the fish more receptive to this bait than the dozens of frogs they were seeing. Day two saw that bite waning, so he worked in a 1/4-ounce Dave’s Tournament Tackle swim jig with a green pumpkin Zoom Super Speed Craw trailer.

In the final round, he knew the weekend recreational pressure would likely nullify the popper bite, so he stuck with the swim jig.

“I don’t like grass fishing because you never know which blade of grass will have a bass behind it,” Coble joked. 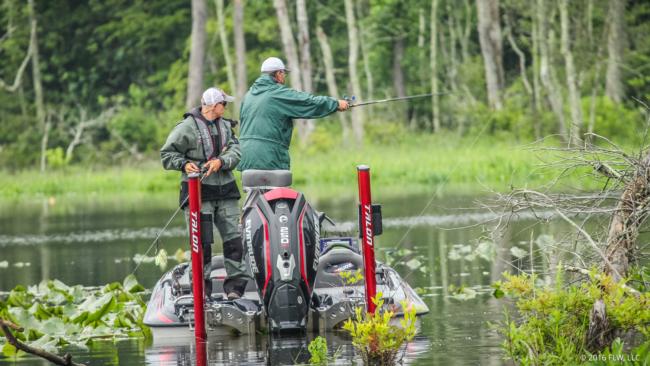 Day-one leader Bill Chapman got off to a strong start with 17-15 by pushing far back into Mattawoman Creek and targeting clumps of pads on low tide. The combination of super-high water and increasing boat traffic in his area caused that deal to dwindle on day two, as the West Virginia pro dropped to fourth place with a limit of 14-2.

By day three, Chapman found himself scrambling to find four keepers that weighed 5-7 and gave him a three-day total of 37-8.

Chapman caught fish on a squarebill and a buzzbait, but his most productive option was flipping a Missile Baits D Bomb in the bruiser flash color. He Texas-rigged the bait with a 6/0 hook and a 3/8-ounce weight.

“The bites would come as soon as the bait went in,” Chapman said. “You’d just drop it in there and they’d pick it up.”