Top 10 patterns from Lake of the Ozarks

How the top 10 figured out early fall bass 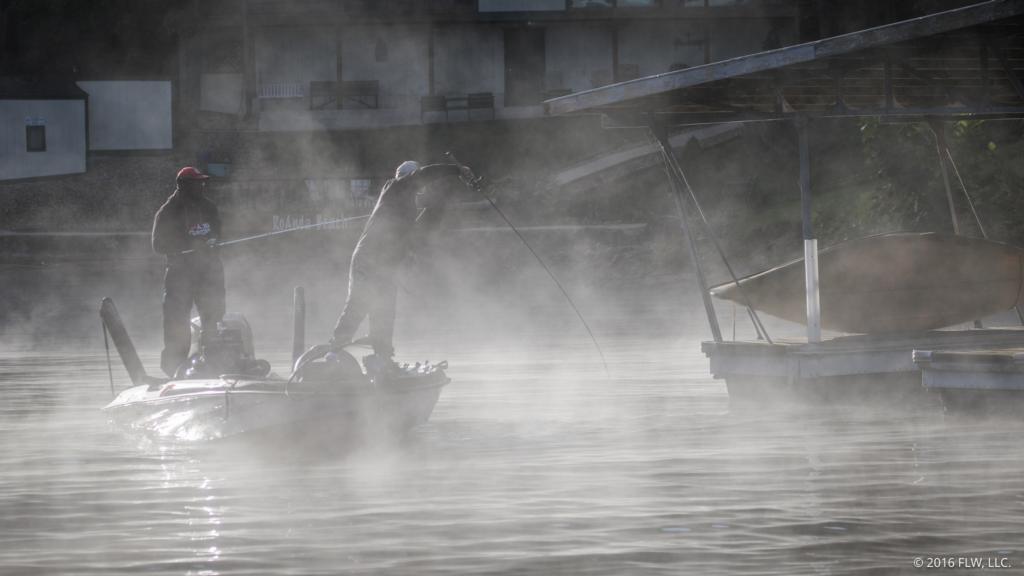 Lake of the Ozarks is giant and filled with cover, from about a billion docks to laydowns, brush piles and rock. For the competitors in the Costa FLW Series event presented by Evinrude, the sheer size of the fishery proved daunting at times, but in the end a stout group of locals and a few out-of-towners figured it out. Duke Jenkel largely hunkered down in one section of docks for the win, but he wasn’t the only one to catch ’em good. 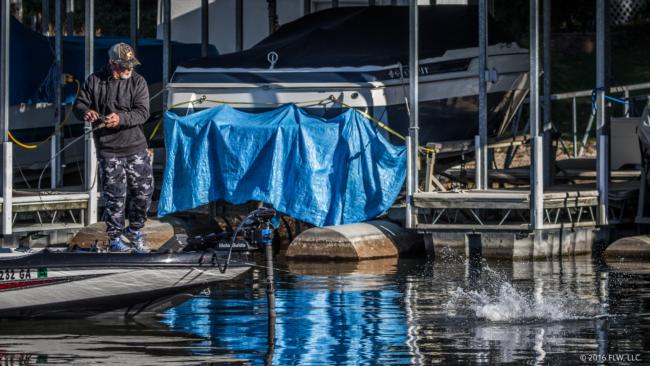 Mark Tucker of Kirkwood, Mo., has won twice before on Lake of the Ozarks, and he very nearly did it again this week. He totaled 51 pounds, 4 ounces for second and boosted himself to third overall in the Central Division Angler of the Year points. With that, he’s now finished in the top five in the Central Division for four straight years.

To catch his fish, Tucker employed a two-pronged approach to docks down in the lower end of the lake.

“There were two different patterns,” says Tucker. “One was a deep pattern in brush on the outside edges of docks. As the afternoon wore on, the bigger fish would slide up and get shallow, but you wouldn’t get many bites. You had to check the fronts and the sides, and every now and then I’d check the backs. When I got bit on the backs I’d run that.”

Tucker says that the areas around the fronts of docks that he fished were usually about 10 to 12 feet deep, and that the areas around the backs were generally about 4 feet deep. For baits, Tucker used a Zoom Magnum Trick Worm and a regular Trick Worm. He used 3/16- and 1/8-ounce homemade shaky heads with a special beefed-up hook to do battle around the docks. For both worms, Tucker used the green pumpkin gold color and dyed the tail chartreuse. 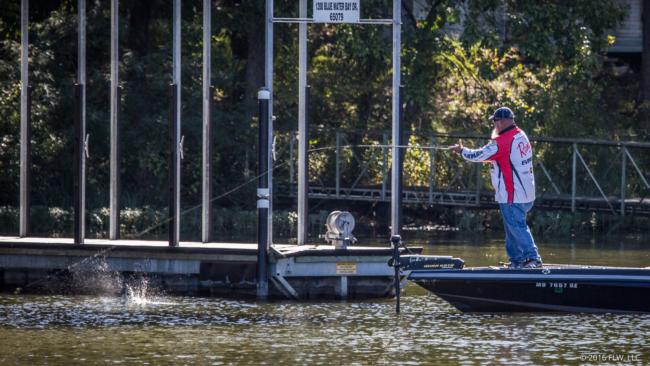 Sacking up 51-1 over three days, Dion Hibdon of Sunrise Beach, Mo., was on the pace of the leaders the first two days before faltering on the final day.

Hibdon is an expert with a jig in hand, and has as much confidence as anyone when it comes to skipping docks. So, it’s no surprise that he banked on them pretty hard.

“I wanted to be around ones that were 10 foot or less the bulk of the time, and if I could find ones that weren’t in the back ends of the creeks that was better, like on the sides of points and things,” says Hibdon. “You had to look for the ones that hadn’t been beat. That Big Bass Bash [a major local tournament held the weekend before] just cripples this lake, especially the docks in the back.”

Hibdon says he’d been on the water almost every other day for the few weeks before the tournament, which allowed him to follow the bass to the depths he found them at during the tournament. For location, Hibdon primarily concentrated around the Hurricane Deck bridge.

“Lawson [Hibdon’s son] finished third last year in the BFL Super Tournament and found every dock he fished on the last day on Google Earth,” says Hibdon. “You could look down and see the lighter color [of the water, indicating shallower areas]. I used most of that today [day three], stuff that he had found last year. Just 2 or 3 feet of water makes a huge difference to a dock, but the docks were just something to fish around. You had to be in the right depth zone all week long to catch the better ones.”

While Hibdon did catch one good one on the final day with a Crock-O-Gator Headknocker buzzbait, he says that the vast majority of his weight came on either a 3/8-ounce homemade jig trailered with a Reaction Innovations Sweet Beaver or an 8-inch Strike King Bull Worm on a shaky head. 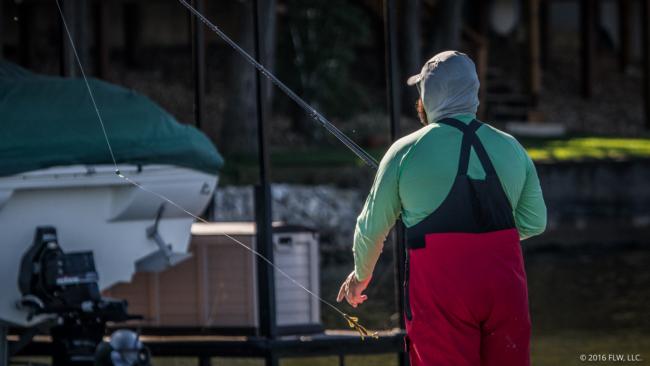 Moving from eighth to fourth on the final day, Dustin Evans of Eads, Tenn., tallied 48-13 on the week and fished differently than about everyone else.

“I mainly fished an underwater spring I found in the back of a creek,” says Evans. “I found it about five years ago for a two-day championship, and I came across a spot where it drops from 17 to 20 and then up to 14 feet. I marked it and ended up winning that tournament. I came up here and checked it and got a few bites, and there were fish on it.”

Evans says that he would saturate the area with a YUM Mighty Worm and a Zoom Magnum Trick Worm on a 1/2-ounce shaky head, and he Carolina-rigged a Zoom Brush Hog. According to Evans, though you couldn’t discern a temperature difference on the surface, there were shell beds on the bottom around the spring.

Evans also worked in one secondary location to his game plan, targeting a shallow flat that was loaded with shad and a few bass using a silent Strike King Red Eye Shad in the sexy blueback color. On the second day, that flat produced a key 4-pounder for him. 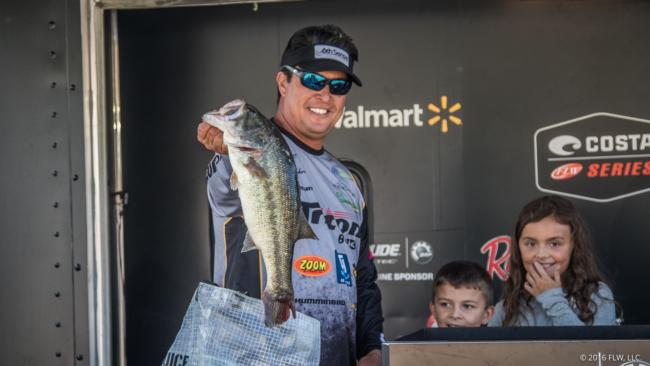 5. Sykora mixes it up for fifth

Sacking up 14 and change on days one and three, a 19-pound bag on the second day keyed Marcus Sykora’s tournament and gave him a total of 48-6. Sykora, of Osage Beach, Mo., has won a pile of events on Lake of the Ozarks, but hasn’t quite sealed the deal in a Costa FLW Series event yet.

“More than anything I was catching them off shallow boat docks,” says Sykora. “I was trying to catch a big one early off topwater because that big bite is so important now. If that didn’t work I’d fish what I call ‘in and out.’ I’d fish in and flip some shallow boat docks, and then I’d fish out in about 12 to 18 feet. I just did that all event long.”

Sykora says that he mostly focused on large docks with lots of shade along flatter banks and points. When he fished “out,” he targeted brush, rocks and a variety of little places gained through years of knowledge about the lake. Averaging 14 keepers per day, Sykora just couldn’t pull together a big bite consistently.

Sykora says he relied on a 6th Sense Crush 300DD, a Chompers Brush Jig (Davenport special) with a Chompers Double Tail Grub in rootbeer green as the trailer and a Zoom Brush Hog on a 3/8-ounce Texas rig. 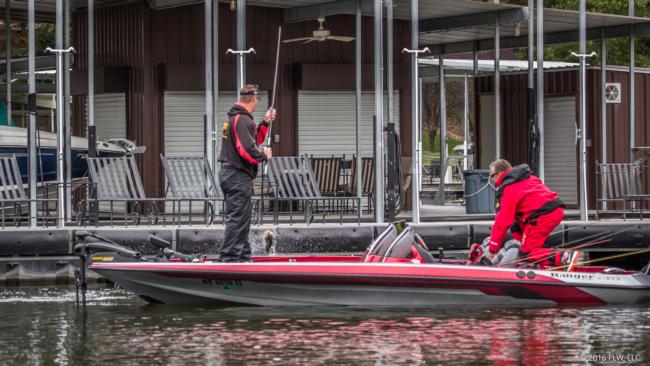 Brian Maloney of Osage Beach, Mo., set a blistering pace on the first two days, but only weighed four bass on the final day. In all, despite leading on day two, the former BFL All-American champ settled into sixth with 47-2.

Targeting docks was the name of the game for Maloney as well, as like Hibdon, he looked for a specific type of dock and tried to manage the pressure.

“Usually this time of year the shad are back farther,” says Maloney. “Usually from 1 foot to 3 foot on the last docks in the pockets is a very solid pattern. I knew the Big Bass Bash was going to hurt those docks, but Ameren [the power company that manages the lake] dropped the water too. So that had those fished moved out to about 6 or 8 foot in the pockets.”

In addition to targeting mid-depth docks in the pockets, Maloney targeted shallow docks on the main lake.

“To me, most folks that fish out on the main channel tend to overlook fishing bottom baits, and I knew those fish give me an opportunity,” he says.

Mixing the different types of docks worked well for Maloney, and he caught big fish off each type on both of the first two days. Maloney mixed locations as well, and fished up the lake a ways in the stained water on day one and down the lake in clearer water on the second day.

For his baits, Maloney mixed a Zoom Magnum Trick Worm on a 1/4-ounce shaky head and a 5/16-ounce custom jig with a Strike King Rage Chunk as the trailer. 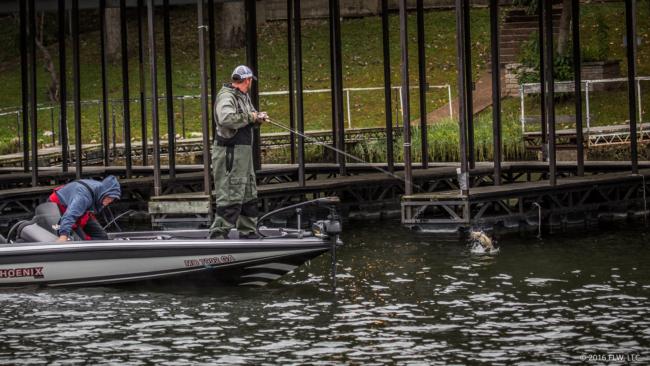 7. Steckler relies on docks as well

Steckler made waves on the first two days by targeting the backs and fronts of docks. On the fronts of the docks, in slightly deeper water, he’d flip or cast a Zoom Ol’ Monster worm (junebug). On the backs of the docks and under shallow walkways, Steckler wanted a presentation that looked more like a crawfish or bluegill, and used a Reaction Innovations Sweet Beaver (junebug) on a 1/2-ounce Texas rig and a 1/2-ounce Trophy Bass Company Trophy Pro Jig with a Yamamoto Flappin’ Hog for a trailer.

As for the dock location, Steckler wanted to see the right bait.

“I was looking for those big gizzard shad. You’d see a big ball of them up real shallow,” says Steckler. “That’s where I wanted to be. In practice it seemed like it was everywhere I went, but today [day three] it was really tough.”

Though many of his bigger fish came shallow at the backs of docks, Steckler did have a fish-catcher in the worm.

“With the worm, I would peel line real quick to make sure it fell straight down,” says Steckler of his presentation. “Then it’d get to that crossbar and just stop or swim off.”

Steckler’s stated goal was a top 10 and qualification for the Costa FLW Series Championship on Table Rock. He accomplished the first goal in style, but may end up falling short of the second, as he finished 47th in points on the year – just out of the top-40 cut – and will have to rely on some pros electing not to fish the championship to get the call. 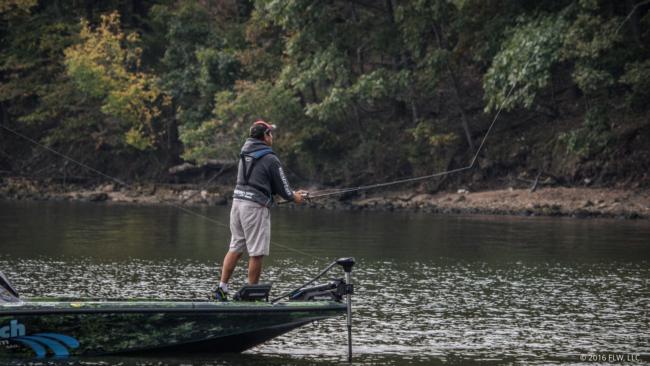 Fishing deeper than anyone else, Shawn Kowal of Linn Creek, Mo., sacked up 44-9 on the week.

“In practice I side-scanned some spots, and there were fish on them,” says Kowal. “The shad were down, and that’s where the fish were at. The problem was the second day the wind kicked up, and I couldn’t stay on those spots. So I started going to the bank and flipping and throwing a buzzbait. Between the docks I’d be throwing a buzzbait, and behind the docks I’d be flipping a jig.”

Out deep, Kowal opted for a 10-inch Berkley Power Worm (plum and blue fleck) on a Texas rig. Up shallow, a Crock-O-Gator Headknocker buzzbait and Crock-O-Gator jig got the call.

There was nothing too out of the ordinary about Kowal’s dock pattern, but his offshore fish certainly set him apart. Kowal says that he usually had his boat sitting in upward of 27 feet of water, and was casting into about 18 feet of water.

“It didn’t really make a difference what was down there. You just had to have shad,” says Kowal. “I would say the fish were a little off the bottom. I was hopping the worm pretty good and moving pretty fast.” 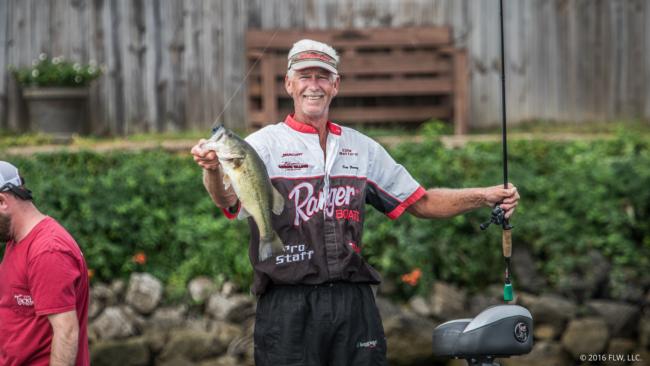 Finishing ninth, Jim Young of House Springs, Mo., totaled up 44-1 for the tournament.

Covering a lot of water each day, Young says he was keying on docks with brush and solo brush.

“Everything came off brush,” says Young. “I had some waypoints that I’d hit and then cover water on a pretty good stretch with bait around it. I threw a 7/8-ounce jig, whether I was fishing from a foot deep to 16 feet deep, so I covered a lot of water every cast.”

Young’s jigs were homemade and skirted with either black and blue or black and brown round rubber and tipped with a matching Zoom Super Chunk. 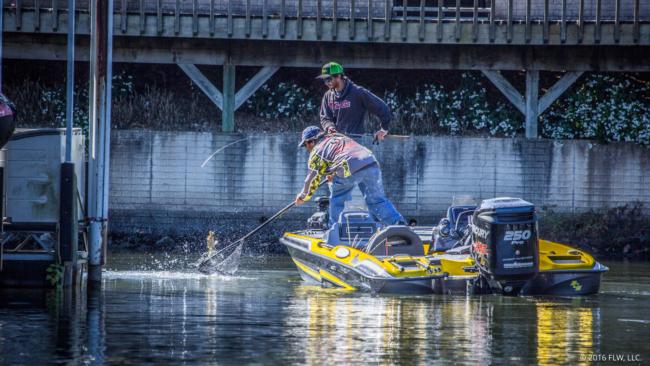 10. Blevins goes all-in on the jig

Dustin Blevins of Harrison, Ark., had been to Lake of the Ozarks just twice before, and still turned in an admirable showing among a group of stout locals. In all, Blevins earned 10th with 42-7.

“Flipping docks close to the channel is how I caught about every one,” says Blevins. “I had three or four areas and just rotated them every day, and they reloaded every day except today [day three].”