Sunny, calm conditions are tough, but the fishing is getting better 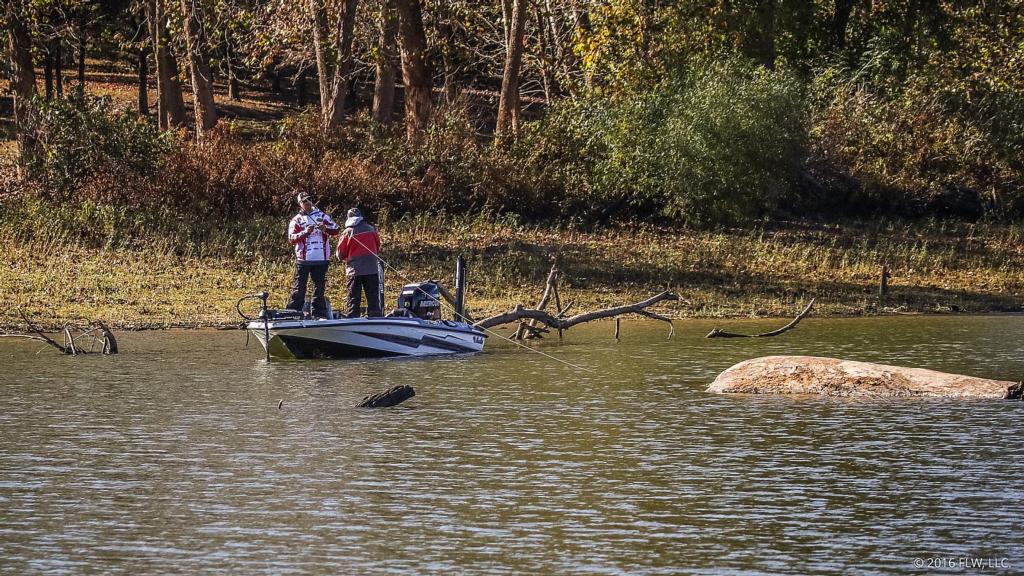 Fourth-place pro Cody Bird has had a good day so far. He has about 11 pounds. Bird isn't willing to reveal what he's using right now, but we'll get it out of him tomorrow because it looks like he's going to make the cut.

A few anglers have stuck with the topwater approach despite the post-frontal conditions. Other popular baits include umbrella rigs, shaky heads and jigs. It's all pretty standard stuff for the Ozarks this time of year.

Jeremy Lawyer might have nailed it on the head when he told one of FLW's reporters that today is a whole new day. He re-fished a bank today without a bite, and that bank produced three keepers on day one. He's already thinking of running new water, and the first flight still isn't due in for two hours.

Fisher is sticking with his game plan and fishing up the James River around shallow wood. It seems to be paying off for him, per our previous post. 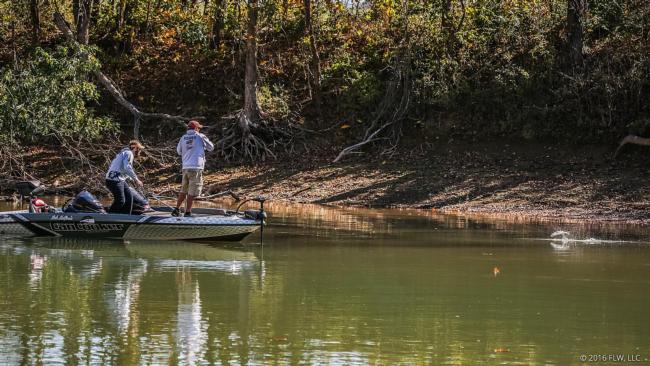 Tournament leader Pat Fisher keeps truckin' along. He just landed his fifth keeper, a smallmouth, but the coolest part was that a 5-pound largemouth followed the smallie to the boat. He's obviously around some good quality fish. 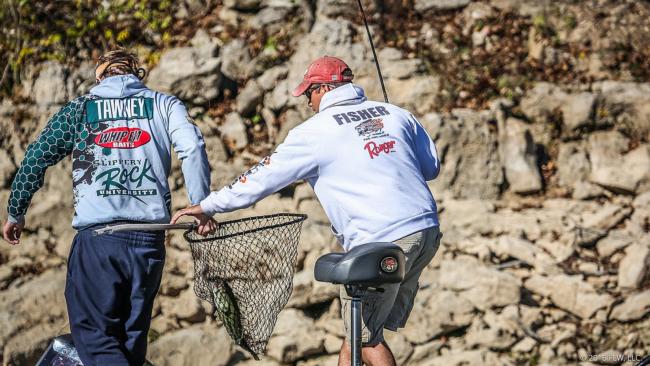 Travis Fox caught a solid keeper early on. He's got enough experience here and on other similar reservoirs to know how to tackle a post-frontal fall day. The Rogers, Ark., pro is in seventh place.

Sarcoxie, Mo., pro Jeremy Lawyer has similar experience in the Ozarks, and he has a pair of keepers to prove it. Lawyer is in 17th place.

Tournament leader Pat Fisher has caught three fish with his shaky head. The topwater bite seems to be done for him.

Currently in second, Bradford Beavers of Ridgeville, S.C., hadn't even had a bite by 11:45. That changed after he made a short move. Beavers caught a 3-pounder on his first cast at the new spot. That's a kicker with today's challenging conditions.

Tournament leader Pat Fisher made a change a few minutes ago that might be the key on what is likely to be a challenging second day. He put down the buzzbait and walking bait that he used to start the morning and picked up a shaky head. Fishing wood and brush up shallow, Fisher landed a small keeper largemouth to get his limit started.

Under high, bright skies – typical post-frontal bluebird conditions – switching to finesse tactics and slowing down could be the smartest move.

We've seen very few fish catches to report so far. Stat tuned for more updates, and follow along via the live Twitter feed.

Several of the leaders fished up the James on day one, and despite the delay today, they made the long run up the James again today. Zack Birge and Pat Fisher are fishing pretty close to each other. They rolled into the area about 20 minutes ago. No fish to report yet. 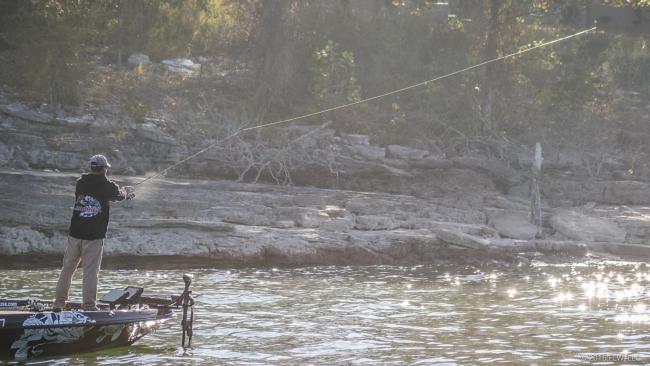 Now that we've got this thing started, here's an update on the current conditions.

The barometric pressure is rising.

After a delay of nearly two and a half hours, day two of the Costa FLW Series Championship is underway at Table Rock. 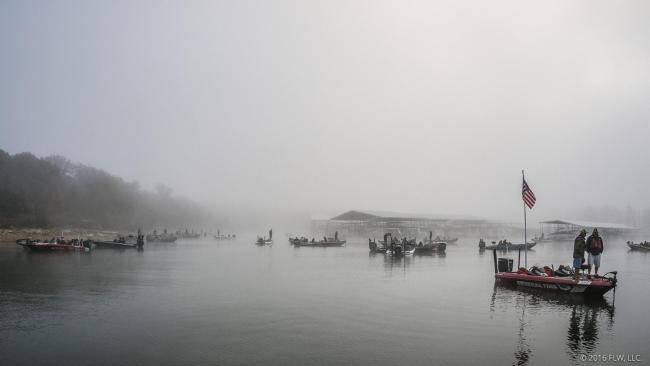 Mother Nature doesn't want anybody to pester Table Rock bass today. Just as the anglers reached the flag boat to start takeoff, a wave of fog rolled back across the State Park area, and the launch was delayed once again. No word on how long this delay will last, but we'll keep you posted.

At around 9:10 a.m., FLW got the green light for takeoff from the local water patrol officers. The field will launch at 9:20 – nearly two hours after the scheduled 7:30 takeoff.

The sun has gotten up now, so any remnant fog shouldn't last too long, and most of the lake is already clear. 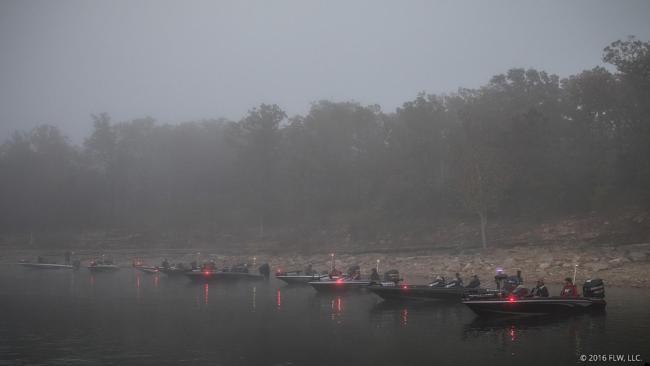 The 192 boaters fishing the Costa FLW Series Championship on Table Rock have had to put their Forrest Wood Cup dreams on hold for a little while. The day two takeoff has been delayed by a blanket of fog that’s thoroughly socked in the area around Table Rock State Park.

There’s no word yet on when the anglers will be cleared to go. It depends on when this fog lifts or the sun pops up and burns it off. An FLW staff member far up the lake reports that there’s no fog up there, where he’s waiting for some of yesterday’s top performers to arrive. But down on the lower end, it’s too dangerous to send ’em, so tournament director Ron Lappin said to grab another cup of coffee and hang tight.

The fog is the result of a drop in temperature in the wake of a minor cold front that swept through the area. The air temperature this morning is some 10 degrees lower than at yesterday’s takeoff. Generally, these Ozark bass prefer cold weather, but post-frontal conditions are never easy.

Today’s forecast high is 73 degrees, which is about the same as yesterday. Expect a challenging scenario for competitors who are angling for a shot at the top 10 and a shot at the Forrest Wood Cup.

As always during major FLW tournaments, you can follow along live via the FLW On-the-Water Twitter feed by clicking here and scrolling to the bottom of the page.

A day with Jeremy Lawyer

A day with Bryant Smith