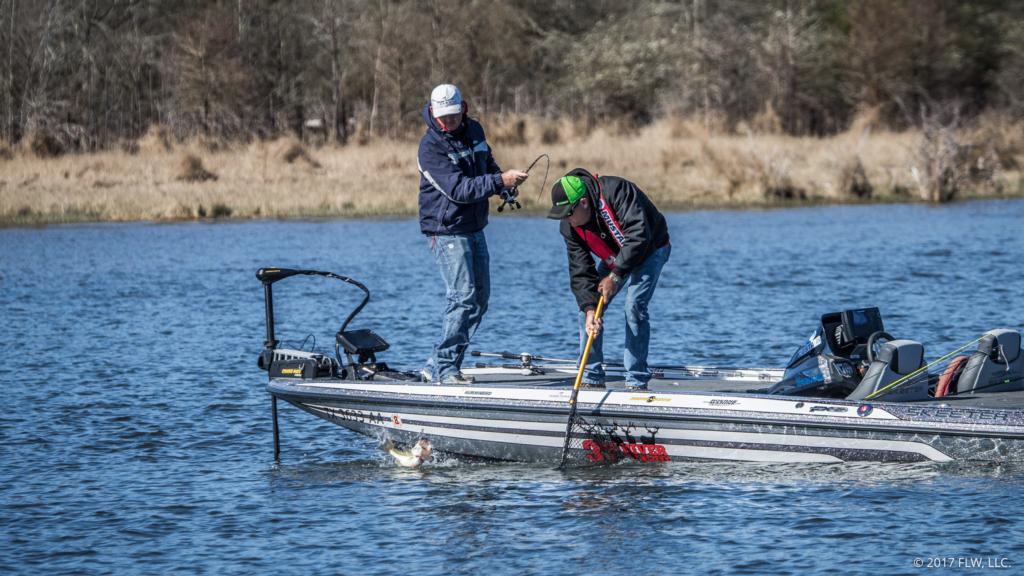 The Costa FLW Series presented by YETI on Sam Rayburn Reservoir showed anglers that despite a water level of 2-3 feet below normal pool, this East Texas gem remains one of the region’s top lakes for, both quality and quantity. However, shifting weather threw a day-three curve ball that left many scrambling to find consistency.

A cold front that arrived the late afternoon of day two dropped air temperatures about 17 degrees and shaved about 8 degrees off the water temperature. This rattled some cages, in terms of fish positioning and temperament.

Texas stick Todd Castledine got off to a great start, maintained his momentum and powered across the finish line with the biggest catch of day three and the tournament’s second-largest — 27 pounds. Notably, Castledine owes his final-round heroics to a key afternoon decision that yielded a kicker of 9-plus and cemented his tournament total of 66-11. 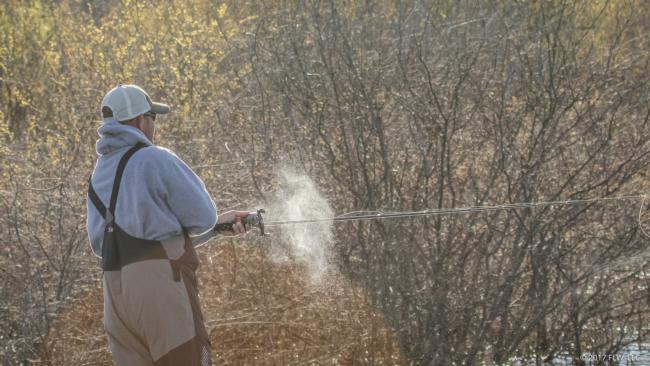 The tournament’s most consistent competitor, Jason Bonds opened with a strong day one limit of 26-8 — the event’s third-heaviest catch, good for second place. The Lufkin, Texas pro would take over the day-two lead when he added another 18-8 before settling in second on day three with an 18-pound bag that gave him a three-day total of 63 pounds even.

Bonds amassed his weight with a combination of prespawn, postspawn and spawning bass. His main area in the back of Buck Creek presented the ideal scenario for encountering fish that were coming and going. There, he fished open water with hydrilla and scattered buck bush, as well as narrow drains within the shoreline brush for staging prespawn bass and those leaving beds.

When he targeted bedding bass, his habitat selections varied from pockets within the brush, to stands of golden brown hay grass. Exact positioning in the bed was often critical, so Bonds invested significant effort to find the sweet spot that turned irritation into aggression.

For his sight fishing, Bonds relied on a Strike King Rage Bug in the blue craw color. He Texas-rigged this bait on a 5/0 Gamakatsu SuperLine hook with a 3/8-ounce Strike King Tour Grade Tungsten Weight. When he covered water with long casts, he threw a Strike King Popping Perch in the ghost gill color. 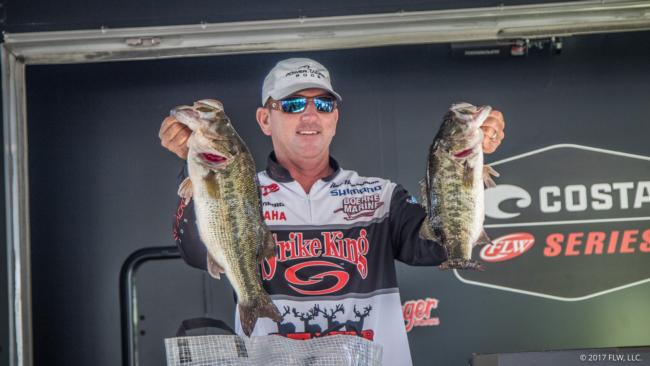 One of only three competitors to weigh over 20 pounds two days (also Castledine and seventh-place Jeff Reynolds), Ray Hanselman made a big move on the final day. Entering day three in eighth place, he sacked up 20-2, which combined with his previous scores of 18-12 and 21-12 to earn him the third-place finish with 60-10.

Although he fished shallow grass in commonly-known areas, Hanselman said his tactics gave him a competitive edge. He says he caught his fish on 4.75- and 5.75-inch Strike King Rage Swimmers with either 1/8- or 1/4-ounce belly-weighted hooks, depending on depth.

“With a LakeMaster chip in my Humminbird electronics, I can set color shades to the depths at the edge of the grass and I turn off my sonar so I stay quiet when I’m fishing,” he says. “I used quiet baits and there were people all around me, but my co-anglers and I were catching fish.”

A couple of elements that Hanselman termed essential to his success were his Costa Rx sunglasses that allowed him to clearly view the target areas and the lighter-than-usual 15-pound fluorocarbon line, which allowed his baits a little extra wobble. 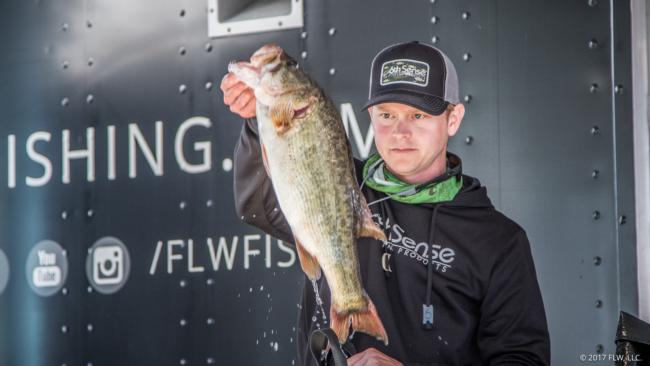 4. Sobczak cranks his way to fourth

Texas pro Casey Sobczak, owner of 6th Sense Lure Co., got a lot of mileage out of his products this week, with a start-to-finish cranking commitment that landed him in fourth place with a tournament total of 58-15.

After weighing 16-12 on day one, Sobczak reached the final round by turning in the heaviest bag of day two — 25-7. Mirroring his first day’s weight on day three, Sobczak ended in fourth place with a total of 58-15.

“I started out deep cranking and then I’d go shallow cranking in the afternoon,” he says. “I caught one bedding fish all week.”

Sobczak caught his deep fish on a 6th Sense Cloud 9 C-15 and a C-25, while he used a 6th Sense Movement 80 for the shallow fish. He surmises he was catching a mix of prespawn and spawning fish in the shallows. 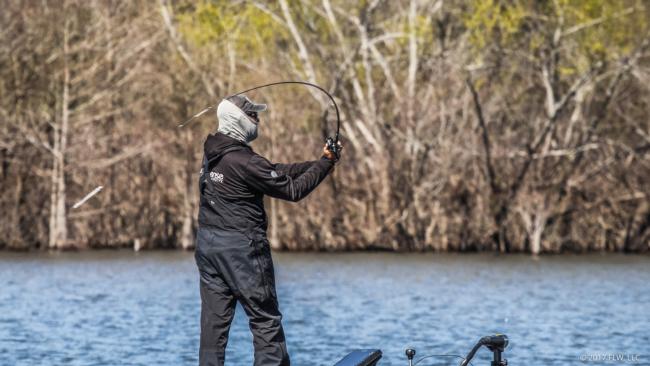 5. Wilson winds up with fifth

On day one, when Kris Wilson found all of his staging fish had moved up, he went to work sight-fishing and sacked up 23 pounds for fifth place. The next day saw less bed-fishing opportunity, so he shifted gears, fished offshore with 6th Sense deep diving crankbaits and caught 17-12.

Starting the final day in seventh place, Wilson couldn’t get the bed fish going and the morning’s stiff winds made the offshore deal less efficient. This steered him to some of his favorite protected areas in The Canyons, north of the 147 Bridge. Here he threw Big Bite Baits swimbaits all day and targeted grass off the edges of brush. 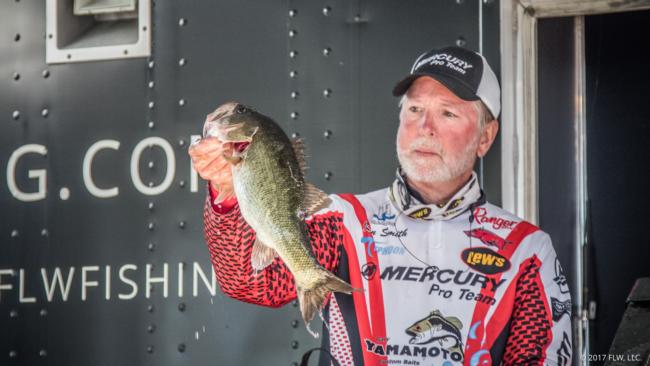 Dallas pro Ken Smith reached the top-10 on the strength of a stellar day-two bag that weighed 25-1. The day prior, he caught 15-14 and in the final round, he posted 15-2 for a three-day total of 56-1. Forgoing the potential for bed fish bites, Smith focused on drains where staging fish like to congregate.

“I’m not a sight fisherman; I don’t have the patience for it, so I tried to catch prespawn fish,” he says. “I threw a 3/4-ounce Rat-L-Trap and an umbrella rig all week.”

His tactics yielded quality bites on days one and two, but the third day saw no such fortune. 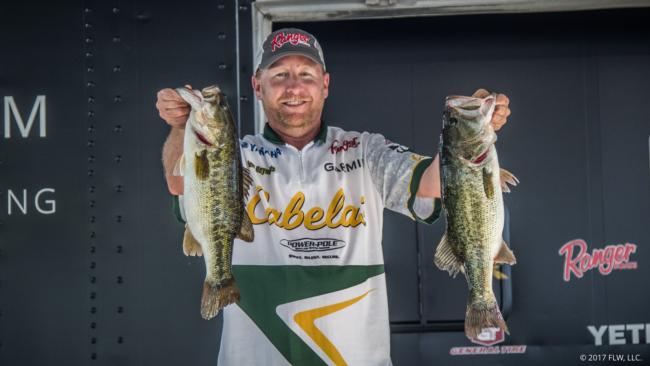 7. Reynolds runs out of fish

Jeff Reynolds swung for the fences and although he came up short, he knows he went out fighting. Bed fishing yielded two strong limits of 21-4 and 20-9, which sent him into day three in fourth place. Limited to 10-15 on day three, he dropped to seventh with 52-12.

“When you have the chance to win a tournament, you don’t want to leave anything out there,” he says. “I kept telling myself that the big ones would move up today, but they never did.”

Reynolds alternated between a 5/16-ounce Santone Swim jig with a Strike King Rage Craw trailer and a Reaction Innovations Sweet Beaver Texas-rigged on a 3/0 Trokar flipping hook and a 3/16-ounce weight. 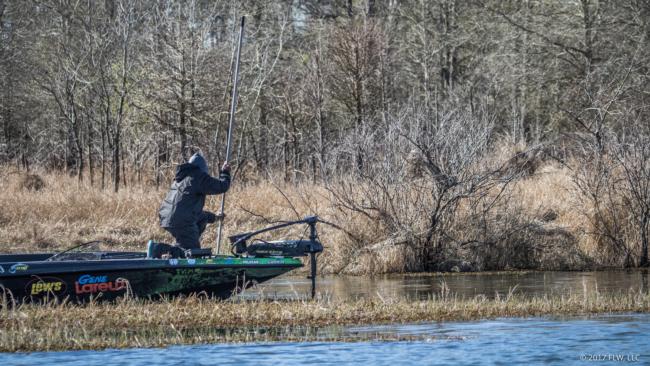 It was a good plan, but Andrew Upshaw’s vision of saving his prespawn Rat-L-Trap fish for the final day likely fell victim to the day’s drastic weather change. Devoting his first two days to sight-fishing with a Gene Larew Biffle Bug, Upshaw caught the tournament’s heaviest bag (27-1) to lead day one and slipped to second on day two after catching 15-7. 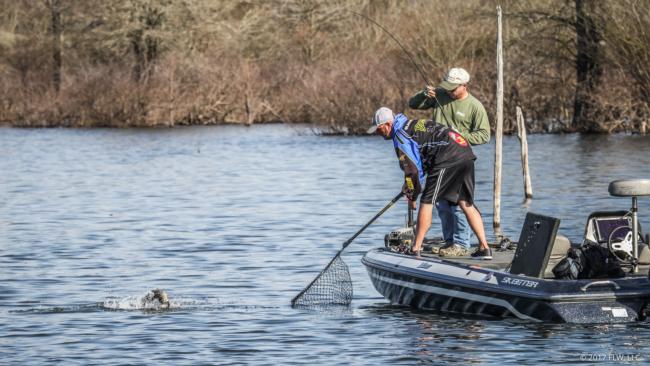 Hailing from Lafayette, Louisiana, Billy Billeaud got things rolling with a strong day-one performance that landed him in fourth place with 23-15. He tailed off from there and finished with a total of 51-12.

Billeaud says he caught all of his fish on a white vibrating jig — a decision whose inspiration came from his day-one co-angler. Initially, he tried to catch fish in the brush, as he did in practice. But after watching his partner catch several good ones on a jerkbait, Billeaud switched to the vibrating jig and stuck with it the rest of the tournament.

For the first two days, Billeaud fished pockets on the south side of the 147 Bridge, but the day-three leanness compelled him to look as far as the 103 Bridge across the Angelina River arm. 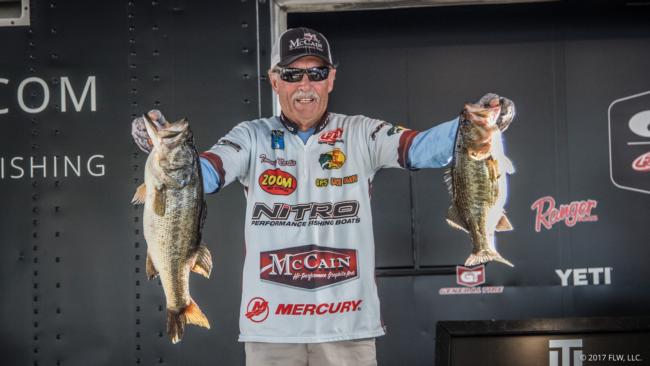 10. Martin struggles in final round

After a day-one catch of 16 pounds, Texas legend Tommy Martin roared back with a huge day-two limit that weighed 25-2 and moved him up to fifth place. Expanding on his primary areas and locating a couple large groups of fish in various stages of the spawn was the game-changer that gave him the boost he needed.

Unfortunately, those fish moved with the day-three weather change and Martin managed only 9-13 for a tenth-place finish with 50-15. Martin says he caught his fish by alternating between a swim jig and a vibrating jig.

“I found two areas that really had a lot of quality fish in them and I probably spent too much time in those two areas today because I had so much confidence in them,” Martin says. “I’m a firm believer that when they’re biting, get what you can and hope there’s a few for the next day.”