Duvall in Command on Seminole 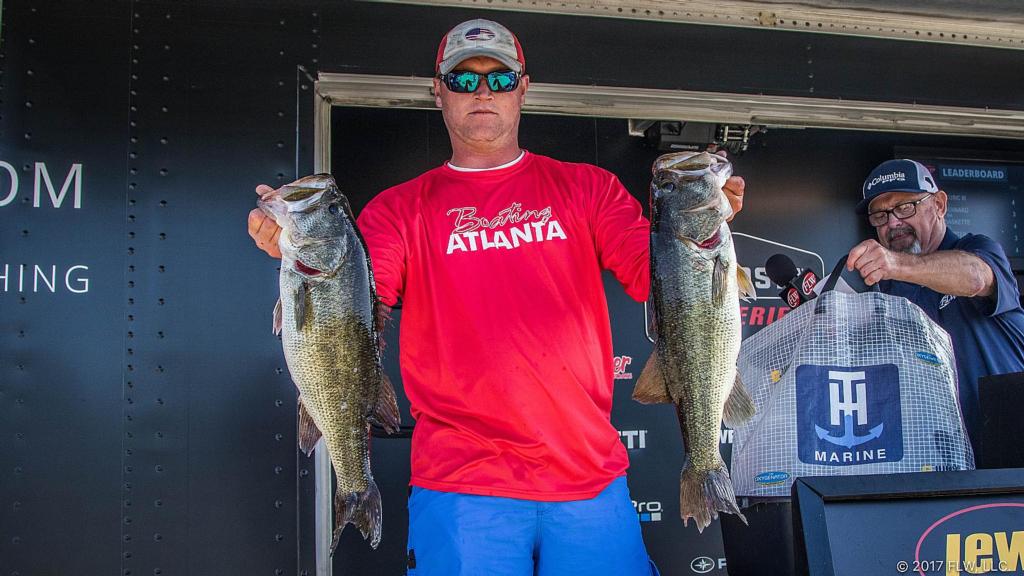 That was the popular phrase of day one at the Costa FLW Series Southeastern event on Lake Seminole presented by Mud Hole Custom Tackle and hosted by the Bainbridge Convention & Visitors Bureau.

After pros grew used to warming temperatures, southerly winds, shorts and flip flops during the practice period, Mother Nature pulled the 180 on them on the first day of the tournament blasting them with blustery cool north winds, which in turn “wiped out” many of Seminole’s best shallow bedding flats.

Many pros lamented losing their best areas to “two-foot rollers” which trashed their productive spots.

John Duvall of Madison, Ga., however, had no productive spots to lose, and that might help explain why he is now leading the Costa Series event with a five-bass limit weighing 25 pounds, even.

In fact, Duvall had such a terrible practice, he just went practicing again today and stumbled upon a mother lode of Lake Seminole bass.

“I only had two little old bites in practice, that was it,” Duvall says. “So I didn’t need to go check any of my good spots to see how bad the wind trashed them because I never had any good spots. I just went fishing on some places I’ve caught them on in the past here and got really blessed. When I caught my first keeper I was like a kid in a candy store – I knew I was at least going to be able to weigh something in.”

As his day unfolded, Duvall certainly had something to weigh in and that something is 25 pounds on top of the leaderboard.

Duvall has history on Seminole, adding that he fishes on the South Georgia impoundment 8 to 10 times a year.

“I went to a place I caught them pretty good several years ago, put the trolling motor down and started fishing reaction baits,” he says. “With each fish, I was in disbelief. In all of practice I didn’t have anything close to that.”

Duvall says he basically has two spots that are very similar in nature – funnel spots where bass are trafficking through en route to spawn. During the day he bounced back and forth between the two spots, catching about 15 keepers total.

“These spots are between their staging areas and their spawning areas,” Duvall explains. “I can see where they are coming from and where they want to go – I’m fishing right dead between the two. Some of it is sand and some of it is clay with some pads and grass mixed in.

“I have no idea what’s going to happen tomorrow, but I’m feeling a whole lot better now than I was in practice. I just need them to keep funneling through there for two more days.” 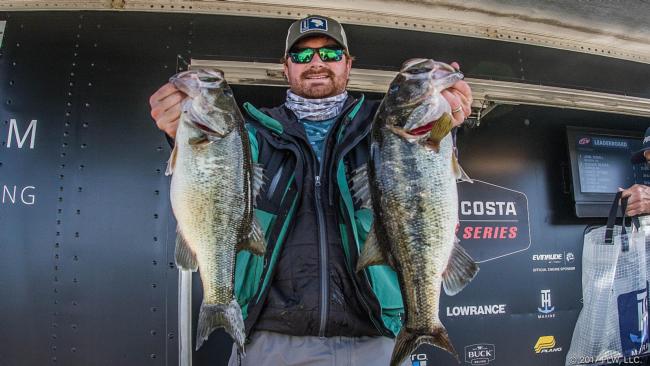 Seth Cannon of Brooklet, Ga., leads the Co-angler Division with 15 pounds, 4 ounces. Cannon fished with pro Trent Hill who led him to his leading catch. Cannon’s big bass was a 5-pound, 13-ounce lunker that fell for a lipless crankbait.

“I just got fortunate and drew a great pro who was on fish and had me around them all day,” Cannon says. “Trent fishes out here a lot and knows what’s going on. When you draw a guy like it in these tournaments, it a huge help.”