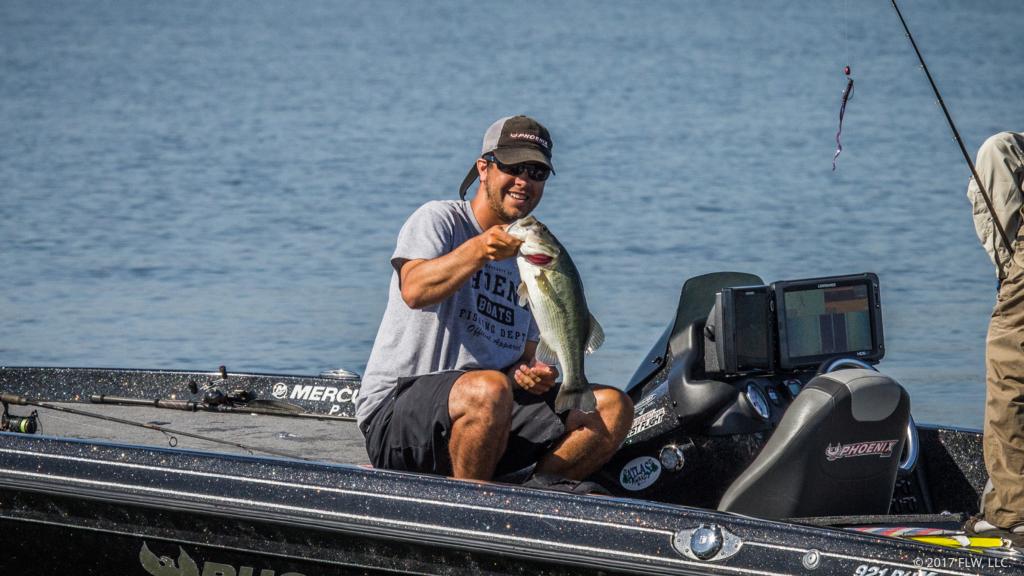 Kentucky Lake stick Jason Lambert caught a limit of 24 pounds today and held onto his lead at the Costa FLW Series Central Division event presented by Lowrance on Kentucky and Barkley lakes.

The loss of his trolling motor battery severely hindered the Tennessee pro, but Lambert improvised and salvaged his day by maintaining his position, if only by a 2-ounce lead. 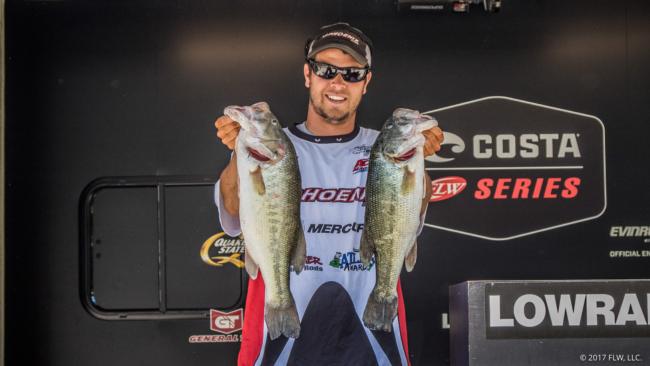 The super-consistent pro from Leesburg, Ohio, posted 24-7 on day one and backed it up with 24-9 on day two to hold at second with 49 pounds overall. After making a long run south, Floyd graphed two spots, found a tight school on his second stop and proceeded to blast a 20-pound limit in seven casts.

“That’s how it’s supposed to work, for sure,” Floyd says. “That spot was the point of a shallow bar, and the fish just get up there and feed. They’ve been there for about a week, and I don’t think anyone knows about them. That was one of my best places. Hopefully I can get on them tomorrow and do the same thing.”

Around 8:40, Floyd moved three miles south to a main-river ledge where he improved his limit with a 5 1/2-pounder. As the morning lull set in, he switched from a big crankbait to a drop-shot and picked up another cull fish.

As far as technique, Floyd says scanning his spots before committing saves him a lot of valuable fishing time. The first spot he fished showed the tight clustering of bass looking for breakfast.

“I have to see them before I fish,” he says. “When I jumped up on that first spot, I knew they were going to eat from the way they were setting up.

“Most guys use DownScan, but I go off side-imaging to tell. They were all bunched up. When they’re that close together, they’re going to compete for food.” 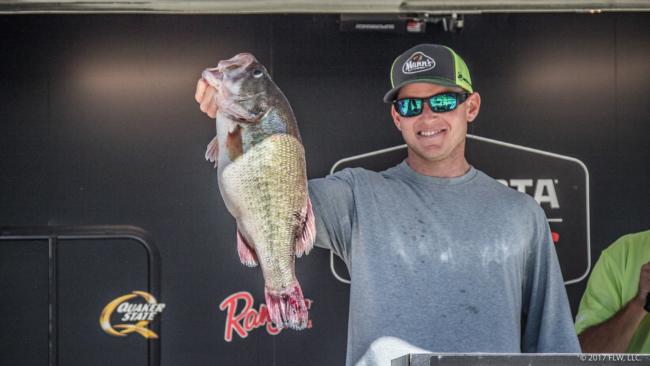 “A fish like that makes a big difference,” Frazier says. “The school I caught them out of yesterday, I went there first and graphed around forever, and I thought they’d left. So I ran five or six other schools and then came back because I had three little 2-pounders. I graphed over the little spot where they had been sitting, and they were there.

“I got lined up, and on the first cast I caught that 8-pounder. I caught two 5-pounders right after that 8, so it happened pretty quickly. I culled a couple of times later, but my four biggest ones came off that one school.”

Frazier caught his fish on a mix of reaction baits and dragging baits. 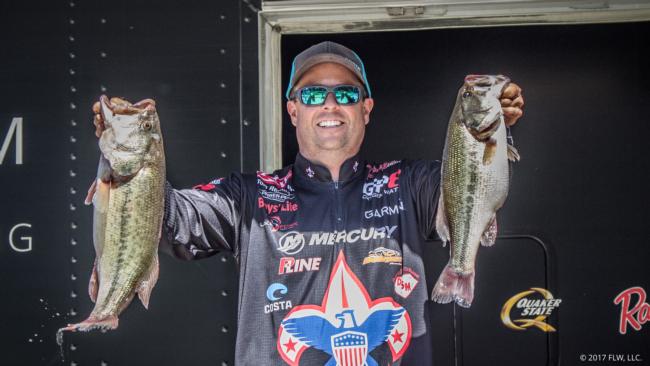 Tom Redington says the day-two quantity was good, but the quality just wasn’t what he needed. Yesterday, he caught 24-7 and tied with Floyd for second, but day two yielded a lesser limit of 20-11.

“I had probably the same number of fish caught today, but my bottom fish yesterday was 4 pounds. Today I went through so many 3 1/2- to 3 3/4-pound fish,” he says. “If I had two 4-pounders today, it would have been a different day.

“The biggest difference today was that the current wasn’t rolling that much, but also, there wasn’t much wind. I tell guys, ‘You curse the wind, but you curse it more when it stops.’ When it gets totally slick, they just don’t react to those baits.”

Redington caught some of this fish on reaction baits, but ultimately resorted to dragging worms and fishing drop-shots. 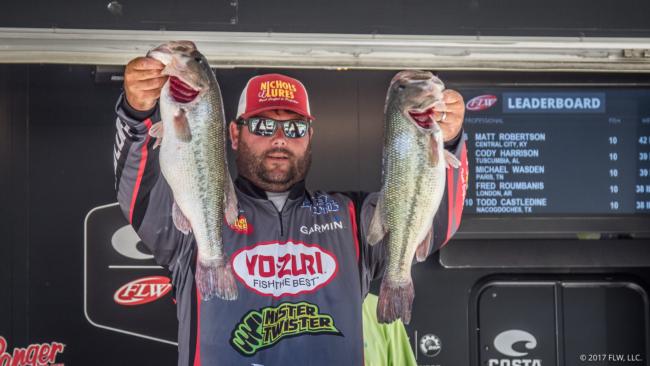 Clent Davis added 23 pounds to his 21-9 from day one and moved from 11th place into fifth with 44-9 overall. Not a bad showing, but not up to the Alabama pro’s expectations.

“I had more weight today, but both days have been terrible compared to what I’m used to in years past up here,” Davis says. “Everybody knows where everything is now, so you have to move around until you get ’em.”

Davis describes his day as mostly boring – an opening flurry and a brief afternoon bite separated by several hours of tedious graphing for something else to fish. Several of his intended spots had boats on them, and schools he had found in practice were gone.

Davis caught his early fish on reaction baits but had to resort to dragging a worm on spinning tackle for the late-day bites.