The Fall Report on Kentucky Lake

How things are setting up for the Costa FLW Series Championship 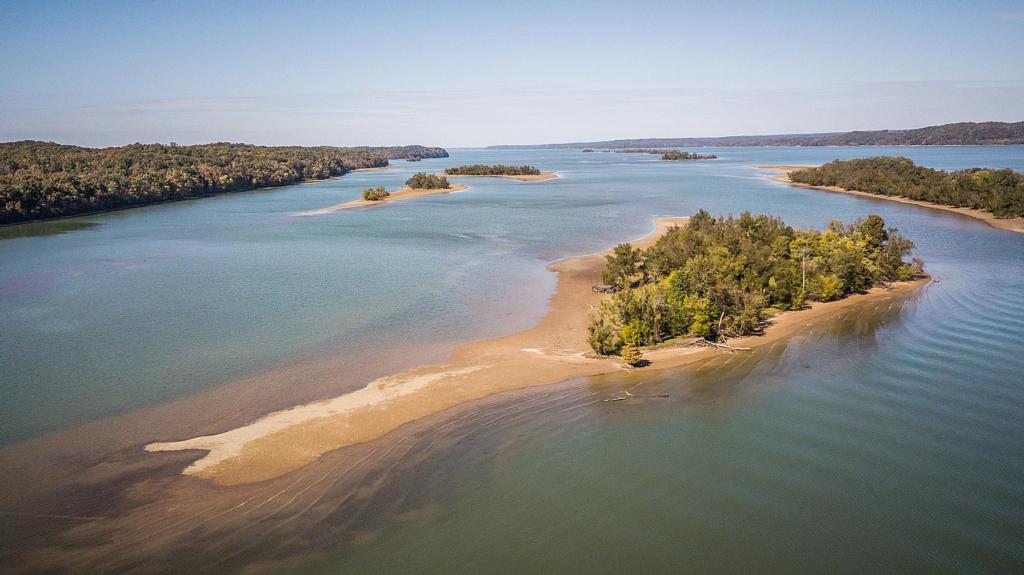 When the 2017 Costa FLW Series Championship kicks off Thursday on Kentucky Lake, the anglers will hit a lake that is somewhat in flux. After a brutal cold snap to start the week, with four consecutive nights of temperatures dropping down into the 30s, there is a lot more rain and warmth in the forecast for the tournament.

Weather isn’t the only factor in play, however. Kentucky Lake can be an intimidating lake at the best of times, but it’s a particularly tricky beast in the fall. Unlike the peak of the ledge-fishing season in June, there are multiple patterns in play in fall. Though the weights won’t equal summertime ledge tournaments, the fishing should still be quite good for those who figure it out in this week’s derby. 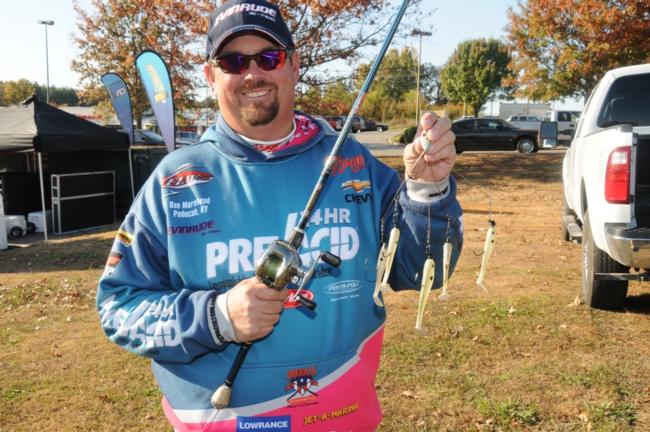 The last time the Costa FLW Series Championship was held on Kentucky Lake was about this time of year in 2011. Dan Morehead won it slinging an umbrella rig just days after Paul Elias blasted ’em with the rig in the FLW Tour Open on Lake Guntersville. Morehead and others in the top five eschewed the tried-and-true shallow bar game to target fish that were mostly a little deeper, keying on breaks and the like predominantly around the mouths of coves. Throwing a Heddon Spook on bars on the main river, Lendell Martin led the first two days, but dropped to third by the final day, weighing about 5 pounds less than Morehead overall.

Even with the injection of the umbrella rig, the weights weren’t incredible back in 2011. Morehead won with just a hair over 15 pounds per day, and only about one-third of the field limited each of the first two days.

Of course, those fish numbers are far better than what the lake kicked out in early October for the T-H Marine FLW Bass Fishing League (BFL) Regional. Marty Sisk won it with about a 17-pound average, but only three pros managed a limit all three days of the event. Unlike the 2011 championship, the recent Regional was utterly dominated by the shallow bar game, as was the BFL LBL Division Super Tournament in early September, when Cole Floyd averaged more than 20 pounds per day en route to a blowout win. 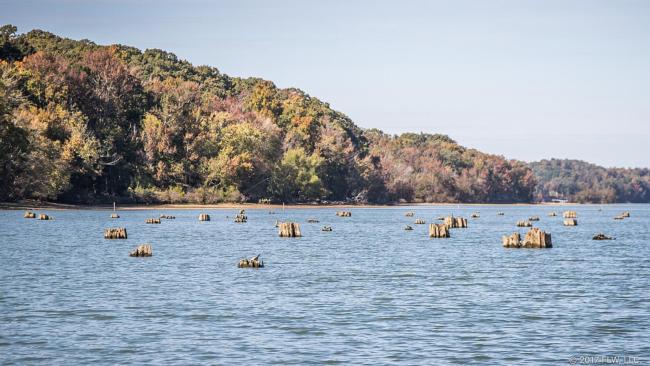 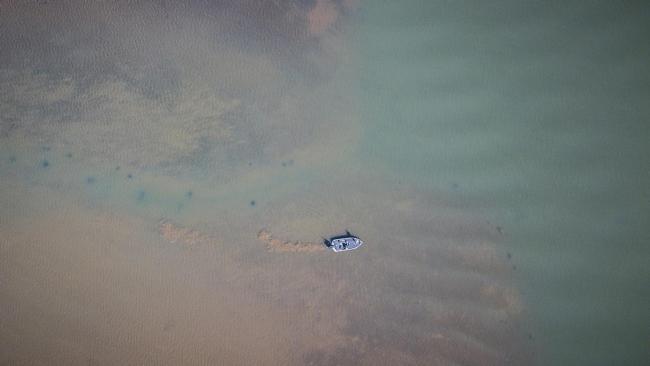 Watch the bars this time around

The talk in the run-up to this event has been all about the shallow bar game – fishing shallow river channel edges and other structure on the main lake with topwater. And it’s with good reason, according to Brent Anderson, who guides on Kentucky Lake, finished second in the BFL Regional and has a stellar record in the fall on Kentucky Lake.

“In a way I’m not a good person to ask about this because I live and die with that topwater until you can’t do it anymore. But I still don’t think there’s no other way to win,” says Anderson. “It was a lot colder in 2011, and the A-rig was fresh; they hadn’t seen it. Danny Morehead won that, and he pre-practiced with a good buddy of mine, and they caught like 27 pounds on a Spook. That water needs to be in the low 50s for the A-rig bite to really kick in. If it’s around 60 it’s a topwater deal. I went three days last week, and it was pretty easy, and you could catch some big ones, too.”

Though the water dipped into the 50s at the beginning of practice, it’s back into the low 60s now, and should stay there throughout the event. Conditions could be setting up perfectly for the shallow bars to show out.

Even so, Anderson says the bite isn’t as reliable as it was a few years ago. Back then, he could return to places on a bar and fish for stationary schools of bass, something that’s nearly impossible now.

“They’re in packs, and they’re swimming,” says Anderson. “You may have to fish a football field area, and you’ll run into them and catch two, and then you have to find them again. It used to be easy, but now you may go two hours without a bite and then catch 19 pounds.” 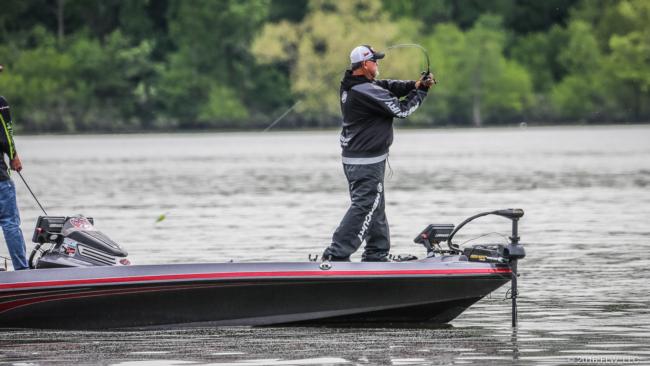 If the bars don’t produce

Though Anderson is about as sure as can be about the bar bite, there are no guarantees in fishing. With four days of practice, you’ve got to believe Randy Haynes spent a day scanning out deep, and Ron Nelson and Marcus Sykora both say they’ve found some dandies out deep.

“I like having a school of 2-pounders deep, but a lot of times I can’t find that,” says Anderson of the fall bite. “I had one school of 2-pounders going into that Regional, and I spent a whole day looking. It’s bait related this time of year. The ones I found before the Regional were in a creek, but they were on a place I’ve never seen them before. I went in there and looked at the three sweet spots in the creek and saw nothing, and on the way out I saw three seagulls. I went and scanned where they were, and there was a school of bass sitting there.”

Anderson says he stopped by that spot about a week ago to test it and caught a 4-pounder and a 5-pounder in his first few casts, but he’s still not convinced of the offshore bite’s reliability. One thing he does expect to hold true is the typical location of deeper schools. Instead of on the main channel, he says most of the late-season schools are on creek channels. 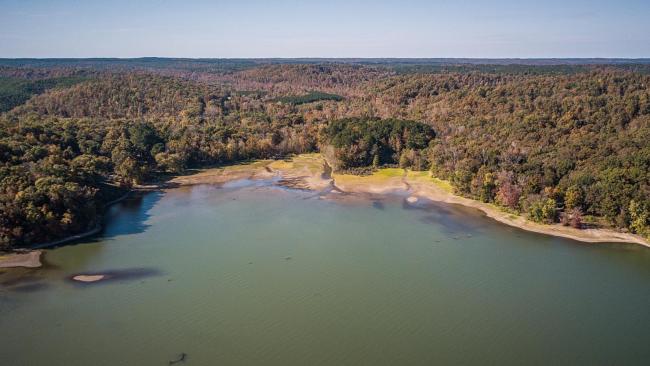 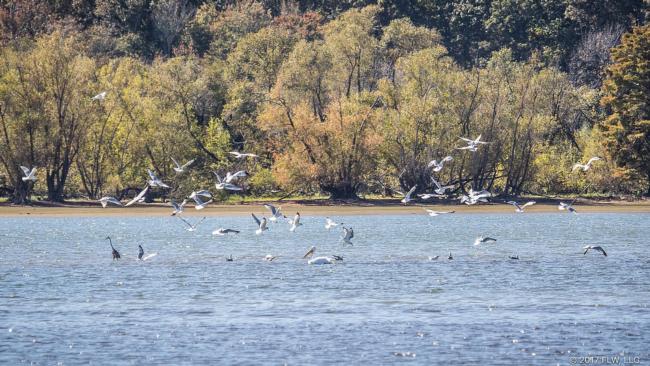 Outside of the cool snap, Kentucky Lake looks fairly typical for the fall. The Tennessee Valley Authority begins to draw the lake down every September, and at 354 feet the lake is essentially at winter pool now. That means navigation is tricky if you don’t know where you’re going (or even if you do), and that vast chunks of the lake that you could burn over with impunity in summer now require idling or very precise running.

One factor to keep an eye on is the unusual lack of bait in the creeks. Typically, balls of threadfin shad push into the backs this time of year, and for whatever reason there are very few to be seen. Back in 2011 and 2012 the lake was full of bait to an extraordinary degree, and there might be a bit more of a premium on spots with bait now.

It’s also worth watching the rain, at least to an extent. It probably won’t rain enough to really muddy things up, but it might rain enough to keep the TVA pulling current. Though there aren’t enough fish on the main-lake ledges for a major ledge bite to be a huge consideration, more current is nearly always better than less on the Tennessee River. A dousing warm rain could make things interesting in the backs of the pockets or creeks as well. Warm, inflowing water is often a target for baitfish and bass. It wouldn’t be unheard of for someone to stumble on some feeding fish around some current under the right conditions.