How Russell Cecil burns up the hay for Texas bass 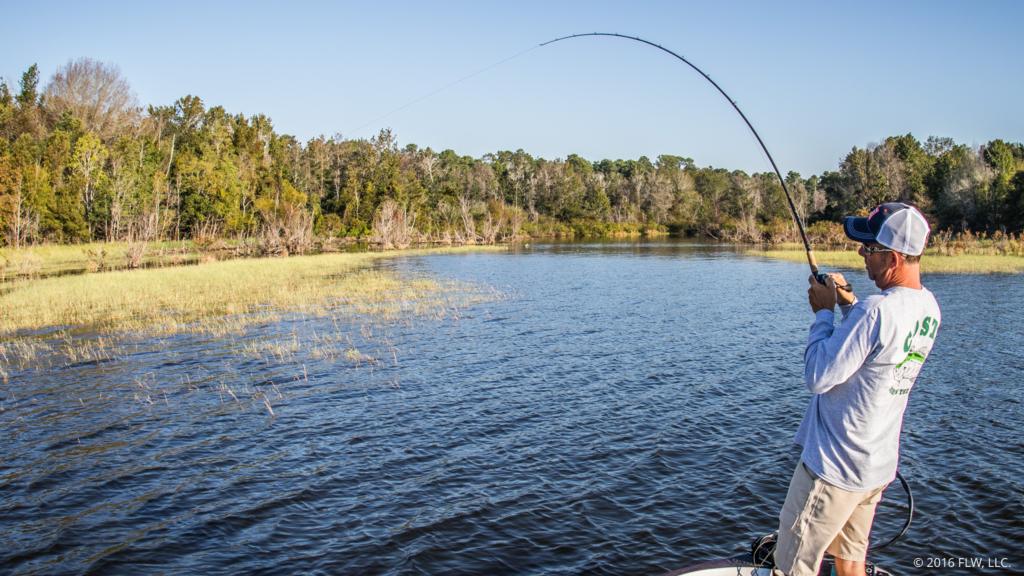 Fishing a frog is often a slow process. It can take awhile to properly pick apart a mat or grass bed, and sometimes the best speed for a frog bite is almost no speed at all. Russell Cecil turns that practice on its head when he fishes hay grass in Texas, burning a frog for big fish and numbers that other anglers never get to. 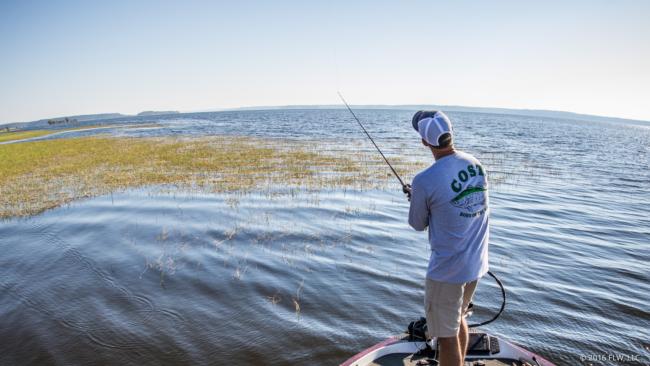 Texas lakes such as Sam Rayburn and Toledo Bend are rimmed with “hay grass,” which can grow in deep water during flood times, but is usually found in a few feet of water, either on shallow humps or simply along the shoreline. Hay grass in Texas is mostly invasive torpedograss (Panicum repens), a type of grass that can live equally comfortably on land or in the water.

Often there is a gap of sandy no man’s land between the grass and the bank, and the width of that band varies widely. Sometimes there will be a few pockets interspersed, and the blades of hay grass will only just reach the surface. Other times it will grow so thick as to be nearly impenetrable.

Cecil likes to target bass in the thickest and most difficult sections of the grass by straight-reeling a frog over and through the cover. It’s the pinnacle of power techniques, and it can get the job done in a big way when fish are present.

For Cecil, there are two times of the year when fishing hay grass really excels.

“The shad spawn can be really good, because the shad will use that hay to spawn, and the presence of bait is almost always important,” says Cecil. “The other time is the late summer and fall. When the bait makes the transition to the backs of the creeks and gets shallow in mass numbers, those fish will take advantage of that.”

Finding the right stretches of hay grass can be a challenge, but Cecil has a few ways to narrow it down. The biggest factor is actually an absence of hydrilla offshore nearby. Per Cecil, most of the time if there is good hydrilla near the hay grass, the bait and the bass will be in the hydrilla. A few years ago, when the water at Sam Rayburn was high or coming down, the bass stayed in the hay grass longer and in bigger bunches. With more hydrilla in the lake these days, the best stretches are more isolated. 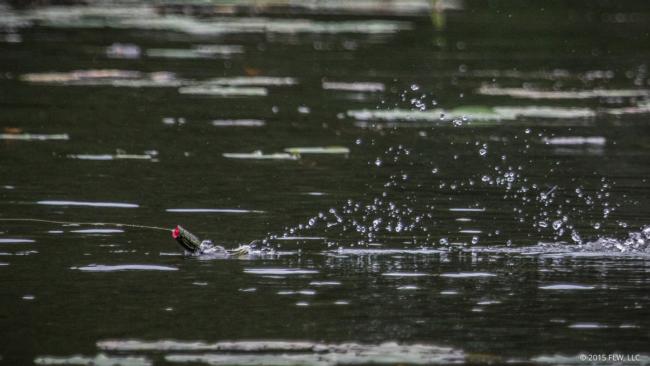 Most of the time, Cecil is simply reeling his frog straight back through and over the grass – oftentimes barely keeping it in the water.

“The way I fish the frog is based on the way the hay looks,” says Cecil. “Sometimes you have a hole that ends up being really good in the hay, and then you throw past it, try and get their attention in the hay, and then walk it or give it some action in the hole. In the mat, I think the most important thing about that is to get their attention and have a steady cadence where they can time it. You’ll get bites if you stop and start, but you’ll get a lot of misses. When you keep it moving, they’re getting a view of the commotion, and they can time when to break through the mat to get it.”

It’s somewhat astonishing to watch in person, but it works. You wouldn’t think a frog careening over and through the equivalent of an overgrown lawn would get bites, much less hookups, but it does. 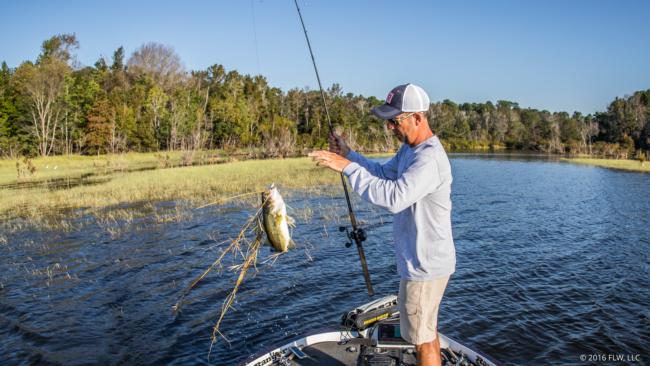 Once a fish bites, the challenge of getting it to the boat begins. To maximize his chances, Cecil uses specialized tackle and a deliberate hookset/landing strategy.

For his stick, Cecil uses a Falcon Cara Bobby’s Perfect Frog Rod, a 7-11 monster designed by Bobby Barrack that features a ton of backbone and a fairly slow action. The backbone is key for driving a hook on long casts, but the slow action is probably the most important part. Reeling with the rod tip up, Cecil likes to let the bass load up on the frog before he drives the hooks home. Once he hooks a fish, a big parabolic bend is key for keeping the bass pegged if it bogs down in the cover and he has to go in after it. It’s easy for a moment of slack with braided line to translate to a lost fish, and the parabolic blank helps to minimize the problem.

“You can get away with 50-pound braid from a strength standpoint,” says Cecil. “But that bigger braid floats the frog better. That bigger braid is actually an advantage, because you don’t want it to get down in the grass much at all.”

The Texas pro packs as much line as he can into a big high-speed reel with a good drag and a big spool. His preference is either a Shimano Curado 300 or a Lew’s Super Duty Wide Spool. Both models have extra-large handles for more cranking power and hold a lot of line so his mechanical advantage still holds at the end of a max cast.

For frogs, Cecil will take about any color of the SPRO Bronzeye Frog 65 or the Strike King Popping Perch. His one color preference is during the shad spawn, when he likes a white one to better imitate the predominate forage.

The technique, while unconventional for fishing a hollow frog, shows how versatile the bait type is, and is an effective means of covering large swaths of shallow cover when bass are buried deep within.