How to punch the deep stuff for big ones 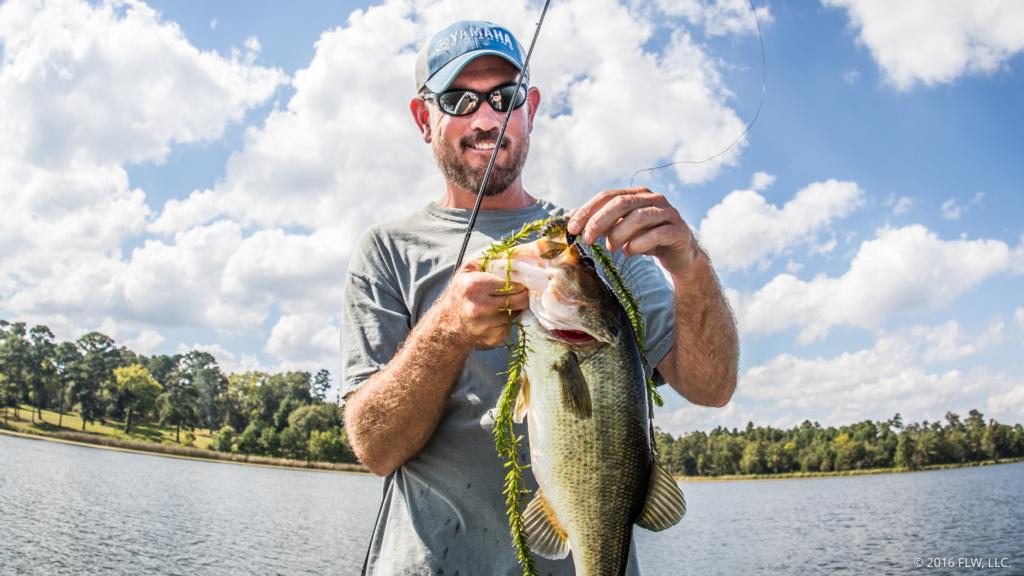 Flipping a big weight in grass isn’t at all uncommon. After all, grass holds bass from Canada to Florida. If the fish are there, anglers are quick to catch on. Down in Texas in the early ’90s, “dropping” in deep hydrilla began to take hold as big weights allowed anglers to reach down into 10 or 20 feet of water for unpressured grass bass, with sometimes amazing results. The equipment is miles better now than it used to be, and the bass are a little wiser, but going after them nearly vertically in truly deep grass is still a great way to target tournament-winning bass. FLW Tour pro Clark Reehm has grown up fishing in Texas and guiding/teaching on Sam Rayburn. He’s winched up more than his share of bigguns from the grass. What follows is his prescription for successfully flipping deep grass. 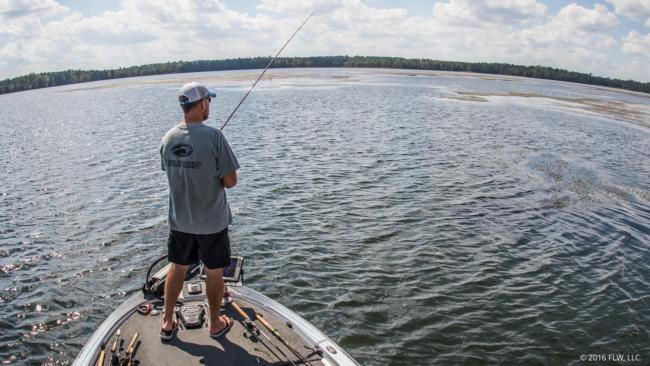 Live on the edge

The toughest part of hauling in bass from deep grass beds is locating the fish in the first place. Reehm almost always focuses on isolated clumps or the edges of the grass, almost following the contours of points, ditches and drains like you would if there wasn’t any grass at all.

“You need to figure out what depth the outside edge is,” says Reehm. “Typically up north they aren’t flipping grass that is out in 20 feet. A lot of times, we’re looking for deep grass-line edges or edges close to deep water [in Texas]. If I can find where the river channel comes up close to a main-lake flat that is good. Or, you’re looking for those subtleties in the grass where a ditch runs through, because those are the highways they’re gonna use.”

There’s a lot of grass offshore, and keying on the edges and differences helps to eliminate some of it right off the bat. To really home in on good starting points, Reehm relies heavily on technology.

“More than anything I use a lot of the satellite imagery,” reveals the Texas pro, who says he would carry a drone on Tour if it was allowed. “Looking at images of where historical grass lines are helps me to understand where the edges are actually at or to pick out nuances in the grass. StructureScan also helps. I can go out where you can’t see the grass and graph down a line of grass and lay out waypoints and manually build a map of that line. Then you can get on top of it and flip down along it where you can see that hard edge.”

Even once you find a deep grass line on StructureScan, you still need to fish it accurately. Reehm says that many old-timers still prefer a flasher for telling the difference between where grass is and isn’t, but a Lowrance does the job for him.

Edges aren’t the only key areas, however. Reehm also looks for smaller, isolated clumps of grass away from the primary grass line. Often, those clumps are the least pressured, and they can hold a surprising number of easy fish.

“Flipping grass is easy whenever you have a visible line that comes up to the surface. Anybody can do it,” says Reehm. “Offshore, that’s where using your electronics is critical to being able to figure out where that grass actually is. Sometimes the grass might not be 4 or 5 feet tall off the bottom and still have 10 feet of water over it.” 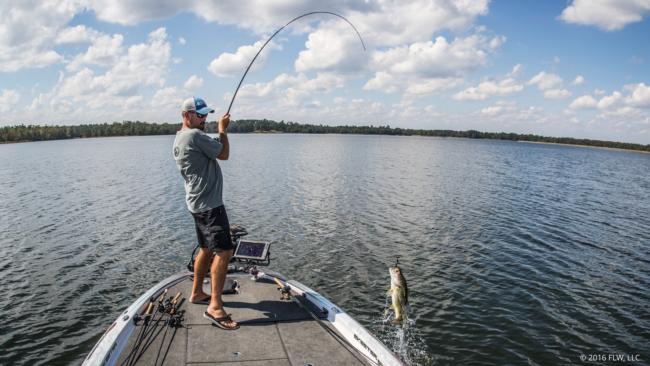 Finding and fishing the right grass is the first step, but you’ve still got to pick it apart efficiently and be able to get them in the boat once you find them.

“When you’re flipping deep hydrilla it’s about like making a cast,” explains Reehm. “When you think in a three-dimensional sense, if you flip a jig or a worm out 10 feet from the boat and it goes straight down to the bottom you have 20 or 25 feet of line out. When you set the hook on a fish in a hyacinth mat you have about a foot of cover to jerk that fish through. When you set the hook on a fish in deep hydrilla you might have grass growing all the way up to the top. You really need to get them coming up, and a lot of times you have to pull up a monster ball of grass with them.”

Early on, anglers hauled bass up out of deep grass with 25-pound-test monofilament and the stiffest rods imaginable, but life has gotten better since then.

Most deep flippers still rely on very heavy tackle, however, just going with a broomstick will wear you out after a day of fishing. It takes a lot of presentations and a lot of reeling to properly cover a grass edge you can’t see with your eyes.

Reehm typically fishes with 65- or 80-pound-test braided line and a 7:1 or 8:1 gear ratio reel. For his rod, Reehm’s choice is either a Dobyns Champion Extreme HP 795Flip or a Champion XP 766Flip. Both rods are light and stout and long enough, but not so long that Reehm can’t handle them comfortably. If you’re a little bigger, it might make sense to pick up a longer, more traditional 8-foot mat-flipping rod.

For baits, the Oldham Eye-Max Jig is the Texas staple for dropping in deep grass, but it isn’t the only bait that will get the job done. Per Reehm, the Strike King Hack Attack and the Santone Big Pig Grass Jig are both capable alternatives. The key to a good grass jig is a large and not perfectly streamlined head. That way the bait “pinballs” down through the grass and creates extra action on the way down. Reehm suggests tipping jigs with a craw worm, a Zoom Super Chunk or a Reaction Innovations Sweet Beaver. He also likes to flip a Texas rig with a skirt. Because it’s a bit more streamlined than a jig, the Texas rig is a more efficient presentation. Reehm usually goes with a 1 1/4-ounce Elite Tungsten weight and either a Beaver or a aZoom Z Craw.

Reehm doesn’t worry too much about color. Black and blue or something green usually gets the call, but he believes that figuring out the ideal action and profile is more important. Sometimes the best bait will have kicking feet, and other times you want more of a glide. Occasionally, you want the extra-large package a jig provides. Yet, sometimes the fish will lean more toward the smaller Texas rig. 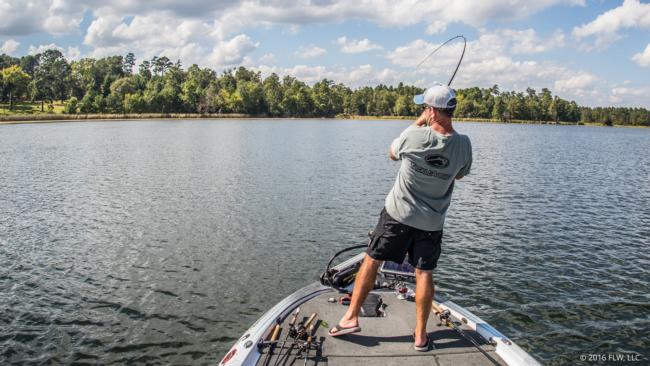 The actual mechanics of getting bit are pretty simple. You’re largely just pitching a bait out, letting it free-spool down through the grass and then bringing it back up. Reehm will often hop his bait a time or two once it gets to the bottom, but the name of the game is making a lot of pitches. The bass usually won’t move far to eat, so you need to saturate the edge.

“Typically your strike zone is one of two places,” says Reehm. “Either they’ll be sitting on the bottom and you have to hit them on the head, or they’ll be suspended right under the edge and they’ll eat it on the drop. By constantly pitching your bait out, you’ll get the feel for how long it takes to get to the bottom. If it stops too early you better get on ’em.”

Usually there is too much grass to effectively mark fish on sonar, but homing in on them is possible in some situations.

“One thing you can see is if there are fish on top of the grass,” relays Reehm. “If you’re flipping hydrilla that’s not visible, you can see them on top, and then you might have an opportunity to catch one on the initial fall. But typically, in that situation, I’ll have them hit it or chase it up as I’m reeling it back up.”

One thing to be ready for is a brief flurry of incredible action.

“When you find a wad of fish it’s called a ‘scrape.’ That’s what you’re looking for,” says Reehm. “When you pitch it in there, a lot of times there can be multiple fish in one hole. You might pitch out there, boat-flip an 8-pounder and have another rod rigged. In a matter of two or three minutes you have a limit of fish. It’s like a ledge, where you had a group of fish in one little area and you fired them up.”

Coming upon a scrape can be epic, but even if you don’t fill a limit, you should be ready to catch followers. Oftentimes a bass or two will follow a hooked fish up, and when that happens they are ready to eat. In a team tournament, your partner is often better off making a flip instead of going for the net.

As long as grass is growing out deep, you can flip some bass out of it. But, there are definitely times when the flipping bite will be overshadowed by other patterns.

“As soon as those fish go postspawn, they start getting in those grass mats,” says Reehm. “You have to think of the life cycle of the grass. It doesn’t start growing up good until about May. Then in the fall and winter, as long as that grass is alive, you’ll still have an opportunity to catch fish. You can still catch quality in the grass in the winter. You just might not get the numbers.”

The quantity of bass in the deep grass is based a lot on the availability of forage. In the spring, when lots of shad are still spawning shallow, you’re not likely to see big numbers in deep grass. Similarly, come winter, bass usually start to chase shad more and leave their summer diets of bluegills and crawfish in the grass behind. 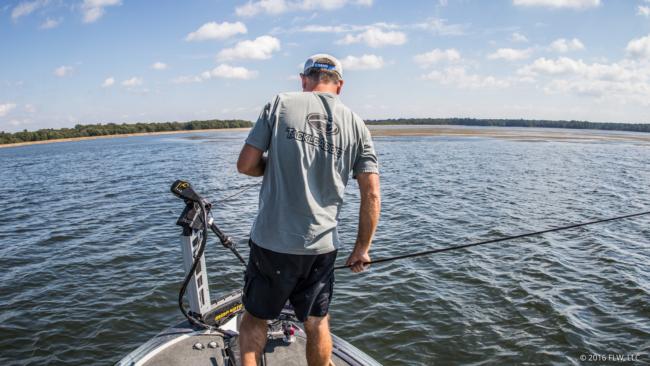 On Texas lakes such as Amistad, Toledo Bend and Sam Rayburn, flipping deep grass is an essential tournament tactic. Anglers run it in large part because it holds more potential for big, tournament-caliber bass than most other techniques. With that knowledge comes danger. Flipping deep grass can be great in practice and then fall apart come derby day.

“In practice, to effectively use that technique, you need to shake off whatever bites you get,” says Reehm. “You can go back and catch those fish that you shook off. They’re not going anywhere because they have a food source there.”

Because fish in the grass key so much on bluegills and crawfish, they tend to be relatively stable. Punching in a waypoint where you get a few bites can lead you back to the fish in the tournament. On the other hand, catching five or six fish out of a pressured grass bed can wreck your chances on tournament day.

If you like flipping shallow, you’re going to like flipping deep as well. There’s something uniquely exciting about muscling a big bass waaaay up out of grass, and if you haven’t tried it, you owe it to yourself to give it a shot. Bass out deep get big, fight hard and often bite very aggressively when you hit them in the face with something tasty.