How the Texas pro makes hay with an old-school technique 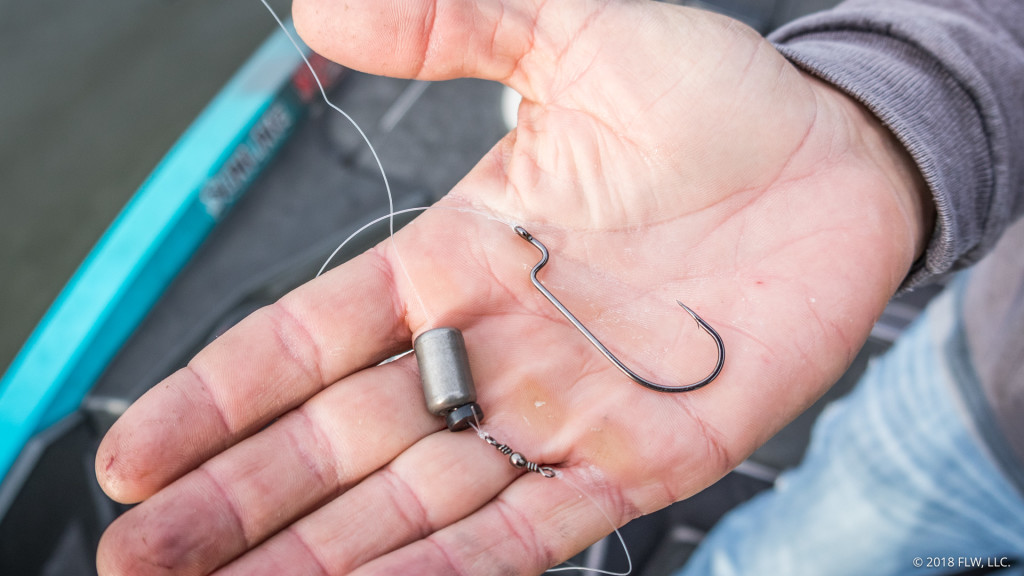 Todd Castledine has long been one of the most fearsome anglers to fish against in Texas. The Nacogdoches pro is good at nearly everything, particularly sight-fishing, but one of his secret weapons is undoubtedly a Carolina rig. From using it for finding offshore structure to catching finicky bass, he’s almost always got one or two tied up on the deck of his Ranger – and you should too.

Historically, the primary application for a Carolina rig is offshore dragging. Castledine is no fool, so he makes use of the rig out deep plenty, but his primary purpose for it is to find fish and learn about deep structure and cover in practice.

“I can cover more water with it than anything else offshore,” says Castledine. “You can move it as fast as you want to and it’s going to stay on bottom. It’s 10-times easier to feel what’s on the bottom with the rig than it is with a jig, especially with the 1-ounce [weight].”

Castledine doesn’t put the rig away on tournament day, in fact, he’s prone to keep throwing it. Especially on lakes that get a lot of offshore pressure.

“Once you find them you can get off the Carolina rig, but I don’t know how many times on Kentucky Lake I’ve found them with the Carolina rig and it’s still better in the tournament,” relays the Texas pro. “It seems like it’s better on the offshore lakes. I think because everyone is used to throwing other stuff, and when you throw something a little different they go for it.”

A C-rig with a little bait is a potent limit-getter, but Castledine keeps slinging it late in the day.

“They always say a jig catches them bigger,” Castledine says. “I don’t always agree with that.” 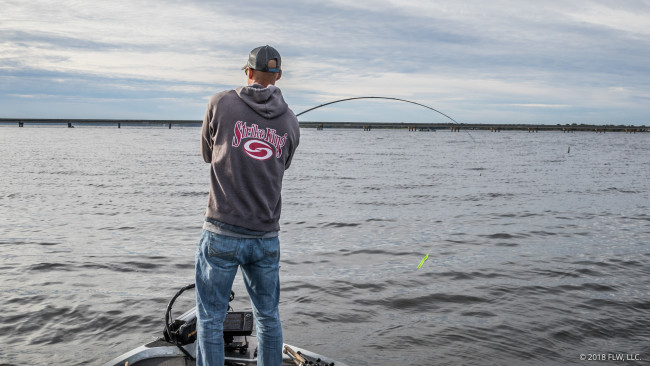 Where Castledine really separates himself from the pack is when he fishes a Carolina rig up shallow. Still rocking a ¾-ounce weight like he would offshore, Castledine is able to give fish a semi-finesse look they don’t often see near the bank.

From there, he’s filled his wallet at Rayburn, cashed in a Bassmaster Open during a nasty spring cold front at Ross Barnet and learned to apply the rig shallow a lot.

“At Ross Barnett when I was down there I was throwing it on pad stems in 2 or 3 foot of water,” he says. “Everyone was doing other stuff – God it was phenomenal.

“You would get hung up on the pads and bring it up over, and when you stopped the bait would settle down and it would move less than a Senko. A cold front had come through and it was springtime and you’d just be sitting there and they’d chomp it. The key was that you could let It sit there for a few seconds without it moving – you’re never going to do that just worming. The rig kinda slows it down for you.”

Home in Texas, the Carolina rig has caught him countless bass in all seasons.

“We throw it a lot around grass a lot on Rayburn,” explains Castledine. “You’ll throw it around the inside edge and the outside edges of the grass, which might be 4 foot to 10 foot. It really doesn’t get bogged down. You’re not throwing it in mats, you’re throwing it in grass that’s underwater.

“A lot of times they’ll be in drains, and the grass grows real crazy in drains,” recalls Castledine. “I freakin’ crushed them in one on Rayburn a few years ago. I made the same cast over and over again in a drain and the grass was growing in columns. I’d cast in and get all hung up and jerk it on through and then all of a sudden, they’d bite it.”

The idea of throwing a Carolina rig shallow is antithetical to how a lot of people think about the rig, but Castledine’s results are hard to argue with. 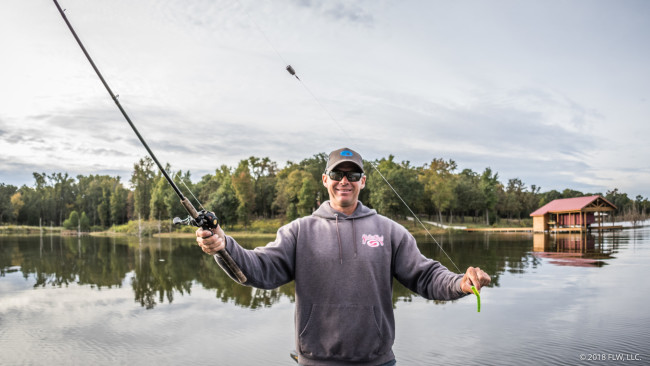 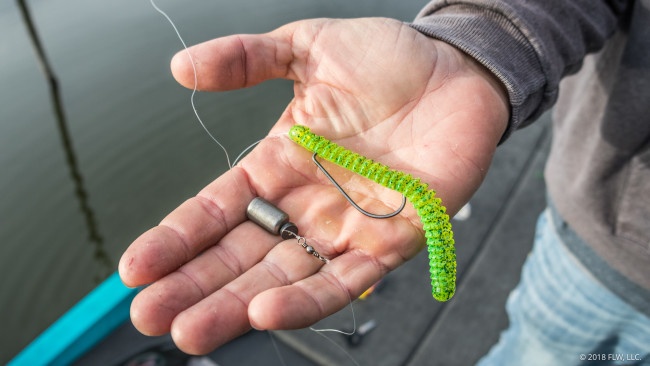 Castledine’s C-rig setup isn’t too out of the ordinary. He uses 20- or 25-pound-test Sunline Shooter for the mainline and the leader, a 1-ounce or ¾-ounce Strike King Tour Grade Tungsten Carolina Rig Weight, a Top Brass Carolina Ticker to protect his knot, a swivel and then an Owner Offset Shank Worm Hook (usually in 3/0) to top it off.

Typically, Castledine rolls with a leader that’s about 30-inches long. His rod choice depends on how much weight he’s using and how heavy the cover is. For the ¾-ounce weight he likes the purpose-built Falcon Carolina Cara, which is a 7-6, heavy-action rod. For the heavier weight or thicker cover he opts for the 7-6 Falcon Cara McClelland ST, which has the same specs but is a stouter rod than the Carolina Cara.

Despite occasionally going up in weight when he’s fishing deeper or the wind is blowing, he doesn’t make many changes. By and large, all he’s doing is changing baits when the fish tell him to, not switching to dramatically lighter rigs or worrying about leader length or line type. 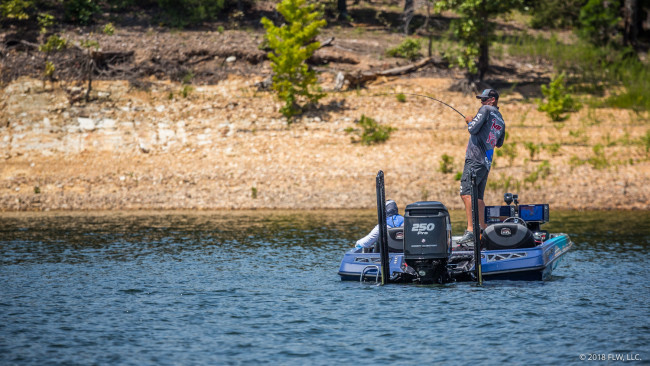 Taking it on Tour

Fishing his first full season on Tour in 2018, Castledine’s biggest learning moment of the season came with the C-rig.

“When I was at Lanier I was throwing a Carolina rig in practice,” recalls Castledine. “I was getting 40 bites a day, it was great. But, I did horrible in that tournament. It got tougher in the tournament and they just wouldn’t eat it – they’d hit it or miss it.”

Later in the season at Smith Lake, Castledine again had a lot of success with the Carolina rig in practice. This time around, he adjusted on derby day, fishing through the same areas with a shaky head instead. As a result, he earned $10,000 and finished 32nd in his second round of action with spotted bass.

Carolina rigs won’t fix all your problems, and there are plenty of folks that might never grow to love it. But you can be sure that it’s always going to have a place in Castledine’s boat no matter the season. You should at least think about making it a consistent part of your game as well.