Catch Your Personal Best from a Kayak 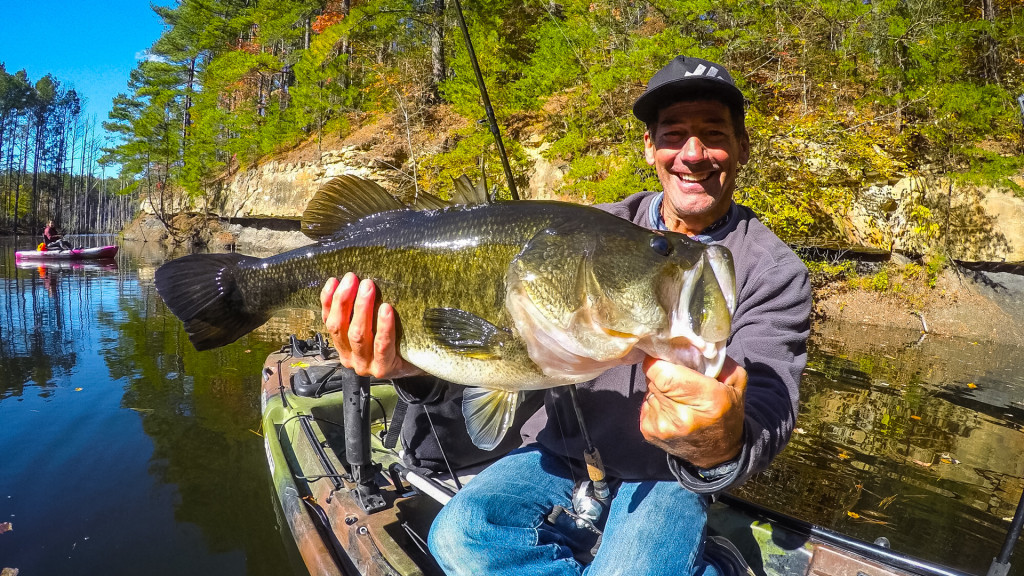 Kayak fishing has come a long way in the last several years. Participation numbers are up, kayak tournaments are on the rise as well, and the number and variety of options available to anglers in the market for a fishing kayak is almost overwhelming.

Eric Jackson, owner and co-founder of Jackson Kayak and three-year FLW Tour pro, has contributed a great deal to the booming kayak market, not to mention the popularity of the sport itself. Gone are the days of kayak manufacturers catering to a niche market of anglers who don’t own a bass boat.

And therein lies the beauty and pure functionality of owning a fishing kayak. Bass boats are great for a lot of situations, and even johnboats can allow anglers to reach skinny water, but true backwater situations – the skinniest of water, the smallest of lakes and the most private of ponds – are often far out of reach for all but the bank angler or kayak owner.

“If there was a nationwide million-dollar competition in the next seven days to catch the five biggest bass, I would fish out of my kayak all seven days,” Jackson says. “Everywhere I would go would be without a boat ramp. That eliminates 80 percent of the fishermen. It’s all about eliminating pressure.”

As anglers who favor big fisheries know, big lakes often hold a lot of big fish. The problem is fishing pressure. The more popular a lake is, the more anglers are forced to compete for a finite resource. As Jackson notes, fishing from a kayak allows anglers to discover and explore water they couldn’t dream of reaching in a bass boat.

And forget everything you know about small bodies of water only holding small fish.

Still, catching your personal best bass from a kayak isn’t as easy as it may sound. Luckily, Jackson has been hammering on big fish from a small platform for a long time and can point your bow in the right direction. 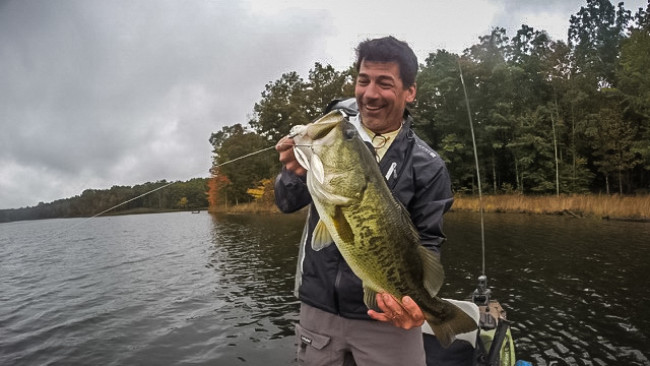 The drawbacks to owning, rigging and operating a fishing kayak are fairly obvious, but each has a similarly impressive advantage. They’re smaller and less stable than big boats, sure, and they have limited storage space and the propensity for getting an angler wet from time to time. On the other hand, they’re much less expensive than a bass boat and allow anglers to get into just about any body of water deep enough to float a small craft.

Loading and unloading a kayak can be cumbersome if you run a big model or want lots of gear, but it can also be kept as simple as you’d like. You can’t put a full array of the latest and greatest electronics on a kayak, and you certainly can’t run 30 miles from the boat ramp to your favorite fishing hole. But there’s something to be said for simplifying your approach to fishing when it comes to trophy hunting.

“When you grab four rods and four lures, it’s a lot more confidence-inspiring,” Jackson explains. “When you’re in a bass boat [with more gear], you know how to do it all, and you try to do a lot more. But when you’re in a kayak, you’re narrowing down the water you can fish. You put your mind and focus on the fish that are there as opposed to running all over the place trying tons of different tactics and chasing fish around.”

Still, the limitations of kayaks will always scare away some anglers who place a premium on comfort, range and being able to load down a boat with gear. For everyone else, there are plenty of huge fish to chase down from a kayak.

Jackson uses his kayaks to get into skinny water and lakes that don’t have a boat ramp or that don’t allow motors. He often asks owners of private ponds and lakes for permission to fish their waters, and he likes to use Google Earth to spot good fishing locations in advance.

“I’m a big fan of using Google Earth to find places to fish,” he says. “I call it exploration kayak fishing.”

No matter where Jackson fishes, he almost always uses four rods (all baitcasting, three of which are medium-heavy power) and brings along limited tackle. Versatility is key when fishing from a kayak, primarily due to storage limitations. He has a combination of his handful of go-to baits tied on at all times: a Strike King Rage Swimmerswimbait, a Strike King Tour GradeSwim Jig with a Strike King Twin Tail Rage Menace trailer, a spinnerbait and a Strike King KVDsquare-bill crankbait in a shad or craw pattern.

In stained water – and really anything short of crystal clear – Jackson will opt for straight braided line on all his reels, usually in the 50-pound-test range. His priority is getting fish out of heavy cover and avoiding break-offs.

Jackson also uses electronics in his kayaks, which still allows him many of the same functional benefits as a bass boat.

“When I go fishing in small lakes, I bring my electronics because I want to see the bottom,” he explains. “I’m either looking for bait or structure.” 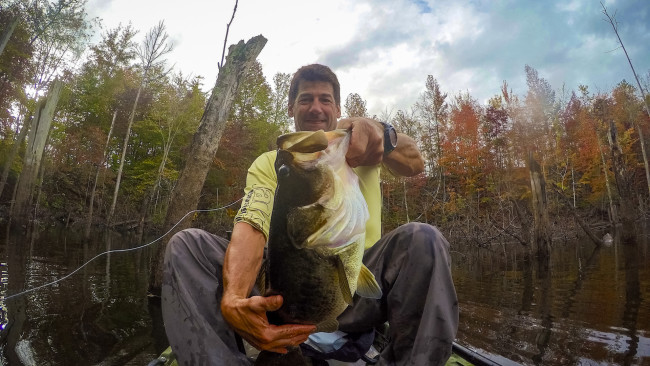 Where to find big fish

Big bass can grow in any body of water that has the environment and food sources to allow for long-term growth. If you’re looking in the right places, catching a personal-best bass can be even simpler than taking your bass boat to a large, heavily pressured fishery.

The trick is to identify the right fisheries. Certainly, if you find a lake that’s full of a lot of small bass, there could be an issue with stunting, but you could also be on the right track.

“I’ve fished four lakes in the last four years that have produced multiple 8- and 10-pounders,” Jackson notes. “In each one I’ve struggled to catch a 3 or 4.

“People get frustrated and leave, but if there’s a bunch of little fish it’s a good sign. The reason why is the bass that get big eat all the baby bass. If you catch a lot of 1-pounders and 1 1/2-pounders, in my experience, those smaller bodies of water have 1 1/2-pounders and 8-plusses.”

Jackson favors small lakes and private waters when chasing big bass, but he also spends plenty of time on the creeks and rivers of central and eastern Tennessee. One of his favorite methods for hammering big bass is working upstream from creek channels that run into lakes.

“Go to big public lakes, but find the tributaries,” he explains. “Go to where it’s too shallow for the bass boats, and then go five or 10 miles upstream. Those fish aren’t getting pressured.

“Go upstream and find areas with moving water where fish can’t go any farther, like at the base of falls or something. Big fish will stack up at the base of that waiting for bait.”

“For whatever reason, they all seem to be big. You’re not wading through 12-inch bass.”

Whether on a stream, river, private pond or large public lake, kayak fishing certainly has its advantages. If catching a personal best – or simply having a fishing hole all to yourself – appeals to you, it’s worth heeding Jackson’s advice and finding out for yourself.