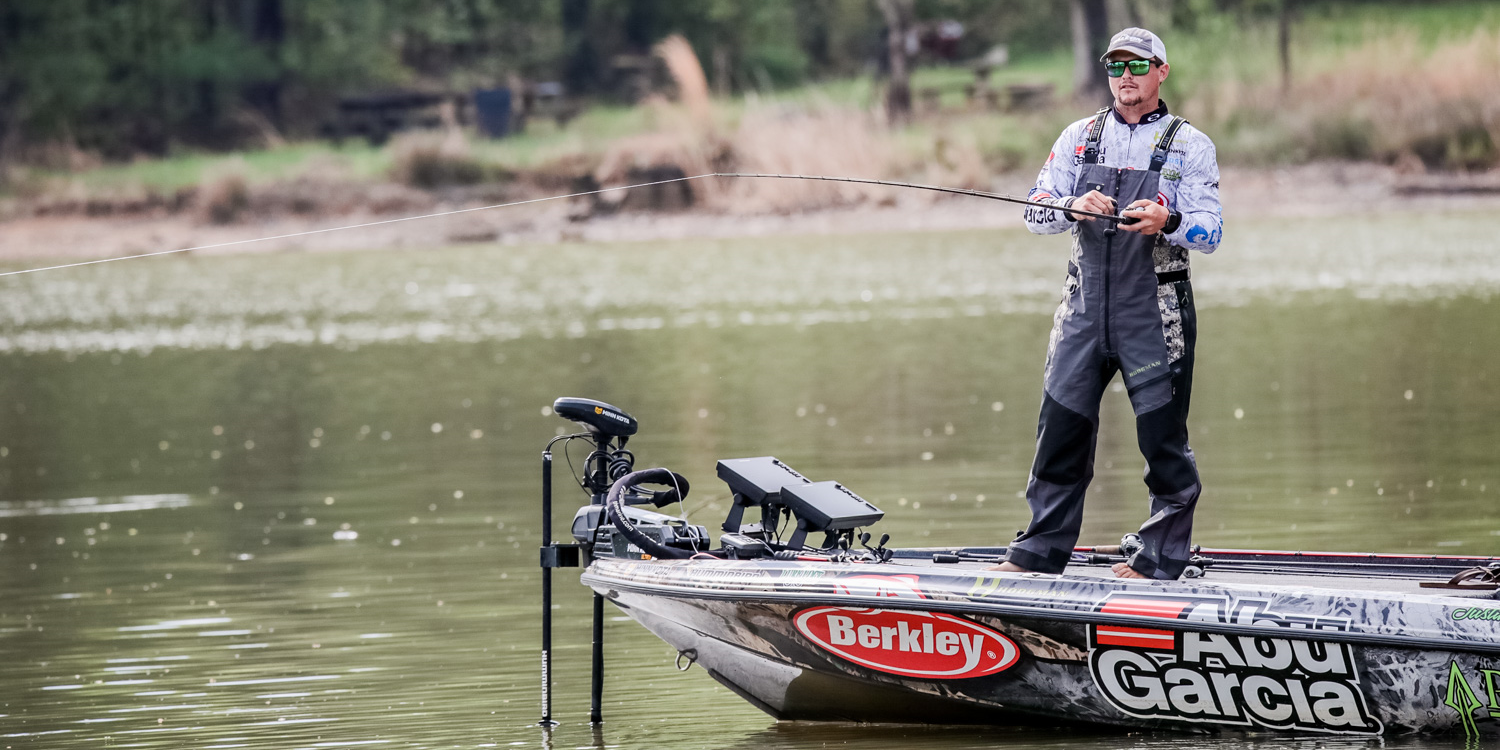 If you ask MLF pro Justin Atkins about throwing a spoon in the fall, get your pen and paper ready: The Alabama pro has a helpful thing or two (or 10) to share about an old-school bait that never, ever goes out of fish-catching style.

“I do like to fish a spoon a little,” Atkins jokes midway through a 20-minute Q&A that covers everything from feathered trebles to spoon action to barrel swivels.

Atkins burst onto the national bass scene in 2016 when, as a rookie, he won the Forrest Wood Cup on a topwater pattern on Lake Murray, South Carolina. But while a topwater earned Atkins his biggest payday to date, he confesses that spoon fishing is a special interest that ranks up there with bowhunting for him.

“I moved to the Tennessee River in 2015, but I had fished there a lot from around 2007 to 2015, and sometime in that time between 2007 and 2010, fishing with the big magnum spoons turned into a big deal,” Atkins says. “That was also when I was learning to fish offshore, had good mapping for the first time in my life, and was learning how fish set up on those community holes. A spoon was an aggressive pattern, and it sure beat throwing a worm out and dragging it back. It took skill and refining, just like bowhunting, and something that I took a real interest in.”

And just as he tinkers to refine his bowhunting (3- or 4-inch vanes? Straight, 4-degree offset or left-helical fletchings?), so does he tinker with spoon fishing.

Fabulous for the Fall

Atkins declares the fall to be one of his favorite times to fish a spoon.

“Fish get very bait-oriented in the fall,” he says. “They feed up heavily on shad, and it doesn’t really seem like crawfish are big players. This time of year is really about the shad baits. In the summertime, you’ll go to a place like the Tennessee River and see 100 schools with 50 fish, but in the fall, you’ll see 10 to 15 schools with hundreds of fish. They really bunch up and feed heavily on shad, and that’s the time when a spoon is going to imitate the baitfish the best. It’s a great way to catch ‘em in the fall. Plus, a spoon is a super-versatile bait: you can fish it 7 feet or 70 feet as long as you know what the target is.”

Atkins starts his search for fall fish in varying locations, depending on what kind of water he’s fishing. If he’s on a big river system like Guntersville or Pickwick lakes (which have long-established histories of fish schooling heavily), he’ll move into creek arms in search of bass that cruise out of the main lake, following bait.

“They get back in those creeks and fingers off the main lake and school up because that’s where the baitfish go,” Atkins says. “Those creeks are where the water starts to cool first – the cooler weather starts to affect those areas first, so they come into play first.”

“If I go to a lake like Table Rock, Cumberland or even Smith Lake, bass will get out under bait and roam,” Atkins says. “A lot of time they’re oriented over some kind of structure and it looks like they’re coming up out of the abyss, but fish will push bait to the surface. You’ll see bait in, say, 15 feet over 40 or 50 feet of water. Those fish are going to show themselves on your electronics.”

Atkins’ choice of spoons in the fall varies according to the size of the bait in the lake he’s fishing, but his general go-to is a 4-inch, 1-ounce homemade spoon with a slightly wider body. He prefers that length, weight and body shape because it produces the kind of action that works best in the fall.

“Strike King makes a 4-inch flutter spoon, Nichols makes some good spoons, but most of the time I’m throwing a 1-ounce spoon that my buddy makes,” Atkins says. “They all have different lengths and widths, I just look at the bait and try to pick a spoon in the right size range. I’ll throw a 2-ounce spoon a lot in the summer – it’s heavy and you can be aggressive with it – but I want a spoon that flutters really hard and takes longer to get to the bottom in the fall. It’s more of a ‘finesse-y’ type presentation where it takes two seconds to fall a foot on slack line. Since everybody started throwing the Magnum Spoon, it’s turned into a really fast, aggressive presentation, but I like to slow it down in the fall.”

Action Gets the Reaction

Atkins matches the subtlety of his spoon choices in the fall with subtlety in the way he works the bait. Dispel all thoughts of ripping a spoon: “It doesn’t take a lot of effort to get a lot of rise out of a spoon,” he says.

“I work it a lot with the reel,” Atkins continues. “I’ll crank really hard for a few cranks and then let it fall. If fish are close to the bottom, I’m cranking it maybe two or three times, but I might go five to seven cranks if fish are suspended. I’ll cast and count it down, so I have an idea of how much rise I’m getting with the spoon and then just work it from there. If you’re around fish, you’ll get a quick bite. You kinda just have to pay attention because it varies each day, but the fish will tell you what they want.”

The Right Gear Is Critical

Atkins is adamant about the importance of the right rod and reel for spoon fishing. His reel of choice is an Abu Garcia Revo4 Rocket with a 10.0:1 gear ratio spooled with 20-pound Berkley Trilene 100% Fluorocarbon, which he matches with an Abu Garcia Revo Ike 7-foot-10 medium-heavy Delay rod.

“That’s a long rod that has a lot of bow in it, but when you’re working that bait, you’re still always putting pressure on it,” Atkins says. “It has some give to it, which is important. If a fish hits it on the fall and you’re thinking about the football game and not paying attention, you feel that bite and jerk, and you rip it right out of a fish’s mouth.

“That Delay rod gives you some cushion when you pull on it really hard, it’ll make a big difference in landing fish. One of the biggest mistakes I see people make is throwing a spoon on too stiff a rod.  You need that rod to have some give so you can play that fish when he jumps.”

Atkins keeps it simple with spoon colors in the fall: chrome with a black stripe. But he enhances all of his spoons with a No. 1 or 2 Berkley Fusion19 Treble that he’ll tie some black feather on.

“I’ll go as big as I think I can get away with without affecting the action of the spoon, but I really think that black feather gives that fish something to focus on,” Atkins says. “A spoon goes fluttering by, I don’t think the details of the color matter that much, but you really want that fish to hit the hook end. That feather gives him an end to attack.”

Atkins prefers a barrel swivel (size varies according to the size of the spoon) and switches to oversize split rings.

“The barrel swivel keeps twist out of your line; plus, you can cast better, and when you hook a fish, there’s no leverage for him to pull against,” Atkins advises. “The oversized split rings are important because you’ll pull your smaller split rings apart when you jerk on that sucker.”