Biffle’s “Wakeup” to the Swinghead Jig: It Works in Cold Water, Too 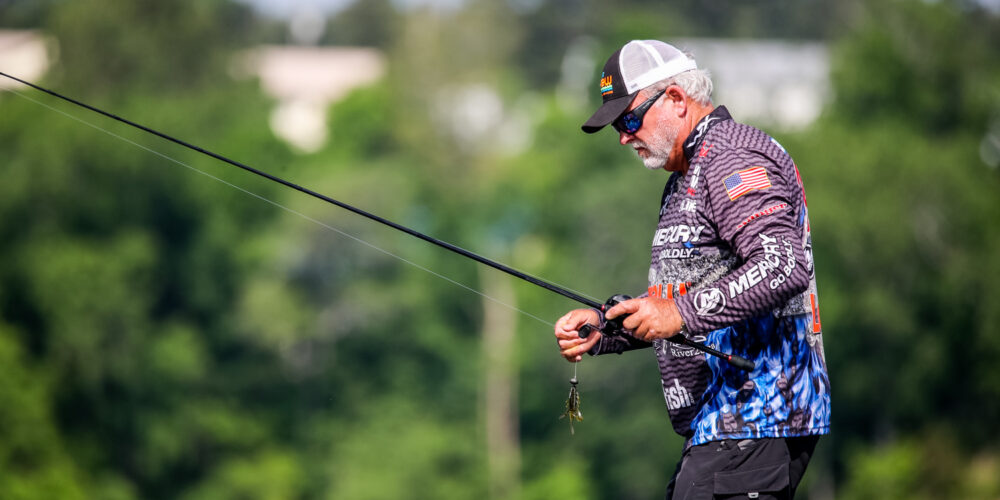 Water temperatures are cooling across the country.

In many cases, a drop in water temperatures is a signal for anglers to slow their presentation. That may or may not be the case for Tommy Biffle when he’s fishing the HardHead jig during this transitional season.

Development of the Gene Larew Biffle HardHead Jighead and Gene Larew Biffle Bug plastic trailer combination led Biffle to a trailblazing technique that covers water far more effectively than conventional bottom-bumping jig-fishing approaches. The HardHead hook secures to a hookeye-type attachment that allows that hook to swing freely from side to side during the retrieve (hence the generic name “swinghead”). The fast retrieve activates the appendages of the Biffle Bug, giving it a frantic, lifelike scurrying action.

Though many link the technique to fishing for aggressive bass in summer, Biffle says his “wake-up” to the bait combination’s true potential came during a cold weather photo session with an outdoor writer.

“I had one tied on, but I hadn’t used it,” recalls Biffle, who had been reluctant to test what he expected to be a tough winter bite that day. “On the first cast, I caught a 5-pounder, a good picture fish. We shot photos. Then I went back to fishing and caught another 5-pounder, then another … five fish over 5 pounds in five throws!”

Biffle initially thought the HardHead and Biffle Bug a combination pretty much tailored to a chunk rock bottom. Today, however, he lauds its effectiveness over a wide variety of bottom types, and has won major tournaments fishing it over sand, pea gravel, and larger rock as well as classic chunk rock conditions. The swinging jighead adds a wrinkle to the presentation of other plastics, including worms, as well.

“You can cover a lot of water with it because it’s almost like fishing a crankbait,” Biffle says. “I cast, let it go to the bottom and reel it. The faster you reel it, the better they like it. The fish think it is getting away. But as long as you keep it in contact with the bottom, you’re good.”

Biffle confesses that his discovery of the effectiveness of a “fast reel” approach to swinghead technique was accidental. Like most anglers who employ the jig for the first time, he fished it initially like a football jig, or with a dragging, Carolina-rig approach. Once he started fishing it in shallow water, however, he found himself on the “fast” track, in more ways than one.

“I found that when I fished it slowly in shallower water or over bigger rock it got hung up,” he says. “But the faster I reeled it, the less it got hung up – and the better the bass liked it.”

He continued to work the bait combo at a rapid pace in deeper water, too, and there its effectiveness increased as well.

Today, he adjusts the weight of his HardHead jig to depth and conditions. If fishing in 5 feet of water or less, he will most often use a 5/16- or 7/16-ounce head. In deeper water, the 11/16- and 1-ounce jigheads become his workhorses. A 3/16-ounce head also comes into play in select circumstances.

“I went to a 7.3:1 gear ratio reel, and I started reeling it fast,” he says. “I tell everybody to reel as fast as you want to as long as you are hitting bottom.”

Biffle cites numerous cases where enthusiastic proponents of his HardHead/Biffle Bug combination have boasted of their success with slower or even traditional jig fishing approaches, only to witness comeuppance when pitted against Biffle’s fast-cranking approach.

“There’s no wrong way to fish it,” he says. “There’s just a better way to fish it. A guy will fish it, just hop it along, and the bait looks great and catches fish. But if I’m reeling it, I’ll catch 10 fish to that guy’s one. Just stay in contact with the bottom. It doesn’t matter if you’re fishing shallow or 30 feet deep. Just use the jig weight size that will keep it on the bottom.”

Time to Slow Down

Yet time comes when slowdown becomes essential. Steep-sloping structure poses one such circumstance.

“When bass get on those steeper slopes, those 45-degree banks, you need to use a bigger head and wind a bit slower to bring the bait down the slope,” he says.

Cold weather and water conditions can dictate “slow down” as well. Biffle recalls fishing the Bassmaster Classic on Grand Lake. Fast fishing the HardHead/Biffle Bug tandem had him anticipating victory during practice rounds. But when air temperature dropped to 11 degrees on the opening day of the tournament, his pattern died.

But switching to a shaky head worm on a 3/16-ounce HardHead and downshifting to a significantly slower retrieve the following day got him back in the game. He continues to favor that combination in similar conditions today as well as during the September doldrums.

“I can put a YUM Dinger (worm) on that jig during the worst month of the season, and it is like flipping a switch,” he says. “For some reason in September they want something long and fished slow.”

Another favorite cold-water adaptation is a switch to a smaller trailer. Tommy’s favorite – and logical – choice is the Gene Larew Biffle Bug Jr., a 3.5-inch version of the standard 5-inch Biffle Bug.

“If they’re not hitting in colder water, I just put that tiny ‘junior’ bug on,” he says. “If you find the fish are not hitting it or you are just getting a bump, change to the ‘junior.’  You’ll catch ‘em!”