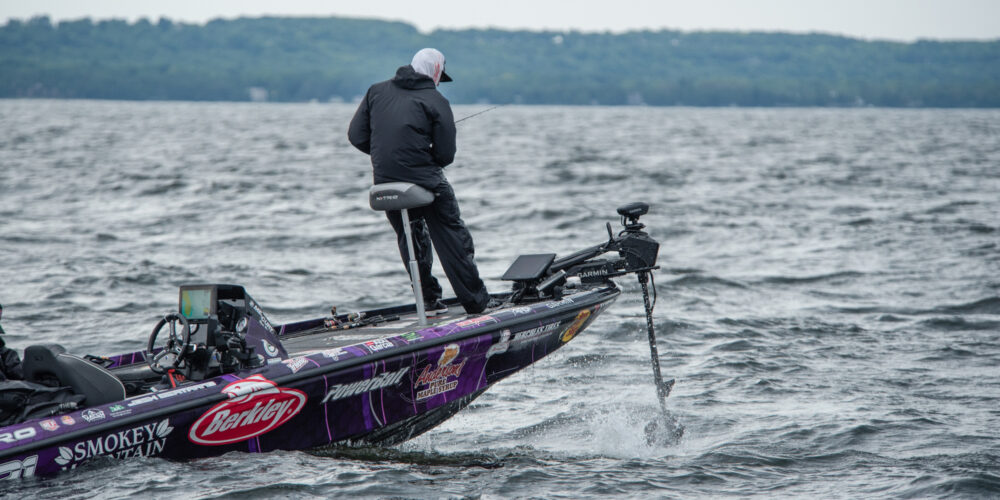 Bass Pro Tour Stage Five on Sturgeon Bay was almost exclusively an offshore-smallmouth bass affair. There was a small handful of largemouth placed on SCORETRACKER® and a decent amount of shallow-water smallmouth, but the vast majority were brown bass in deeper water and far away from the bank.

The conditions, body of water and time of year made this event ideal for seeing fish on electronics and then dropping a bait to them. “Video game fishing,” as it’s often called, was a significant factor.

Out of the Championship Round field at that event, five of the 10 anglers relied heavily on Garmin Panoptix LiveScope forward-scanning sonar. Marty Stone and JT Kenney noticed this and discussed it in depth on MLF NOW!, marveling at how forward-facing sonar has become a mainstay for offshore fishing.

“Game changer” is one of the most overused terms in fishing, but Garmin LiveScope has undeniably altered how Bass Pro Tour anglers (and legions of other anglers) are targeting bass with their electronics.

Mark Daniels Jr. racked up big numbers of smallmouth bass with a Ned rig and a drop-shot all week long at Sturgeon Bay. His massive haul of smallmouth included daily catches of over 100 pounds on his final two competition days.

He credited his boat’s LiveScope transducer for allowing him to catch fish continually, and to stay on schools throughout the tournament.

“The places I was fishing had groups of fish and if you caught one and reeled it in, it would break up the school,” he said. “LiveScope made it easy to get right back on the fish after that happened.”

Besides targeting groups of fish relating to offshore shoals, he would also locate individual fish near cover with his Panoptix LiveScope.

“Some of the ones I caught were individual fish by rocks and I would see them and pluck them off,” added the Alabama pro.

“The bass I was catching were actively feeding on baitfish. They were on the move constantly,” Bertrand said. “If I caught one, weighed it, and then got ready to make another drop, they were gone from the area.”

To get back on the fish, he scanned in every direction around the boat to find feeding bass.

“LiveScope made it easy to relocate them. It would take no time at all to pan around and see them again,” Bertrand explained. “Without it, you would just be casting around aimlessly trying to locate them again.”

He also credited the Force trolling motor for his solid finish in the rough Great Lakes waters he was fishing.

“The Force did great in those big waves because it is so powerful and efficient,” Bertrand added. “Also, because it is a brushless motor, there was no interference on my 2D sonar and Panoptix LiveScope. That made it so much better when trying to see fish around and under the boat.”