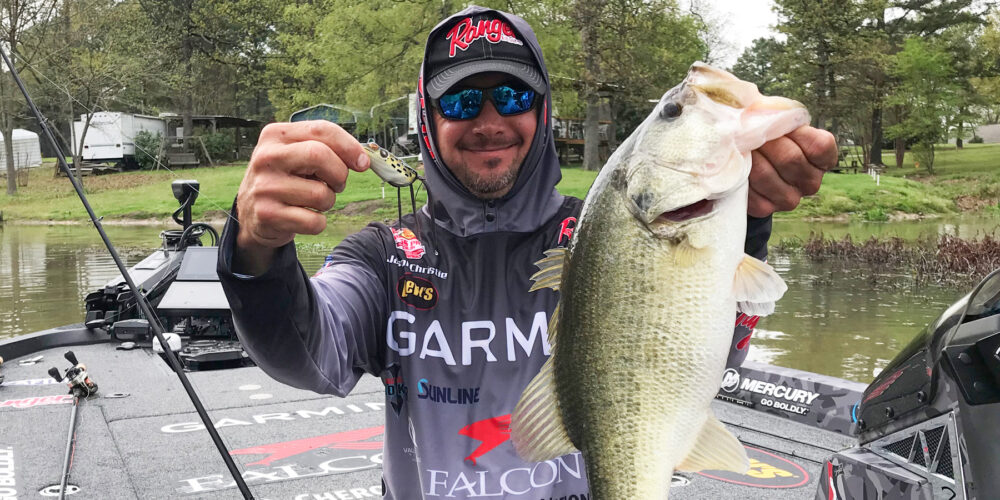 MLF pro Jason Christie says that a frog is the most "finessy" of all topwater baits.
March 24, 2020 • Mike Pehanich • Major League Lessons

For most bass anglers, fishing a frog is a choice between an exciting high-risk technique bound to bring on frustration and, well, just about any other technique that produces fewer goose bumps but steadier returns.

Such is not the case for Mercury pro Jason Christie. The Oklahoma pro has tailored frogging to his personal style of angling in a way that brings out the best – and most – in the faux frog.

Here are three of his discoveries your frogging education may have missed.

Your Frog as a Finesse Bait

“Probably 90 percent of the time guys talk about frogs, they’re thinking grass, mats, thick weed beds,” Christie says. “But I’ve caught big stringers over the years on frogs fished in open water, on lakes you wouldn’t consider fishing a frog first. A frog is the most ‘finesse-y’ topwater bait made. It has no rattles. It’s as lifelike as can be. On some open-water lakes, everyone is throwing Zara Spooks or buzzbaits and other noisy topwater baits. Fish get accustomed to those.”

Your Frog is a Deadly Search Bait

Drawing a nerve-shattering strike from a bass lying in ambush under deadfall, a hole in a mat or a pad pocket with a tantalizing twitch defines the frogging game for most anglers. But Christie is more likely to turn on the jets with a froggin’ rod in hand.

“There are really good frog fishermen who fish a frog slow,” says Christie. “I’m not saying what they’re doing is wrong, but I don’t fish it that way. I fish the bait fast in most cases. I’m covering water.”

He will make multiple casts to a promising area or slow his presentation if he thinks a bass is ready to bite. But in prime bass acreage such as broad mats of milfoil or sprawling lily pad beds, his frog is frantic and on the move.

“Seventy-five percent of the time I’m moving the frog quickly, getting the fish that want to eat,” he says. “It’s all about efficiency.”

Frogging Can be a ‘Weighty’ Matter

Christie will call upon the Booyah Poppin’ Pad Crasher and Toad Runner for spot work in frogging country, but the Booyah Pad Crasher is his workhorse and, by far, the frog he most employs. He subdivides his frog collection by color – principally “white belly, dark black belly and brown belly (“Sunburn”) – and by weight.

He’ll fish an unweighted Pad Crasher in open water or around wood, or even skip it under a dock or tree limbs. When he’s fishing matted vegetation exclusively, he may have two or more frogs weighted differently.

“Around mats that are very thick, I go to a 25-BB frog,” he explains. “Three to seven BBs is probably the norm, and I have more of those than any others.”

A weighted frog penetrates the mat, displaces water, and ups the likelihood a bass will find a frog scudding the lid of the jungle.

“The whole thing about mat fishing is putting the bait in front of the fish, getting the bass to notice it,” he says. “If you can’t get them to notice the frog, they aren’t going to eat it. They won’t know it’s there.”

Christie notes other advantages to weighting his frogs.

“It increases casting distance,” he says. “I think it also increases hookups, though that may seem weird. It adds more weight to the frog. When the fish comes up to bite it, the frog stays where it needs to be. It doesn’t move as much.”