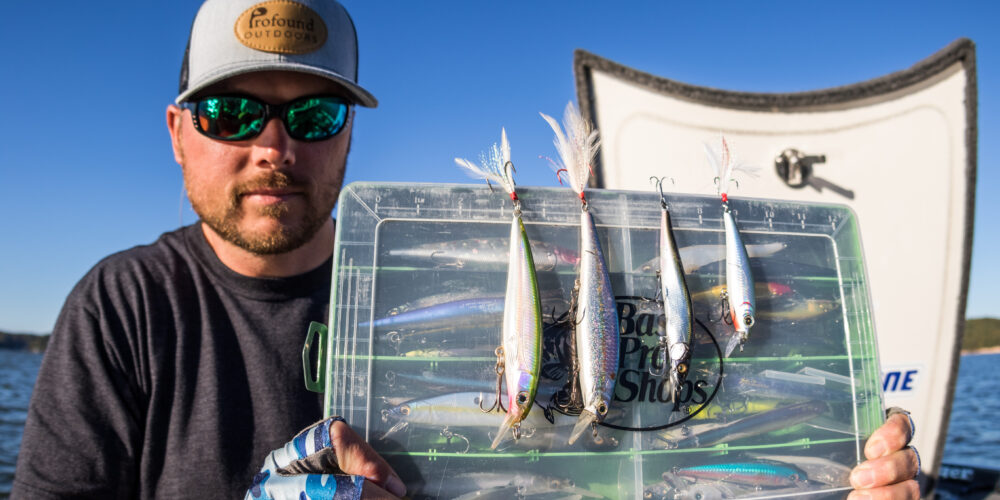 Back in 2020, Jimmy Washam knocked out a runner-up finish in a weather-shortened event at the Harris Chain. Then, he caught most of his fish on a jerkbait in offshore grass, and it was a formative experience for the 2021 Tackle Warehouse TITLE champion. Since his finish at the Harris Chain, Washam has cashed checks on a jerkbait all over the country, and a lot of the time he’s fished it in non-standard situations around grass.

Last winter, Washam arrived in Florida a day early to break in his motor and launched at one of the secondary lakes on the Harris Chain to run and fish a little in water that wasn’t off-limits. After he had done a few laps and put some hours on his motor, he settled down for a few casts.

“I had a jerkbait tied on, and also a ChatterBait, and I got to a boat lane with some pads and caught one on the ChatterBait,” he explains. “I threw back there and one slapped it. I pulled the jerkbait out, popped it down there about two pops, and as soon as it went out of sight, I caught one. I caught a solid 50 fish in that boat lane on Anchor Mode for two hours. It was like every other cast.

“I took that same jerkbait to the Harris Chain, and every time I got around the right offshore grass, if there was a fish there he was going to eat it.”

Since then, Washam has caught jerkbait fish around grass all over the country. From the bays of Lake Erie to the Potomac River, he’s put weight in the boat and money in his pocket jerking grass.

“I think that it pulls fish out of grass better than any other bait,” Washam says. “There are more effective ways to present a lure that won’t get hung in the grass, but they see those baits all the time – they don’t see a jerkbait darting back and forth.”

For his basic jerkbait tackle, Washam goes with a high-speed, 8.3:1 gear ratio reel, a 6-foot, 9-inch, medium-power Hammer Rod and fluorocarbon. The size fluorocarbon he uses is very important for how he fishes a jerkbait, and Washam will upsize his line all the way to 16-pound-test if he wants to keep his bait very shallow, with 12-pound getting the call for deeper grass and 14-pound getting the nod in most shallow grass situations.

“I can make a long cast, and depending on the angle of my rod tip, I can work the bait from a foot deep where I can see it to down to about 3-foot,” he details. “You take a hydrilla flat that’s 5- or 6-foot deep – if you put a big jerkbait on heavier line you can hurt ‘em.”

For baits, Washam typically likes larger jerkbaits aground grass including the Lucky Craft Pointer 128, the Megabass Ito Shiner and the Rapala X-Rap XR12. In the fall, particularly around grass and small shad, Washam dotes on the Azuma Bray Z for work on the Tennessee River.

The Retrieve is Key

Hitting the proper cadence jerkbait fishing is a pretty huge deal anytime, but it can be especially important around grass. One of the things Washam often does is to add an upwards jerk throughout his retrieve.

“I like it around grass to give it lift, so I’m not plowing it into the grass and losing the cast,” explains Washam. “I’ve found that when you give the rod two pops up, that bait is tracking on one path, and then all of a sudden it darts towards the surface. That’s when a big one reacts a lot. I caught every one of my big fish last year at Harris when I would give my rod tip a pop up. They might hit it on the next twitch down, or on the second twitch up, but they would hit it around that erratic movement every time.”

Figuring out specific retrieves is important regardless, and Washam’s rule of thumb is mostly to assume that a jerkbait should be working. If everything else looks right to him, he’ll start playing with the retrieve very quickly.

“Maybe they want it faster,” he says. “Especially if I’m getting followers, I work it faster. At Okeechobee, I found them in practice, and they would eat it just working it regular. Well, in the tournament, they would not touch it the regular way, and I had to give really light, quick little slaps with my rod tip. The bait was almost sitting in place walking, as soon as I did that it started working. If I’m in a place where it feels right and I feel like I’m putting it in front of fish and I’m not getting bit, it’s time to figure out a different cadence.”