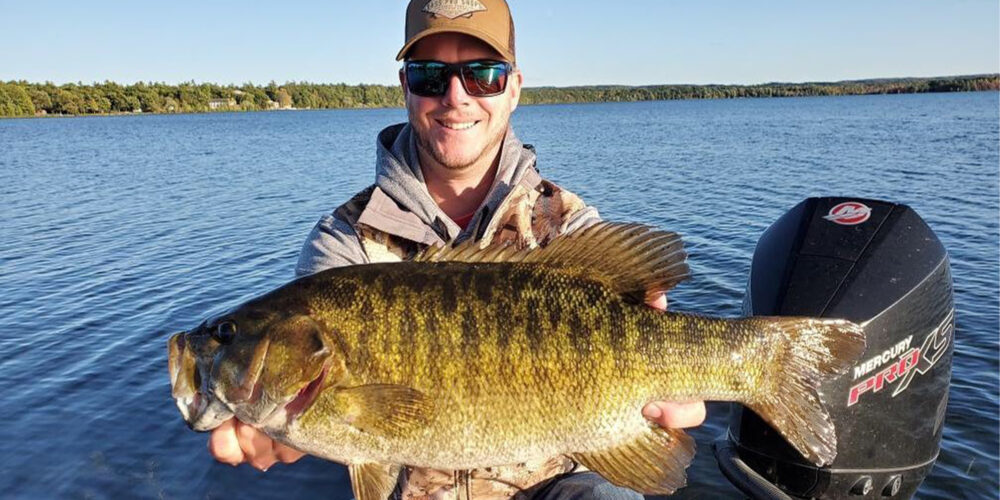 For many anglers, smallmouth bass are a mystery. Unpredictable would be an understatement for the bronzeback, but some anglers just seem to understand them and their subtle quirks as they’re more fickle and move much more than a largemouth.

Michigan’s Jonathon VanDam has two major wins in his career and both came thanks to Great Lakes smallmouth (Lake Erie and Green Bay) during the summer months. He knows their nuances and keeps things surprisingly simple when targeting smallmouth during the warmer months.

The two vital pieces of the puzzle for VanDam’s smallmouth approach are flats and current.

“The number one thing is finding some current because it positions the fish. Some smallmouth do roam around, but most of them would rather sit in one place and wait for a ball of baitfish to come to them,” VanDam said.

Finding current doesn’t necessarily mean finding a river, especially when it comes to the Great Lakes and that’s where flats come into play.

“The Great Lakes have a lot of natural currents that you can’t always see, but you just have to realize that it is there,” he said. “Flats adjacent to a sharp break into deeper water will give the bass a place to move up and down to feed and the break to the flat makes a wall for them to ambush forage. The current will also be stronger in these areas as it changes from deeper to shallower water.”

While most of what VanDam refers to above is related to fishing for smallmouth bass in his home region, some of the same principles will apply anywhere they swim.

“In Southern lakes, you’ll catch an occasional one out deep ledge fishing for largemouth. But, often bluff walls, are the key,” he said. “They are still relating to current and those bluff walls do the same thing with current (as flats on the Great Lakes) and help position the fish better.”

There are no big secrets when it comes to VanDam’s top summer smallmouth baits: a drop-shot, tube, and small swimbait. According to him, knowing when to use each and being in the right area are the key to success.

“A drop-shot is number one, it’s a given and everybody knows it works for summer smallmouth. What I like to do is have a few different styles of baits ready,” he shared. “I fish smaller baits like the Strike King Dream Shot and Half Shell and have another one rigged up with a bigger profile plastic like the Z Too (a soft plastic jerkbait).”

VanDam fishes them on a 7’2″ medium-light Favorite Fishing Jack Hammer spinning rod and will typically use a 3/8 or 1/2-ounce drop-shot weight when fishing the Great Lakes.

“I do a lot of short pitches out in front of me with the drop-shot and I’ll let it fall to the bottom, shake it a few times, and then do it again. I don’t make many long casts with it,” he added. “You also always need to be watching your electronics in case you need to drop it on one you see on the graph.”

For the tube and swimbait, he decides between these two based on the weather and what he sees on his electronics.

“I use the tube more to search for fish and use long casts with a 3/8 or 1/2-ounce jighead and fish it fast with bigger hops. If it’s slick calm, you’ll have to drag it much more to get bites,” he said.

VanDam’s favorite swimbait is a 3.25″ Strike King Rage Swimmer and he’ll fish them in lowlight conditions and times when fish have moved onto shallow flats. He also gauges when to use it based on what his electronics tell him.

“If you don’t see fish on the graph in deeper water, they probably moved up on a shoal or into shallower water. Smallmouth have a reputation for moving a lot, but my experience is they don’t move too far away,” he said. “If you have been catching them good in deeper water and can’t get a bite, they might have just pushed a little shallower.”

For both the tube and small swimbait, he fishes them on a Favorite Fishing 7’4″ medium-heavy Jack Hammer spinning rod.

Great Lakes smallmouth tend to bite best when the sun is out, according to VanDam.

“They’re sight feeders and are a sun-oriented fish. They can also be notoriously picky when it comes to baits and colors,” he said. “Generally, I like natural colors to match baitfish and gobies, but sometimes you have to adjust brighter colors.”