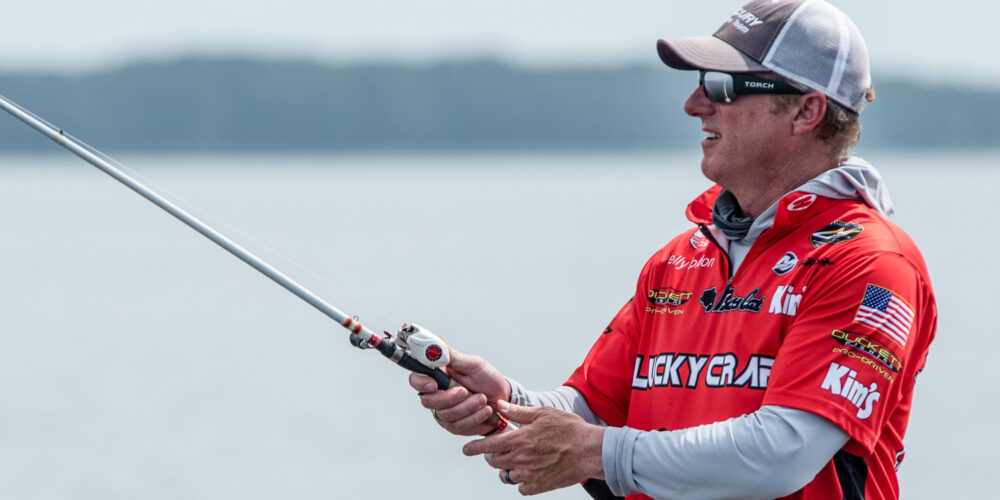 Autumn is “baitfish time” for MLF pro Kelly Jordon, whose home in Flint, Texas, is within easy reach of waters with double-digit Florida-strain bass, including world-renowned Lake Fork.

“The water is cooling,” Jordon says. “It was 85 degrees in September. Now it’s in the mid to low 70s. The turnover has taken place. Some of the best of the fall feeding frenzy runs from now until water temperatures drop into the upper 50s.”

Baitfish school up at this time of year, and bass begin to feed up for winter.

“This is their ‘fall harvest,’” Jordon says. “Baitfish have been growing all summer. In a lot of lakes in Texas, bass are feeding like crazy, getting fat and healthy.”

The “match the hatch” concept is much in play, and Jordon takes pains to select a lure size and color that resembles the bait that bass are keying on.

“I like lures that imitate shad or the baitfish of the area,” Jordon says. “In fall, 99.9 percent of the lures I’m throwing are imitations of baitfish.”

But fall can be a challenging time, too.

Jordon concedes that bass are often tough to locate late in the year. The shad schools that draw most of the bass’s attention may be shallow or deep. Complicating the hunt, fall bass seem to be more pelagic than cover-oriented. They often follow roaming schools of shad in open water.

Yet there’s a bright side to this scattered feeding, too.

Big fish are frequent targets as the calendar shifts to November and early December.

Topwater lures that imitate the baitfish – Walking baits that resemble shad are ideal on his trophy lakes in Texas. Leading Jordon’s list is the Lucky Craft Gunfish.

“You can throw it really far,” he says. “It shines this time of year.

Buzzbaits – If he’s fishing shallow water near cover or in a shallow grassy area, a buzzbait is an effective tool.

“A big threadfin may be 5 or 6 inches long, but gizzard shad can grow well over 10 inches and weigh as much as two pounds,” says Jordon. “If bass get on these, they’ll knock a hole in the water to hit a spoon.”

Bass love flat-sided crankbaits as water temperatures tumble. Jordon developed the Lucky Craft KJ Flat, a small flat-sided squarebill crankbait that he says is “dynamite in fall and winter” to capitalize on this phenomenon.

“For whatever reason, flat-sided crankbaits really shine when the water temperature gets below 70 degrees,” he says. “Lipless crankbaits get sexy again in fall.”

A lipless crankbait is another form of flat-sided crankbait. It’s a versatile one, too. Jordon’s favorite is the Lucky Craft LV 500.

“You can fish it with a lot of different retrieves,” he says. “You can swim it, stroke it, burn it, drag it, “burn-and-kill” it, and hop it off the bottom.”

Medium retrieve – This is his basic presentation, often the starter for the day. It’s just a steady medium speed retrieve.

Burning retrieve – A fast retrieve over grass can be extremely effective. With rod tip high, it may be the only way of keeping the bait clean.

Sink-and-hop – Cast and let the bait sink to the bottom. Hop it. Let it fall back down.

Slow roll – Allow the bait to hit bottom. Slowly reel, keeping the bait in contact with the lake floor.

The “stop-and-go” variant – Any speed of lipless crankbait retrieve can be more effective with the added twist of stop-and-go.

“Just stop the bait for a second, then start reeling again,” advises Jordon. “If any straight retrieve is not working, try this.”