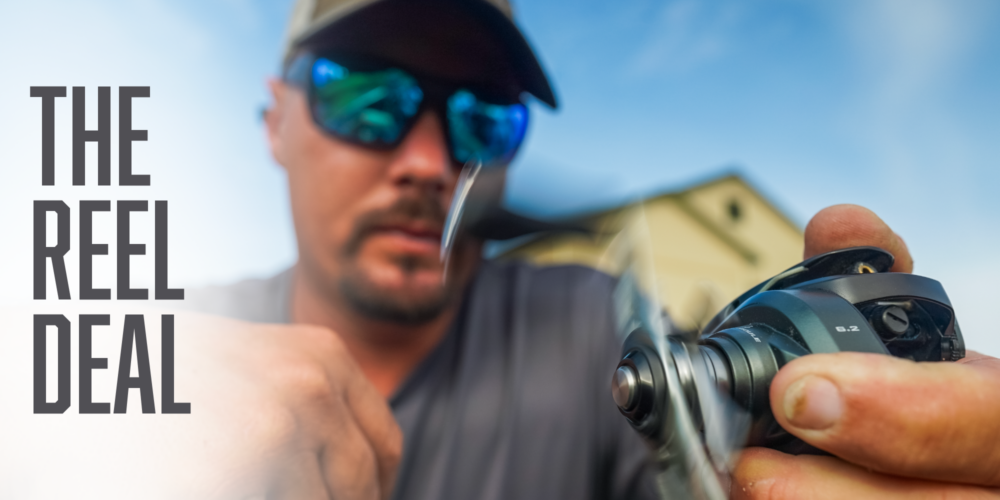 Three minutes. That’s how long it took MLF pro Alex Davis to realize the importance of taking care of his reels.

A few years back, the Alabama veteran was doing a video shoot with one of his sponsor companies. During the shoot, one of his reels was making some noise, which would’ve been no big deal on most days. He really didn’t even truly notice the noise, as he – like the majority of us – just assumed it was an older reel and older reels eventually make a little noise or don’t work as smoothly as they did fresh out of the box.

Fortunately, that day’s sponsor was Shimano, and one of the guys on the trip was Dan Thorborn, who heads up quality control for Shimano reels.

“Dan mentioned the noise and said that when we get back to my house he’d fix it,” Davis said. “I just thought, ‘OK. He must have a bunch of new parts and stuff.’ Nope. He just taught me how to clean it. It took him three minutes, and after he did it, that reel was like new money. That was eye-opening.”

Like everything else, reels have come a long way over the years.

What once was a clunky casing of metal with a knob and spool is now a precision instrument. That allows for better performance than ever before – longer casts, more cranking power, the ability to skip or flip with ease – but it can also have its drawbacks.

With modern reels being built with such strict tolerances to maximize performance, the littlest thing can throw off those tolerances. That’s where noises and roughness start to happen, which eventually leads to the reel not holding up.

And if you think you take care of your reels and surely they’re clean on the inside, guess again.

“You don’t realize how much stuff gets in your reel,” Davis said. “Pollen in the spring. Grime from water. Driving down a dirt road to get to a ramp is horrible for your reel because all of the dust in the air. Even grass gets in. How, I have no idea, but it does. They’ve taken mine apart and found pieces of hydrilla on the inside. That’s obviously a big problem, but even the littlest piece of dirt or grime can be hell on a reel.”

That’s where regular maintenance is huge for keeping your reels working properly and allowing them to last for years and years.

How often you need to perform said maintenance depends on the brand of reels you buy and your style and amount you fish. Davis says if you’re a hardcore angler, performing reel maintenance at least once (if not twice) a year is imperative. As for the more casual angler, once every two years should be fine.

“I’m talking about doing things that take out small roughness and noise,” Davis said. “If it’s clanking, it’s something major. Send that back. A good rule of thumb is if you have to start taking screws out, send it back. Never do it on your own, ever. You don’t know what you’re doing. There are so many gears, washers and springs. Then a spring goes flying and you have to find it and then don’t know where to put it back. Don’t bother with that.”

How does this miraculous three-minute reel tuneup work?

2 & 3. From there, take the side plate off your baitcasting reel and remove the spool. Put some alcohol on a Q-tip and use the Q-tip to clean the spool shaft. After that, use a Q-tip to clean each edge of the spool.

4. Next, try to clean every tight place you can without taking the reel apart. The goal is to get any dirt and grime out of the reel, while also removing old oil and grease.

5 & 6. Move to the worm gear (the grooved part that allows the line guide to go back and forth) and use a little bit of alcohol on a Q-tip to get all the old grease off. Once that’s done, give it all a second for any remaining alcohol to evaporate.

While still working on the worm gear, hit that with just a little grease (see box below), then put one drop of oil on the spool shaft, using the Q-tip to rub it around. Another drop can go on the edges of the spool. Again, rub it around with a Q-tip so there’s an even, light coating.

And after that, you’re done. Seriously, that’s it.

“It’s pretty much night and day,” Davis says of his reels before and after this quick maintenance routine. “As long as there’s no internal issue like a gear or bearing, this simple cleaning makes your reel work brand new again.”

If a little oil or grease can do wonders to smooth a reel, surely a lot can make it even better, right? Actually, no – it’s the opposite.

Davis learned that the hard way the first time he tried to oil and grease a reel himself.

“I probably used the entire bottle of reel oil,” Davis admits. “I went out the next day and that thing would not cast at all. I mean, it was just locked up. I sent it in, and when I got it back, the bill showed everything they did, but someone had also written, ‘Next time don’t use so much oil and grease!’

“I found out later that over-greasing or over-oiling a reel is almost worse than dirt. If you use too much, it won’t let the reel be free and the tolerances will be too tight for the reel to function.”

You might have noticed that this article is focused solely on baitcasting reels, which is helpful, but it also neglects half the reel population – spinning reels.

“Don’t touch spinning reels,” Davis warns. “Send them back to the manufacturer, pay your $30 and wait two weeks. They’re just too finicky.”

Still, it’s important to understand that if you take care of your gear, it’ll take care of you. Even a little TLC can go a long way toward keeping your reels – and everything else – working for you for a long time.