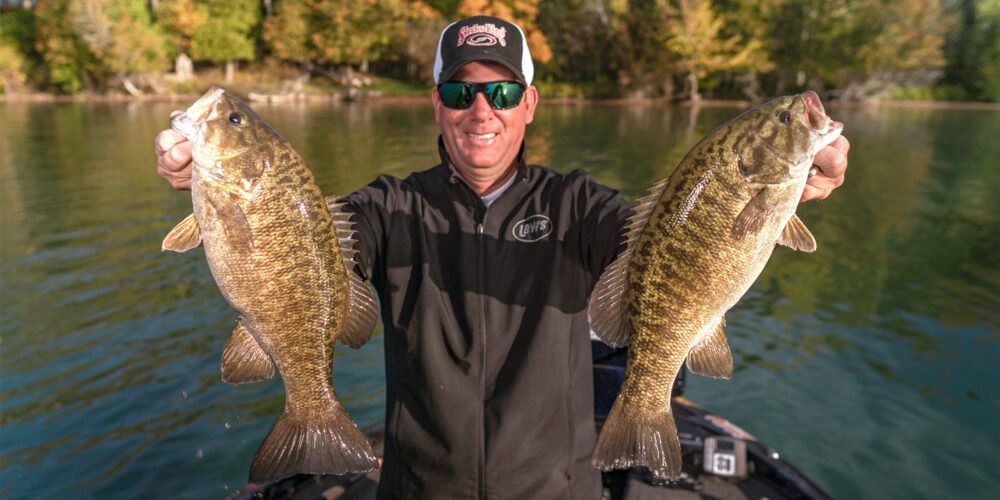 Kevin VanDam knows a thing or two about what it takes to be a successful power-fishing pro. Photo by Brad Richardson
January 26, 2020 • Mike Pehanich • Major League Lessons

The name Kevin VanDam is synonymous with power fishing. And VanDam’s historic success hinges largely on his ability to cover water with uncanny quickness, the essence of the “power fishing” concept.

But VanDam’s approach to fishing is more about adaptability and versatility than allegiance to any style of fishing or battery of techniques. His ability to strain water, shallow to deep, in a hurry is what separates him from the pack.

Doing it His Way

VanDam’s approach to drop-shotting is a prime example. He has adapted this “finesse” technique to his aggressive style of fishing without forsaking its unique virtues.

“You have to be versatile and do it all, without a doubt, but I really love a drop-shot,” VanDam admitted as he demonstrated the rig’s effectiveness on Michigan smallmouth during a fall outing. “You can fish it in the wind, and it gets down to the bottom in a hurry. You have that weight down below, which gives the bait a ton of action. Then, when you do get a fish on, he’s got nothing in his mouth but the plastic. There’s (no additional weight to give him leverage) to throw it. When you are catching big smallmouth, anything that enables you to land a few more is definitely a benefit and a plus.”

As VanDam admitted in a recent blog, you can shed the notion that his drop-shot rod is one he grabs reluctantly when conditions demand that he slow down. Sure, he’ll do so when conditions or bass mood dictate. But mainly he drop-shots – or, in his words, “power-shots” – because this versatile rig flat out works.

“The drop-shot is a bait I have tied on wherever I go because it is so efficient,” he said. “It’s one of the unique ways – especially for clear water lakes – to cover water everywhere from shallow to deep – and fast. It gets the bait down in a hurry. Yet you still can make a very ‘finesse’ presentation with it.”

Indeed, the drop-shot rod seems a far different and more versatile tool in VanDam’s hands than in the hands of a finesse maestro. In fact, he’ll use it to trigger reaction strikes more often than to strain water during a shy bite or to tease the last stubborn fish from a school to bite.

“With this half-ounce weight, the bait gets down to 20 feet, 30 feet in just a few seconds,” he explained. “I shake it a few times and see if I can get a bite. Then I move on again. I can cover a ton of water this way, but if I do find an area (where fish are concentrated) I can work it slowly. It’s a very effective finesse presentation.”

Bait selection was critical with this approach. His was the Strike King 3.5-inch Baby Z-Too, a bait well-suited to power-shotting.

“On a long cast, I let it sink a little bit then tightline it that last little bit because that Baby Z-Too swims like a real minnow,” VanDam advised. “I want it to swim with a little tension that last little distance to the bottom. Then I am going to shake it three or four times, reel it a little and shake it again.”

That’s not his only manner of drop-shot presentation, he was quick to clarify.

“If I knew there were a bunch of fish on this edge right now, I would actually work it more, a lot longer, through the cast,” he said. “But right now I am really just bombing it around, trying to get close to a fish, knowing that if I get my bait around one, they are probably going to bite it.”

His setup is simple: a 7 1/2-foot Lew’s Speed Stick with a 3000 series Team Lew’s Custom Pro Speed Spin Spinning Reel and 10-pound braid to which he adds a 20-foot leader of 8-pound test fluorocarbon.

“I don’t have to worry about any twist with that small-diameter braid,” he explained. “I can really cast a long ways with braid and this long rod. It is really efficient. Up here with this clear water, you’ve got to make long casts.”

He’ll go to a shorter 7-2 rod – the same medium power, moderate action as his 7-6 – when fishing shallow water and a lighter dropper weight. His rod choice also changes in situations calling for a vertical deep-water presentation (think 50 feet of water on Table Rock Lake fishing standing timber 30 feet down.)

“For that I might use a short rod because I’m fishing what we call ‘video gaming,’ looking at the graph, dropping to the fish, watching your bait on your sonar…trying to talk those fish into biting,” he said.

The widest range of variation takes place on the business end, where VanDam shuffles baits and rigging styles when fish are slow to the take.

“Whether you nose-hook or use a finesse plastic or wacky rig, you can really adapt your overall presentation with a drop-shot a lot just by the bait you have on and how it is rigged,” VanDam said. “If I know a bite is super, super tough, I am going to wacky rig a 4-inch Ocho or little finesse worm. I might even wacky rig a Dream Shot, one of my favorite baits.

“But when I’m power fishing a drop-shot, I go with something that has a lot of wiggle, lot of quiver to it – a Baby Z-Too or a nose-hooked Dream Shot or even a Texas-rigged Fat Baby Finesse Worm –  something that is going to generate a strike from a fish in those tough conditions. What I’m trying to do is figure out the mood of the fish and give them something natural, yet give them a bait with action that is going to generate some extra strikes.”

He emphasizes that the rig is as effective in shallow water as deep.

“I throw it in 2 feet of water as much as I do 40,” VanDam said. “It’s a great presentation for all scenarios. It is something you have to have on wherever you go. Now every pro has multiple drop-shot rigs ready to go. It is a really good way to cover water but a really good way to catch fish when the bite is tough, too.”

For power-shotting, a ½-ounce tungsten dropper weight is fairly standard and the weight he used with his 7-6 drop-shot rod in water ranging from 10 to 40 feet for smallmouth along the grass edge and dropoffs in Michigan. For shallow-water drop-shotting, VanDam will employ a 1/8- or 3/16-ounce weight, always adjusting to need, using “just a heavy enough weight to keep good bottom contact and keep the line tight.”

In the end, VanDam often opts for his power drop-shot presentation over other worthy options like a tube or Ned rig because tailored to his style of fishing, it’s simply faster and more efficient.